Writer Gail Simone and artist Cat Staggs are masters of characterization. From Simone’s work on books such as Batgirl to Secret Six to Clean Room, it’s clear that she has a real interest in getting into the heads of her characters and how their inner workings influence their choices, something that’s not always easy to convey on the page and something not every writer can pull off effectively. As for Staggs, her work on books like Orphan Black and Smallville Season 11 mix photo realism with a comic book sensibility that make the character’s emotions pop out of the panels.

Simone and Staggs are bringing that depth of skill to their new Image Comics series Crosswind, debuting this Wednesday, centering on a hitman and a housewife somehow doing a body/soul swap and how they manage to navigate their respective new predicaments. Ms. Simone and Ms. Staggs spoke with me recently about the genesis behind Crosswind, what kind of headspace they have to occupy when approaching the series, and why staging and body language are so important to sell the idea behind the book. 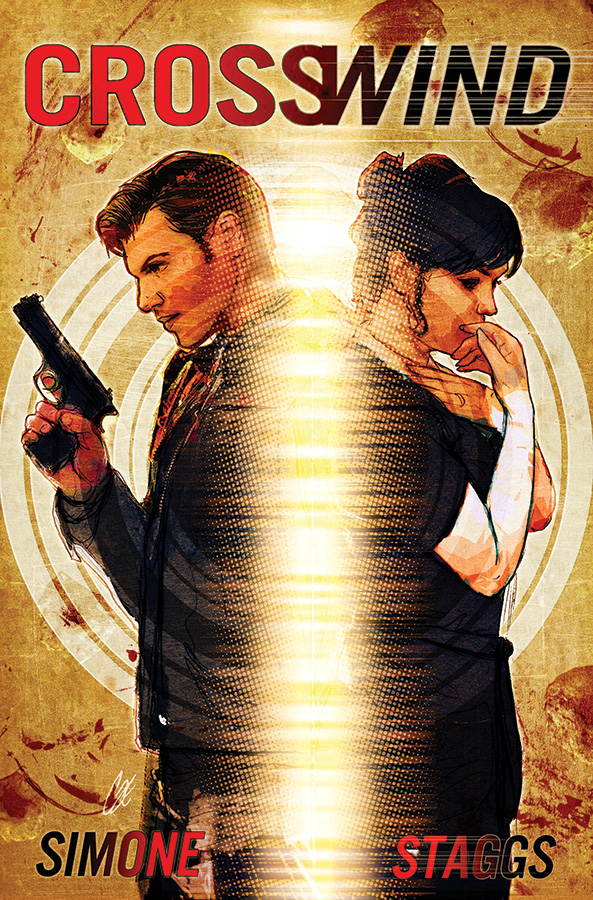 FreakSugar: For folks are considering picking up the first issue, how would describe the conceit of Crosswind?

Gail Simone: It’s a crime fantasy, the story of two completely different human beings (a slick Chicago hitman and a mousey Seattle housewife) who inexplicably switch souls and bodies, and on top of THAT bit of odd news, they have a killer hunting them both. It’s a genre I’ve always wanted to work in, and fortunately, I got the best possible partner-in-crime to do it with, Cat Staggs, who is nearly as messed up as I am.

Cat Staggs: Gail has written a beautiful maze of rabbit holes for me to draw. It is really a dream project.

FS: The main characters, Juniper and Bennett, despite being from different worlds, are maybe more similar than they might seem on the surface. Is that something that we’ll see play out as the series progresses?

GS: Oh, absolutely. We currently seem to be going through a period where broken people are trying to equate empathy with weakness, and that’s a very damaging concept to introduce to any civilization. Two wildly different people still have more in common than in dispute, but that’s not something we ever want to really admit.

CS: They, like us, are just trying to get through their lives, but cannot always see the harm right in front of their face. Sometimes we need a fresh pair of eyes to show us we might be in trouble and to help us navigate a better future. 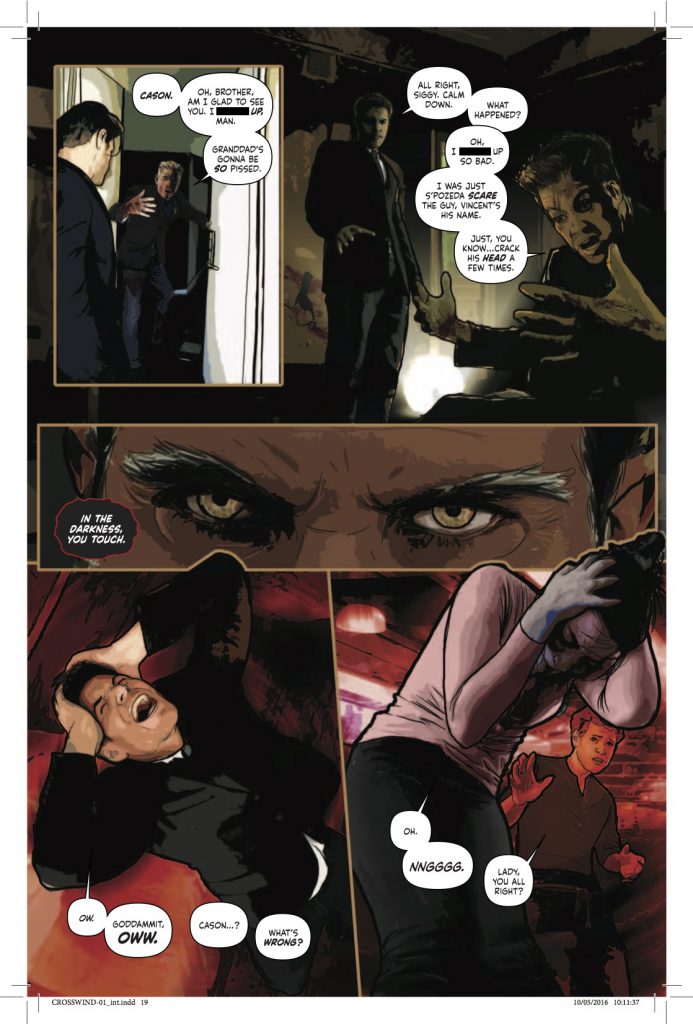 FS: Following up on that, the two are some of the most fleshed-out characters I’ve seen appear in a comic in quite some time—and considering it’s the first issue, that’s even more of a feat. Were they based on or inspired by people you know or have encountered?

GS: That’s a great question, and I had to give it some thought, and I think it may have been inspired by a brief time where I worked as a salesperson at a very high-powered real estate development. There were these very high-energy, high confidence sharks working there, they literally seemed to soak up respect for baffling reasons, they had extreme confidence in everything they did. Then there were also those who just could not show any confidence, who would cry in the bathroom between clients (and it was not strictly a matter of gender, either, both types were men AND women). That was very eye opening to me, the different self-confidence makes in how the world treats you. The world comes down HARD on people who show vulnerability.

CS: In working on the Juniper side of the story, I pulled from my own experiences from a time I was in a very unhealthy relationship. I am working to convey the emotions I remember feeling at the time. Some of this is a little cathartic and in some cases satisfying. Cason’s side is that confidence we sometimes aspire to have but don’t realize it has its own set of ups and downs.

FS: I’ve read that you two have wanted to collaborate together for some time. Besides the fact that you’re both phenomenal, what that drew you to each other as creators?

GS: For me, on a book like this, an artist like Cat was not just a wish, it was a necessity. It’s people in street clothes, showing emotions, having conversations. It’s amazing how many big name people can’t draw that. Cat can like no one else.

CS: Gail was writing it. Seriously. Gail is such an amazing character-driven writer, so this was a dream. I have been a huge fan of her work forever. Her writing is so nuanced and gives me so many layers to work with as an artist. I feel a little spoiled. She also has such a fantastic dark sense of humor and such a fantastic sense of timing. It really is a joy to work with, Gail. Honestly, I could gush forever and I am constantly pinching myself. 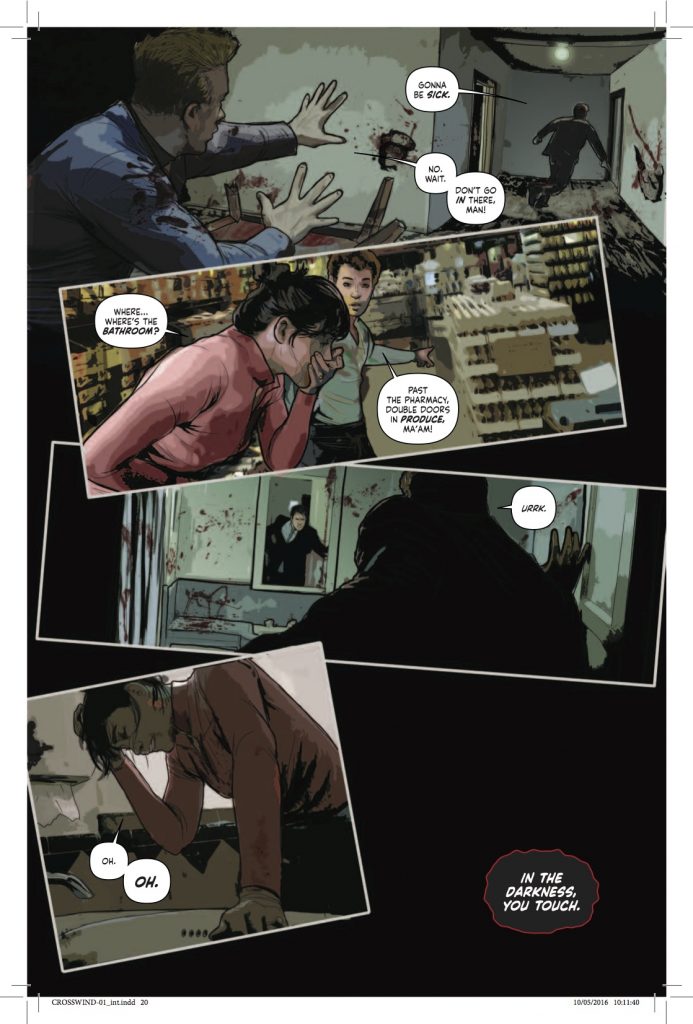 FS: To work on a book like this, is there a particular headspace you need to be in before diving in?

GS: Yeah, you have to be willing to be awful, but I’m in that headspace pretty routinely, so that’s nice.

CS: Working on this book is like the best therapy session.

FS: The composition of the first issue is gorgeous, not just in the photo-realistic art style but also how the page layouts mirror the characters’ frames of mind. Was that something you discussed when coming up with a game plan for the series?

GS: I did a BIT of layout suggesting but when you have a great artist, really, for me, the best thing to do is not get in her way.

CS: I definitely wanted to use the panel layouts and colors to reflect what was happening to each of them. 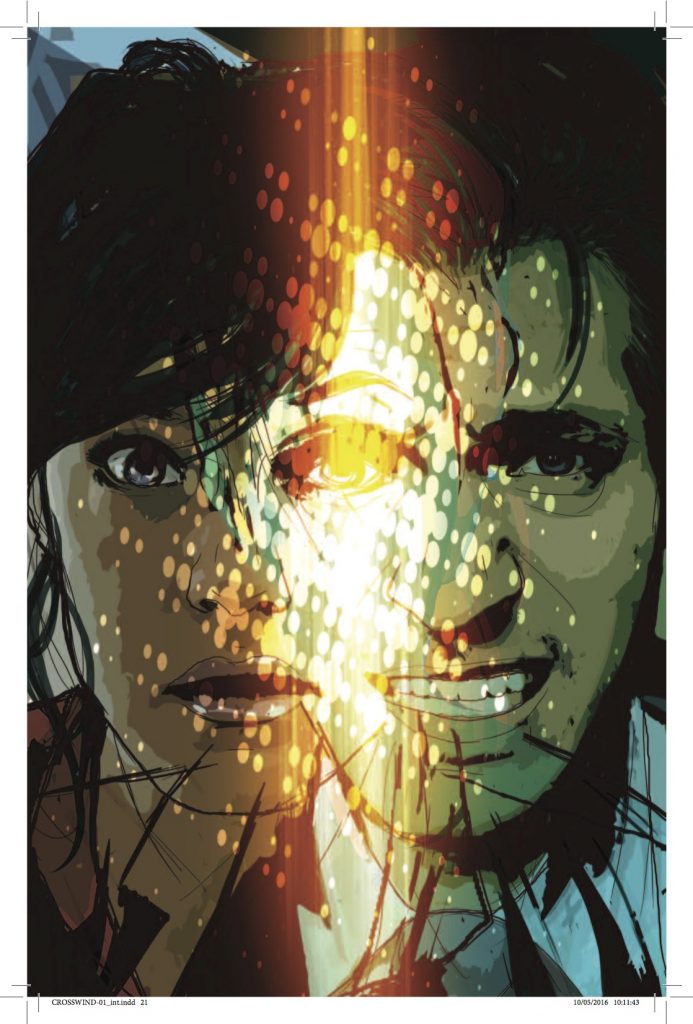 FS: Following up on that, what was the discussion like on deciding on how you wanted the characters to look?

GS: Quite a LOT, both the characters have to have a lot of visual charisma for the story to work,and of course, Cat brought that. They did evolve as we developed the concept, though.

CS: Yes. When we first started talking we worked out some early drafts of what each one would look like. As the story concept really developed, so did the character designs.

FS: Were there talks about even things like body language and how they carry themselves?

GS: OH MY GOD SO MANY TALKS. This was THE essential art element. The characters had to carry their personalities in their body language, and THEN they had to switch, so that is VERY difficult to write and a thousand times harder to draw and we still loved it.

CS: Body language was one of the most important elements for me to work with. I made a list of characteristics and mannerisms for each of them and carried those over once they switched. I pretty much check off with each panel. I can’t just draw the same man once Juniper has switched into Cason’s body. She is the one in control and his physical self has to reflect that and visa versa. 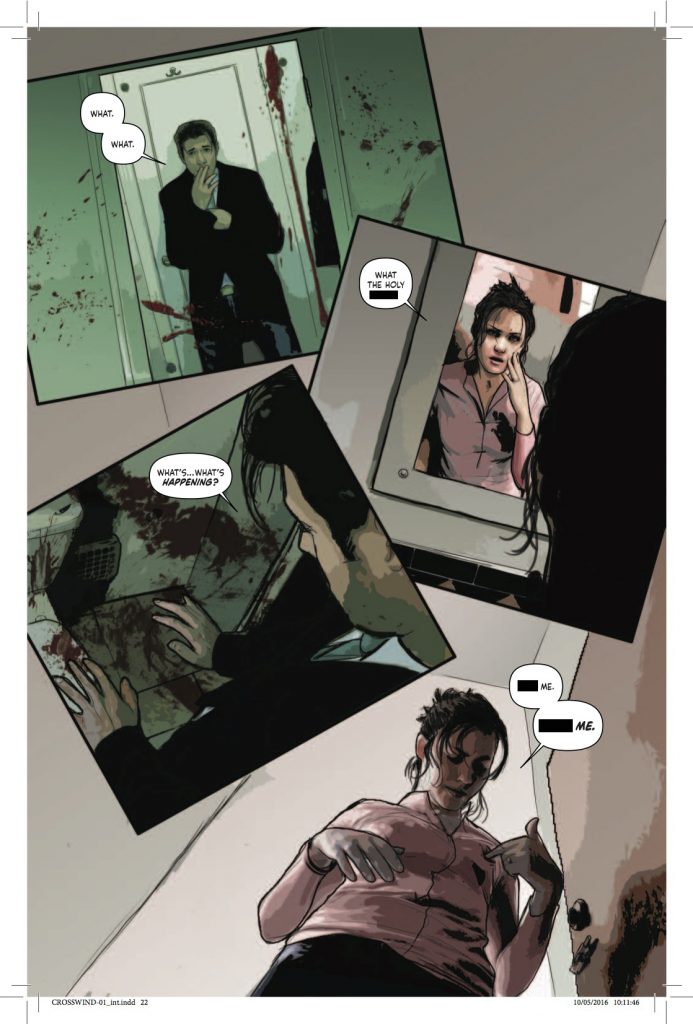 FS: What would you all like to tease about what to expect in Crosswind #1?

GS: Just that this is a story unlike anything else on the racks today, I think. It’s murder and hiding bodies, and it’s also making dinner and cleaning house. I love that mix, it’s just a joy to see on the opposite pages.

CS: It is a wild ride on the roller coaster of the human condition. Something you definitely want to buckle in for the long haul.

FS: Are there any upcoming projects you’d like to tease coming down the pike?

GS: I just announced Wonder Woman/Conan today, which I am writing, with Aaron Lopresti drawing, and I have the all-ages Wonderfall book coming shortly, with art by the magnificent Walter Geovani. Fun stuff, you need all of them, it’s kind of mandatory.

CS: I have a series of covers out now for Orphan Black and The X-Files: Origins. I will also have a short story, written by my wife, Amanda Deibert, in the upcoming John Carpenter’s Tales For A Halloween Night Vol. 3 as well as an exclusive cover for NYCC. I also have a piece in the upcoming The Thing 35th Anniversary Art Book available at SDCC. There are a few more things that haven’t been announced yet but they are coming.

Crosswind #1, written by Gail Simone with Cat Staggs on art, is on sale this Wednesday, June 21, from Image Comics.