Nintendo‘s little portable that could gets it’s silver anniversary today! Yep, 25 years ago the first of what would become a long line of fantastic mobile consoles was birthed for grubby gamer hands everywhere. Spawned from the brilliant and innovative mind of the legendary Gunpei Yokoi, the Game Boy quickly became the must have item for unbearably long car rides and interminably boring camping trips. Coupled with an addictive new puzzle game named Tetris, Nintendo’s system on the go instantly became digital meth. 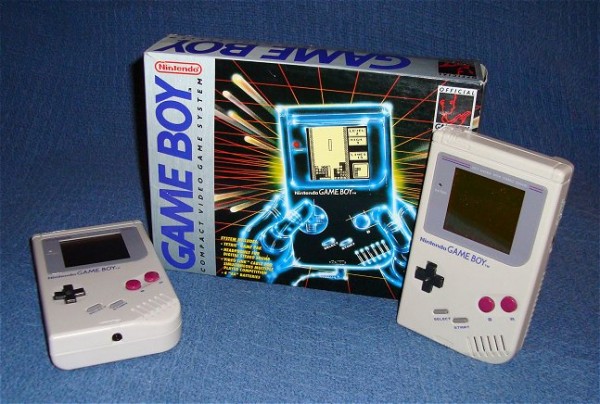 What made the Game Boy lightning in the pocket was its extraordinary portability. Succeeding against the powerful hardware of Sega’s Game Gear and the Atari Lynx — whose systems displayed fantastic colors and pushed more pixels, but ultimately fell victim to terrible power usage. The Game Boy, however, simply would not quit as Nintendo wisely put focus on portability with long lasting power. Additionally, the indomitable Game Boy was nigh indestructible boasting Nokia-esque durability. I once witnessed this ability firsthand when a friend of mine threw his GB into his Television, shattering the glass tube set in a smokey haze. He was mad at NES Jeopardy! for some reason (don’t ask).

In the end, it didn’t even matter that the system’s gray/green, four color palette display wasn’t as bright as the competition. Games such as the aforementioned Tetris along with Metroid II, and Pokémon proved almost too good while making the Game Boy a permanent fixture in any gamer’s arsenal.  So Happy Birthday Game Boy!