Artist Gavin Aung Than has been entertaining audiences across the Internet for years. Many of us know his work from his popular Zen Pencils, in which he paired his gorgeous cartoon art with inspirational quotes across the breadth of history. 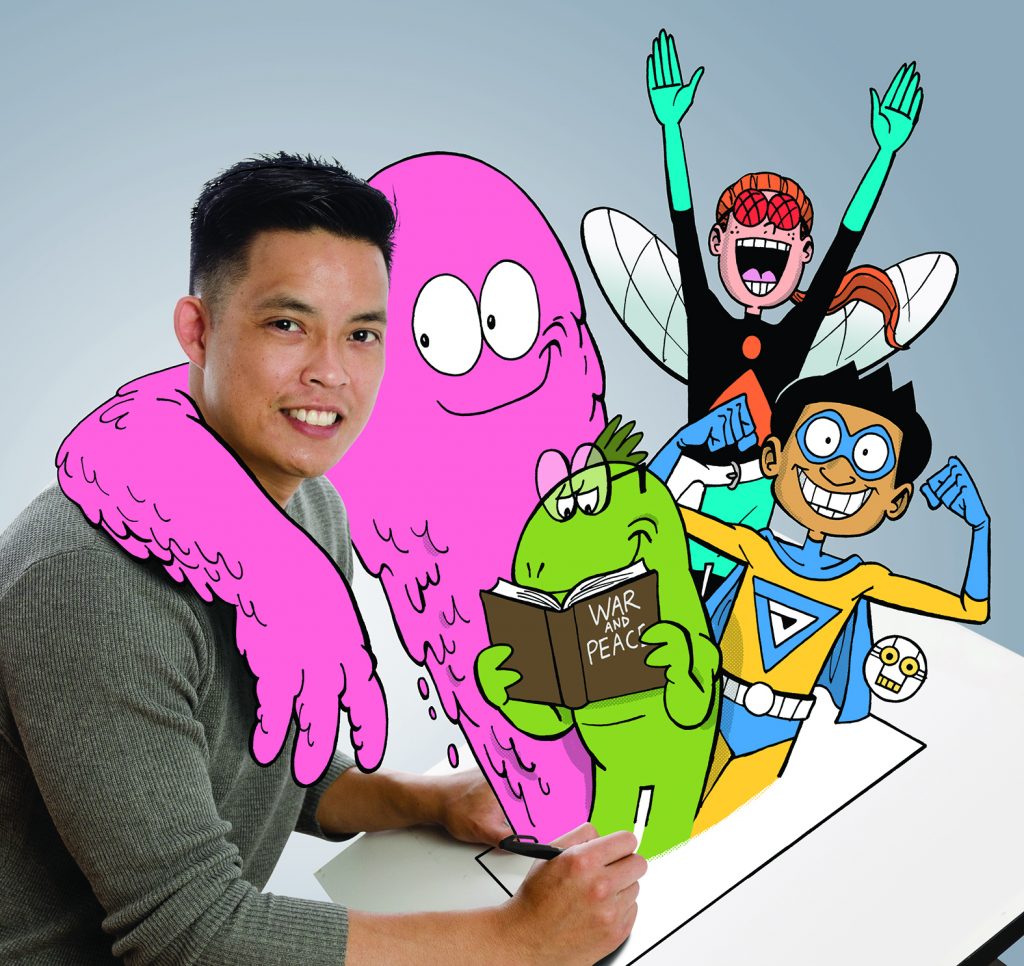 Creator Gavin Aung Than with some super folks

Now Gavin has moved on from Zen Pencils to a new project near and dear to his heart: Super Sidekicks #1: No Adults Allowed, which is now available from Random House Children’s Books. In Super Sidekicks: No Adults Allowed, sidekick heroes move out from their less-than-nice heroes’ shadows to form their own superteam. Gavin hopes to inspire the same love of comics in younger readers that he took away from the medium when he was their age.

Gavin Aung Than spoke with us recently about the idea behind Super Sidekicks #1: No Adults Allowed, what inspired the looks of the characters, how his work on Zen Pencils informed this project, and what he hopes readers will take away from the book.

FreakSugar: First of all, this has been a crazy 2020 with the pandemic and just everything. How’re you doing?

Gavin Aung Than: I’m well thanks. We’re in Perth, Western Australia, which has had the virus under control for six months. Life is pretty much back to normal here. We’re very fortunate to be where we are.

FS: For folks reading this, how would you describe the conceit behind Super Sidekicks: No Adults Allowed?

GAT: It’s a bunch of kid superhero sidekicks who are sick of taking orders from their adult partners, who are all mean jerks, and decide to run away to form their own team. It’s a fun, action adventure middle grade series for lovers of Dog Man, The Bad Guys, Captain Underpants, and HiLo. 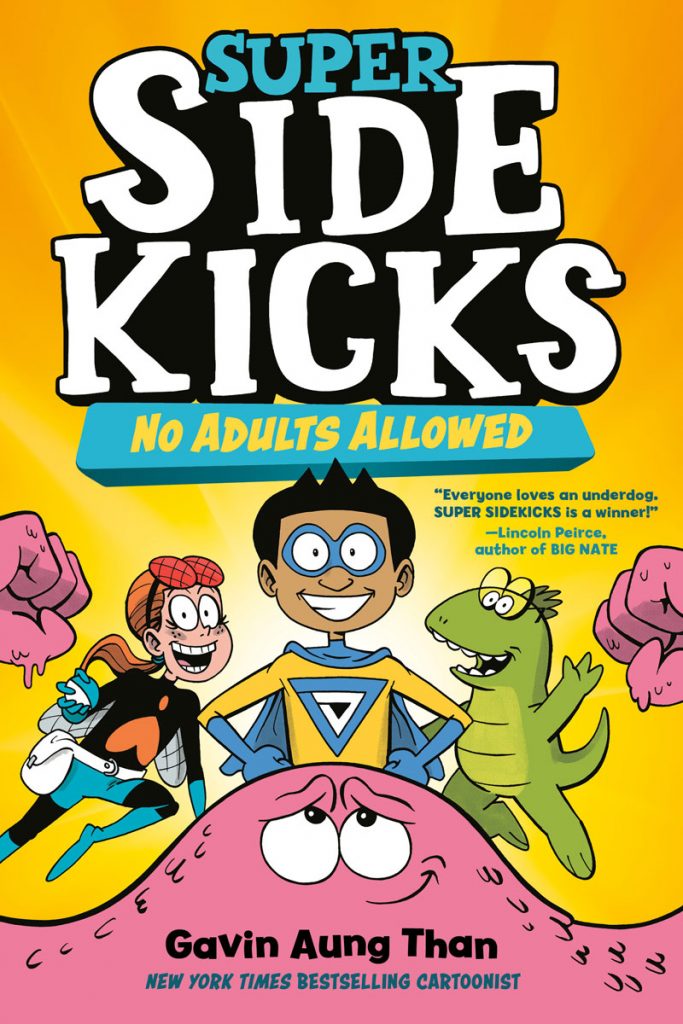 FS: The preview pages are so much fun! How long has the idea for Super Sidekicks been gestating?

GAT: I first pitched the series at the end of 2017 and it was first published in Australia in 2019 as a black and white book. But the US release is bigger and better, literally, it’s a bigger size format and is now in full colour, so I think it’s finally been given the treatment it deserves.

FS: The designs of the characters are so distinctive. What was the inspiration behind their looks?

GAT: Thank you! Yes, I wanted them all to look very different. The leader, Junior Justice, kind of looks like me. Flygirl’s costume is inspired by a fly (obviously), hence the black suit and red goggles. I love drawing dinosaurs, so I created Dinomite, a cute dino dude who can transform into any dinosaur. Finally, Goo, was inspired by my daughter’s love of slime, so I thought why not create a character made of slime who can shapeshift into anything!

FS: Following up on that, what were some of the influences that might have impacted your story?

GAT: I loved superhero comics growing up so that’s the main influence: stuff like X-Men, Fantastic Four, and The Avengers. But I also loved funny comics and strips like MAD Magazine, Calvin and Hobbes, and Garfield, so I’ve tried to inject some of that humor in the series too.

FS: You’ve been an artist for several years. (I discovered you through Zen Pencils.) How do you feel your past work has informed this new book?

GAT: It informed me in so much that I wanted to do something completely different. I spent six years forking on Zen Pencils full-time, which is for an older audience and more inspirational and thought-provoking. I felt it was time to try something new and make comics for kids. 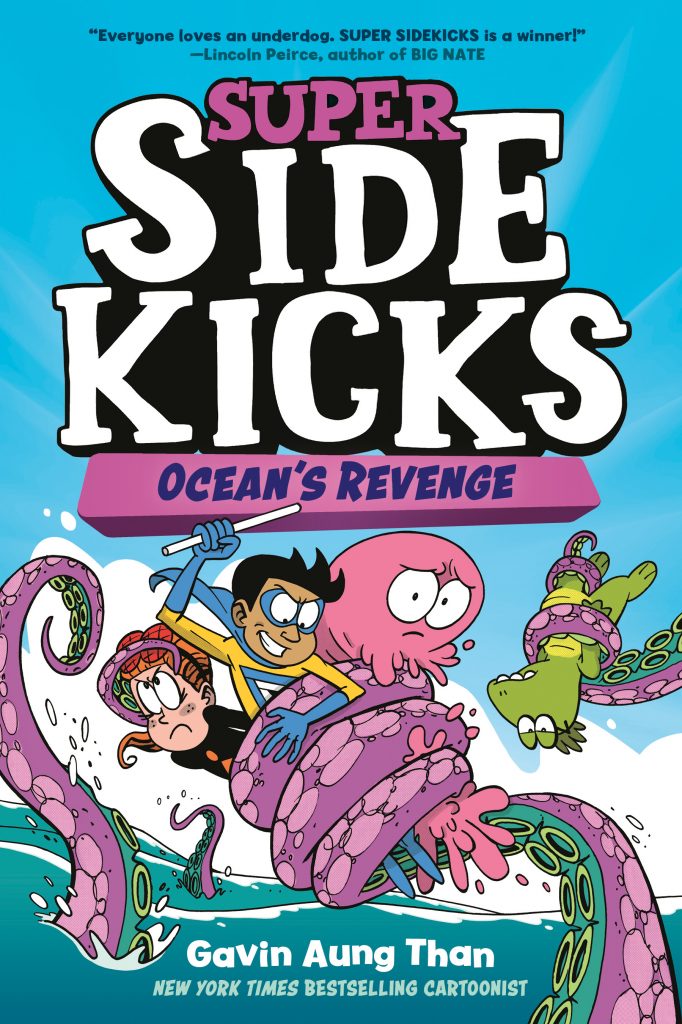 FS: Beyond being entertained, what do you hope readers take away from the book?

GAT: I just hope kids love the series, the characters and the fun! I hope it gets them hooked on comics like I was in middle grade. Comics really gave me a love for reading, art and pop culture that I still have today. For my work to have that effect on a middle grader would make me very happy.

FS: Can you tease what we can expect to see in Book 2?

GAT: Sure. After the Super Sidekicks meet each other and go on their first adventure in Book 1, Book 2 sees them face their first real test. The Mother of the Seas is sick of all the pollution humans are pouring into the ocean and decides to take revenge on humanity. It’s up to the Super Sidekicks to stop her! It’s a real fun adventure 🙂 “Ocean’s Revenge” will be out in the summer 2021.

Super Sidekicks: No Adults Allowed is out now from Random House Children’s Books.