The proliferation of technology and the rapidity with which it has advanced in the last couple decades have alternately expanded and narrowed our world. While the Digital Age has broadened our vistas in ways that may have once seemed unlikely, consequently, it has brought us in closer proximity with one another. Technology has allowed us to share of ourselves and share and share again in ways not once possible.

Who we communicate with and how we communicate have been upended. Commerce has transformed and become easier than ever. Bits and pieces of ourselves are floating about in digital space and, once out there, never to be destroyed. Even as Sony is breached and Equifax is hacked and America’s elections are prodded, we hope and reassure ourselves that our deepest secrets are mostly safe and secure.

But what if our secrets weren’t secure? What if the entire world was doxxed? That’s the premise of writer Gerry Duggan and artist David O’Sullivan’s new series Analog, debuting this April from Image Comics. In Analog, the Internet is no longer trusted at all as a conduit to exchange information; instead, individuals known as Ledger Men are hired to transport secrets, often at their peril.

Mr. Duggan and Mr. O’Sullivan spoke with us recently about the idea behind Analog, the accidental timeliness of the series, and the influences that helped shape the book. 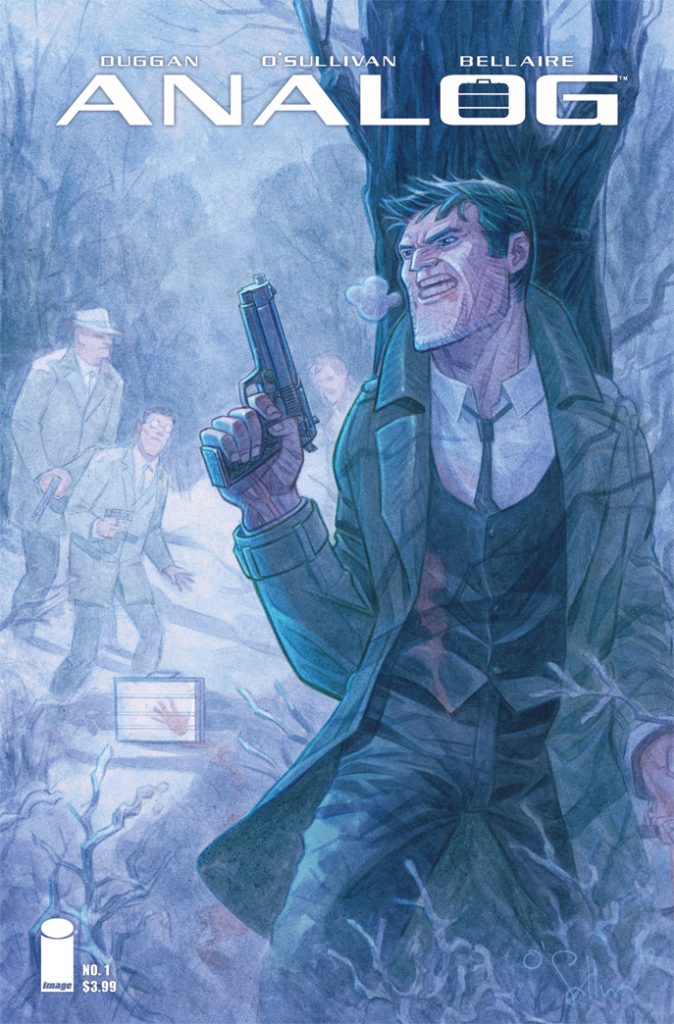 FreakSugar: For folks considering picking up the book, what is the conceit of Analog?

Gerry Duggan: It’s a future noir action comedy with some romance starring an armed courier and a vigilante that takes place after the world is doxxed.

David O. Sullivan: In the near future, the Internet is no longer a trusted way to transfer secrets. The Ledger Men are hired to transport these secrets armed with a case and a gun. We follow one such Ledger Man, Jack McGinnis, surviving his daily grind of been beaten to a pulp and shot at. Oona, Jack’s partner, a tough as nails lady with an unforgiven aim, helps Jack through some scrapes. It’s also got jokes!

FS: Jack McGinnis, the story’s through character, feels like an amalgam of old school spy and pragmatic Gen-Xer. How would you describe Jack and his motivations in the near-future world of Analog?

GD: I grew up without the Internet. I turned out relatively fine. Most of the people I know unplugging themselves are Gen-X. For whatever that’s worth. Most I know are instantly happier.  Look, from a writing POV: any time you can get rid of modern conveniences like mobile phones, you’re doing your story a favor. It’s more fun. That’s what we’ve done here.

Jack is former intelligence, and a current bar-hopping human punching bag that will move your paper from one place to the other. Jack’s an opportunist. He’s found a way to monetize the doxxing. He’s an in-demand guy if you can get hire him. 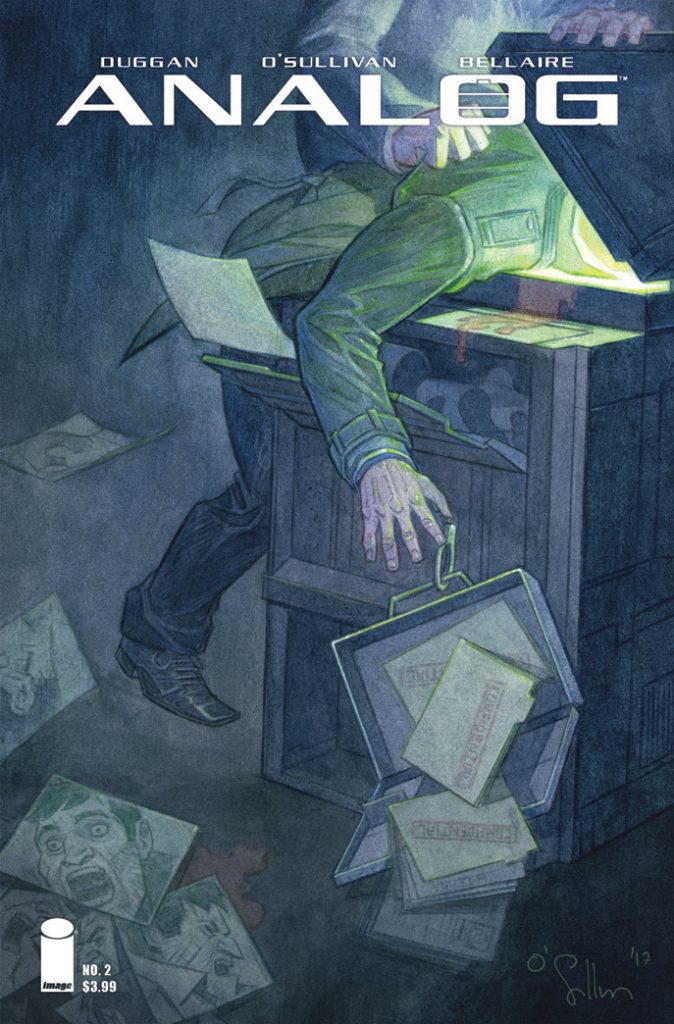 FS: The book follows the aftermath of “the great doxxing,” the result of which saw everyone’s secrets in the cloud come to light for all to see. The idea behind it is timely, especially in light of the various hacks of celebrity information and the Sony hacks. What was the impetus for you to explore this idea?

GD: It felt more out of left field when we began, but the world is heading where it’s heading. There are a lot of stories that have made their way to me about some of the surprising ways that organizations are pivoting back to Analog. They say the President doesn’t use email. That’s pretty interesting, huh? North Korea hacked Sony and thanks to Equifax there’s a one in three chance all your financials are in the wind. Those are some pretty big cracks in the dam. This just imagines life after the flood.

FS: Following up on that, Jack mentions at one point that Gen-Xers remember a time before the Internet and I was just talking to my coworkers about this very topic. We freely reveal information about ourselves every day online. We now have a generation who has never known life without the Internet. Do you plan on exploring how different generations coped with life after the great doxxing?

GD: I have mixed feelings about discussing different generations. On the one hand, I think there are obvious differences, on the other I think sometimes generational gaps are used to divide us. However, Gen-X was not digital natives. We remember high school without the internet. I can’t imagine how hard it would be to grow up and have every mistake etched on a permanent digital record. Dumphones are a tech trend now. I think and analog world is pretty seductive.

FS: The book balances spy tropes and mixes in speculative technological theory. What are your influences, either fiction or nonfiction, that might have moved how you approach Analog?

GD: I watch a lot of old films. They always influence me. Comics, too. I read comics from before the audience’s parents were born. We started Analog in 2015. Nowadays I just try to have fun and read as much of what I can about what world’s most horrible people are doing.

DOS: The same as Gerry, old movies and comics that capture the same feeling we want for Analog. 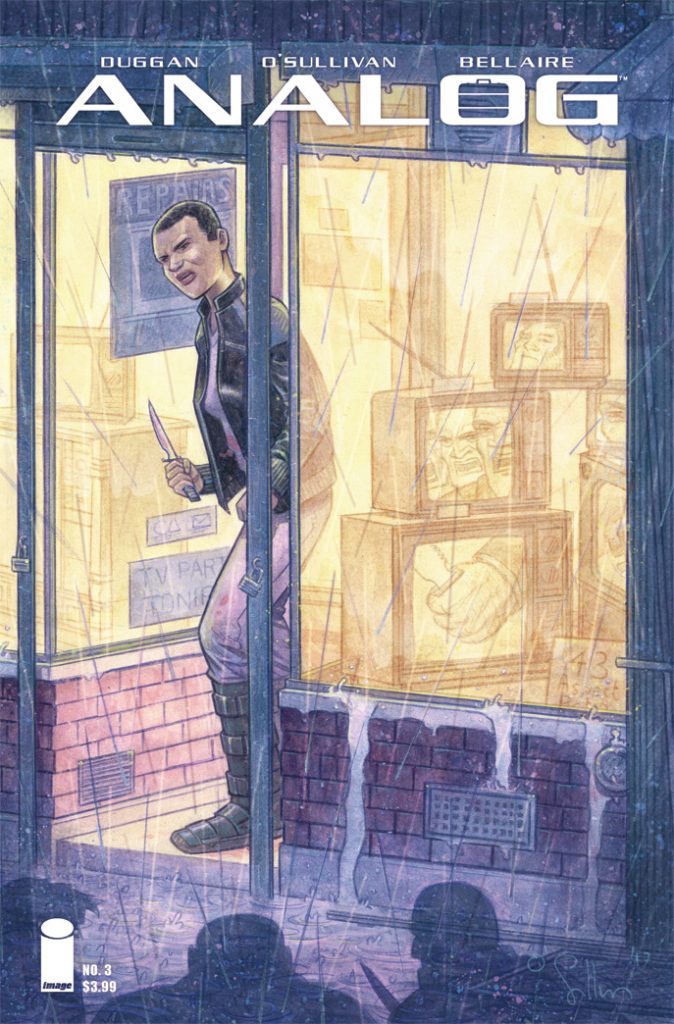 FS: The look of the first issue is a gorgeous mix of grit and noir. How did the two of you decide on what you wanted the feel of the series to be?

GD: Gotta give all the credit to David and Jordie here. David and I spoke a bit and then he got a script, and then he turned in wonderful thumbnails that looked like they were from an artist that was making comics for 10 years. His inks are sublime, and I want to shout out his painted covers. Very grateful he’s carrying me around on this. Jordie’s work speaks for itself. They’re a terrific pair, and they have so many different locations to make create. They make checking email a joy.

DOS: Gerry had a bleak vision of the world after the great doxing. Lives were ruined and there was social chaos, a dog eat dog kind of world. Gerry would suggest things in the script that would convey those feelings and I would try to inject that elsewhere when I could. This bleakness plays well against Jack’s sense of humor, cracking jokes as the NSA are cracking his ribs. Gerry manages to find some genuinely funny moments in a messed up world.

Jordie Bellaire’s work is amazing, her colors really capture that grit as well as some of the tender scenes. She really knows how to find the right color for the right moment.  Jordie’s colors and Joe Sabino’s letters are top notch, making Gerry and I look really good!

GD: I think two and three are fucked up, four is funny, five is a little of all of that. Some days I think it’s a ray of sunshine, somedays it feels like a death ray. Thanks for checking it out.

DOS: I thought I knew where the story is going, then I get the next script and I’m way off base, get ready to be surprised!

Analog #1, written by Gerry Duggan with David O’Sullivan on art, colored by Jordie Bellaire and lettered by Joe Sabino, is on sale Wednesday, April 4th, from Image Comics.

CHAPTER ONE Five years from now: the security of the internet has been totally destroyed. Secrets are no longer sent over the web, they’re entrusted to armed couriers called “Ledger Men,” like human punching-bag Jack McGinnis. He’s got a gun in one hand and a briefcase handcuffed to the other. Danger lurks around every corner, and Jack has to watch his back—because he had a part in the cyber attack that changed the world.

Get in on the ground floor of this new ongoing series and thrill as we slam Jack’s fist into the faces of spies, mercs, fascists, and eventually less punchable adversaries like a very grumpy artificial intelligence. From your new favorite artist, DAVID O’SULLIVAN, and GERRY DUGGAN, The New York Times bestselling author of such indie titles as Deadpool, Star Wars: Chewbacca, Guardians of the Galaxy, and Uncanny Avengers!