As a born-and-bred Kentuckian, I know firsthand that there is so much to love about the Commonwealth: the rolling hills, the people’s can-do spirit, the brimming hospitality… and now, the ebullient sparkle that is the opera-singing, cartoon-appreciating, positive-energy drag queen dynamo that is Gilda Wabbit.

Even if you’re not familiar with Ms. Wabbit, there’s a good chance you’ve seen her on the Internet, particularly early last year. A photo snapped of her and a Muslim woman on a subway, later captioned “The Future Liberals Want,” became a widely-shared meme, which, she says, affected her drag and her art.

But, as influential as that meme was for her and her visibility, there is so much more to Gilda beyond that viral picture. A product of the state of Kentucky, Ms. Wabbit took the lessons she learned from a lifetime of singing, as well as her pop culture loves, and applied them to her craft to become a confident, exuberant, and widely talented drag performer.

Ms. Gilda Wabbit spoke with me recently about how she entered the drag world, how pop culture influenced her aesthetic and persona, becoming an Internet meme, and her career goals and future projects. Her responses echo what we see in her art: fun, sweet, keenly intelligent, and incredibly insightful.

FreakSugar: First of all, thank you so much for speaking with us. How and why did you get into drag?

Gilda Wabbit: Thanks very much! I have had an interest in drag since I saw Season 4 of RuPaul’s Drag Race, but didn’t decide to do drag myself until much later. I had been working professionally in NYC as an opera singer, but I felt limited by the opportunities I was being given. I knew a queen named Sutton Lee Seymour who had an all live singing show at Barracuda, and I realized she made money performing and she had creative control over the show. I wanted to do that, and I started seeking out opportunities to perform in drag. My first show was a guest spot with award winning duo Brita Filter and Terra Hyman. The audience gave me a huge ovation after my number, and since then I’ve been hooked.

FS: I know you trained at the University of Kentucky. Are you originally from the Bluegrass State? What drew you to the college and how has your education and time there impacted your art?

GW: I was born in Louisville, so I’ve been a Kentucky girl from the start. The thing that drew me to UK was my voice teacher there, Dr. Angelique Clay. In high school, I went to a program called Governor’s School for the Arts where I worked with her. I knew I wanted to keep that relationship going, so I went to UK to study with her. My professors there really laid the foundation for my understanding of music and performing. My interest for opera and theater flourished there, and I certainly wouldn’t be the performer I am today without those four years of education. 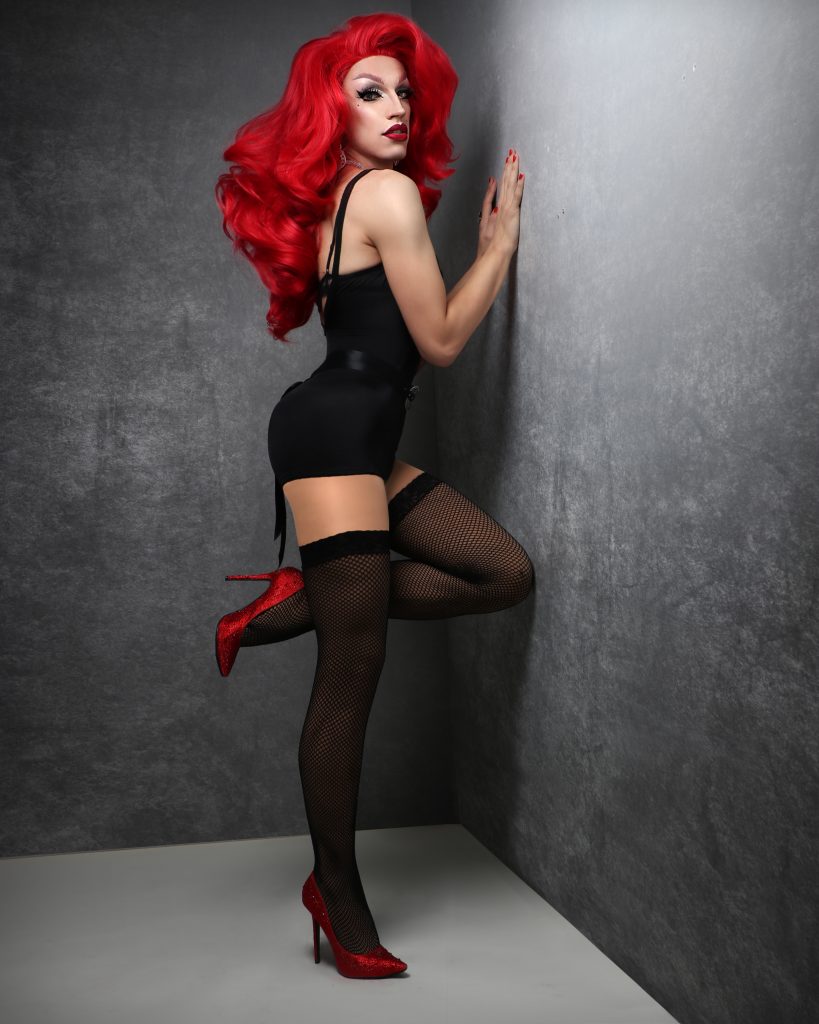 FS: Your drag name is amazing and a nice hat tip to Bugs Bunny and Elmer Fudd. I can’t say your name without wanting to belt out “Gilda Wabbit!” to the tune of “Kill da wabbit!” How did you land on that name? Was it with you from the beginning or did it come later on?

GW: I’ve had two other drag names before, but Gilda Wabbit came about as a bit of intentional rebranding. I wanted a name that honored my interest in classical music as well as my desire to be very silly on stage. I watch Looney Tunes and Merrie Melodies a lot, and stumbled across the “What’s Opera Doc?” episode and watched Elmer Fudd sing, “Kill da wabbit, kill da wabbit, kill da wabbit!” and it all clicked. Opera, Bugs Bunny, a touch of Jessica Rabbit and Rita Hayworth. It said everything I needed it to!

FS: Do you have any influences—in the drag world and out—that influence both your looks and your performances?

GW: I’ve definitely been influenced, look-wise, by many of my favorite red heads: Jessica Rabbit, Ariel, Daphne, Lucille Ball, Ann-Margaret. My performances are also influenced by famous red heads, most notably Varla Jean Merman and Lypsinka–two legendary drag queens. I don’t know what it is about my attraction to redheaded women, but it’s been a trend since the beginning. 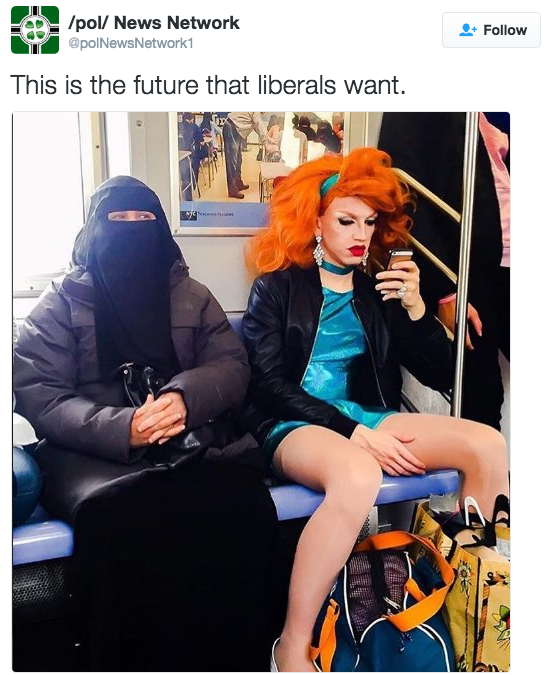 FS: You famously became an Internet meme early last year. What can you tell us about that: how you found out, the after effects, and how you feel about it personally?

GW: Honestly, “The Future Liberals Want” was such a surprise. I had no idea the picture was even taken, until my friends started tagging me in the post on Subway Creatures Instagram. Once the Alt-Right picked it up on Twitter, it went crazy. I was getting called from Buzzfeed, Vice, the BBC. It was wild, and I wasn’t prepared. But it truly helped launch my career. I’ve often said my life is a mish-mash of happy accidents, and I couldn’t be more grateful for the original photographer Boubah Barry.

FS: Following up on that, the United States has become so deeply divided in the past two years, more so than I ever remember seeing it. Has the reaction to the meme and the country’s climate affected your worldview at all? If so, has it affected your art?

GW: Oh, the meme wildly affected my art. My worldview hasn’t changed much, I’ve always been politically minded and interested in current events and social justice. However, the meme really inspired me to infuse my art with that. Drag has become, over the past two years, something more than a platform to look fierce and get attention. It’s become something that I can use to help those around me. Now more than ever, we need queer people in fabulous clothes to stop oppression and uplift the marginalized. I’m grateful to be a small part of that.

FS: You told me that you’re a huge horror, fantasy, and tabletop game fan. What are some of your favorite, go-to pieces of pop culture you find yourself revisiting again and again?

GW: Oh yes!! Let’s break it down into each of those three genres, shall we?

When it comes to horror, my all-time favorite film to rewatch is The Descent. Bad ass female characters, well-designed creatures, and fabulous cinematography which creates a moody, claustrophobic atmosphere. Don’t watch The Descent 2, though. They cast a bunch of men, lowered the budget, and ruined the whole thing. Other notable faves are the Cube films, Silent Hill, and the Resident Evil films. Give me beautiful visuals, interesting characters, and well designed baddies and I’m IN!

My interest in fantasy delves a little into horror as well. I love the Hellboy films and Pan’s Labyrinth, both directed by Guillermo del Toro and both featuring plenty of horror elements of their own. I also really enjoy fantasy novels, so works by authors like Ursula K. LeGuin, Garth Nix, C.S. Lewis, and Marion Zimmer Bradley always find their way into my Kindle app. Of those, I’ve reread The Mists of Avalon by Bradley and Out of the Silent Planet by Lewis over and over.

Tabletop games are always a fun time for me. I enjoy the ease of play with games like Munchkin, but really prefer the ability to craft fun and spontaneous stories using systems like Dungeons & Dragons and Apocalypse World. Much like drag, the ability to play another person for a period of time is so freeing and exciting. 10/10, would recommend to everyone. 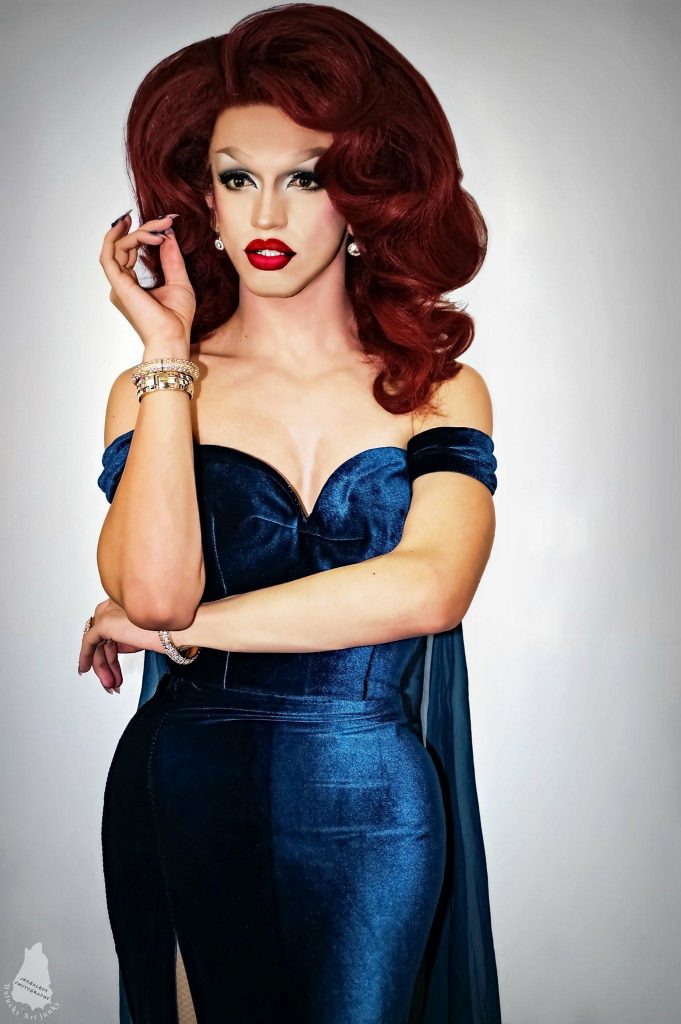 FS: Have your pop culture loves affected or impacted your drag?

GW: Oh absolutely, although mostly it’s my love of cartoons that has influenced my drag. Things like Sailor Moon where the characters transform into more exciting versions of themselves parallel my experience with drag almost exactly. And we’ve already talked about how Looney Tunes gave me my name! Can’t escape that influence ever.

FS: Do you have any current projects or future projects you’d like to talk about?

GW: All I’ll say here for now is that I hope to be touring a lot this fall, so keep an eye out on my schedule to see if I’m coming to a city near you.

FS: Do you have certain career goals you’re working toward?

GW: I hope to be doing more activism and public speaking, honestly. After a show, a friend of mine asked, “Do you think your singing voice is your superpower?” And my answer was a quick, “Not at all. It’s my personality and my ability to communicate with my audience.” Words have so much power, and I’m trying to point my compass in that direction. My look and my performances are a fun part of what I do, but I want them to be an invitation to the audience that says, “Come, sit a while. I’ve got things to teach you.”