Gisele Lagace is no stranger to comics or music. She’s an artist who has worked on a variety of music-themed books, such as Archie Meets The Ramones, as well as was a member of a rock band in the 1980s and 1990s.

It’s no wonder, then, that working on a book like IDW’s Jem and the Holograms would be a perfect fit. The artist has contributed a number of covers to several issues of the series, and she’s now helping usher out the comic with a bang by providing interiors to its final arc, starting this week with issue #24.

Ms. Lagace spoke with me recently about contributing to series’ closing story, collaborating with series writer Kelly Thompson, and how her music background has informed her art. 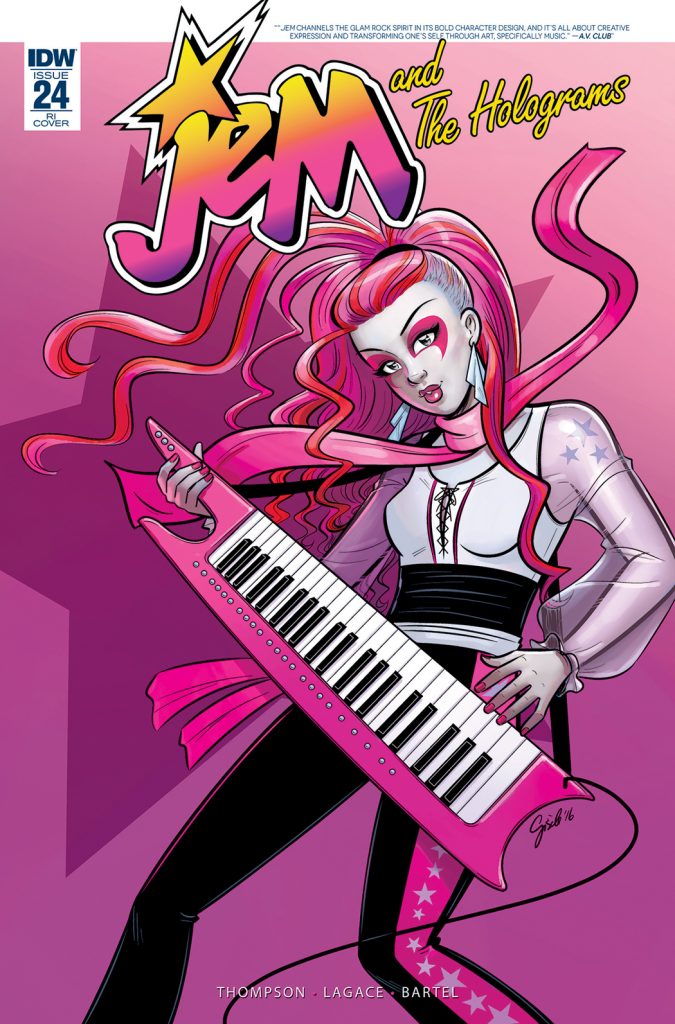 FreakSugar: I asked [former Jem artist] Sophie [Campbell] and [writer] Kelly [Thompson] this when I first interviewed them about the series, so I have to ask you, too: What are your memories of Jem? Were you a fan of the cartoon series?

Gisele Lagace: I remember Jem quite well. It was a fun show. I was in high school when it came out, and oddly enough, that’s when I was also honing my craft as a musician to later do an all-girl band of my own in adulthood.

FS: I know you’ve contributed covers to the series, but how did you become involved with providing art for the last arc of the comic?

GL: I was simply asked, and I said “Yes!” Having worked on other music-themed comics, e.g. Archie Meets Ramones & Betty Boop, I felt I could probably pull this off. 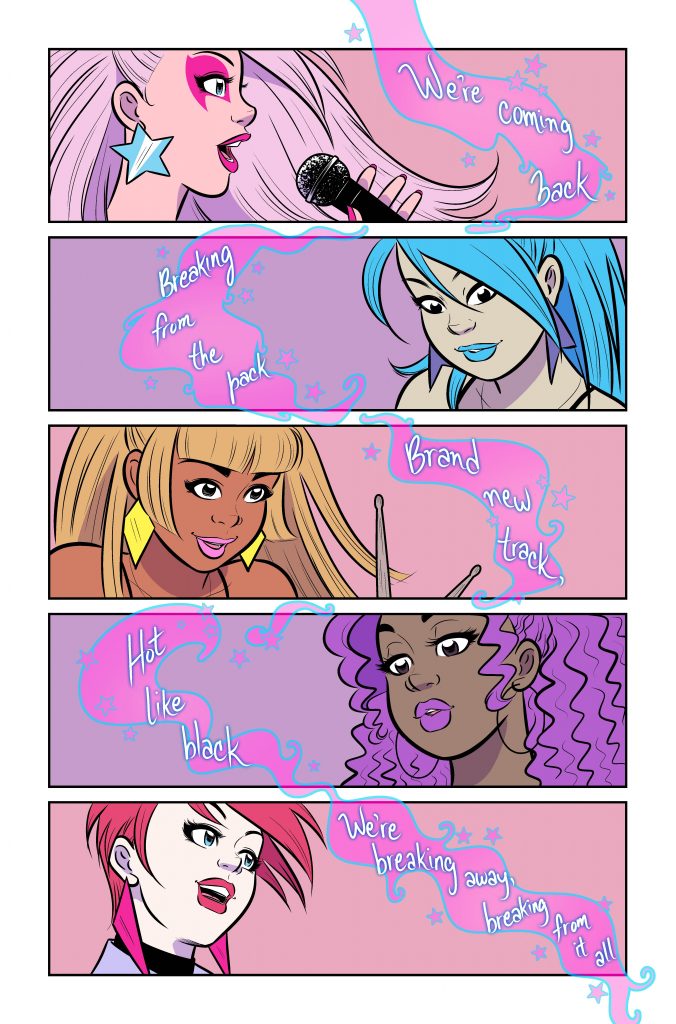 FS: How’s it feel to help usher out the series’ final journey?

GL: It’s nice! I’m really happy I got to be a part of this series. I hope I do it justice!

FS: Jem has such an ebullient, graphically interesting characters unlike anything we see anywhere else in comics. Was there anyone from the Jem universe you were particularly eager to tackle?

GL: Ha-ha! That’s a “choose your favorite child” question! In general, I like to draw villains, so getting to draw The Stingers in this arc was really fun; Riot in particular. He’s so over-the-top with the drama in his life! 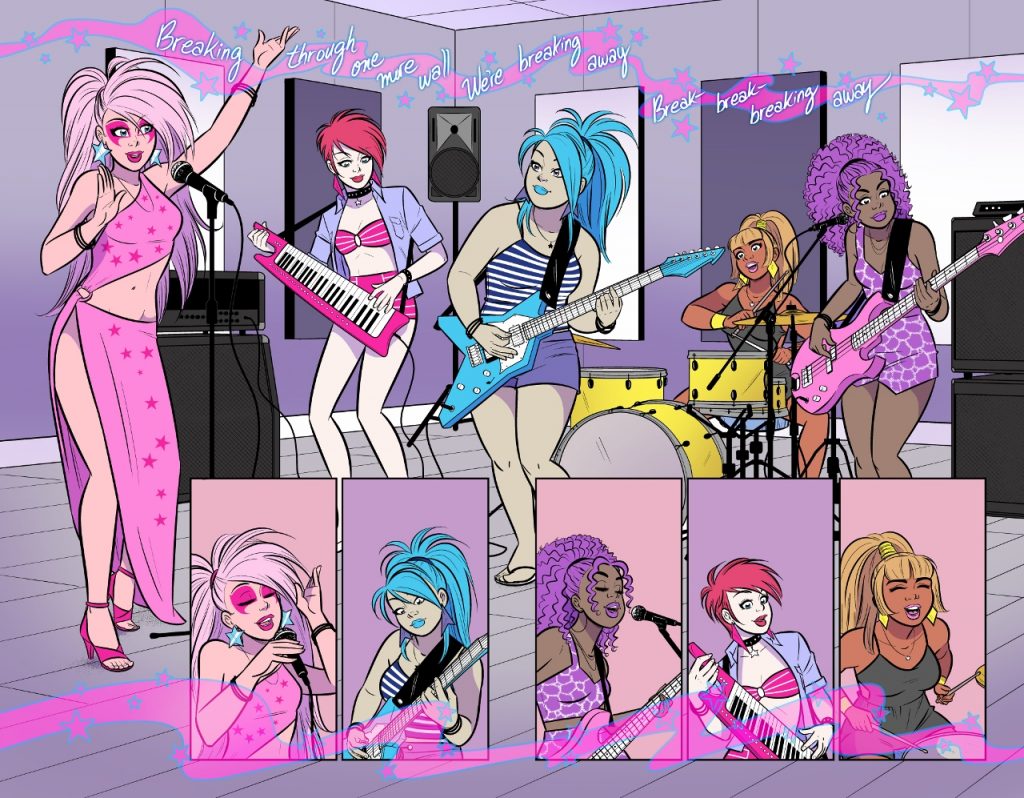 FS: Following up on that, the cast’s looks have changed so much over the 20+ issues of the series. Were there flourishes you wanted to add in the evolution of those looks?

GL: I mostly tried to follow what Sophie Campbell had set in place at the start of the series. It’s not an easy task, I can tell you that! I hope people enjoy my interpretation of it.

FS: Is there any particular music you listen to get you into the right frame of mind to draw Jem?

GL: Ha-ha-ha! Readers would probably be shocked to know that Jem was drawn while I binged The Walking Dead, and when I listened to music, it was usually Rammstein. Their music is great to boost my energy. 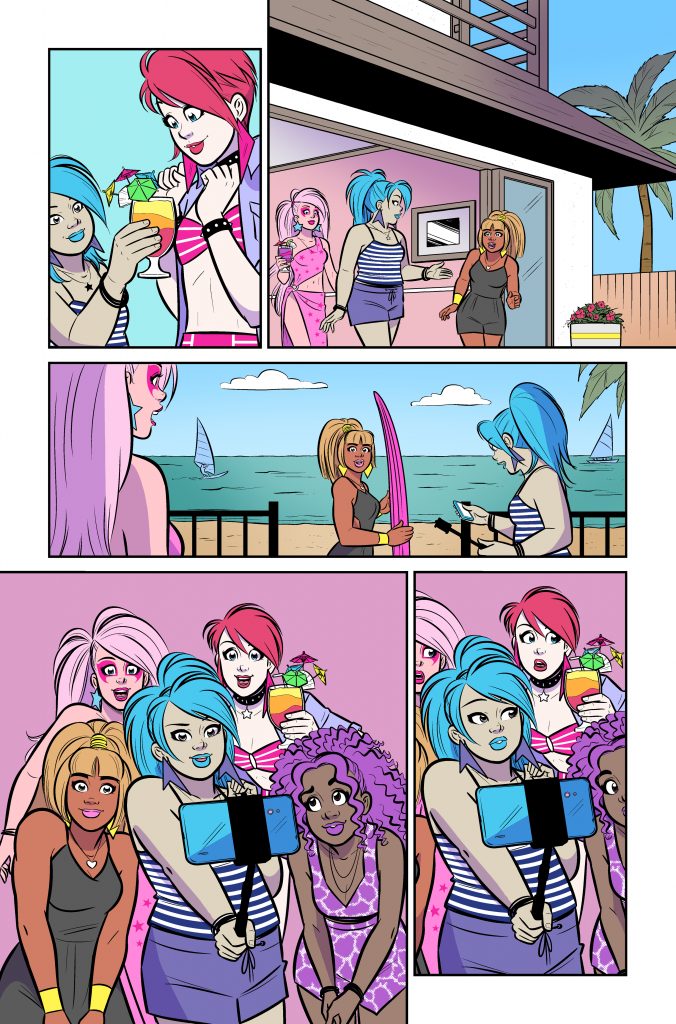 FS: Here’s a silly question, but it’s one I asked myself just now: If you could steal one of the cast’s looks, which cast member would it be? I’m going with Sophie Campbell’s redesign of Stormer. Her hair is amazing.

GL: Shana all the way! I like big curly hair, and her choices of instruments to play are right up my alley.

FS: What has been the collaborative process been like with Kelly? 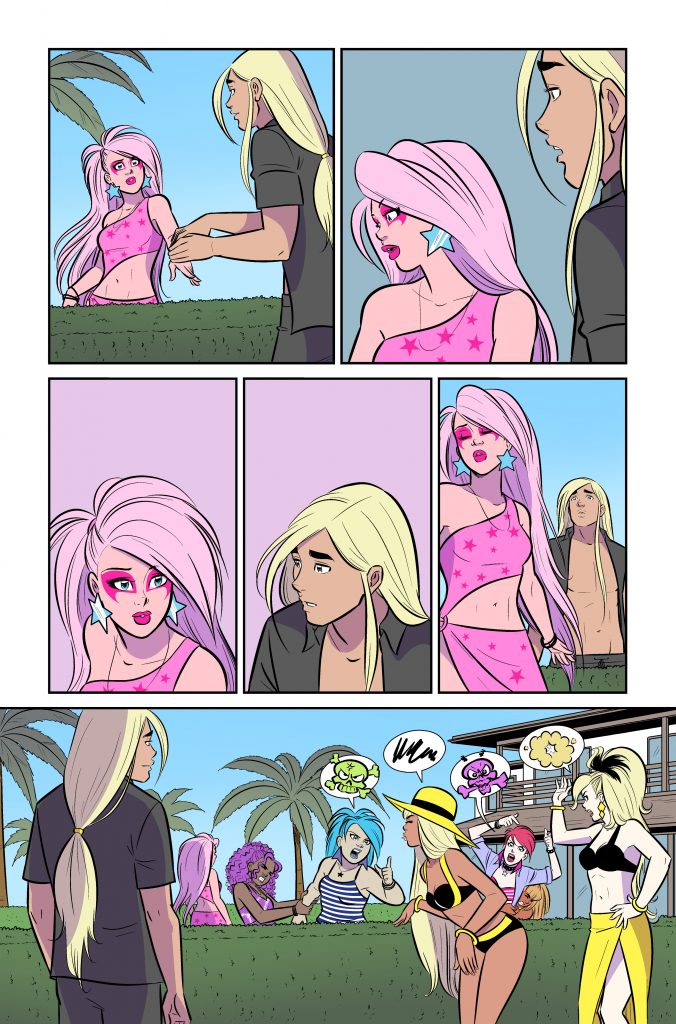 GL: I was into music big time growing up. I was buying KISS and Van Halen albums as young as 8 years old. My main interests were always a combination of music and comics, but by the time I was a teenager, my love for music took over, and it became what I really wanted to do for quite a few years.

In 1988, I moved to Montreal with my partner (who I’m still with, and also a musician) to try and make it in music (we were from a small town in New Brunswick.) Having been a big fan of Girlschool (a British all-girl band,) I decided to try and make an all-girl band of my own. I put ads up in papers, music & record stores to try and find band members. Within a month or two, I already had the first line-up. We went through a few band member changes, (even band name changes,) but eventually got signed for a record deal in 1991 as Barbarella, after performing on an American Idol-type show. It was a show where people in the music biz would invite newcomers to perform, and we got the spot, and that led to a record deal. I was more into metal music at the time but I knew that making a career in French in Montreal would require something a little softer, so I wrote songs that were a bit more radio friendly. Our producer helped me refine these songs, and our singer wrote lyrics to the melodies I had. The album also had two cover songs, one of which is “Lady Marmalade,” a familiar song to the English speaking world.

We ended up touring the province of Quebec and other French regions of Canada for a couple years. While on tour, I was reading comics to past the time, and over time, I think my love for comics came back again, and I picked up a pencil to draw again after so many years away from it.

I still own many guitars and bass guitars, and other related music stuff. I’m still a big music fan but I haven’t performed or been in a band in years. Drawing comics takes so much of my time, that I barely have time to play anymore. It’s a little sad ’cause I really enjoyed it, and I wasn’t too shabby! 😉

FS: Following up on that, a lot of your work has involved characters in bands. Are there any specific memories or feelings from your time in a band that you draw on when you tackle a new project?

GL: If it’s something I’ve written, I’ll certainly bring my own experiences to the table. I’m sure I could write a series just based off that. If I’m drawing something that someone else has written, and I feel something isn’t right, I’ll mention it, otherwise, I do the best I can with my knowledge of the field.

FS: After Jem wraps up, what projects can you talk about coming around the bend?

GL: Other than cover work and my own creator-owned projects (that I self-publish) I don’t have anything lined up for other publishers in terms of interiors. That could change tomorrow, though; you never know in this business! Best way to know what I’m up to is to follow me on Facebook/Twitter/etc. Links can be found at my website: giselelagace.com.

Jem and the Holograms #24—part one of “Truly Outrageous,” the final arc of the series—written by Kelly Thompson with Gisele Lagace on art, is on sale this Wednesday from IDW.