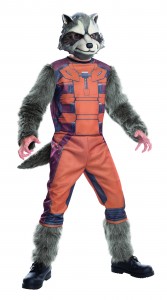 You’ve probably seen the Internet meme that says “Dress for the job you want,” accompanied by a picture of Batman. Well, the job I want is that of an anthropomorphic talking raccoon (hey, I aim high), and this fall, Rubie’s Costume Company is going to help make that dream a reality. This Halloween, Rubie’s is releasing costumes and make-up based on and inspired by characters from Marvel Studios’ new film Guardians of the Galaxy, released nationwide this Friday.

Rubie’s Guardians line will feature make-up and costumes from the movie’s key characters, including Star-Lord, Drax, Rocket Raccoon, and Gamora. (No Groot? “I am Groot!”, which is Groot for “I am sad.”). In addition to the costumes and make-up, Rubie’s is offering Guardians accessories, including Star-Lord’s gun, Rocket’s gloves, and Drax’s dagger. You can also get your hands on a Nova Corps officer uniform. (Best John C. Reilly cosplay ever!)

Side note: I would totally wear Rocket’s furry gloves about town just for the WTF stares I would inevitably receive. But probably not to work. *pause* Okay, maybe work. “Oh my God, I’m changing into a werewolf! Please don’t let it be a Twilight werewolfffff!”

According to Rubie’s press released:

Rubie’s is delighted to introduce these unconventional superheroes into our already prestigious line of Marvel characters,” said Howard Beige, Rubie’s Executive Vice President. “By continually expanding our repertoire of superheroes, we are able to stay on trend and offer a variety of costume options for children and adults to enjoy for Halloween or dress up throughout the year.

(See? The executive vice president encouraged folks to wear these costumes throughout the year. It’s like the universe wants me to wear the Rocket gloves about town. Done, universe. Done.)

As much as I love Rocket, the costume with which I am most impressed is Drax. The detail in the chest tattoo is impressive and shows the care Rubie’s has put into making these costumes. Really, though, the entire collection looks top-notch. Even Star-Lord’s mask captures the otherworldliness of the helmet Chris Pratt wears in the film.

If you’re interested in snagging one of these outfits (paw’s up right here!), keep an eye open on Rubie’s official site. You can also view their entire line of outfits based on the Guardians of the Galaxy.