DC Comics has been hitting high notes with each of their one-shot crossovers with classic Hanna-Barbera characters and that’s just as true with the Nightwing/Magilla Gorilla Special. A story featuring the former Boy Wonder and the dapper ape may not seem like a natural mix, but writer Heath Corson makes it sing, with elements of noir, a Big Lebowski vibe, and plenty of fun-poking and affection-showering toward the city of Los Angeles.

Mr. Corson spoke with me recently about the conceit of the Nightwing/Magilla Gorilla Special, why he chose to pair the two characters, the premise behind the tale, and how L.A. is integral to the yarn he wanted to tell. 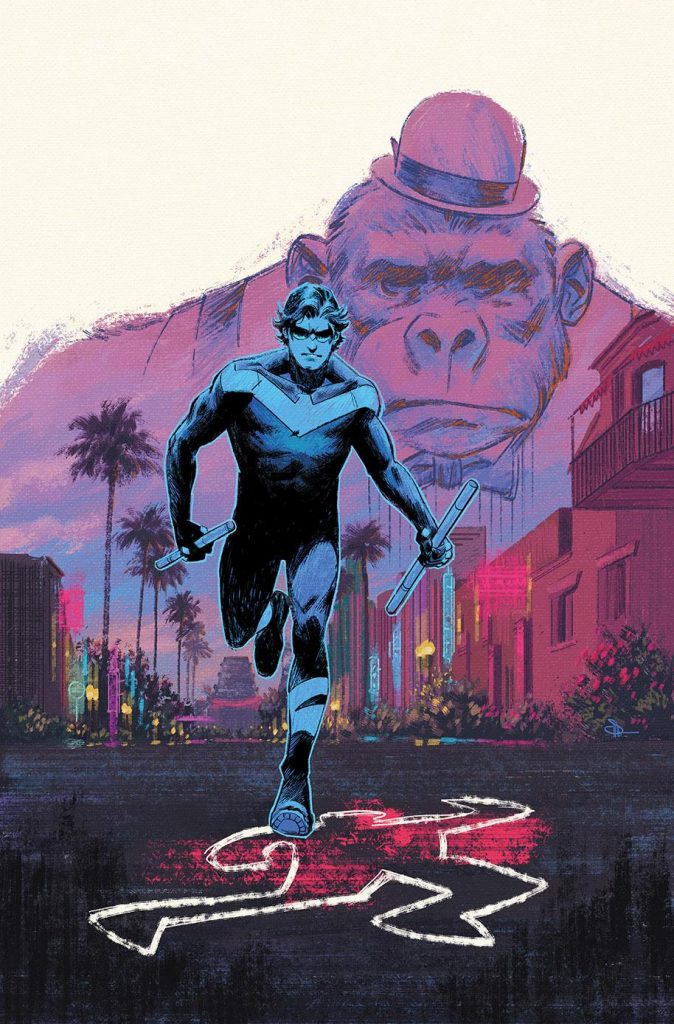 FreakSugar: How did you become involved in the Nightwing/Magilla Gorilla one-shot?

Heath Corson: That’s a really good question. Like anything in the comic book industry, it involves a lot begging. [laughs] I met my editor Jim Chadwick when I was working on the Bizarro book. He was editing Bat-Mite. I kept pushing for a Bat-Mite/Bizarro book and call it World’s Worstest. [laughs] That never happened, but Jim has been a buddy for a while, so I kept checking in with him. I actually pitched an idea that never came to fruition, but kept bugging him. He said, “Hey, I have something on Magilla Gorilla if you want to pitch on that.” I thought I would love. So I kept knocking on his door until he let me in.

FS: Was it always supposed to be a partnership between Nightwing and Magilla Gorilla in this book?

HC: My first pitch was Magilla Gorilla/Detective Chimp. But they felt like that would be too much monkeying, too much ape, too much gorilla. And I was going to be Gorilla Grodd the bad guy, but they thought that was going to be too silly. What I like about these Hanna-Barbera/DC Universe crossovers is that they really fit the DC characters into the tapestry of the DCU sort of seamlessly. So it came back that they thought that this seems a little disconnected from that concept, and that made sense to me.

The next bit was Nightwing, who I’ve never actually written in comic books before. I’ve written him in animation, but I’ve never really taken a crack at Dick Grayson and, man, he’s a fun character to write. 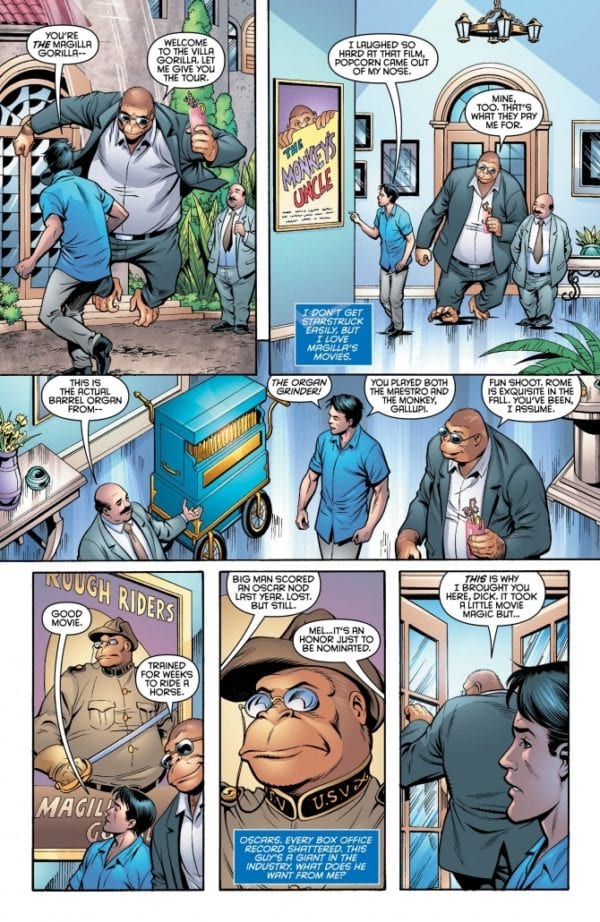 From the NIGHTWING/MAGILLA GORILLA SPECIAL #1

FS: I feel like Dick Grayson’s voice correct and did it really well. I feel like he’s a tough one to crack sometimes and you did that balance well. It’s that balance of serious and fun he has about him.

HC: Yeah, that was really important to me to get Dick’s voice right. One of the things I think helped was to make him very emotional in the story; have some emotional resonance and emotional stakes about his parents and his life before. That really helped a lot to and helped him to be thoughtful and introspective in a way I don’t remember him talking about his circus life much.

FS: You mentioned that one of the mission statements with these crossovers was to make sure the story feels grounded. Even if it wasn’t Magilla Gorilla but another primate, you can see this sort of story fitting into the world of Haley’s Circus.

HC: That’s good to hear because it’s really important to make sure these stories don’t feel jokey or added-on.

FS: Without giving too much away, what can you tell readers about the premise of the Nightwing/Magilla Gorilla one-shot?

In the middle of this, there is a horrific murder and Magilla and Nightwing have to go on a Big Lebowski, sun-drenched noir romp around Los Angeles, which takes them from one end of the city to the other. We have a couple other familiar faces from the Hanna-Barbera world as well who pop up. 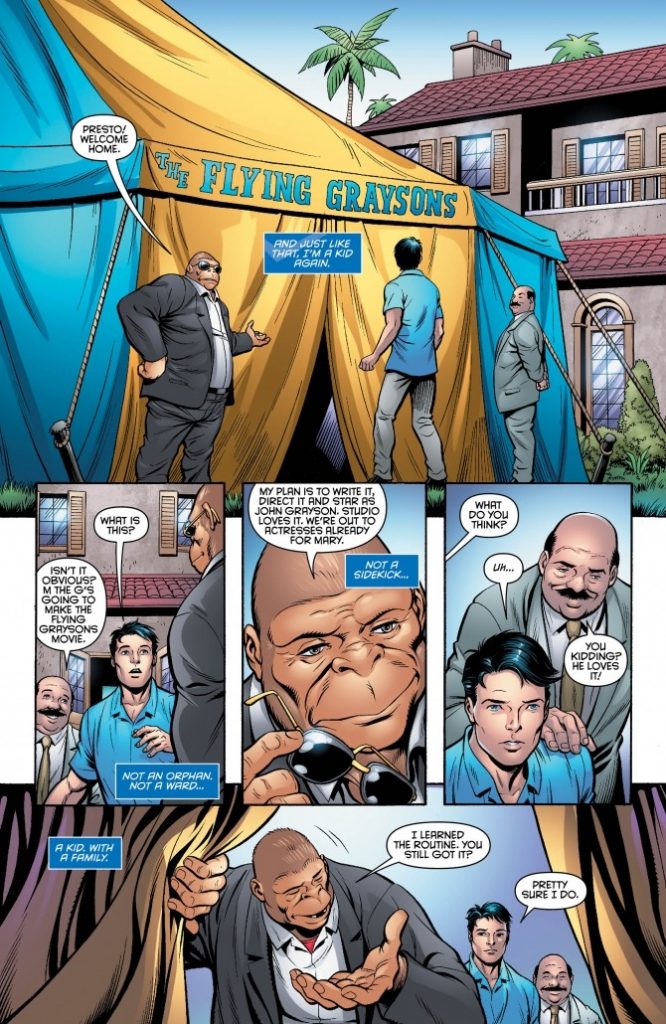 From the NIGHTWING/MAGILLA GORILLA SPECIAL #1

FS: The noir aspect works really well, with the L.A. Confidential vibe, which is appropriate since the story is set on the west coast. Why did you decide to go that way with it?

HC: I think it comes from being in Los Angeles and knowing that there is a lot to satirize. I hit upon making Magilla an actor, which I took from the constant refrain from the cartoon: “Magilla Gorilla for sale.” I was looking for my take on that.

Once I realized, “Oh, he’s an actor,” the world sort of suggested itself around that. Between that and being in Los Angeles and having a whole of things I wanted to poke fun at and show off—everything from Burbank to the Magic Castle to Malibu to Venice Beach to Hollywood—there was a lot to cover. That’s when it became this really fun L.A. Confidential/Big Lebowski sort of noir story.

The Nightwing/Magilla Gorilla Special is on sale now from DC Comics.

When a famous Hollywood talent agent is found brutally murdered, suspicion and evidence seem to point to his most famous client, Oscar winning actor Magilla Gorilla. Dick Grayson, already in Tinseltown to meet with said agent, senses something suspicious. Donning his Nightwing costume and joining forces with the simian suspect, he’s got one night to prove that this monkey doesn’t belong in a cage. Plus, part three of a Secret Squirrel backup story written by J.M. DeMatteis.