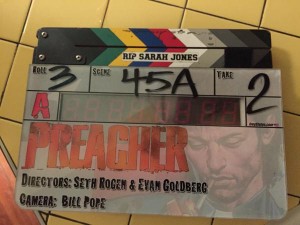 For many dedicated readers of Preacher, the thought of a television series based on the acclaimed DC Comics/Vertigo comic book title by writer Garth Ennis and artist Steve Dillon following the Reverend Jesse Custer, seemed as elusive as the God Jesse, his girlfriend Tulip, and his best friend and vampire Cassidy were chasing. However, after the AMC network greenlit a proposed pilot from Seth Rogen and Evan Goldberg and as more and more actors were cast for Preacher’s menagerie of the mundane and the macabre, fans became giddy that the show was truly coming pass.

Now we have concrete proof that the production is indeed underway, as Rogen has tweeted a pic confirming that the pilot is a go.

While we don’t have a trailer to go by yet, the description of the series teased so far gives me heart that the team behind the series will attempt to stay true to comic book, which, sadly, is more than I can say for the clip released for the comic-turned-television series Lucifer released yesterday.

Preacher follows Reverend Jesse Custer, a tough Texas preacher who has lost his faith, and has learned that God has left Heaven and abandoned his responsibilities. He finds himself the only person capable of tracking God down, demanding answers, and making him answer for his dereliction of duty. Accompanying Jesse on his journey is his former girlfriend and a friendly vampire who seems to prefer a pint in the pub to the blood of the innocent. On his tail is one of the most iconic bad guys in print – an immortal, unstoppable killing machine named the Saint of Killers —a western lone gunman archetype whose sole purpose is to hunt and kill Jesse.

Rogen has admitted that the series will take some liberties with the comic book tale in order to expand on ideas explored in the Ennis/Dillon story, so that even knowledgeable viewers of the book will be surprised what the show has in store. Still, the synopsis suggests that Rogen and Goldberg, who are huge fans of the comic, will be faithful to the overall spirit of the epic yarn.

Preacher stars Dominic Cooper (Captain America: The First Avenger) as Jesse Custer, Ruth Negga (World War Z) as Tulip, Joseph Gilgun (This Is England) as Cassidy, and Ian Colletti (The Sopranos) as Arseface is now in production. The pilot is expected to premiere sometime next year.

For more background on all things Preacher, be sure to check out more articles here at FreakSugar!