As any Zelda fan should know, when you touch the legendary Triforce you’re given a chance to wish for anything. Most of us would wish for world peace or maybe an end to cancer. PFFFFF, thank the goddesses that someone thought to wish for Hyrule Warriors instead.

The latest trailer is the best by far. Newer playable characters are revealed with rock-gobbling Goron boss, Darunia, and pisces paramour, Princess Ruto, showing off some of their evil bashing skills. We also get to see some of the baddies strut their stuff as well – though no confirmation for any of them being playable.

I can, however, confirm from first-hand experience that Hyrule Warriors is quite fun. I got a chance to play last week and generally enjoyed my time. The level design feels like Zelda, with dungeons and overworld areas that really take a few pointers from the legendary series. The mixture of Dynasty Warriors with Legend of Zelda somehow feels right. From plowing through hapless hordes of moblins to epic, introductions of massive boss enemies the fine folks at ω-Force seemingly have done the impossible. Of course, at the core, this is still a Warriors title and plays pretty much like the others in the long-toothed series. However, I really think this one’s pretty fun, looks great, and has just enough Zelda flavor to draw in some of the more skeptical fans.

Oh oh!, also I noted something cool during the trailer. Around the 3 minute mark appears to be some kind bonus challenges to test your old-school Zelda abilities. It seems to feature tile sets from the first Zelda title and looks to be a neat distraction after getting tired of battling waves of mooks. Below is screenshot of Link battling a few dodongos. 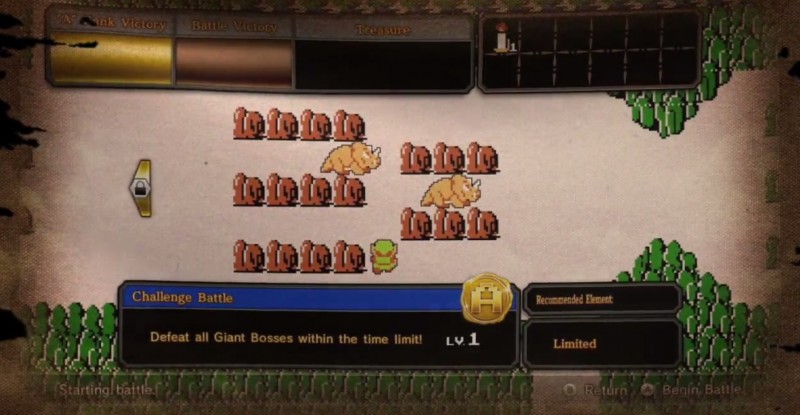 For those that are itching for a Wii U Zelda then Hyrule Warriors should provide some relief and I’m marking this high on my lust-play list of Nintendo titles. Let’s just hope it lives up to the hype when it releases in September.