Everyone needs the occasional help dispensing with supernatural irritants, and that’s where the Harrow sisters come into the picture. If you need help with shooing away the demonic that’s plaguing you, if the price is right, they can help you out of a jam. Exorsisters, the new Image Comics series from creators Ian Boothby and Gisele Lagace, brings the horror and the humor to the fore, with a few deep mysteries about the afterlife and the sisters themselves lurking in the background. If you’re a fan of The Evil Dead, Buffy the Vampire Slayer, and/or experimental comedy, Exorsisters will be up your alley!

Ms. Lagace and Mr. Boothby spoke with me recently about the idea behind Exorsisters, defining the sisters’ personalities, teasing what we’ll see of Hell and Heaven, and how humor plays a role in crafting their story. 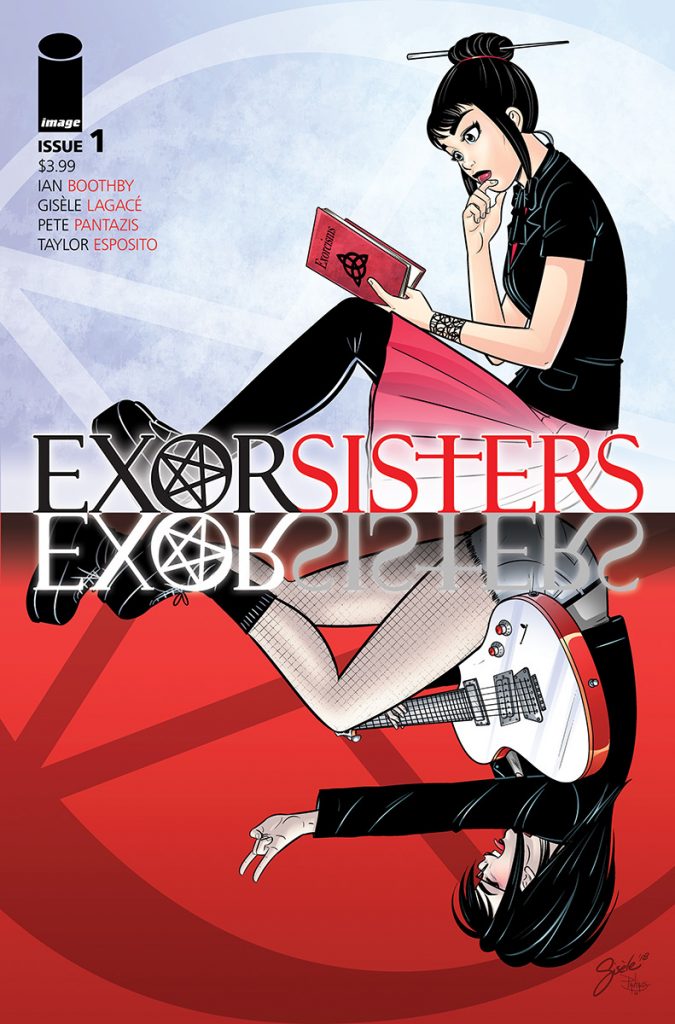 FreakSugar: For readers considering picking up the book, what is the conceit of Exorsisters?

Gisele Lagace: Our elevator pitch is basically “It’s about two sisters who will get your soul out of hell at a reasonable rate if you accidentally sold it to the devil.” Obviously, it’s more than that, but we’re trying not to spoil the first issue for new readers. The cat will soon be out of the bag though.

Ian Boothby: Yes it’s also about family and lies. So much so that there’s a lie in the title of the book.

FS: The Harrow sisters, who we meet in this first issue, have such defined personalities and designs that they pop off the page. What can you tell us about them?

GL: They look like identical twins but their tastes and personalities are quite different. Without spoiling too much, let’s just say that they weren’t always together growing up. They’ve experienced different things which shaped who they are today as young adults. In regards to designs, I went for a sophisticated gothic look for Cate, and a punk rock look for Kate.

IB: They’ve both been through a lot and have learned to deal with it in very different ways. But one thing they have in common, they do not like demons. 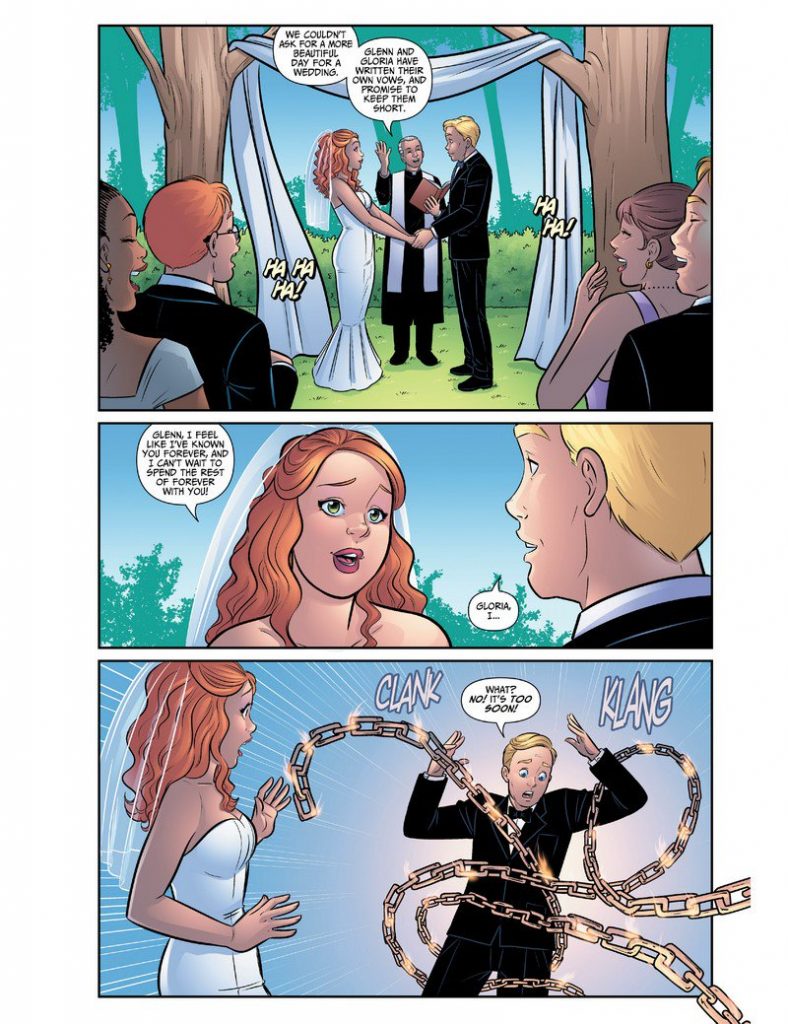 FS: How long had this idea been gestating and how did you two come to work together on the series?

GL: Ian came up with the idea originally, so I’ll let him talk about that. In regards to how we ended up working together, I was talking to my friend Nick Bradshaw about wanting to collaborate with a new writer that had a good sense of humor and he suggested Ian. I’m glad he did ‘cause it worked out!

IB: Yes, Gisele has created so many great characters for this book. From the horrific to the cartoony to the cartoonishly horrific. Very grateful to Nick for introducing us.

FS: Gisele, I’m always a fan of your work and I love your designs in this book. Did you two talk about how you want the look of the book to be?

GL: Thanks! I don’t think we did, actually. I believe I told Ian I was getting inspiration from xxxHolic by Clamp, and he just said “sure!” In the end, it ended up looking like its own thing. I’m still working on building the look of this world. 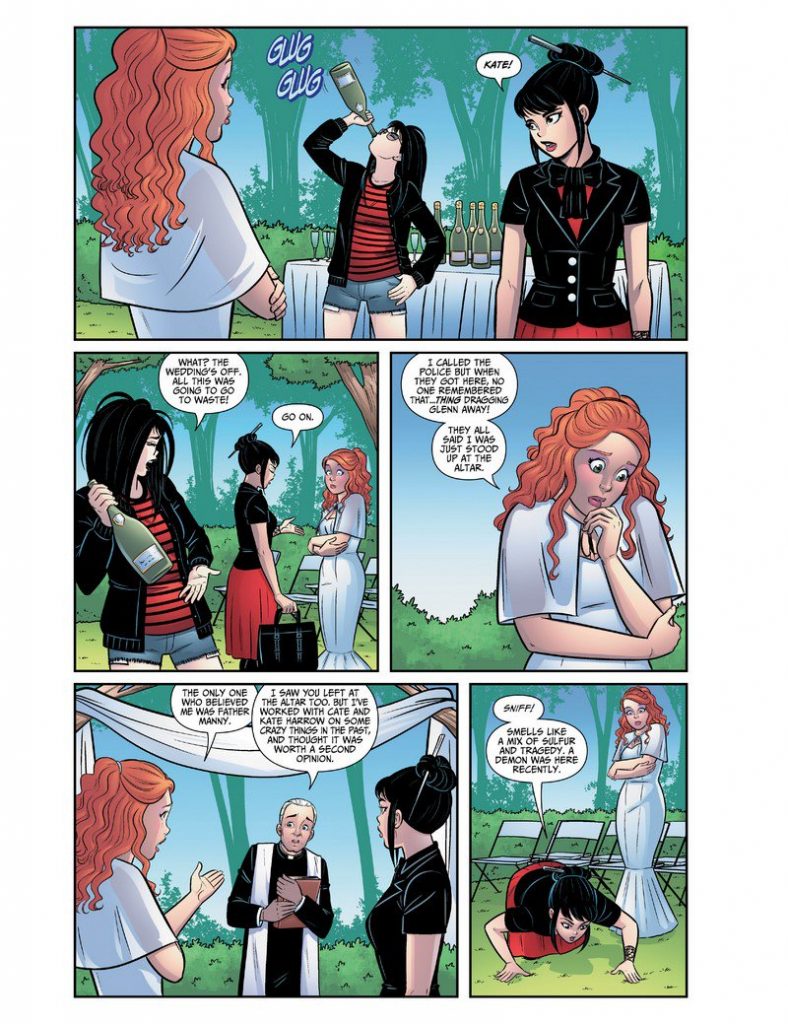 FS: Following up on that, what was the influence behind the designs of the sisters in particular, given the feel of the book and what we ultimately learn about them?

GL: I think their personalities and tastes made it fairly easy for me to decide what they would look like. I did lots of googling for clothing they could wear, and have a folder full of clothing ideas for each one.

FS:  The first issue gave us a glimpse into who the Harrow sisters are and what they do through a case they take on. However, the final page of the book suggests that there will be an overarching arc that comes into play. Will the book be a balance of vignettes of cases within a larger story?

IB: Each character has a very deep and dark story which we’ll learn about through flashbacks and appearances from characters they met along the way. 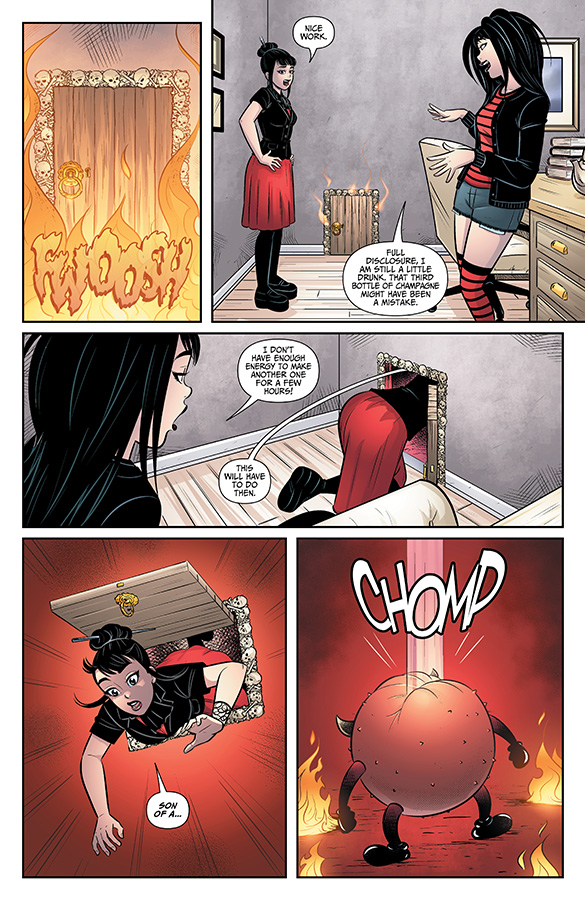 FS: One of the things that drew me to the book is the humor and back-and-forth between the sisters. Do you two have any particular influences that have impacted your work on Exorsisters, either in terms of humor or horror?

GL: Both Ian and I have a background in humor. However, we’re both fans of horror too. They actually mix quite well, just think of shows like Supernatural or Buffy. I think it’s what we’re trying to achieve here. Judging from our past work, though, we may end up being a little more absurd than those shows.

IB: A reviewer said Exorsisters was Buffy the Vampire Slayer meets The Good Place.  I don’t disagree. I like the dark humour and heart in both. 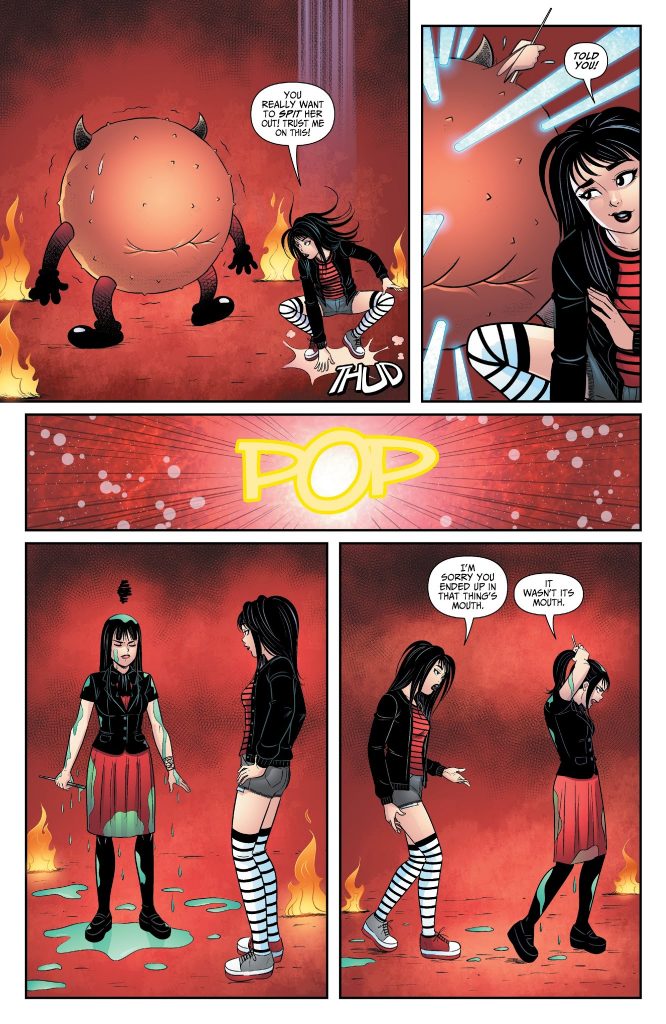 FS: It seems like you two are having a ball with the book. What would you say has been the most fun you’ve had on Exorsisters so far?

GL: Building the look of this world has been pretty fun for me. I’ve drawn monsters before but not quite like this. Ian throws nice challenges at me. I also love seeing the final pages once lettered and colored. Taylor Esposito and Pete Pantazis are doing a bang-up job.

IB: Gisele sends me the pages of art very late at night and it’s always a treat to see what she’s created out of my nonsense. I especially like the design for Cate’s late ex-boyfriend Buzz. It wasn’t what I expected and now he’s one of my favourite characters. 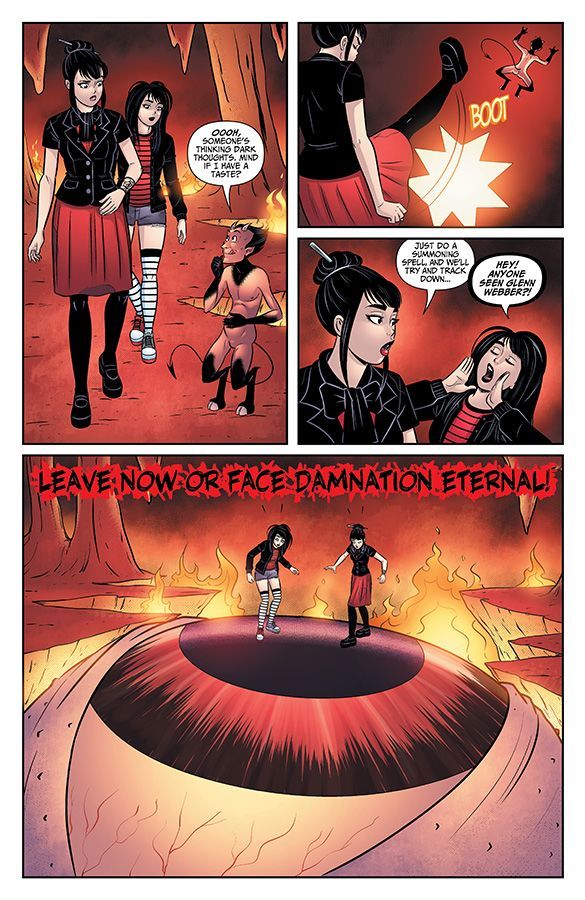 FS:  Is there anything that you can tease about what we can expect to see in the book going forward?

GL: More world building, not only in Hell but in Heaven too. 🙂

IB: Yes, they’re going to learn there are worse places to be sent to than Hell.

Exorsisters #2 is on sale now from Image Comics.

After a demonic domestic dispute, Cate and Kate Harrow are visited by their estranged mother, leading to revelations about how the sisters got dragged into the dark world of deals and devils.