DC Comics’ Young Animal imprint from curator Gerard Way is back with a new wave of comic books ripe with tight storytelling, esoteric plots, and mind-bending art to press and prod the minds of readers. One of the miniseries leading the charge is the recently-launched Collapser, written by Mikey Way (who, of course, along with Gerard, is formerly of My Chemical Romance) and Shaun Simon (of DC’s Art Ops, among many other books), with art by Ilias Kyriazis (Dirk Gently), colors by Cris Peter, and letters by Simon Bowland.

Collapser follows Liam James, a nurse who has his sights set on a career as a DJ, if he can manage and cope with his anxiety. After the passing of his mother—who has been absent most of his life—Liam receives a package in the mail containing a black hole, which imbues him with powers beyond his wildest imagination. However, while many of us would jump at the prospect of having superpowers, this might not be the best thing to happen to Liam, as his life is precarious enough as it is.

Collapser has all the hallmarks of not just a great Young Animal story, but a solid comic, period, with a tale that not only entertains and engages readers, but prompts them to connect with the tale and the characters and question the nature of reality itself. A good part of the credit, of course, goes to Kyriazis, who mixes realism and the psychedelic beautifully with every line stroke.

Mr. Kyriazis spoke with me recently about the conceit of Collapser, his collaboration with Mikey Way and Shaun Simon, what brings him joy working on the book, and breaking the laws of physics in a distinctly comic book way. 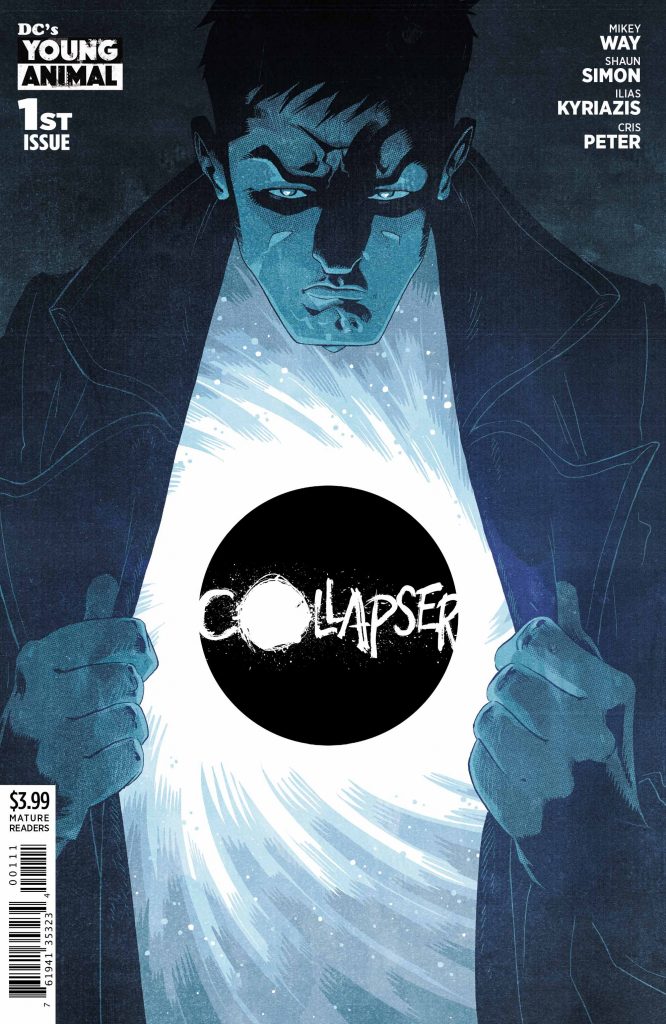 FreakSugar: For folks reading this, what can you tell us about the idea behind Collapser?

Ilias Kyriazis: Liam James is a DJ/nurse, struggling with anxiety, who’s life gets turned upside down when he receives a black hole in the mail. He has cosmic powers now, but it remains to be seen if this is the best thing that ever happened to him or the worst.

FS: How did you become involved with the book?

IK: As I was wrapping up my stint on G.I Joe, I emailed DC to see if they might have something for me and heard back from Jamie Rich, who was editing Collapser. Turns out he, Mikey Way, and Shaun Simon were familiar with my Dirk Gently work and thought I’d be a good match for the book. It was a rare case of really great timing. 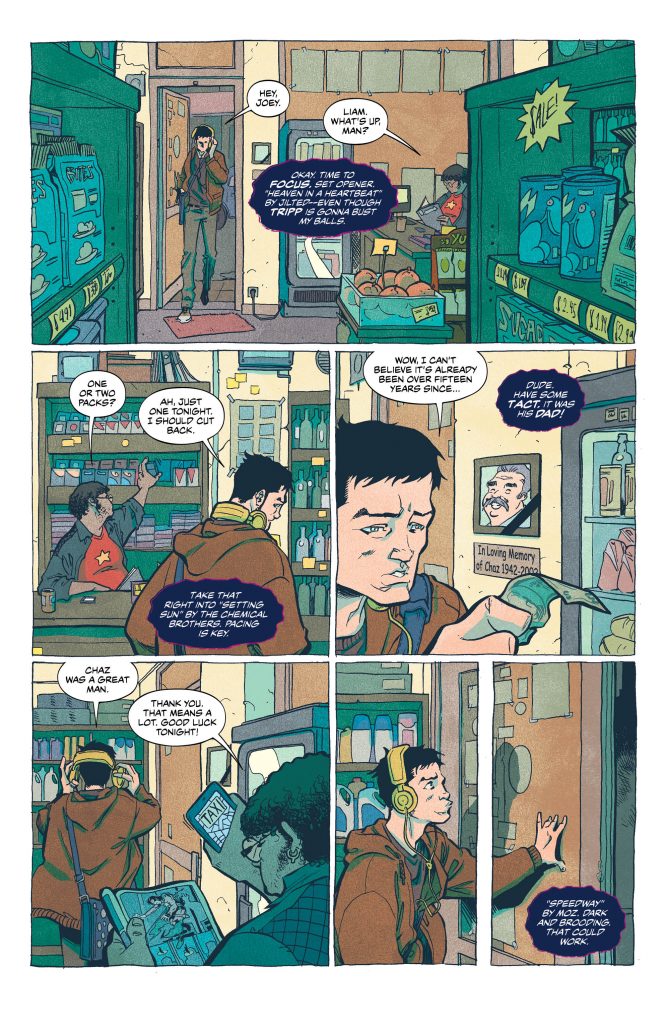 FS: The art in the book is gorgeous, a mix of realism and sci-fi with some fantasy sprinkled in. How did you decide what the look of the series should be?

IK: Thank you! Well, we did want the look to look like no other. A bit of punk rock grittiness to reflect Liam’s character, a grounded sense of reality to offset the otherworldly weirdness and a shot of humor to liven up the mix. I’m very happy with this effect we created with Cris Peter, the colorist: since the black hole is so important NOTHING else in the book is as dark. The line art is colored dark blue and when we introduce actual black color into the story it really pops!

FS: Following up on that, what’s the collaboration process like with you and Mikey and Shaun?

IK: Thankfully, they show a lot of trust in me. We’ve had some initial conversations about the feel of the book and the look of the main characters and we were all on the same page 100%. So now the script arrives for each issue, they get me all excited and they let me run with it. An artist’s dream when it comes to a collaboration! 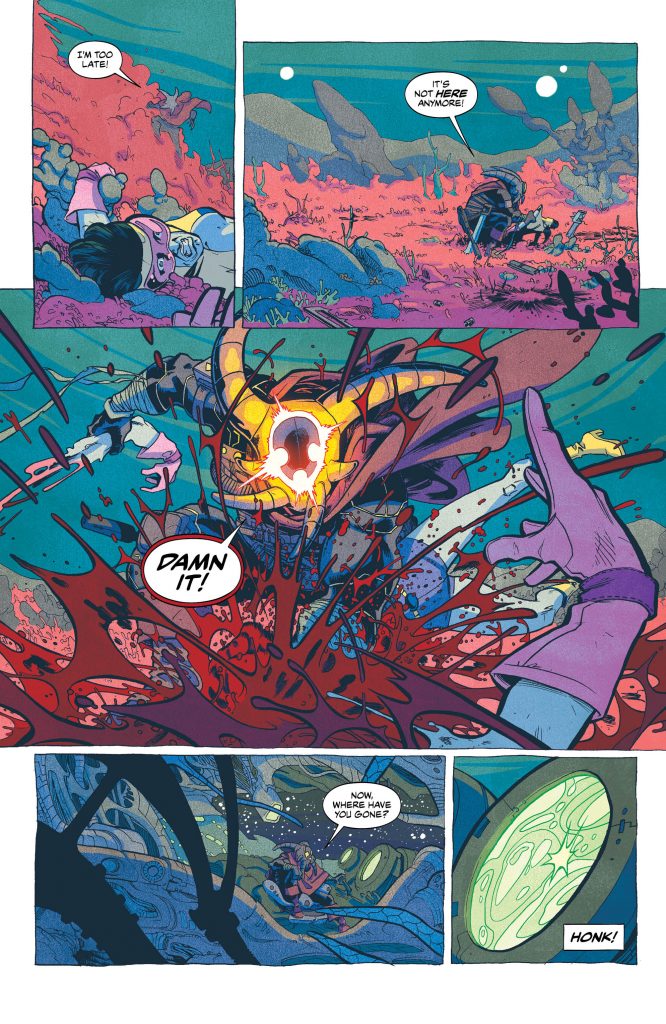 FS: Is there a particular headspace you like to be in when tackling a book like this? If so, how do you get in that space?

IK: The comic deals with some heavy issues, but it never forgets to be fun. I was working on it during a very difficult time in my life, while dealing with personal loss, and it proved to be the right project at the right time. Its darkness expressed how I was feeling and its quirky sense of fun gave me hope.

FS: Do you have any influences that have impacted how you approach Collapser?

IK: I’m very bad at pinpointing my artistic influences, but I can tell you deciding to base Liam’s neighborhood in the Exarchia area of Athens, Greece (where I live) is what made the book really click for me. It’s an old but vibrant neighborhood: beautiful but rundown houses, ugly apartment buildings, narrow streets and tons of graffiti. Being able to see where Liam lived (even if in the comic we’re calling it NYC) made him feel more real to me. And because it was a unique environment it informed all my artistic decisions for the book. 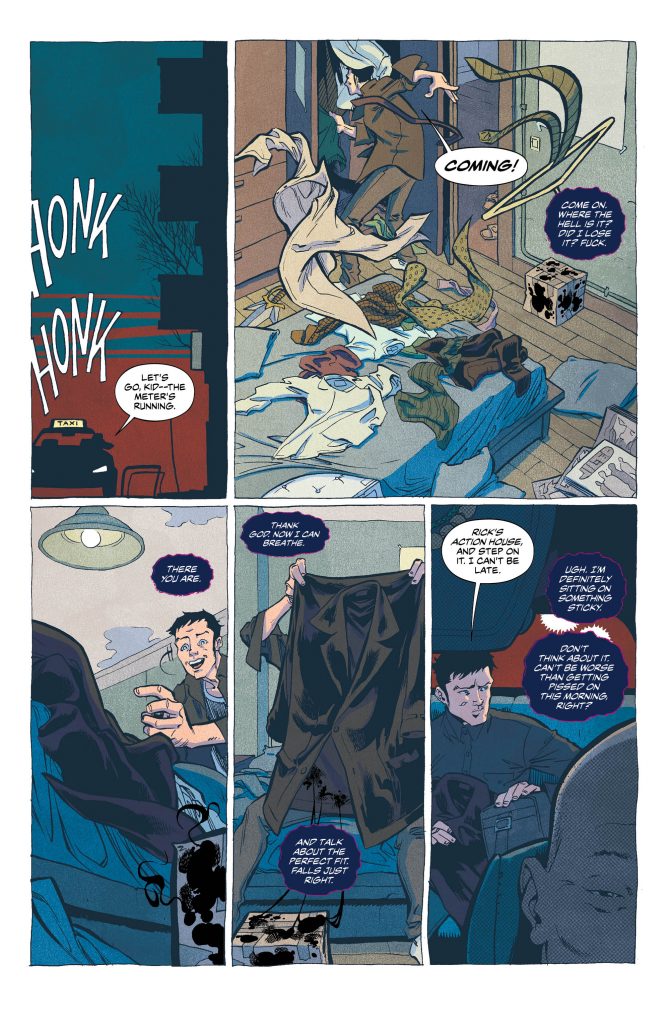 FS: What has been your favorite part working on the series? What kind of creative muscles does it let you flex that other projects have not?

IK: Have we mentioned that the comic features tons of weird aliens and otherworldly creatures? And big crowd scenes with tons of people? And environments where everything is broken and dirty and old? These are some of my favorite things to draw, but the really special aspect of the book is Liam and how he uses his powers. The black hole in the comic breaks all laws of physics and we wanted to show that. My approach to everything else is realistic, but when it comes Liam’s power I discard all I know about perspective and such and it’s so interesting.

FS: Is there anything you can tease about what we can expect in the first arc?

There’s a voice in the head of Liam James questioning everything he does—from his job at the nursing home to keeping his relationship with his girlfriend afloat. Liam suffers from anxiety, and the only thing that quiets it is music, which makes a weekly DJ gig his one saving grace. But Liam’s life changes forever when he receives a black hole in the mail (yes, you read that right), one that takes up residence in his chest, grants him insane superpowers, turns him into a celebrity and draws him into a cosmic conflict beyond his wildest imagination. Where did this black hole come from? Why Liam? Is power the cure? Or will superstardom turn Liam into a black hole himself? Find out in COLLAPSER, a superhero story that could only come from DC’s Young Animal!

Following the occupation of his chest by a sentient black hole, Liam James&#8217; anxiety disorder is further exacerbated when he accidentally destroys Stonehenge, among other irreplaceable wonders of the world.