While the title of Sebastian Girner, Jody LeHeup, and Nil Vendrell’s upcoming Image series Shirtless Bear-Fighter suggests that the book will have a certain amount of nudity, the creators have confirmed that Shirtless (the protagonist’s first name, f’realz) will be sans clothing of any kind for at least part of the tale. With that in mind, a variant cover for SBF with Shirtless completely in the buff seems like a no-brainer. Check out the rough-houser of all things ursine that Image just dropped. And yes, that does seem like a lot of pixels surrounding his twig and giggleberries. 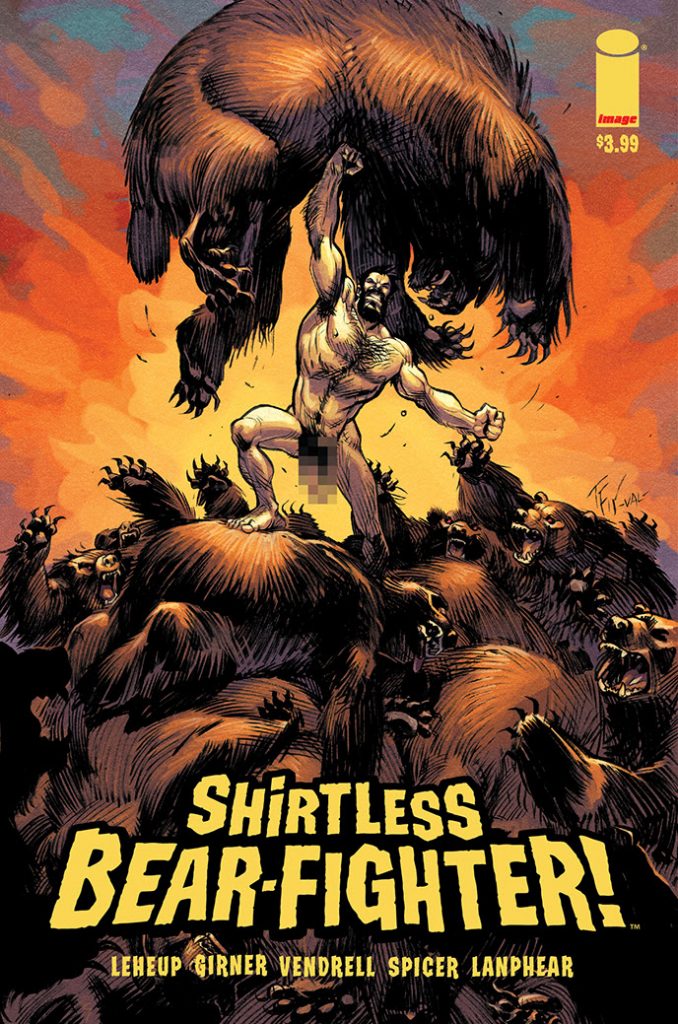 Shirtless Bear-Fighter #1 of 5, written by Sebastian Girner and Jody LeHeup, with art by Nil Vendrell and Mike Spicer on art and lettered by Dave Lanphear, is on sale June 21st from Image Comics. (Also, be sure to check out our interview with Misters Girner and LeHeup about SBF!)

After being betrayed by the bears that raised him, the legendary Shirtless Bear-Fighter wanders the forest he’s sworn to protect, fistfighting bears, eating flapjacks, and being the angriest man the world has ever known! When wild-eyed, super-strong bears attack the citizens of Major City, Shirtless ventures into the human world to do what he does best…PUNCH THOSE BEARS IN THE FACE! But all is not as it seems. Someone is manipulating Shirtless…and only by confronting the demons of his past can Shirtless hope to save his future! A heart-filled, hilarious, tall tale for the ages… you don’t want to miss SHIRTLESS BEAR-FIGHTER!