The upcoming Avengers: Infinity War has nods a’plenty to the Infinity Gauntlet source material, as both feature the Mad Titan Thanos using the infinity stones (called gems in the original miniseries) to play god and “balance the universe.” There’s one hidden maybe-wink to fans of the original story in the newly-released trailer for the film that made me smile–you know, in addition to all of the other things in the trailer that had me giddy. In a blink-and-you-miss-it moment, we see Mark Ruffalo’s Bruce Banner (non-Hulked-out) lying on the floor of Doctor Strange’s Sanctum Sanctorum, apparently having crashed through the building’s ornate window.

While we don’t know why Bruce is here, it’s possible it’s tied to the mid-credits scene of Thor: Ragnarok, which featured Thanos’ ship Sanctuary II appearing before the vessel on which Thor, Loki, Bruce, and the Asgardian refugees were traveling. Did Bruce escape to let the heroes of Earth know of Thanos’ threat? We won’t know until next May. However, the scene did remind me of a moment from the Infinity Gauntlet comic: 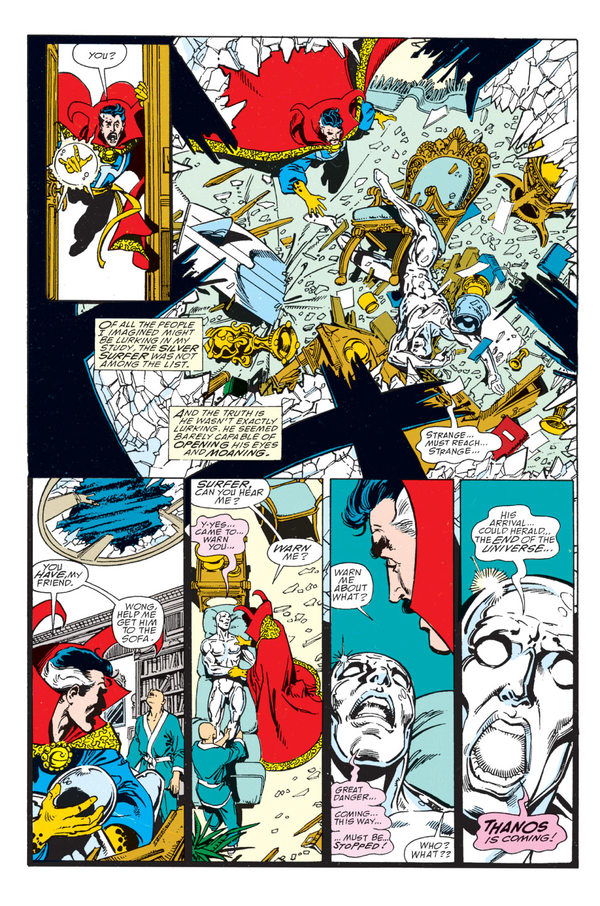 The Silver Surfer has escaped Thanos after learning of his plan to gather the infinity gems/stones and just barely makes it to Doctor Strange’s home to warn him. While we know that the Silver Surfer won’t be popping up in Infinity War–Fox owns the movie rights to the character–the scene is very reminiscent of what we saw in the trailer today.

Was it intentional? Who knows, but this kind of ruminating is fun and will keep us sane as we wait on pins and needles for Avengers: Infinity War to hit on May 4th, 2018.