Doctor Strange, Marvel Studios’ latest blockbuster hit, has been in theaters a few weeks now, but its message lingers with me all this time later. Perhaps it’s been the weight of the United States presidential campaign and its culmination last week. Maybe it’s due to the vitriolic anger that has drenched social media since the election of Donald Trump to the office of the presidency. Or maybe it’s because I’m looking for a spark of hope, wishing to grow it into a fire whenever, wherever, and however I can.

For those unfamiliar with the story or haven’t yet seen the movie, Doctor Strange tells the tale of Stephen Strange (Benedict Cumberbatch), a brilliant surgeon and a man of means who, through his own arrogance and hubris, inadvertently destroys the very hands that brought him acclaim, confidence, and wealth. However, the accident that robbed Strange of his skills was merely the culmination of a long line of choices that focused on the doctor’s ego and, consciously or not, a desire to fill a void gaping in his spirit.

Following his accident, Strange seeks all manner of western surgeries to repair the damage to his mangled hands, a quest that ultimately proves unfruitful. While speaking with a man who was seemingly healed in ways beyond what the empirical world can explain, Strange learns of a place called Kamar-Taj, home to the Ancient One (Tilda Swinton), a person who can supposedly return to Strange what he has lost. 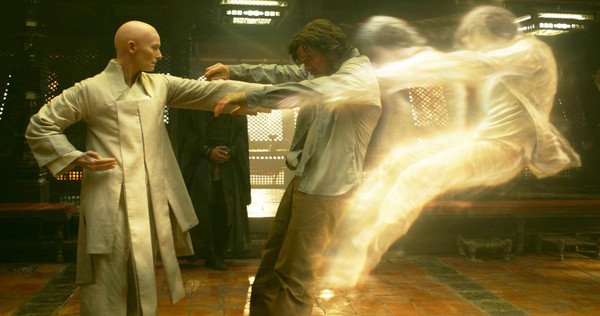 However, rather than offer to repair Strange’s hands, the Ancient One instead proposes to heal the doctor’s spirit, teaching him ways in the mystic arts and magic that his scientifically-trained mind has trouble wrapping its head around. While Strange is eventually a quick study, excelling in his use of spells and sorcery that even astonishes the Ancient One, greatness eludes Stephen because of stumbling blocks he still can’t avoid.

During a conversation about the nature of life and death, Strange ruminates about what he considers the reasons he became a great surgeon. The Ancient One, however, is not having his justifications:

Arrogance and fear still keep you from learning the simplest and most significant lesson of all: It’s not about you.

It could be effectively argued that one of the biggest takeaways from most superhero romps is that humanity works best when it works together, choosing to stop focusing inward so much, but rather project our efforts outward. In selflessly striving to make the world better than how you found it, not only do you repair the psychic damage that is inflicted on humanity on a daily basis, but you can also heal yourself in the process. Kindness is a reciprocal process of healing others and oneself. Stephen Strange never repaired his damaged hands, but he was able to repair the crack deep in his spirit and, in turn, was able to learn how to help his fellow women and men in a way he never had before. The use of Doctor in Doctor Strange isn’t just an allusion to his medical prowess or how he fixes the broken mystical barriers that separate our world from others, but also a nod to how we are all capable of healing the deep, existential wounds of others and ourselves.

Which leads me back to this past week. Whatever your party affiliation, however you voted, it’s clear that many people of the United States are hurting. Angry. Afraid. Legitimately scared for their very existence and right to live. We call out into the darkness, asking what we can do to cut the obsidian night with a sliver of light.

But there aren’t any easy, satisfying answers. One of the reasons I keep reading comic books and watch movies based on them is because of the glimmer of hope they give me in an uncertain world. The answers they offer are not always the most nuanced; in fact, they’re often simplistic. We can’t change the world in the same ways that happens in a handful of comic book pages or two hours’ worth of screen footage. Stephen Strange, with his enlightenment and mastery of magic, isn’t going to wipe away the scorches of hate that have marred our very spirits. But if a film like Doctor Strange reminds us of anything, it’s that the best way to begin to make our world more palatable, more just, and safer is to comfort the hurting. Lift the wounded. Offer kindness to a friend. In working to repair a broken world, we can make strides to repair ourselves.

Doctor Strange is now in theaters.