Every single one of us contains multitudes: our experiences, our preferences, our likes and dislikes. These multitudes make up the big, complex, messy thing that we call our personality, and that personality is not created in a vacuum. Somewhere along the way, however, many children are told that they are only allowed to participate this activity or like that kind of book or show or type of playing. These binaries are driven by social norms that can have a real, restrictive, and adverse impact on the development and happiness of a child as they grow into adulthood and try to suss out who exactly they are.

Daniel Kibblesmith and Ashley Quach seem to recognize that danger, which is why their children’s book Princess Dinosaur from Little, Brown Books for Young Readers is such a gift. In Princess Dinosaur, the eponymous toddler acts like most toddlers do, going from thing to thing, state of play and wonder to state of play and wonder, immersing herself into every moment. She is fully herself without restrictions, being a lover of tea parties and fairies as much as she is of rough-and-tumble fun.

Daniel Kibblesmith and Ashley Quach were kind enough to speak with me recently about the idea behind Princess Dinosaur, the collaboration between the two, how the idea of childhood play factors into the construction of the tale, and the lessons readers can take away from the book. Princess Dinosaur is a wonderful book for children to reinforce that it’s okay to have “big” feelings and it’s okay to be who you are. It’s a lesson that some adults need to hear on occasion as well. 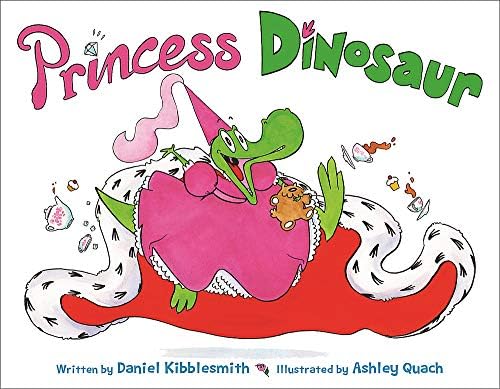 FreakSugar: This book is just all-around wonderful. What was the genesis behind Princess Dinosaur?

Daniel Kibblesmith: For me it started in a movie theater. My wife and I were trying to imagine what our then-totally-hypothetical future child might be like, and based on our respective demeanors and our own multi-faceted personalities (as everyone has) we settled on a princess AND a dinosaur. Then I had to remember that idea for the entire duration of the movie, white knuckling the arm rests until I could RUN home and call Ashley on the phone to scream the title “PRINCESS DINOSAUR!” — a moment she memorialized extremely accurately in a promotional comic she drew for our announcement. I’m happy to announce that in the intervening time, we did have said baby, and she is every bit the Princess Dinosaur we imagined, up to and including biting me a lot.

Ashley Quach: The book really did come in one fell swoop, like it just fell into Daniel‘s head fully formed. The sketching took a bit longer. My original version of Princess Dinosaur had a much bigger head… more rectangular, a little more realistic. Daniel and I went back and forth until we got to our current version, which is a jellybean shaped head (or a puffy Cheeto, depending on your imagination) on the body of a rotisserie chicken.

FreakSugar: How would you describe the eponymous Princess Dinosaur? What do you like about her?

Daniel Kibblesmith: Princess Dinosaur is the quintessential toddler. She’s impulsive, and she’s a different thing from moment to moment, but within those moments she is totally committed. She’s kind and sweet and caring, but not yet suppressing any of her big feelings (what grown-ups refer to as “controlling” your feelings) so when the elegant tea party is over and it’s time to strip nude and attack a block-city like Godzilla, both of those actions are equally logical and equally “her.”

Ashley Quach: When we first talked about her with our editor, we hit on the idea of Constructive Destruction. That’s essentially what childhood play is. I tried to pack a lot of clues in the illustrations, visual traces of Princess Dinosaur’s creative play. My favorite thing is when she draws, I had a lot of fun drawing her murals. The end pages are my favorite: I did two different spreads as if Princess Dinosaur had illustrated them and I tried to pack them with fairy tale references… though by the end of the second spread I ran out of fairy tales and started improvising. I’ve heard from a number of readers with younger kids (2-3 years old) that their kids enjoy “reading” the endpapers. 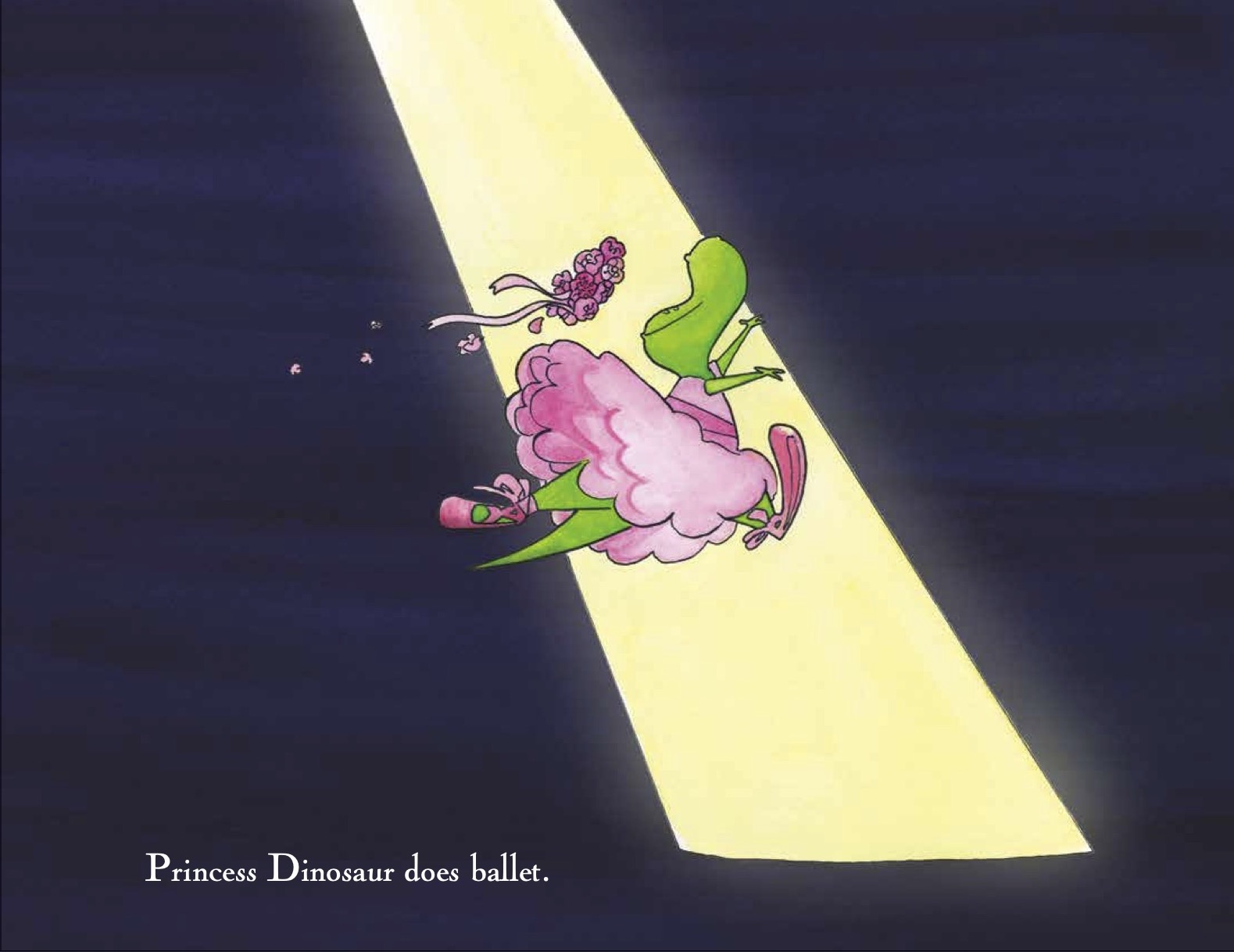 FreakSugar: You’ve worked together before on the excellent Santa’s Husband? What was the collaboration process like on this book?

Daniel Kibblesmith: This book, for me at least, was really defined by how fully-formed it arrived. Once we had the premise and title, I would say the first manuscript was written in the span of an evening, and from there, the edits to the text were relatively minor. Ashley worked much more diligently on iterations of the look of Princess Dinosaur, and I always have notes where I’m overthinking details, but when I look back at the process, it felt defined by the fact that we knew who the character was and everything flowed naturally from her. The only place we had a lot of back and forth was the cover — how do you best capture in one image someone defined by being more than one thing? I think Ashley nailed it.

Ashley Quach: Oh man, the cover. So much goes into cover design and I think I redrew this cover about a dozen times. I really like the design we came out with. The simplicity of the background makes the action really pop.

FreakSugar: Santa’s Husband was very much an all-ages book. Would you describe Princess Dinosaur the same?

Daniel Kibblesmith: “All-ages” in the sense that children of any age can read and follow it, but I would say Santa’s Husband has been more popular among adults and couples, whereas Princess Dinosaur is definitely a traditional children’s book, for and starring a little kid.

FreakSugar: Following up on that, the book is very clearly wanting to encourage readers that they are not limited in what they want to do, be it getting dirty or having tea parties. I think we could all use that lesson to apply to our own lives. What motivated you to create the story?

Daniel Kibblesmith: One big inspiration was the time I spent working in bookstores and libraries and saw many well-meaning parents trying to steer their toddlers out of a princess phase — or fairy phase, or unicorn phase — toward gender neutral or traditionally “masculine” subjects like construction vehicles or, of course, dinosaurs. My reasoning was, if a kid is passionate about something, why not let them explore it alongside other passions, and synthesize it into one big, complicated personality? Adults don’t confine themselves to a pop culture binary, you can watch Downtown Abbey and the NFL, so why not Jurassic Park and Cinderella?

Ashley Quach: I loved princess-y things as a kid, but we didn’t really have Princess Dress-up Box income in our family. Books and Disney movies were the extent to which I got to indulge in bejeweled fantasies. I think most kids go through a phase where the idea of “treasure” is exciting. It was fun to draw the jewels for this book. 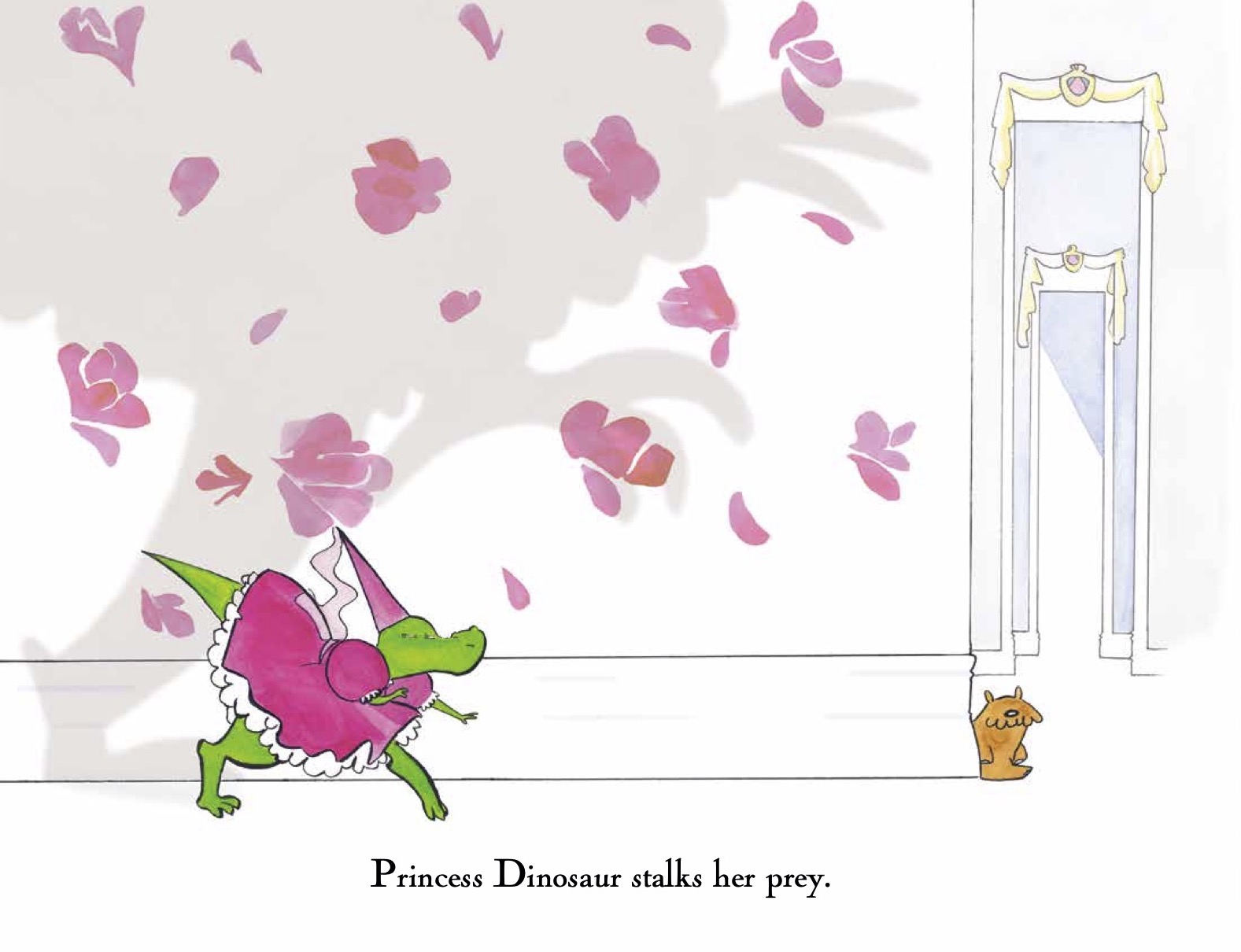 FreakSugar: Do either of you have any other projects you’d like to promote?

Daniel Kibblesmith: Right now I’m a writer for the animated Netflix show Inside Job. Unlike Princess Dinosaur, is not for children. You can buy anything I’ve written from your preferred local bookstore or internet retailer, including many comics for Marvel and D.C., like Loki and Harley Quinn.

Ashley Quach: I’m deep in post on a podcast right now that won’t be out until 2023, but it’s called Murder by Grace, it’ll be coming out from Realm. (Not for kids, in case the word “murder” didn’t tip you off!) You can also listen to my first podcast, the holiday romcom Deck the Halls (with Matrimony!) free on your favorite podcast app.

FreakSugar: If you had a final pitch for potential readers, what would it be?

Daniel Kibblesmith: Make this your go-to baby shower gift indefinitely! Buy five copies and have one on hand for visiting nieces and nephews. It’s charming, timeless, perfect for boys and girls and anyone whose personality is too big to be defined by one thing — which is everyone.

Ashley Quach: If your kids are getting into dinosaurs OR princesses, make this part of their bedtime rotation.

Princess Dinosaur is on sale now from Little, Brown Books for Young Readers.

Princess Dinosaur loves wearing pink dresses and hosting fancy tea parties. But she also loves roaring and making messes. Embodying both parts of her personality to the fullest, Princess Dinosaur isn’t just one thing, she’s a princess and a dinosaur (and some other things, too)!