A graphic novel with nods to Max Fleischer cartoons of yesteryear paired with undertones of the current refugee crisis across the globe may not, on the surface, sound like a typical all-ages comic book story. However, creators Roger Langridge and Ryan Ferrier have shot for the moon—in more ways than one—and landed with amazing grace in their new Dark Horse Comics graphic novel Criminy, on sale now. In Criminy, Langridge and Ferrier tell the tale of the Criminy family, who are forced to leave their home and everything they knew, an adventure that leads them to new lands, encounters with interesting folks, and life lessons along the way.

We spoke with Mr. Langridge and Mr. Ferrier recently about the conceit of Criminy, the influences that helped shape the world of Criminy, how Twitter connected the two for this project, and how both older Max Fleischer cartoons and the Syrian refugee crisis informed their story. 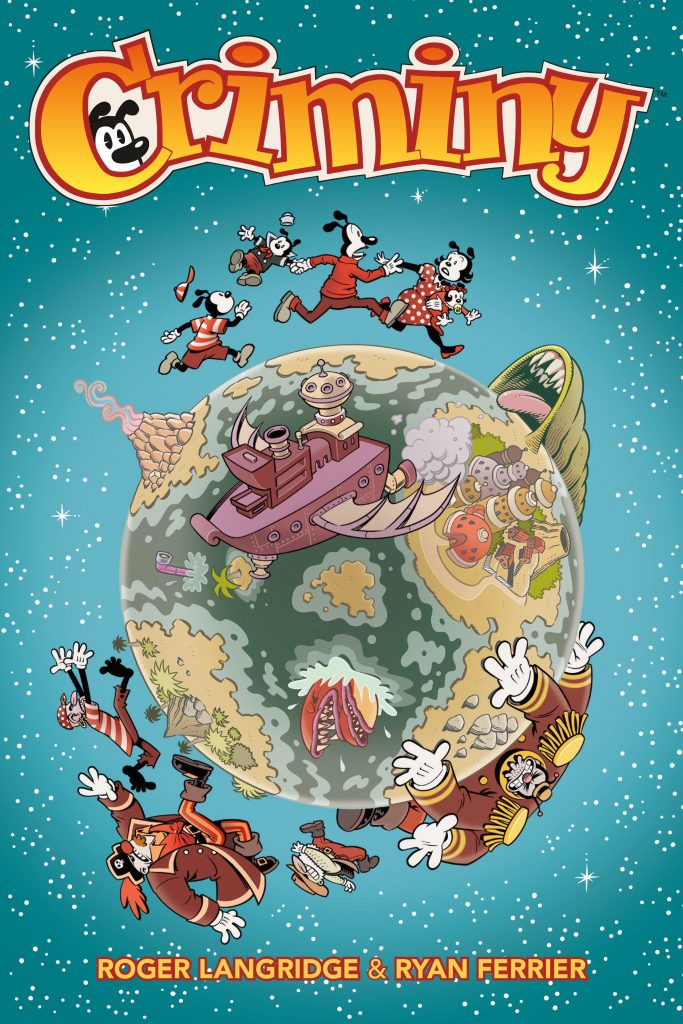 FreakSugar: For folks considering picking up the book, what can you tell us about Criminy?

Roger Langridge: It’s an adventure story about a family who are forced to flee their homeland and look for somewhere else to belong, going to lots of weird and wonderful places and meeting lots of strange and interesting (and occasionally terrifying!) people, creatures and things along the way. The tone and style of the book hearkens back to the animated cartoons of the 1930s, specifically those of the Fleischer studios.

Ryan Ferrier: At its core, Criminy is a fantasy comic about a loving refugee family searching for the seemingly impossible in a world where anything is possible. It’s a true all-ages-appropriate graphic novel that celebrates its influences from the past while embracing the kind of hope that’s held for the future. Criminy is equal parts cautionary tale and one of peril and thrills, and one of heart, fun, and laughter. It’s precisely the kind of comic book I would want to read for escapism and honesty at age ten and one hundred. 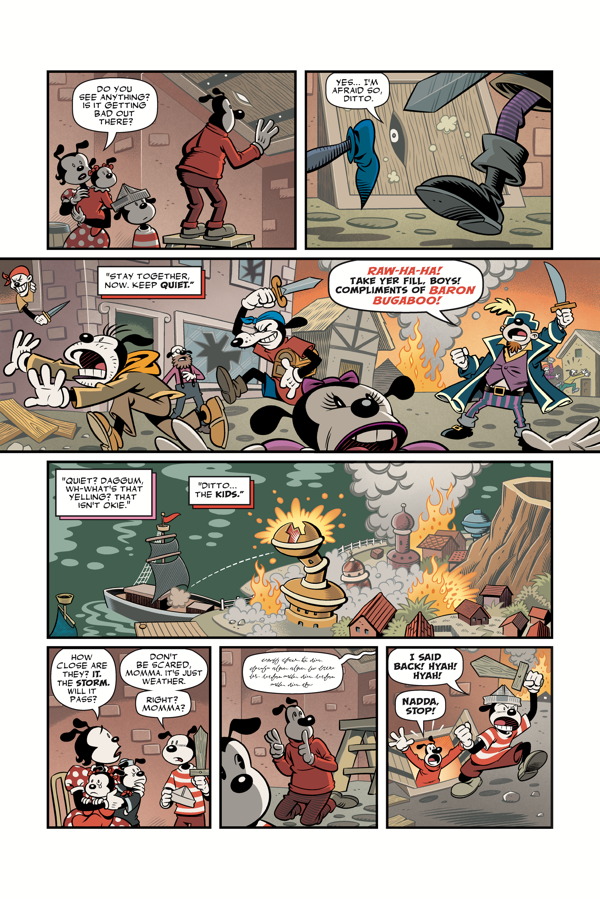 FS: The book is incredibly detailed and fully formed. What was the genesis behind Criminy?

RL: Ryan happened to mention on Twitter that he had an idea for a story set in a Max Fleischer-inspired world. I saw this and thought I might be a good fit for it, having worked on both Popeye and Betty Boop in the past, so I sent him a message; Ryan seemed up for a collaboration, so we took it from there. We decided early on that the central characters should be as normal and relatable as possible, but that everything else was up for grabs and could be as bizarre as we liked by contrast. So we exchanged ideas and sketches, and slowly the world started to take shape.

RF: Like Roger said, it was one of those serendipitous things that started with a tweet. I had been wanting to do a Fleischer inspired comic book, having studied animation for some time before my comics career. In all honesty, I was already a massive fan of Roger’s work, and when he messaged me, curious about that tweet, I nearly fell off my chair. To me, Roger was a pipe dream collaborator; not in that he was inaccessible at all, but in that he was/is an art hero of mine. Once I got over the initial shell shock, we talked some more and the concept of this refugee family on the search of a new home in this absurd world took shape. 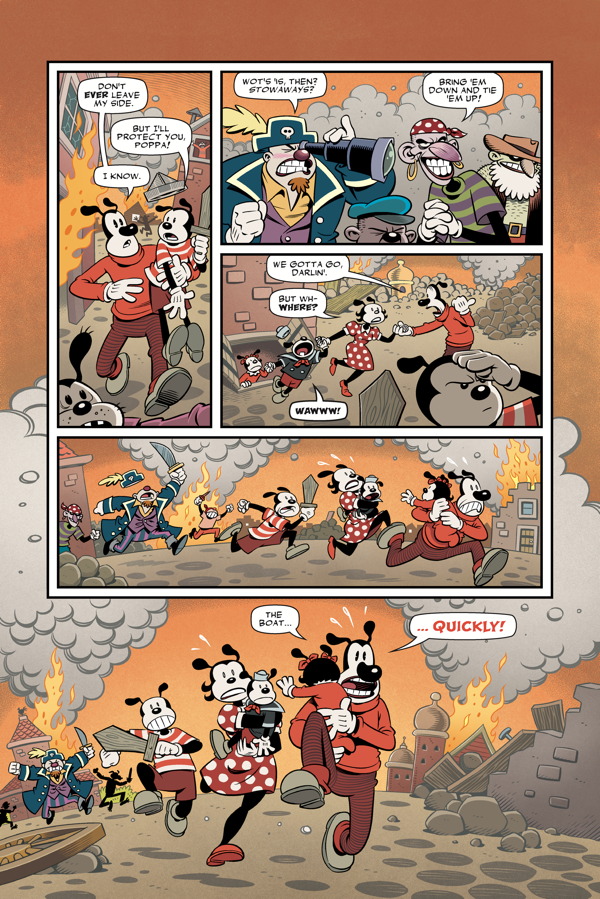 FS: How would you describe the Criminys and the world(s) they inhabit?

RL: The Criminys are everyfolk, they’re you and me – or perhaps an ideal version of you and me. They don’t let each other down, they don’t give up. Their world, after being displaced from their idyllic home, is strange and often hostile, sometimes following cruel and seemingly arbitrary rules – and all infused with that 1930s animation aesthetic.

RF: There’s so much going on in this world, and so many different styles and tones, that the Criminys are quite stand-out in how almost grounded they are; they’re in a way the nuclear family in a universe without any set standards. The world of Criminy, as you’ll see, touches on various aesthetics and themes, from old sailor-style seascapes to skeleton theme parks. Despite this world being so wildly different from person to person and locale to locale, Roger has done an indelible, remarkable job of making all of these many parts still fit together in a cohesive, believable way. His command of the craft of storytelling makes it work so seamlessly. I’m so proud to be part of a project that touches on so many different parts. 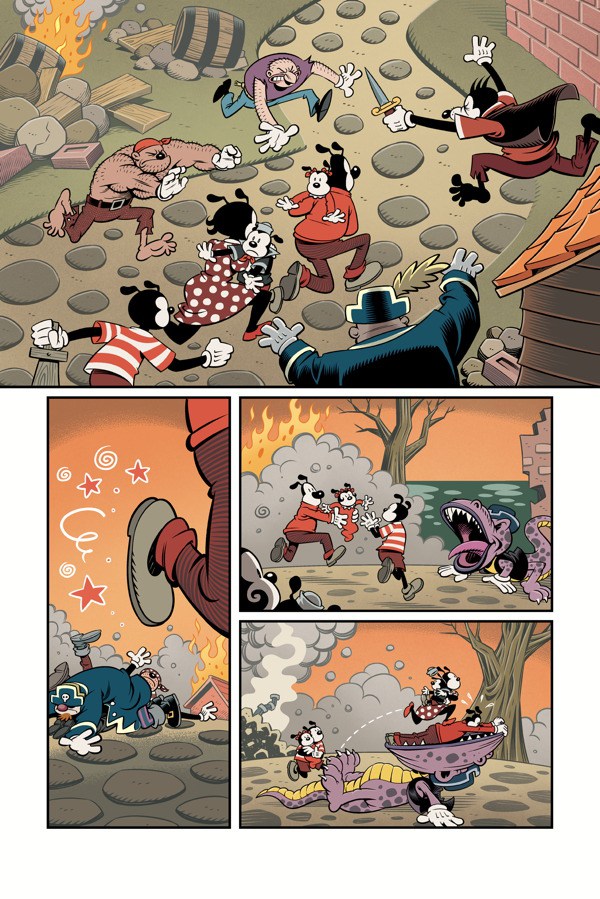 FS: This is book I’m thankful exists because I can share it with my nieces, which I can’t always do with some comics. Did you always envision this story as one geared toward younger readers?

RL: In part, certainly. Although I always want the work I do for younger readers to reward future re-readings, and not to bore their parents either! So hopefully there are a few layers to it that will reveal themselves to those young readers as they grow older.

RF: I think inherently this story—script and art—speaks to a younger audience, in the same way these types of stories called to me when I was younger. When we were making Criminy, I imagined it more a book that families could enjoy equally or on their own. Sometimes the “all-ages” badge can deter an older reader, and that’s something that I want to break with this comic. I truly believe it’s appropriate and entertaining for everyone. 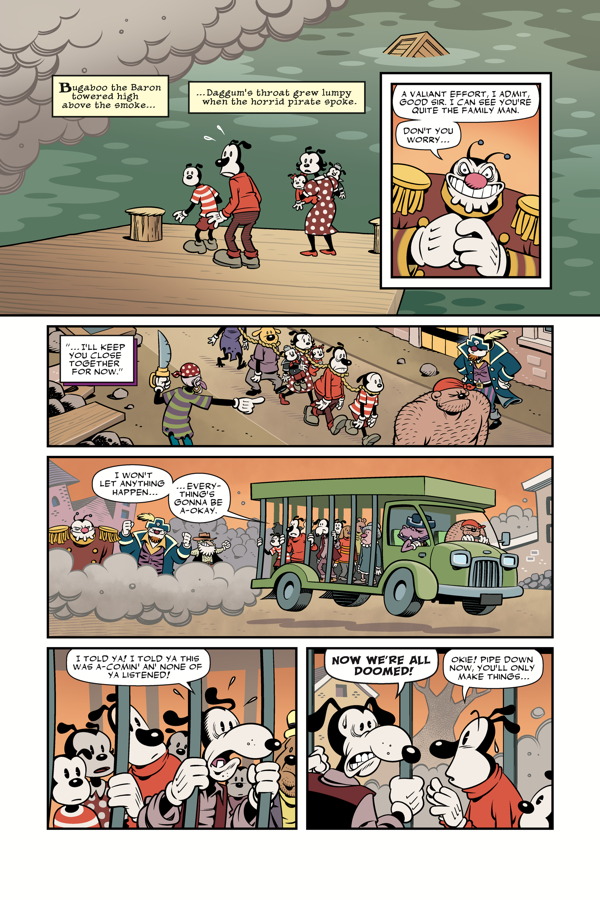 FS: The aesthetic of the book just makes me smile, in large part because it feels like shares DNA with older and newer cartooning sensibilities. What was the conversation like deciding what the look of the book should be?

RL: Thank you! The Fleischer look was our starting point, although my own style inevitably creeps into anything I draw, so you’ll see my other influences peeking around the corner throughout. Ryan very flatteringly incorporated many of my sketch concepts into the story wholesale, with hardly any tweaks along the way.

RF: The best part of Roger’s illustrations aside from simply looking absolutely beautiful, is that they are distinctly his. This book certainly doesn’t shy away from its influences, and it celebrates them completely, but Roger brings his own touch to every line on the page; it’s unmistakably his and undeniably remarkable. Being able to share a credit with him is and will be a top highlight of my career. 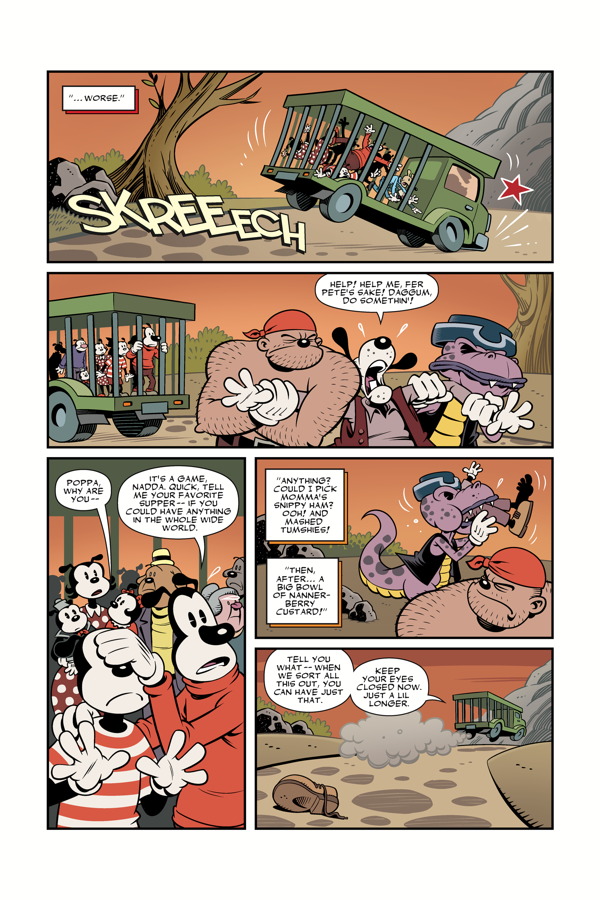 FS: Following up on that, what are your influences in the evolution of bringing Criminy to life?

RL: Once we had the initial pitch worked out, some of what we did was dictated by simple publishing realities. Our pitch proposed a four-issue series, but Dark Horse were keen on a self-contained book, so that affected how the story was paced. The deadline also had some bearing on some of the strategies I used to draw and colour the book in a timely fashion – I decided to draw it digitally and to streamline the colouring process by keeping the foreground figures flat, classic animation-style – and those decisions affected the final look of the story.

RF: From a conceptual standpoint, I was heavily influenced by Betty Boop and the Syrian refugee crisis. For Criminy coming together as a real life thing, once we agreed on a graphic novel format with Dark Horse, I began to think about the story in one large piece, separated by chapters. Reading something in one sitting is very different than serializing month-to-month, so the challenge was on to make sure everything flowed perfectly. Dark Horse was really excited to get moving, and the actual production time—bless Roger’s immaculate worksmanship—was rather quick. It paid off in the end though, I think, to really bury ourselves in the project. 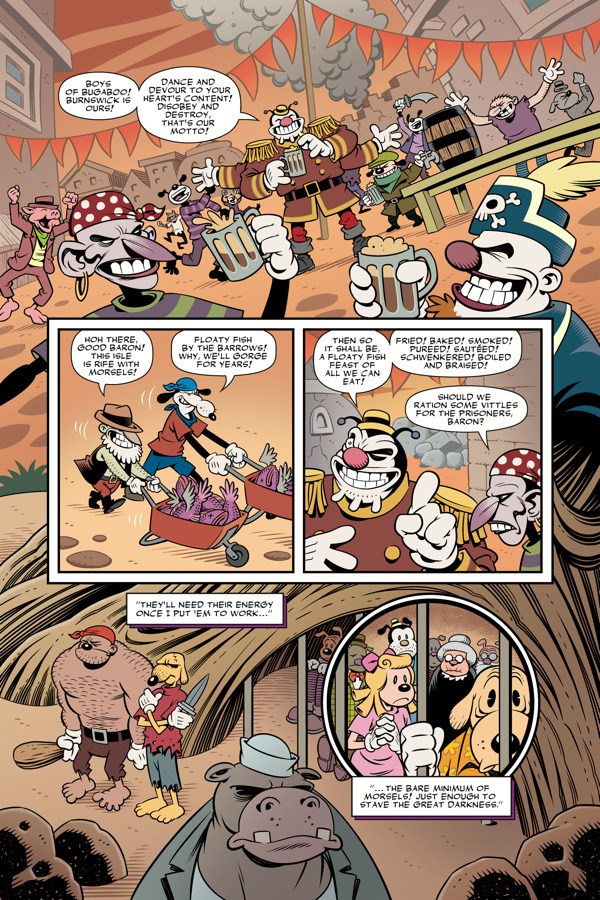 FS: The Criminys end up in all sorts of strange locales throughout the book. What were the inspirations behind those different hotspots of Criminy adventures?

RL: Ryan sent me a document really early on in the process with some of his ideas, which I then tried to visualise – so you’ll have to ask him where those initial sparks came from. I tried to add interesting details along the way that fit our desired aesthetic, drawing on those ‘30s cartoons we both love as my primary source of inspiration – not copying directly, but trying to imagine myself as an animator building that kind of world. I can tell you that Pleasure Island, from Disney’s adaptation of Pinocchio, was a direct inspiration for the isle of the Grimmer Niff, though – because Ryan said as much in the script!

RF: Roger nailed it. Pinocchio was a huge film for me and Slinkle Reef is an homage to that. As for the S.S. Whalebatross and Isle Bobo—two essentially living locations—I wanted to touch on environments as characters, and the helplessness and harmony within, respectively. Watching those old cartoons I can’t help but ask ‘how on earth did they think of that?’ and as such a part of conceptualizing these odd places was either thinking in reverse or not thinking at all. Just trying to get as weird with things as I could while still grasping something that could feel honest.

FS: Is there anything you can tease about what readers should expect before picking up the trade paperback?

RL: For people interested in the process of putting the book together, many of my process sketches and concept drawings are included at the back, along with some commentary explaining some of what we were thinking. I’m really happy with some of those sketches as stand-alone pieces of art, in fact – so I hope readers get a kick out of seeing them.

RF: I genuinely believe there’s been nothing like Criminy to hit a shelf, and I’m beyond proud to have been a part of a book that has something for everyone, that explores the spectrum emotion and experience. I’m also really proud of the poems that bookend each chapter in the story, and it goes without saying that Roger’s art and process material is worth the cover price alone. We really hope you pick it up and enjoy it!

The Criminy trade paperback is on sale now from Dark Horse Comics.

From the Eisner and Harvey Award-winning creator of Snarkedand writer of the acclaimed comic series D4VE comes this humorous, absurd adventure tale about a family on the run.

Daggum Criminy’s peaceful life is suddenly interrupted as pirates invade his island, casting Criminy’s family out as refugees into the wild unknown in search of a new home. Soon, the Criminys find themselves hopping from one strange locale to another, each with their own bizarre environment, people, and challenges; putting Daggum and family in constant peril as they search for a new, peaceful place to call home.