It’s sometimes fun to cheer on the bad guy. From ne’er-do-wells such as Spider-Man‘s C-list villains to hapless folks like Despicable Me‘s Gru who have their sights on world domination, it can be a delight to root for them, despite their tendency to trip on their own feet. Luke Lancaster and Orlando Caicedo see the infinite value of giving those ruffians their due, as they show in their webcomic series The Other Badguys. In The Other Badguys, we meet a whole host of villainous types who don’t quite have it all together, as shown by their track record of successes and shortfalls. If you have ever been the sort to pump a fist in the air for the underdog–even if they’re not-so-good–The Other Badguys is a series you should check out. 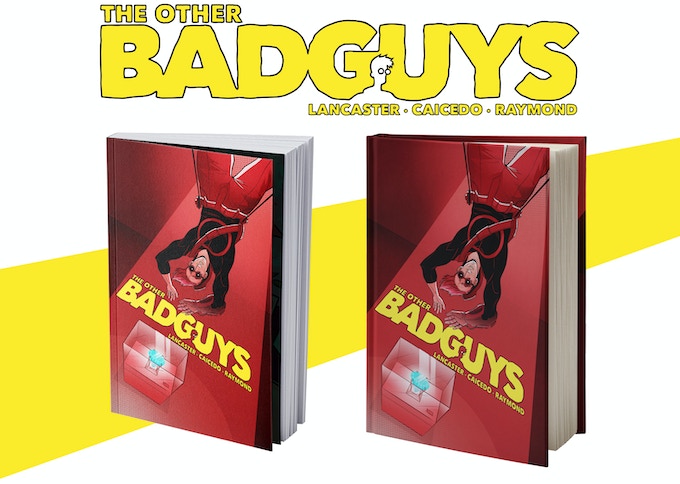 FreakSugar: Before we get into the Kickstarter, what can you tell us about the conceit of The Other Badguys?

OC: Luke and I met on Reddit in 2013. He was looking for an artist to draw a superhero heist comic focused more on the villains than the superheroes. He hired me to draw this funny and highly dysfunctional group of people. We had such a blast doing the first issue that we stayed in touch and in 2016 we won the superhero comic contest on Webtoon which allowed us to develop the story further.

FS: You’ve built such a fully-formed cast. Who are some of the characters we’ll me in volume 1?

LL: There’s Doctor Zero, obviously. The brilliant engineer trying to step out from his supervillain father’s long shadow. Deadbeat, his roommate/best friend/sidekick. Valentine, Zero’s ex who is much better than anyone else at this whole crime thing. And then The Bolt. The Bolt is a speedster and the main antagonist of the series. He steals every scene he’s in and he’s the most perfect douchebag I’ll ever write.

FS: It’s always fun to see the villain side of the equation in comics. What are some of the inspirations of the series?

LL: I’ve always really loved stories about ensembles with the odds stacked against them, and the idea of villains who really just have jobs they don’t particularly like. I took a lot of cues from Superior Foes of Spider-Man, Mystery Men, and Nextwave, and played with as many classic comic book tropes as I could.

OC: And I come from a background of having worked on animated television shows such as Frisky Dingo and Archer, which dealt with a lot of characters who were deeply inept at being superheroes/villains/spies that it felt like a natural transition to work on this book. 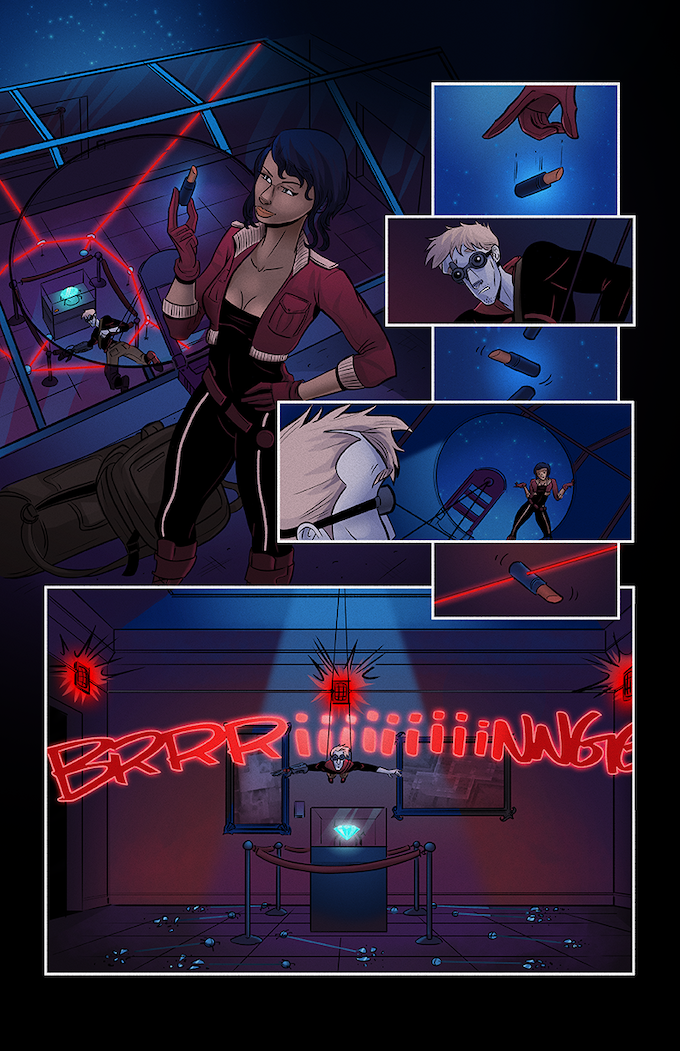 From THE OTHER BADGUYS Volume 1

FS: The book seems like such a perfect merging of your talents. What is your collaboration process like?

LL: It’s really wild to think that this was the first comic Orlando and I worked on together. We actually found each other on Reddit. Our process was pretty loose, where after we’d worked through the general story for the next “issue” as we thought of it, I’d give him pretty vague scripts and hand over the reigns on staging and panel splits, unless I had something very specific in mind. I’m sure he wouldn’t say it was that simple.

OC: Actually, I tend to agree. The process was pretty straightforward. Since we both understood where we were going with the story, we didn’t need to do a lot of back and forth between each other. I tried to just take the scripts Luke gave me and add more storytelling through the facial expressions and acting that I drew, along with the designs I brought to the table and my sense of action. I think we both speak the same comic language so it lends itself to a great blend of our talents. 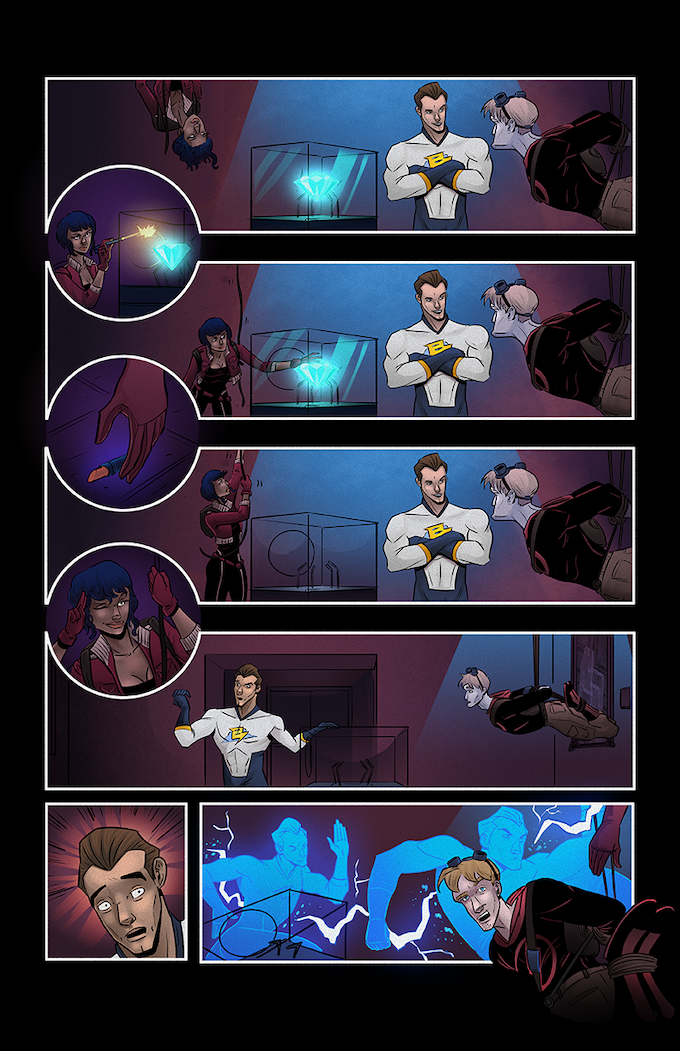 From THE OTHER BADGUYS Volume 1

Do you have any particular influences that have impacted how you approach The Other Badguys?

OC: From an artistic point of view, I’ve been heavily influenced by Joe Madureira and Humberto Ramos since I was a kid and so the aesthetic kinda matches a blend of that cartoony, manga-inspired, western comic style. And I grew up watching a lot of animated shows where I think I got more of my physical comedy sensibilities and acting from.

FS: On to the Kickstarter, what can you tell us about what backers can expect, including rewards and bundles available?

OC: We’ve got a lot of great rewards and bundles. The printed book alone is gonna be a thing of beauty. But then we also have some great prints available, including a recently drawn triptych cover that I honestly can’t wait to get my hands on. We also have some cool pins available, a chance for some original commissioned art, and the opportunity to be drawn into the comic.

FS: Rocketship has been working to bring many webcomics to print of late. What made Rocketship a good fit for you and your work?

LL: We had the pleasure of working with [founder] Tom [Akel] at Rocketship a few years ago when we first launched The Other Badguys as a webcomic and won a discovery contest with Stan Lee’s POW Media. I’ve kept an eye on a few other campaigns they’ve run, and they’ve been amazing partners through the whole process. Just super supportive and making everything as simple as possible.

FS: Do you have more tales of The Other Badguys planned for the future?

LL: For a long time, I would have said no. But since we’ve been working on this Kickstarter, Zero and co. have been rattling around in my head a lot lately…

OC: And I have to admit it’s been fun drawing these characters again. Hopefully with more backers on the Kickstarter, we could look into doing new stories in the future.

FS: Are there any other projects you’re working on that you’d like to discuss?

OC: At the moment, I’ve been developing a few series on the side with other writing partners but for now, nothing concrete to discuss just yet.

FS: If you had one final pitch for potential backers and readers, what would it be?

LL: The Other Badguys is a story about how the bad guys never win. And, hopefully, it’s a story where even though you know how it’s bound to end, you really want them to win anyway.

It pulls together all the things I love about comics. It’s packed full of gags, frenetic heist energy, a cast of characters supremely out of their depth, and, since we couldn’t help ourselves, a sweet moment or two.

The Kickstarter for The Other Badguys Volume 1 has already reached its initial campaign goal, with 16 days left as of press time. There’s still time left to unlock all sorts of phenomenal stretch goals. Check out the campaign page for more info!