Now that Edge of Tomorrow is out – and you should really see it – this is as good a time as any to talk about the source material that inspired it. Hiroshi Sakurazaka 2004 novel All You Need is Kill has already been adapted into manga, but publisher ViZ took an interesting track with the story: they’ve decided to release a Western-style graphic novel based on the book here in the States, timed with the film’s release.

For the adaptation, ViZ tapped Nick Mamatas (Bullettime, Love is the Law) to write the script with Miranda Mercury artist Lee Ferguson along for the ride. In this e-mail interview with Mamatas, the editor of ViZ’s Haikosoru prose imprint talks about avoiding boob armor, nailing the narration, and other Japanese novels in need of the comic treatment.

FreakSugar: First, how did you get this assignment? How did the idea to do a graphic novel treatment of this novel come about?

Nick Mamatas: The creation of original material has been a corporate goal of VIZ’s for a few years, so an All You Need Is Kill GN was something we often discussed—the novel is short and has a lot of fun visual elements. Only when the movie finally started shooting could we really pull the trigger on the assignment.

Because I edited the novel, and have some experience as a writer (mostly prose, a few comics), and because there were going to be some issues with the film—we couldn’t replicate the film, and we also couldn’t share what few film images and notes we had with freelancers — we thought it best to produce a script in-house, and I was the natural choice.

FreakSugar: Haikasoru had published the original AYNIK novel originally, so you were familiar with the original material, but what were some of the goals for the graphic novel? It has a western look as opposed to a manga style.

Mamatas: The film, Edge of Tomorrow, is inspired by All You Need is Kill, but it is clearly quite different. Obviously, Tom Cruise is not a Japanese teenager. In a way, the graphic novel represents a different visual universe: what we thought a film or animated feature could potentially look like, had it held more closely to the novel.

Though it wasn’t confirmed until we were already inking our pages, we had a feeling that there would be a manga adaptation of the book from Japan, and we didn’t want to compete too directly with it by also doing a manga-style adaptation. 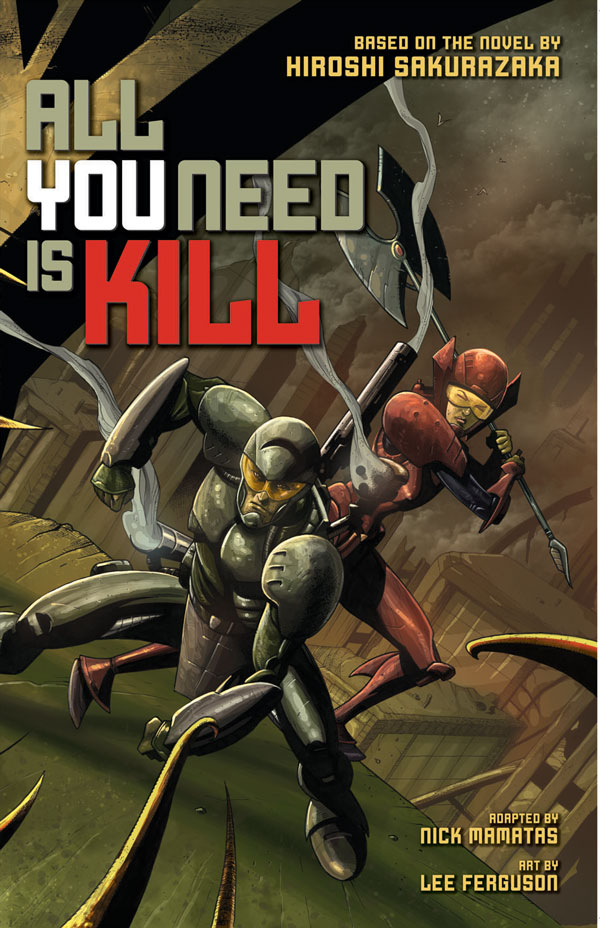 FreakSugar: Now, what were some of the challenges of adapting the source material?

Mamatas: The first is that most of the novel is told in the first person, which means that the experience of reading the book is necessarily different. One can’t have thought balloons filling panels, and one has to make visual decisions where in a text a narrator can simply say that something was squat and ugly and fired javelins and we as readers would fill in the blanks.

What’s not in the first person is in third-person omniscient—we boiled that down to a training film Rita watches during her early training. What the author could just come right out and tell us in a book we had to integrate into the storyline.

FreakSugar: At a little under a 100 pages, the OGN has about half the space to visualize Keiji’s many (many) loops. Was there anything you hated not being able to get into your adaptation?

Mamatas: A couple of minor characters had to be eliminated, and some stuff simplified. In the end, it boils down to compression versus decompression. As children of the 70s and 80s, editor Joel Enos and I are into compressed storytelling: Superman in one panel flies through several centuries of time, punching out various baddies while thinking about how much he misses Lois Lane.

Manga, because it is serialized, is often decompressed. What might take a 1980s-era Western comic three panels to depict, a manga can take twenty pages to show. Contemporary Western comics are often decompressed these days as well, with stunning exceptions like the latest version of Moon Knight by Warren Ellis.

Even with compression, we had to leave a few things out. The saddest thing we had to leave behind was not any of the loops—which we could portray montage style — but Sakurazaka’s distinctive, conversational voice.

FreakSugar: Talk a little about Lee Ferguson’s design of the exoskeletons – the Jackets. What kind of discussion did you two have about visualizing what was in the novel?

Mamatas: We held artist auditions; Lee read the book and came up with the armor design based on his reading and his own style. We loved it from the start. Partially because we had to avoid too much similarity to the movie, a grim and gritty exosuit bristling with guns wouldn’t serve us. We also found that the artists who went extreme with the hardware, also tended to go extreme with the look of Rita, making her either too sexy or overly muscled and hard. Lee’s retrofuture armor design matched his all-American girl look for Rita, so we fell in love with it instantly.

We only discussed two things: we didn’t want Rita in “boob armor,” which made no practical sense, and we didn’t like the horns on Rita’s helmet. We let him keep the horns!

FreakSugar: What are some other novels you’d love to see get the western manga treatment?

Mamatas: [Chōhei Kambayashi’s] Yukikaze is in development as a motion picture, so I’d like to see that. The first Yukikiaze book is a mosaic novel — a novel in stories. So it would be cool to get a different artist for each chapter. I’d also love to see Genocidal Organ by Project Itoh, which is near-future military science fiction and satire, as a comic. A longer one. Maybe two hundred pages.

FreakSugar: What are you working on next?

Mamatas: No more graphic novels right now. We’re putting together our next anthology of short fiction, Phantasm Japan, which brings together Japanese authors and non-Japanese authors to write fantasy tales with Japanese themes. We have great work by the popular Japanese author Miyuki Miyabe, a great short-story cycle by New York Times best seller Zachary Mason, and tons of other great stories. Honestly, a few of those would make great comic book short stories.