What responsibility do we have to the world? To ourselves? To each other? Who will save us? Should we look to the heavens or inward? Some good science fiction raises these questions. Great science fiction not only raises these questions, but calls us to action—while still entertaining us at the same time. It’s that beautiful balancing act that is on full display in Kepler, on sale Tuesday, December 27th, from Dark Horse Comics. Originally conceived of and developed by The X-Files’ David Duchovny and brought to life in collaboration with co-writer and artist Phillip Sevy (Triage, X-Men Unlimited), Kepler takes place on a farflung similar to Earth, but with a key difference: Homo sapiens are the only species of hominid that failed to evolve. With this world on the precipice of calamity and with life on the verge of extinction, West, a teen who comes from a Neanderthal-like species, must aid her home and its people, while also delving into the mystery of their perhaps not-so-benevolent gods.

Kepler is a tale that, once you finish, will sit with you for some time, making you reflect not just on the story itself, but life and our place in it. What duty do we have to one another? Kepler wants you to ponder that long after you put it down—and you assuredly will.

I spoke with Mr. Sevy recently about the idea behind Kepler, working with David Duchovny to bring the story to the four-colored world of comics, the themes interwoven within the tale, and how the book addresses where we can look to for our salvation. 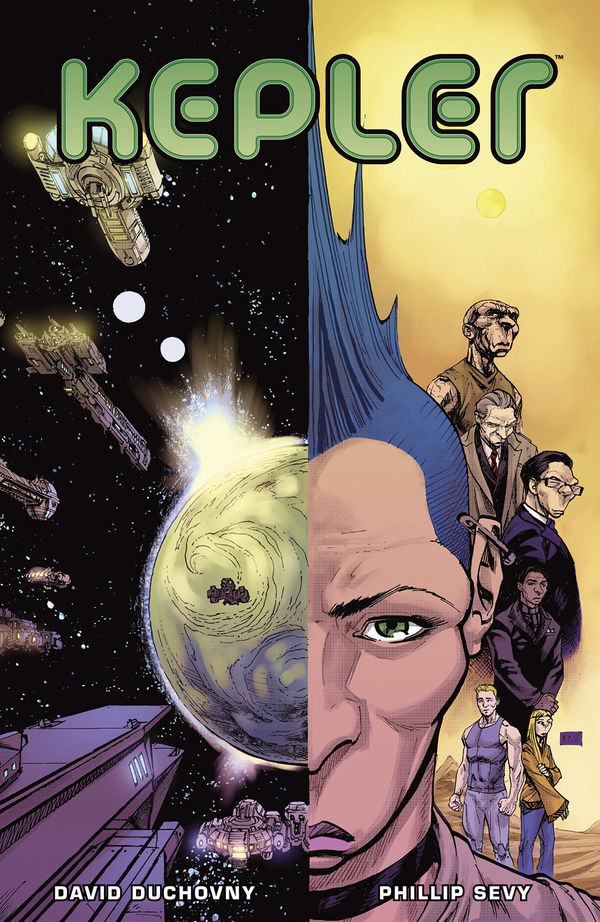 FreakSugar: For folks who might be considering picking up the book, what is the conceit of Kepler?

Phillip Sevy: Kepler is an original graphic novel that follows life on a planet were all hominid species evolved but Homo sapiens did not. At a crossroads of civilization – both religiously, ecologically, and technologically – they turn to their returning gods for help, but the gods are not what they seem and the answers they bring threaten the entire planet.

FS: The book has quite the robust array of characters. What can you tell us about the cast we meet?

PS: Our focal character is West, who is a mixed-species child in a world that doesn’t have any of those. Her father Spenser is a Thaal (akin to a Neanderthal) – a more religious based people – and her mother Mao Mao is a Bonobion – a more nature-based people. There are conflicting forces of science and government, led by President Jackson and his advisor Iago. 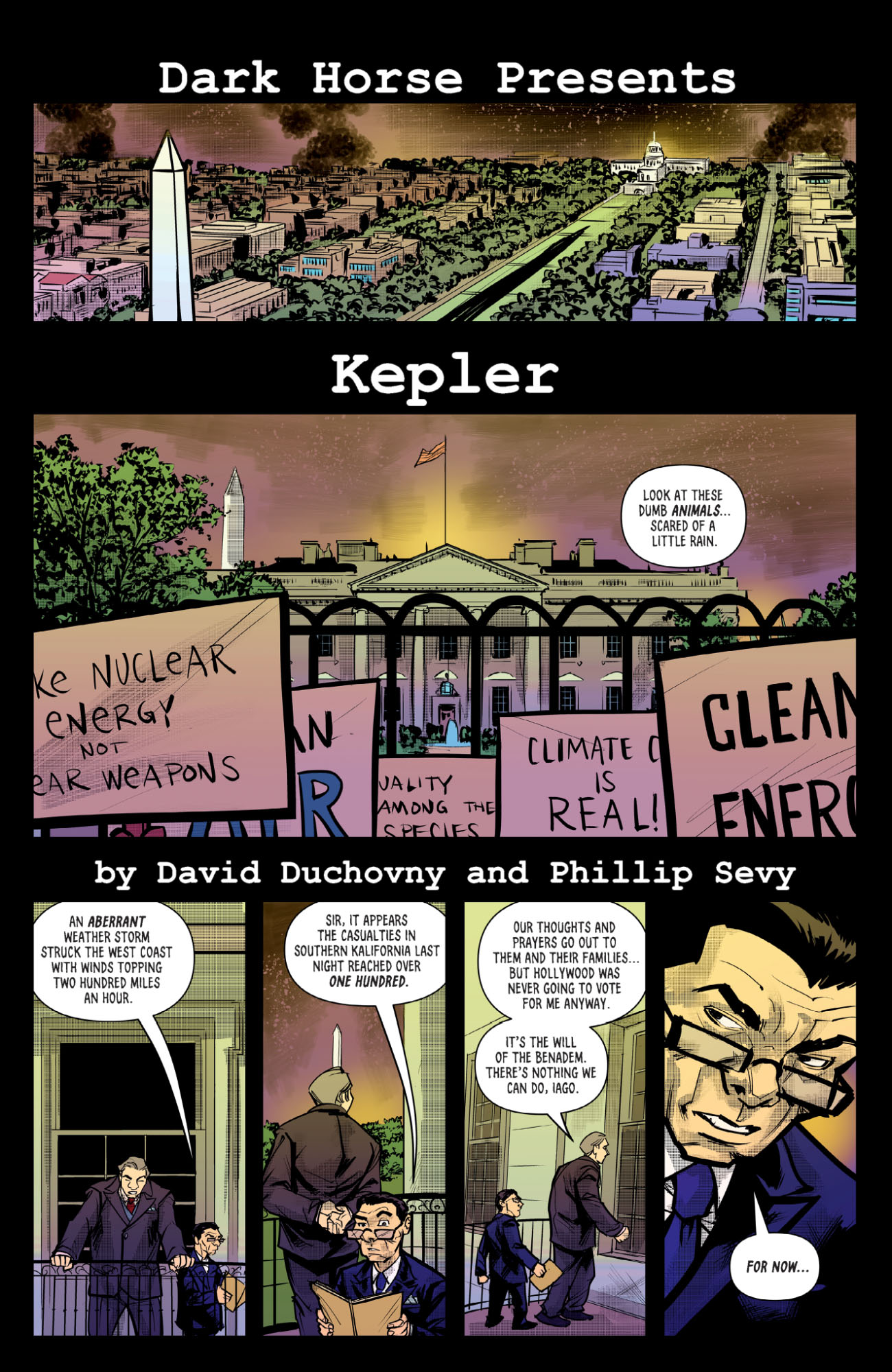 FS: Kepler is a collaboration between you and David Duchovny. How did you become involved with the comic?

PS: My long-time Dark Horse editor Megan Walker had been working with David for over a year, developing the concept to work in a graphic novel. They got to a point where Megan needed to bring in a comics professional to get it to the next stage, so she reached out to me! I read the pilot and their notes and saw how this could be a comics, so I happily accepted the offer and we were off to the races!

FS: David Duchovny is no stranger to sci-fi, onscreen or off. What was the collaboration process like working with David?

PS: From the beginning, David was great. It’s a concern when working with a superstar of his caliber that it would be difficult or an ego trip or worse. But I was happy to find out it was absolutely none of those. From the beginning, David stated that the TV script was its own thing and this could be a different version – he was okay with making changes, coming up with new ideas, and giving a new interpretation to the idea.

Once I got started on the project, I intensely read through the script and notes, making notes as to what I felt the overall narrative and character arcs were, where we could end a graphic novel, what was feasible in the space we had, defining plot elements, and figuring out what changes we needed to make. From there, I broke down a very detailed outline. I shared the outline with David who gave me feedback and helped brainstorm ideas and solutions. Once we reached an outline we both liked, I went to scripting the book. David reviewed the scripts for each chapter and then the overall script, giving me notes on plot things but his main focus was the characters and their dialogue. Up until the end, he was polishing dialogue to get the right clarity, tone, style, and character coming through. I was amazed that no matter how many versions of the script he read, he could approach it with fresh eyes every time. He could find tiny inconsistencies in dialogue and philosophy forty pages apart, spoken with one small line, from two different characters. I was always amazed at his attention to detail. It really elevated the book. 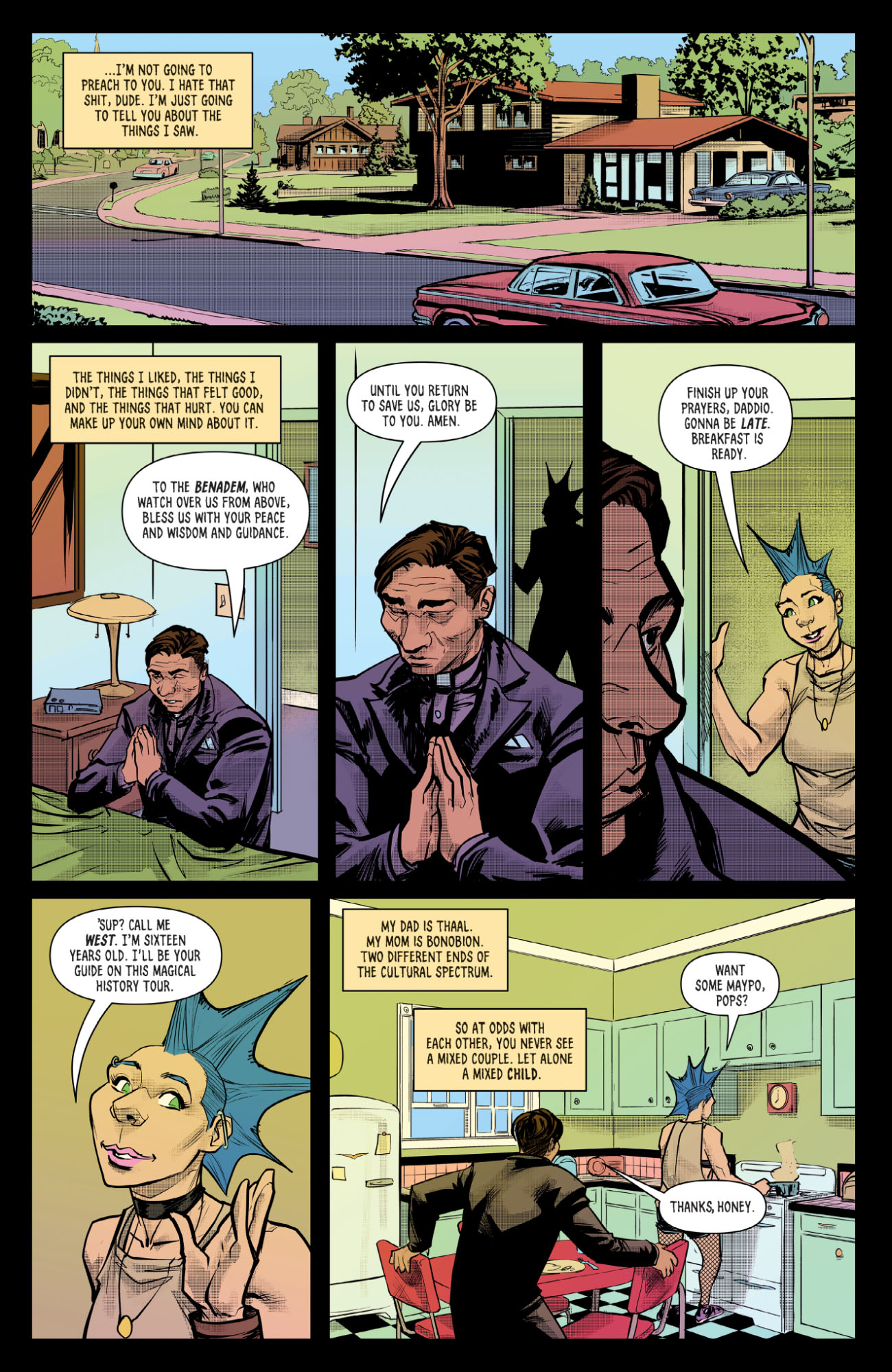 FS: The design of the book—particularly the characters—feels alien and familiar at the same time. What was the design process for the look of Kepler?

PS: I think I might have done more design for this book than any I’ve done yet – including (my creator-owned sci-fi epic) Triage. I did countless drawings – some sent to David and others for my exploration – as we tried to narrow and define the look of our species in the book. Originally, he had every variation of Homo species in the book – so I was working on designing each of them – but we decided to narrow it down to three species that had distinct features and looks, but kept close enough to Sapien look that their interactions didn’t seem alien. There was a lot of hair-pulling on my end as I was constantly drawing and redrawing the look for the species to look distinct but attractive (and not in a “hot” way but in a way that felt familiar to what we see every day).

I’d do a round of drawings and we’d discuss what worked and what didn’t, and I’d go back to the drawing board for a new round.

On top of designing new species for the book, we decided to set the book in the 1950s/60s aesthetic, so there was lots of reference gathering and studying to get the look right in terms of clothing, environment, and style.

FS: In Kepler, there are so many moving parts that will make any sci-fi fan or lover of social sciences sing. What was the research process like in crafting the story you and David told?

PS: David had read Sapiens by Yuval Noah Harari and it got him thinking about the reasons and causes for the extinction of all the other Homo species – and our (Sapiens) hand in that. He started building a world where what if the opposite had happened. Intersect that with religion, science, and our obsession to structure our beliefs into reality and meaning, and Kepler was born.

When Megan reached out to me about joining the project, I had just finished reading Sapiens myself, coincidentally, so it was entirely on my mind at that moment. It felt fortuitous. I’d already been obsessively studying American 1950-1970s history, so I had a lot of that background on my mind, already. All the pieces came together and allowed us to build this story. 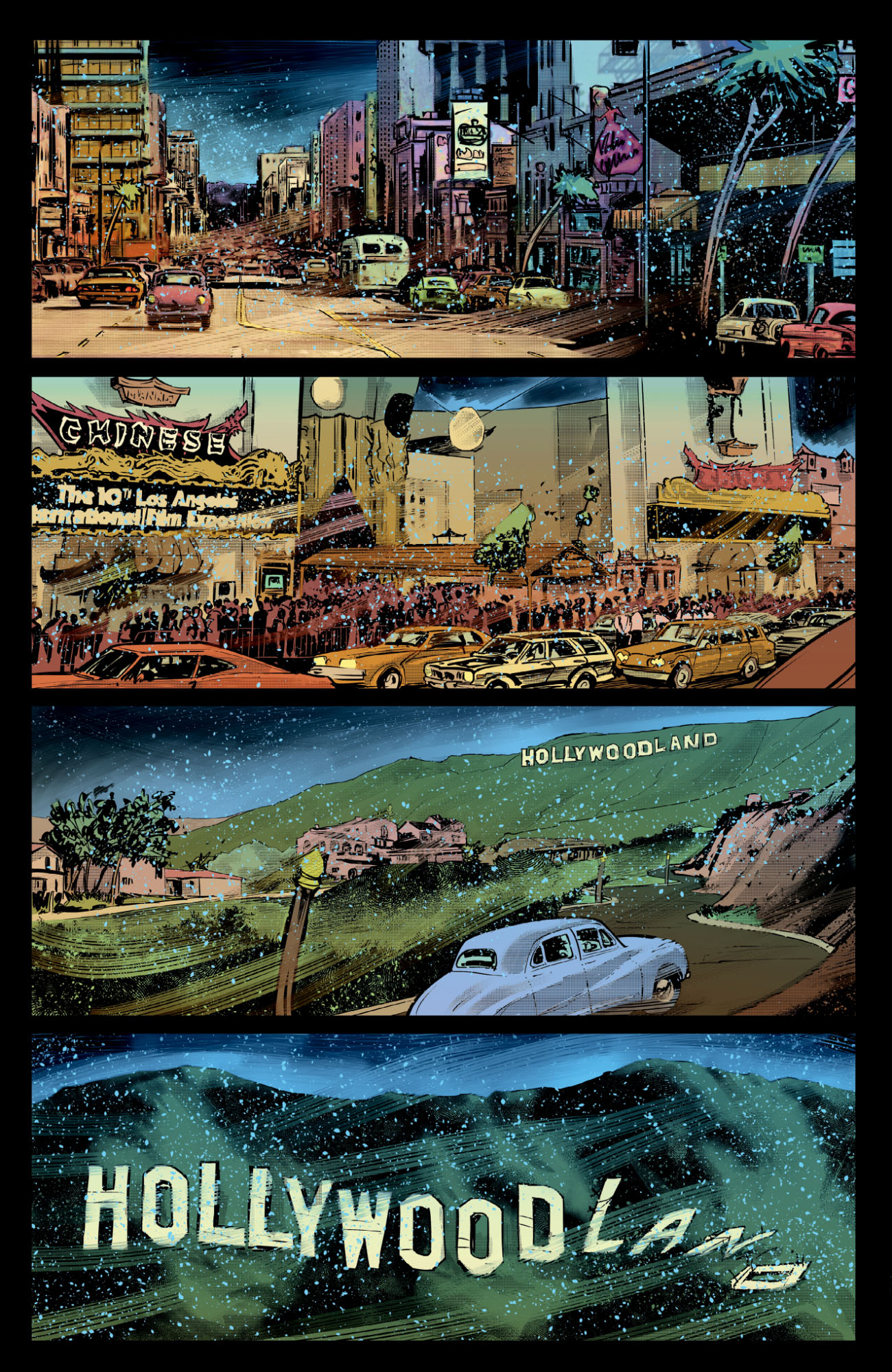 FS: Following up on that, the themes feel so interconnected, Kepler feels very much like the type of cautionary tale we need right now: that tackling one of humanity’s woes will not cut it—they’re all intermingled. Or am I reading too much into that or misreading it?

PS: Nope, it was written very much as a parable to the themes and concerns of our day – racism, climate crisis, colonialism, individuality, collectivism, the dangers of hubris, science vs religion – it very much represents the issues we were seeing around us.

FS: In that same vein, considering the themes you’re exploring, is there anything you’d hope readers take away from Kepler (besides being entertained, of course)?

PS: I think the best use of stories is to not only entertain but to challenge assumptions and increase empathy – to allow us to think outside ourselves and imagine another’s experience. The themes and choices in the book were not made on accident while building an engaging story. We worked hard to pose questions about how we see the world around us and where our responsibility lies in helping address the problems of life. I hope people, as they read it, will be able to see the humanity that can be found in everyone around us, regardless of our relationship to them. 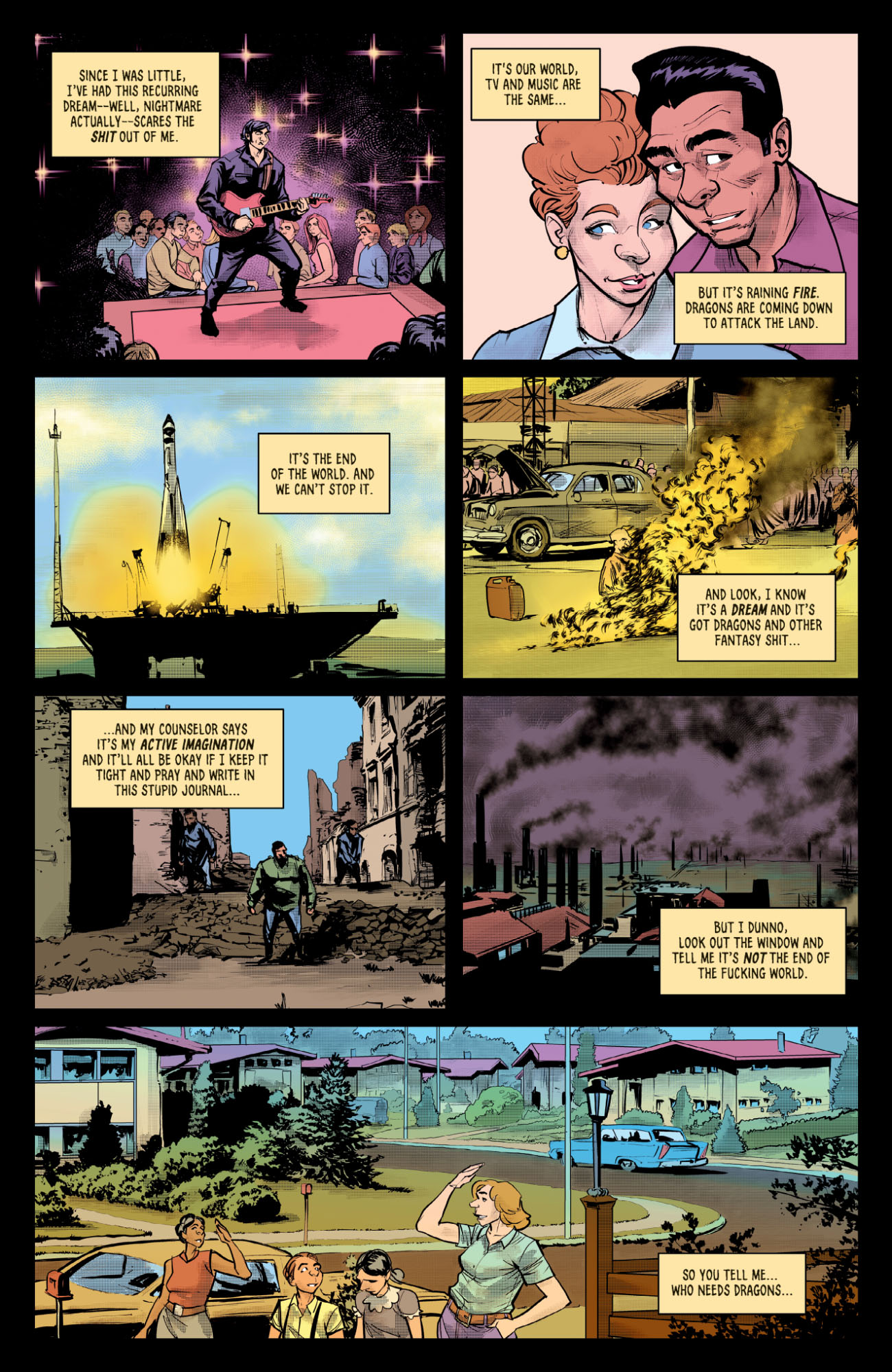 FS: Are there any other projects you’d like to promote that you have coming down the pike?

PS: I’m currently drawing Phenomenocity with writer Tini Howard that we’re releasing exclusively through her Substack (https://tinihoward.substack.com/). It’s a sci-fi noir mystery that we’re working on the next few chapters right now. It’s free to read and one of our favorite projects we’ve done. I just drew two issues of X-Men Unlimited with writer Torunn Gronbekk and am working on a few more that’ll be released in the future. I also have a few other cool projects brewing, as well, but those aren’t announced quite yet.

FS: If you had a final pitch for potential readers, what would it be?

PS: Kepler is a retro sci-fi tale that asks us to think about who we put our trust in to save us from the problems we face and the problems we create. Do we turn to external forces and hope they’re real and care about us or do we do the hard work of working together and saving our own future?

An allegorical sci-fi thriller in the tradition of Planet of the Apes!

When the Benadem, benevolent space gods, return to KEPLER, a planet where homo sapiens went extinct and all other hominid species thrived, their arrival threatens to plunge the world into chaos.

West, a 16-year-old Neanderthal girl, is thrust into the conflict and is the only hope to prevent extinction. Her efforts, unique because of her mixed hominid heritage, not only change her life, but also reveal the merciless ambition and identity of the gods themselves.

In the tradition of Planet of the Apes, KEPLER is an allegorical thriller of environmental disaster, colonialism, religion, history, and adolescence told through the eyes of a lonely outsider.