Kal-El of Krypton, known to the world at large as the superhero Superman, has been gone from Earth for a while in his DC Comics’ adventures, contending with, among others, the villainous Mongul. This week, however, we’ll see the return of the Man of Steel to our world in Superman: Kal-El Returns Special #1, with stories from a whole host of talented creators, focused on how the world at large and Superman’s trusted circle of allies and loved ones react to his reappearance. One of those creators contributing to the comic is writer Sina Grace, who focuses on Kal-El’s interactions with his pal Jimmy Olsen. How does Superman react to being reunited with his friend? How does Jimmy factor in Kal-El’s reacclimating to Earth? Grace will give us a glimpse into these questions.

Sina Grace is known for bring nuanced character, pathos, and heart to any project he tackles, from his work on Marvel’s Iceman to his creator-owned book Rockstar and Softboy. Grace is sure to bring that same talent and concern to the Man of Tomorrow.

I spoke with Mr. Grace recently about his involvement with Superman: Kal-El Returns Special #1, tackling a character with such a rich history as Superman’s, working with artist Dean Haspiel on their story, and why he calls Superman “optimist rock.”

FreakSugar: Before we begin, I just want to thank you for speaking with us again! You’ve always been such a friend of the site and we appreciate you so much.

Superman: Kal-El Returns Special #1 drops this week. What can you tell us about how you became involved with the book?

Sina Grace: My editor Paul Kaminski reached and asked if I’d want to be involved in showing how different characters in the DCU react to Superman returning to Earth. I was trying to aim big and asked if I could pitch the Batman meetup, and he suggested Jimmy Olsen. Having devoured the Matt Fraction/ Steve Lieber Jimmy Olsen series, I had that “this is right” feeling when diving into the script.

FS: There are different tales highlighted in the issue. What can you tell us about yours?

SG: I cover Jimmy Olsen’s reunion with Superman, and it leads to the pair tackling how to announce Supes’ return to the world. Jimmy Olsen is usually our eyes and ears into Metropolis, but in this story he’s actually Superman’s. We as the reader know what the world has been up to since Superman left, he doesn’t. My story definitely aims to hit the reader in the feels showing how these two characters really need each other.

FS: You’ve tackled many comic book characters in the past. What is your past with Superman as a reader?

SG: To be honest, before I was asked to pitch a Superman story for DC’s Young Readers line, I never spent much time thinking about him! He just seemed so perfect, and I used to be drawn to characters who found greatness through fallibility. Sure, I had the Red Son, Birthright, and For All Seasons books on my shelf… but it’s only in the last two years that I started earnestly diving into his lore. Now I see him as this total sweetheart, and I’ve come to realize it’s more interesting to explore a character who hasn’t lost hope for mankind. 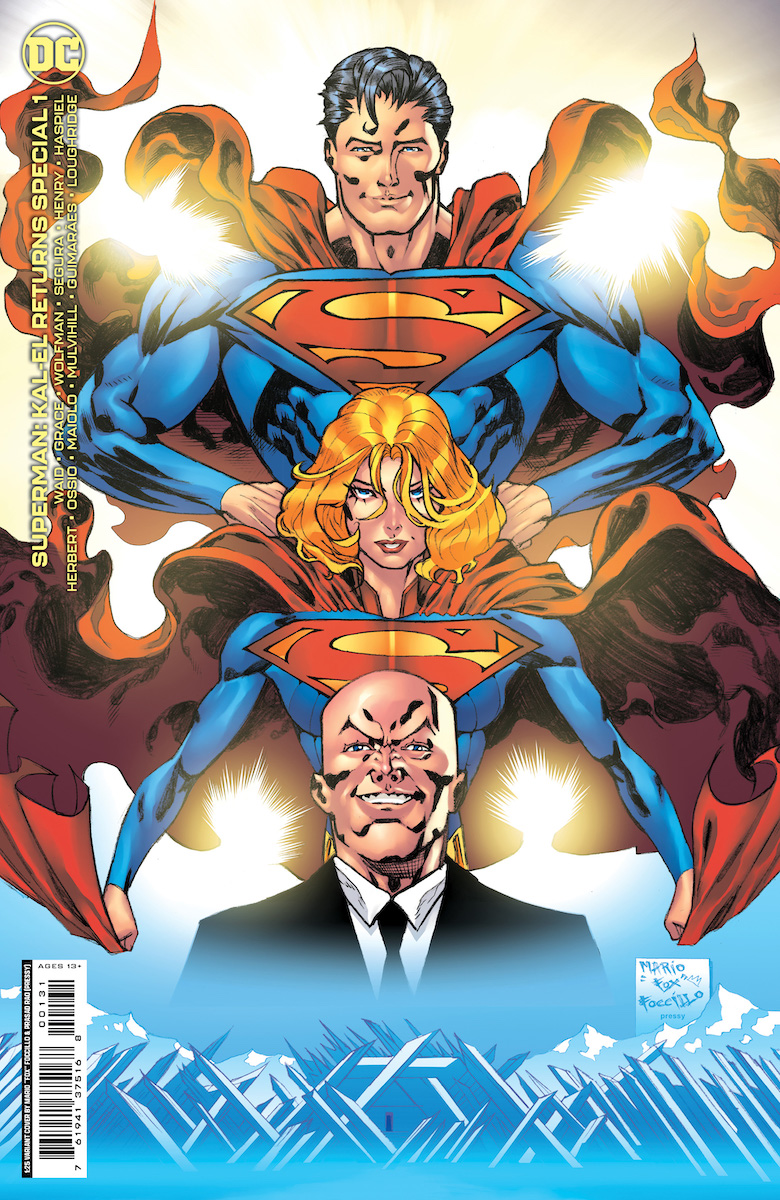 FS: You’re working with the phenomenal Dean Haspiel on this story. What has the collaboration process been like with Dean?

SG: Dean was an incredible, collaborative partner for this story. When he found out that I tend to thumbnail my scripts, he wanted to see those and riff off my ideas. I usually never show artists because I don’t want to step on their toes, but Dean was all about finding the mind meld. He’s such a pro, and so methodical.

FS: Superman is considered the first superhero and has been reinterpreted again and again over the years. Who is he to you? What makes him and his cast so endearing and enduring?

SG: Superman is like a genre of music I’ve deemed as “optimist rock.” U2, Coldplay, and even Metric inhabit that space. Their music uplifts and warms the hearts of entire stadiums… and that’s actually a really hard feat to accomplish. I also think it’s the Boy Scout-meets-immigrant mashup that makes Superman endure through the decades… he’s somehow relatable to everyone?! He can save the world, but the girl of his dreams still makes him a flustered goof.

Kal-El has returned from his long sojourn to Warworld, but what ramifications does this hold for the broader DC Universe? In this special issue, we’ll spotlight Kal-El’s reunion with the Dark Knight, Jimmy Olsen, the Justice League, and…Lex Luthor?! Plus: witness the never-before-revealed look at the moments leading to Superman’s abduction by Pariah in the Dark Crisis event! The march toward Action Comics #1050 continues in this essential special volume!