We all have a desire to fit in with our chosen tribes, to feel like a part of a community. At the same time, however, many of us want to “matter,” however we define that, to feel that what we do makes a difference, both in the macro in the micro. Matilde, the protagonist behind writer and artist Will Morris’ Gospel, out now from Image Comics, feels that same longing. Gospel is set 500 years ago in the midst of the English Reformation, with Matilde working to make her dreams of fighting demons and wyrms a reality, even if she has to massage and shape events to make those dreams a reality that passes into legend.

Filled with high adventure, mystery, and nuggets of knowledge for any history buff, Gospel will sure to entertain and bring fill your hunger for fantastic fantasy fare.

Mr. Morris spoke with me recently about the idea behind Gospel, using the English Reformation as a springboard for the story, the influences that shaped the tale, and what we can expect to see in the comic as it goes forward in the miniseries. 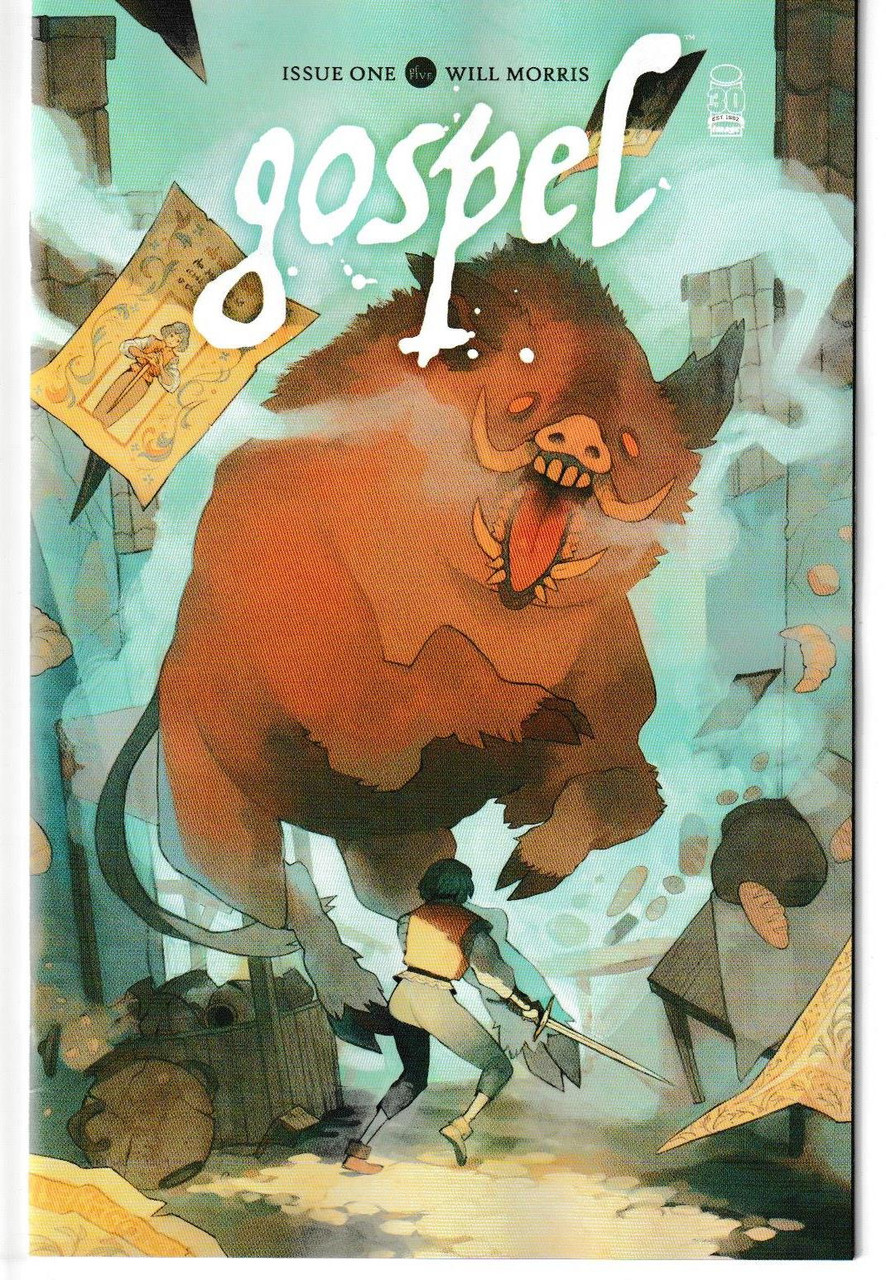 FreakSugar: For folks who are considering reading the book, what is the conceit of Gospel?

Will Morris: Gospel tells the story of a restless hero, Matilde, who discovers that when opportunity refuses to knock, the devil comes knocking instead.

Matilde yearns for her “great deeds” to be shared through fireside stories and songs that echo around bustling inns. Unfortunately, the stuff of legends (sorcerers, wyrms, demons etc.) and opportunities for great deeds have proved frustratingly scant in 16th-century England. As a result, Matilde has taken to engineering events she hopes will pass into folklore with the help of friend and storyteller, Pitt. What she doesn’t realise is that her actions will trigger catastrophic events that threaten the soul of her community.

Gospel is a fantasy adventure about yearning to belong and the truth behind the stories we tell.

FS: What prompted you to use the English Reformation as your starting place for this tale?

WM: I explored a few possible time periods before settling on The English Reformation as the perfect setting. I loved the idea of Matilde questing to become an icon, at a time when icons are literally being scratched from history.

Years ago, as part of a university project, I was allowed to climb a scaffold at Holy Trinity Church in Coventry and watch as a hidden medieval doom painting was revealed beneath layers of wash and varnish. Where they still exist, these wall paintings illustrate the day of judgment. Souls rise from their graves to be welcomed into the glowing walled city of heaven or to be gleefully dragged by fiends towards racks, bubbling cauldrons and the mouth of hell. For centuries these images and other iconography aimed to guide a largely illiterate audience on how to live their lives. Then, in just a handful of years, it was all gone. Painted over, ransacked or completely destroyed during King Henry VIII’s religious reforms. That tumultuous shift in society felt like a dramatic world for the story to be set against and reflects some of the division and uncertainty we’ve experienced in the UK over recent years.

FS: Who are the cast of characters we can expect to meet in Gospel?

WM: The story centers on Matilde and Pitt. Matilde is an adventurous spirit who just wants to feel valued by her community. Unfortunately, it’s that very desire that keeps tripping her up. Pitt, on the other hand, is a storyteller who spins the richest yarns but often struggles to express himself directly.

Alongside our heroes, there is a frustrated artist, a zealous parish priest and a calculating guild leader. Then, of course, there is the devil, who I’m sure everyone is familiar with – not personally of course…

FS: I actually teach a World Civilization and we just finished our unit on Henry VIII, so I was excited to hear about this series! What kind of research did you do in preparation for Gospel?

WM: Wow, lucky students! It’s a hell of an era. The inspiration for the story started with road trips around Devon and Cornwall. I would pick up small-press books on local folklore and pore over the extraordinary stories within. One story, found on an information board at the foot of a forbidding hill, sparked the idea of a conflict with the devil.

From there my research into Henry VIII’s reforms and Tudor life stretched in lots of directions. Books upon books covering wall art, late medieval architecture, the lives of Tudor folk from sun up to sun down and the histories of black people in Tudor society. I also have a vast collection of visual references from places such as York’s Shambles and Ledbury’s Market Hall, alongside a digital wardrobe of costume images. Those costumes alone justify drawing a comic set in Tudor England.

FS: Following up on that, what are your inspirations as you write your story?

WM: There are so many comics that helped to inspire the story. In particular stories about characters doing all they can to respond to a world that is changing around them. Nausicaä of the Valley of the Wind by Hayao Miyazaki, Persepolis by Marjane Satrapi, Notes for a War Story by Gipi and By Chance or Providence by Becky Cloonan all spring to mind.

At its heart Gospel is a spirited adventure, so all of Studio Ghibli’s work has been a huge inspiration.

FS: Without giving too much away, there’s a time shift in the book. Is there anything you can tell us about that?

WM: All I’ll say is that it is a story about the stories we tell. No matter how big or small, whether on social media or chatting with pals, everyone has a motivation behind their stories.

FS: The art is breathtaking. What influenced you in shaping how the book should look?

WM: Thank you so much! It’s fun looking back on the issues of Gospel and pinpointing specific influences at the time I was creating the pages. In the faces and figures especially, I can see how much I admire the art of Miyazaki, Becky Cloonan, Naoki Urasawa, Chris Samnee and Linnea Sterte. I don’t think I believe in chasing a fixed style. I’d recommend enjoying lots of art and letting what you love infuse your drawing for as long as possible.

There are a lot of difficulties, disappointments and hard-won successes in creating a comic. Colouring in particular is something I had to learn on the job, but I’m very pleased with how it turned out.

FS: Is there anything you can tease about what we can expect to see in Gospel going forward?

WM: I can tease the promise of a balletic assassin, a lovelorn giant and a surly ghost. Very little goes as planned for Matilde and Pitt. But with every challenge, as friends, they stumble, fall and rise again.

Gospel #1 is out now from Image Comics.

When opportunity refuses to knock for restless hero Matilde the devil comes knocking. Inspired by the work of Hayoa Miyazaki, and set in the chaos of King Henry VIII’s reign, GOSPEL is a thrilling fantasy adventure that questions the truth behind the stories we tell. Thrust into action by a hellish arrival Matilde and storyteller Pitt will quest for answers… answers that threaten to tear them apart and trigger the toughest question of all: “who am I?”