Wanda Maximoff—the superhero known as the Scarlet Witch—has been many things to many people of the Marvel Comics universe: Hero. Villain. Mutant. Non-mutant. Victim of manipulation. Mutantkind destroyer. Mutantkind savior. After years in flux, Wanda’s character has truly been on the path to redemption in the past few years, particularly in the stories Darkhold and Trial of Magneto. For readers who have been less than happy at Wanda’s portrayal and handling in the past two decades, this has been a renaissance for the Scarlet Witch to truly do her justice once again. She’s been given agency that she’s been lacking, and the trend of using guilt as a character trait has given way to confidence and a sense of self-worth.

That trend is in no danger of stopping anytime soon, with Wanda now in the supremely capable hands of writer Steve Orlando. In his Scarlet Witch series, debuting in January 2023, Orlando will explore a Wanda ready to forge ahead, casting away the weight of the past to cast a future she deserves. For fan of what’s been done with the character in the past few years and fans of Orlando’s work, Scarlet Witch will be a wonderful jumping-on point as Wanda looks to the future.

Mr. Orlando spoke with me recently about the conceit of Scarlet Witch, where we find Wanda Maximoff at the beginning of the series, her wok to begin a new phase of her life, free from the baggage of the past, and who the Scarlet Witch is at her very core. 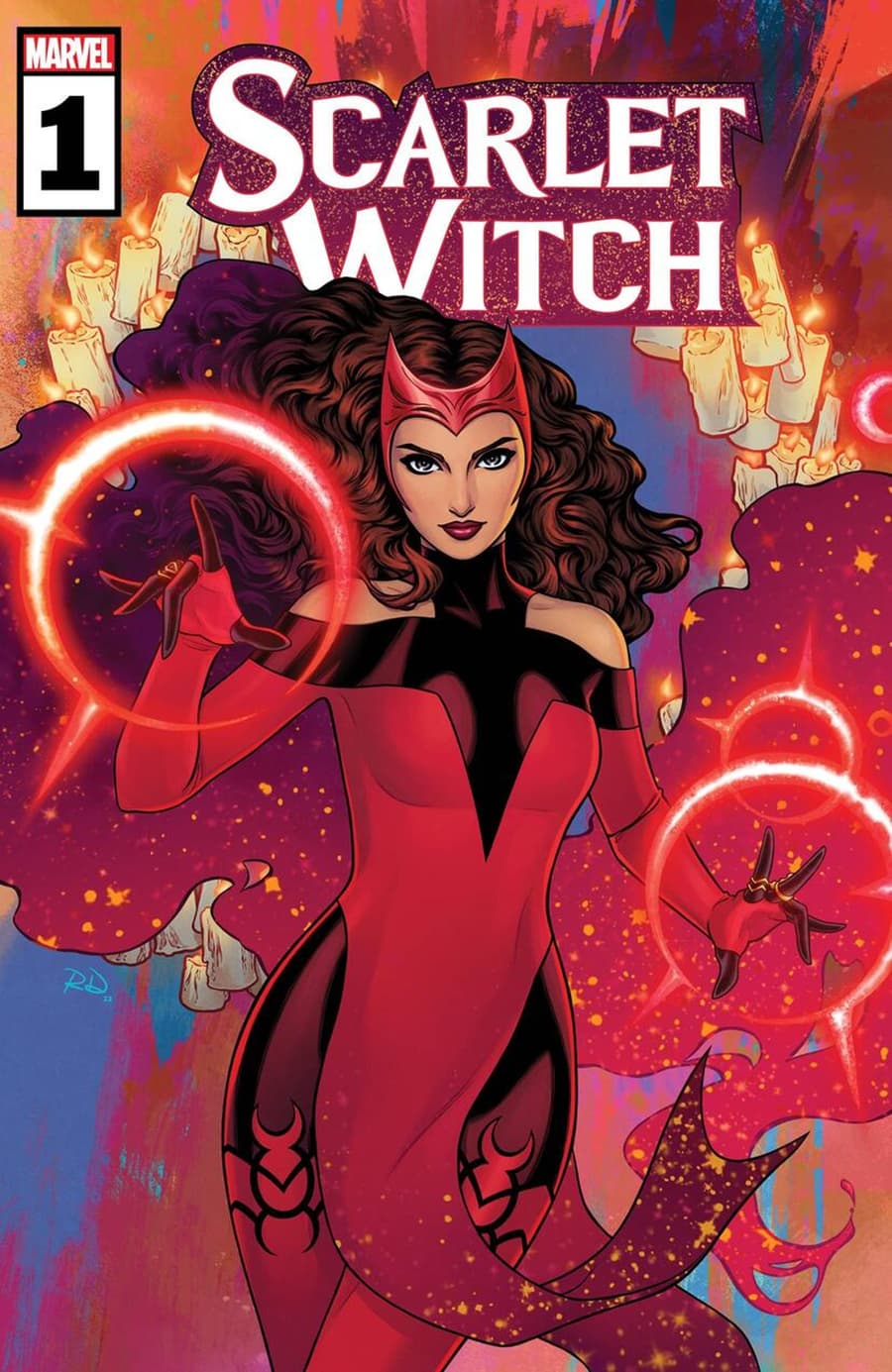 FreakSugar: Wanda has had a tumultuous relationship with the greater Marvel Universe for almost two decades, starting in Avengers: Disassembled. We’ve seen great strides in recent years both to rehabilitate her image and to free her character. Where do we find Wanda at the beginning of Scarlet Witch?

Steve Orlando: She’s ready to write a new chapter in her life story! As you note above, a lot of Wanda’s most iconic stories are ones of her suffering, ones of her being attacking, used, and manipulated. With Darkhold and Trial of Magneto, Wanda has put some of her major stressors and mistakes behind her – and she’s earned the redemption and freedom that comes with that. She hasn’t abdicated responsibility, she’s engaged with it, made amends where required and made strides where her life demanded it.

Now, Wanda’s out to make sure no one has to go what she went through – to use her wealth of power and experience to help others who feel they have nowhere to turn. She’s the person she needed for so long and didn’t have. Superhero. Sorceress. Godlike being. And a friendly ear to boot. For some, it might be that last one that’s the most powerful.

FS: Wanda’s family tree and familial bonds are… complicated. The press release about the series mentioned that you’ll be examining her relationships with Quicksilver, Polaris, and Viv Vision. How do you approach the complex web of ties that connect Wanda with all of these characters?

SO: Much like the rest of her life, Wanda’s family hasn’t been the usual – but these days, that’s something she’s embracing. And so are we! While it might’ve been intimidating for Wanda’s family to be so complicated in the past, for us and for her, she’s now accepting the strangeness of her family tree. Perhaps even radically so. She’d rather consider someone like Viv Vision family than not, she’d rather offer a bigger table and not higher walls. She’s allowing things from her past that might’ve once been a stressor to now be something she rolls with and finds joy in. Her life, and her family, are like no one else’s – and that’s something to celebrate! 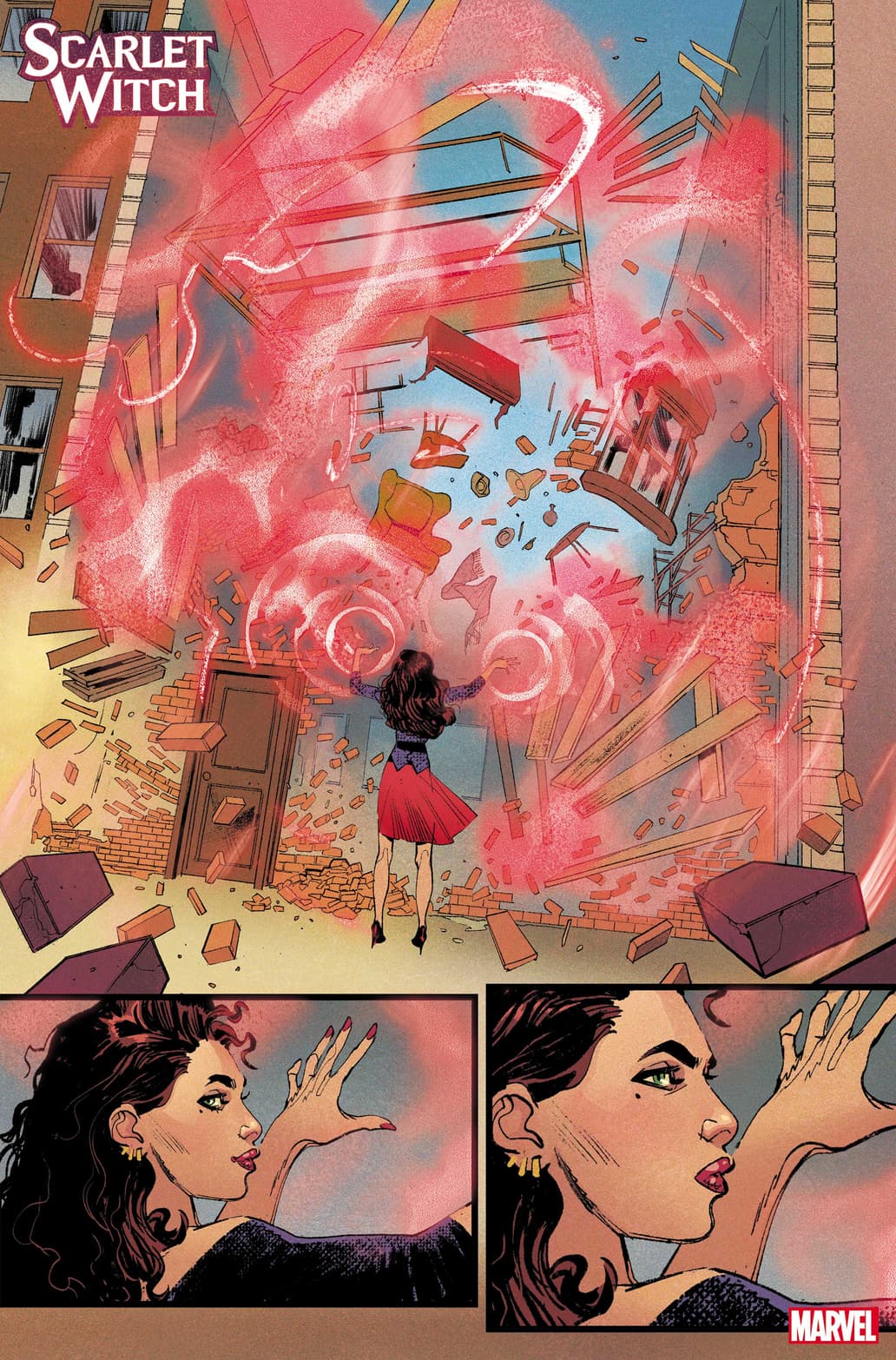 FS: It’s incredibly exciting to see Darcy Lewis make the jump from the MCU to comics! What can you tell us about her role in the greater story of Wanda in the series?

SO: Darcy is going to fit perfectly into this book – and she’ll play a role here that’s not unlike her role in Thor and WandaVision. She is the sly, witty, deadpan observer who reminds us just how wild and fantastic the day to day can be in the Marvel Universe. But she’s not just an observer – she’s active, she engages with the Marvel Universe and takes no shit from those who would hold others back, or champion hypocrisy. In fact, it’s Darcy’s mysterious hunt to expose a deadly injustice that brings her to Wanda’s door in the first place.

FS: The whole team on the book is absolutely stacked And Wanda’s new look is so striking and dynamic! What has the collaborative process been like on the series?

SO: I couldn’t ask for more amazing collaborators than [series artist] Sara [Pichelli], [artist] Russell [Dauterman], who is doing covers and redesigned Wanda’s look for the series], and [colorist] Matt [Wilson] – they’re doing the work of their career. And that’s the work Wanda deserves! Collaboration wise, it’s been wonderful to give these folks the space they want to do their work freely and to its fullest – to trust that these masters will do their best and stepping back so they can do it! It can feel easy to micromanage as a writer, but the truth is we’re just the first holders of a baton that’s got a lot more stops to go until print, and for me, the real joy is to get out of the way and return the trust me co-creators and editorial have given me. With this book, it’s not just yielded fruit, but an entire orchard. 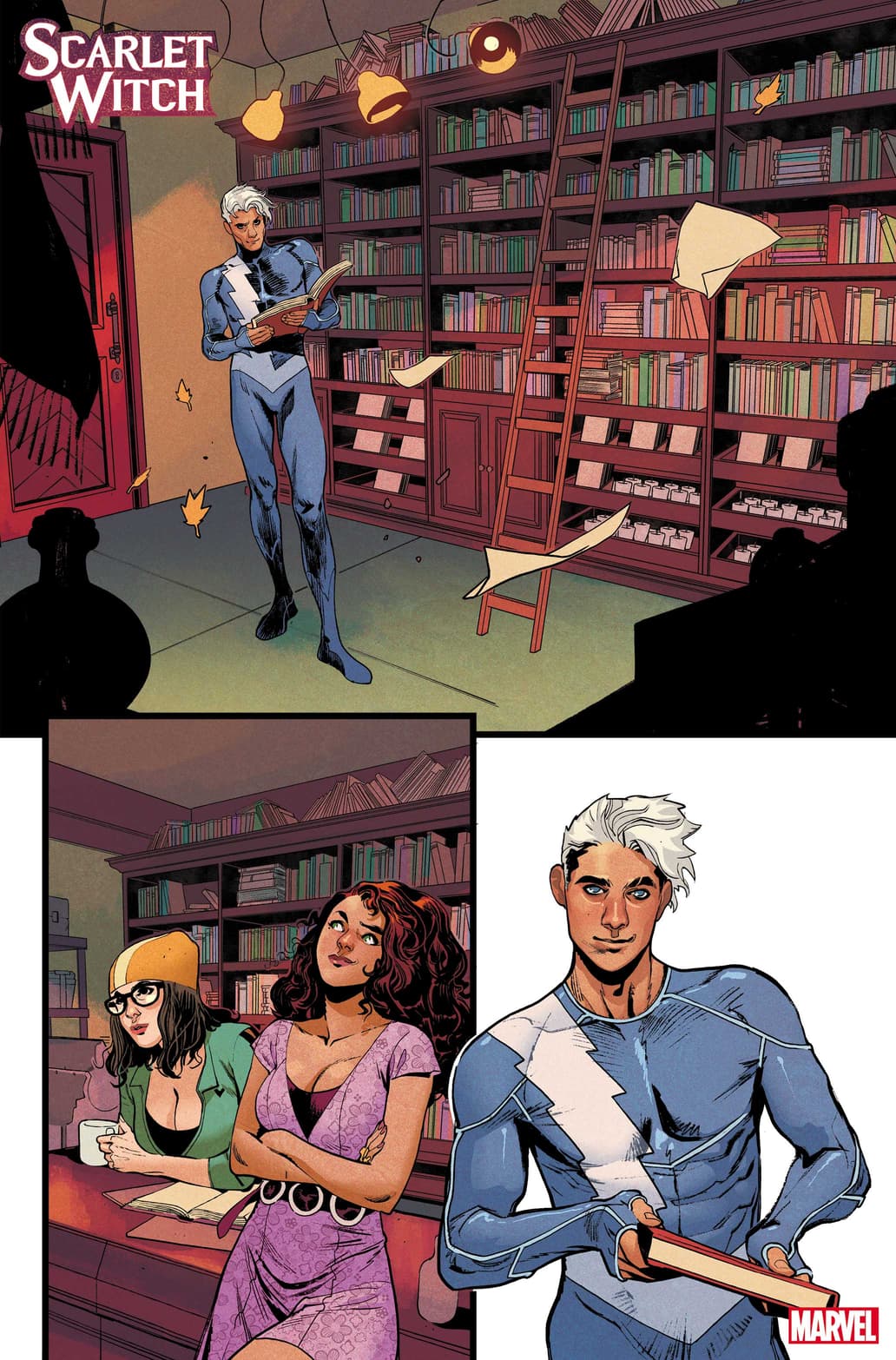 SO: At her core, Wanda is someone driven by love – love for her family, love for her friends, for people living out struggles like she’s live out. And most recently, at last, for herself as well. And there are few stronger motivations than that. Even a traditional human will run faster, fight harder, endure longer, when driven by love. So for a godlike being like Wanda, there’s almost nothing she wouldn’t do to protect the world, and the people, she loves. I think that’s why she’s remained an icon. Even if her battles and experiences are cosmic on the surface, she’s fighting them for a reason that’s incredibly relatable. The scale may vary, as might the enemies, but we all know what it is to defend what we love, to fight for what we love. Wanda’s a multiversal powerhouse that’s fighting for something that will always hit home.

SO: New enemies! New locations! And a family rebuilding itself, piece by piece! We know Viv has shown up, we’ve seen Polaris is coming along with Pietro. Wanda’s strengthening the bonds of chosen family that she’s long held light in her grasp. Now, the circle is tightening – and with it, Wanda is strengthening even more. As the series continues, so too will this. And along the way? We’ll visit places Wanda’s never gone – and put her in a fight unlike any she’s been in before. Wanda will face a queen in her own right, one driven by an honor and duty that might be even stronger than Wanda’s love for this world. Wanda might just have to put her fists up for this one – but that’s nothing new, she’s been fighting and winning for herself since the day she was born.

In the meantime, check out the official trailer for Scarlet Witch #1: