The concept of the multiverse is an idea that has long been a hallmark of many comic book yarns throughout the years, and nowhere is the idea of parallel Earths being handled with as much pathos, action, and humor as in AHOY! Comics’ The Wrong Earth, written by Tom Peyer and illustrated by Jamal Igle. In The Wrong Earth, Dragonflyman and the Dragonfly, alternate versions of the same hero from Earth-Alpha and Earth-Omega, inexplicably switch worlds. While Dragonflyman is cut from the mold of the old-fashioned heroes of yesteryear, his counterpart The Dragonfly is a darker, grimmer crimefighter, and that will impact how they navigate the new worlds in which they find themselves.

Mr. Peyer and Mr. Igle looked back at their first volume of The Wrong Earth—available in trade paperback on May 14th—and the creative revelations they have had while working on the series, and tease what we can expect in the further adventures of Dragonflyman and the Dragonfly. 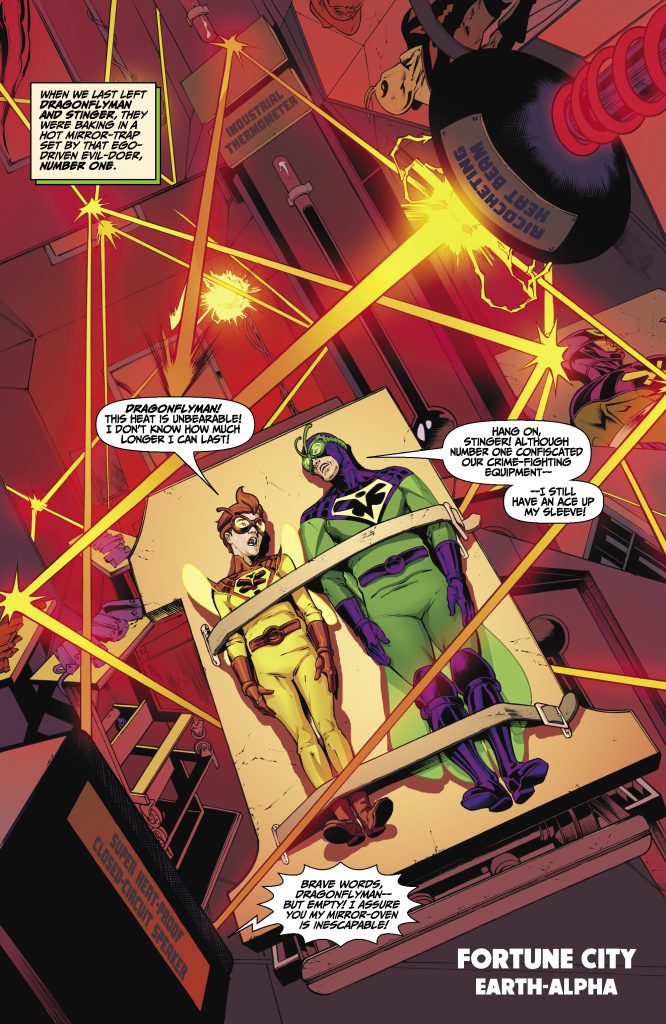 FreakSugar: For folks who may be new to the series, what can you tell us about the conceit of The Wrong Earth?

Tom Peyer: Two versions of the same masked crime-fighter—Dragonflyman, an old-fashioned, upstanding Boy Scout of a hero; The Dragonfly, a modern, ultraviolent vigilante—become trapped in each other’s worlds.

Jamal Igle: One man, two heroes. One is a tireless champion of justice and virtue who tries to do the right thing with a smile and a gleam in his eye. The other, tired and grim, he dispenses justice with the least amount of concern for the ramifications. Unfortunately, they wind up on a world that’s familiar to them but so different in so many ways.

TP: The campy hero has to make his way through this depressing milieu without being defeated by it; the gritty hero has to put up with all of these unserious people. They each find it difficult to operate in a place where even the good guys don’t share their values. 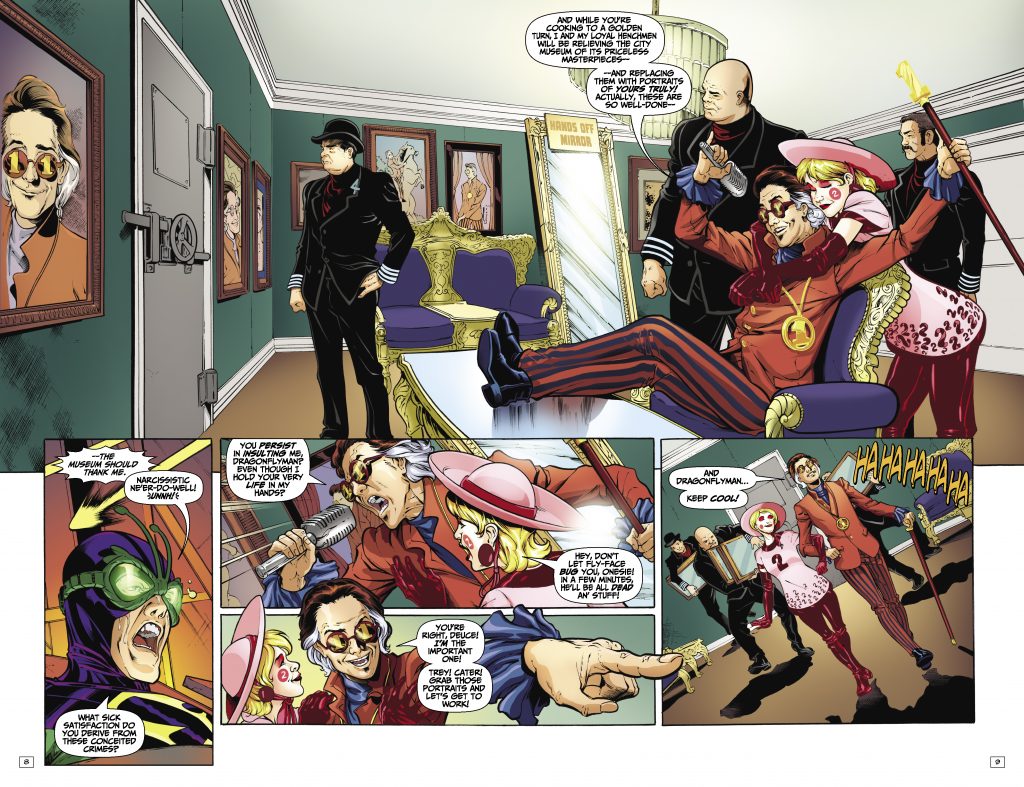 FS: As the first story arc progressed, is there anything that surprised you about how the characters developed?

TP: Yes! I outline and plan and think ahead, but I usually get my best ideas when I’m in the weeds with the characters, writing dialog and scene descriptions. I was in the middle of writing a scene when it hit me how the Dragonfly’s junior assistant had died, and that affected the whole rest of the story.

FS: You really play with readers’ expectations of comics and readers’ knowledge of comic tropes and story arcs. What was your biggest joy in exploring those nooks and crannies?

JI: It’s a journey into comics history for me. It’s taking the best elements of the Silver Age and the Modern age of comics characters and creating a mash up. It’s like Pat Boone doing covers of heavy metal songs, or Metallica covering Ennio Morricone’s “Ecstasy of Gold.”

Some of my favorite bits are some of the side characters like Duece and Triviac. It’s also about exploring how different, but how eerily similar Dragonfly and Dragonflyman are. Even though they’re essentially the same person, my approach for each became about their enthusiasm and energy. What drives them, what motivates them were things I tried to carry over into their body language and how they fight. Dragonfly is about martial arts efficiency, Dragonflyman throws haymakers like he learned how to fight watching John Wayne movies. It’s always about those little touches for me. It also carried over to how I approached the storytelling and page layouts for the series, jumping back and forth between a more “traditional” approach and the “letterbox” style of comics that became popular with the Marvel Ultimate Universe of the mid 2000’s.

TP: I wasn’t quite prepared for how fully Jamal would be able to differentiate the architecture, hardware, and clothing, and characters of both earths. The man is gifted, he takes the stories seriously, and he works tremendously hard. And you can see it, it’s all right there. You always know which Earth you’re on, and it’s always entertaining to look at. 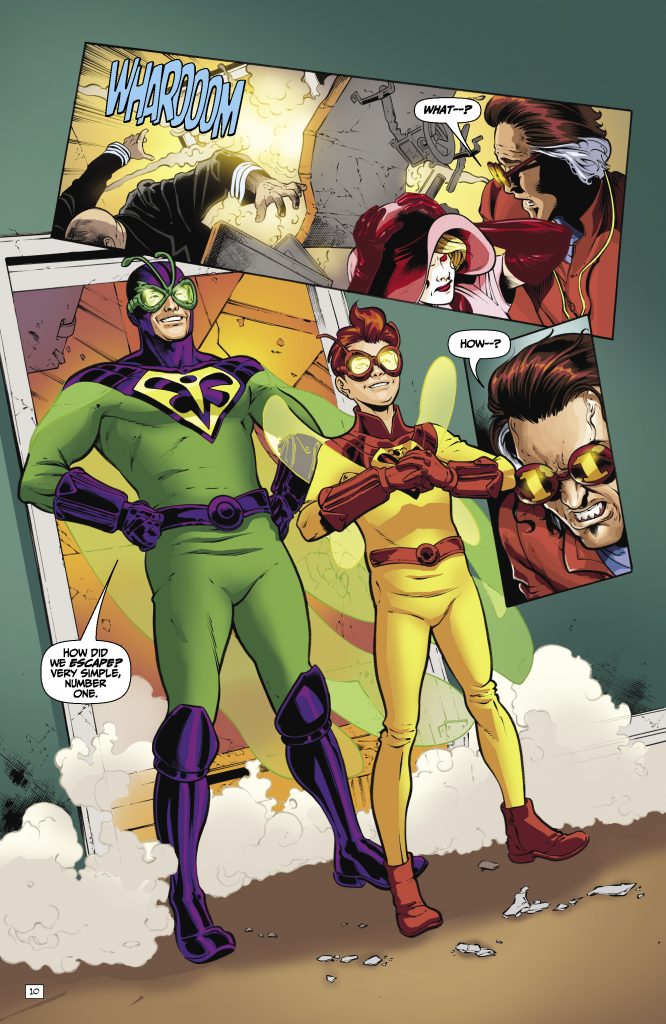 FS: The character designs in The Wrong Earth are magnificent. What was the process for creating the looks of the characters and locales of the book? Where do you draw inspiration?

JI: it really began with talking to Tom and sharing our love of comics, old movies and TV shows. He really laid the ground world for Earths Alpha and Omega. After that it was about how to dress the worlds. With Earth Alpha, I decided I wanted to populate it with all of these concept vehicles and equipment that was never mass produced. It’s The Man from U.N.C.L.E. , Rollerball, Matt Helm kind of world. In terms of the clothing, it’s anything from Mod dresses and Nehru jackets to bell bottoms and vinyl hot pants.

With Earth Omega, it was easier because it’s our world, but darker. I didn’t want to emulate anything really gothic, per se. It’s more about pushing the dirt and the grime. It plays into how the cops are handled, how both versions of Number One were created. Number One Omega is based on a few different characters like Gary Oldman in True Romance and Alan Cumming in Cabaret. Then there are out heroes, where Dragonfly was heavily influenced by Japanese anime like Moldiver and Ninja Team Gatchaman. Dragonflyman is definitely a callback to traditional golden and silver age superhero characters like Spysmasher and the original Blue Beetle. 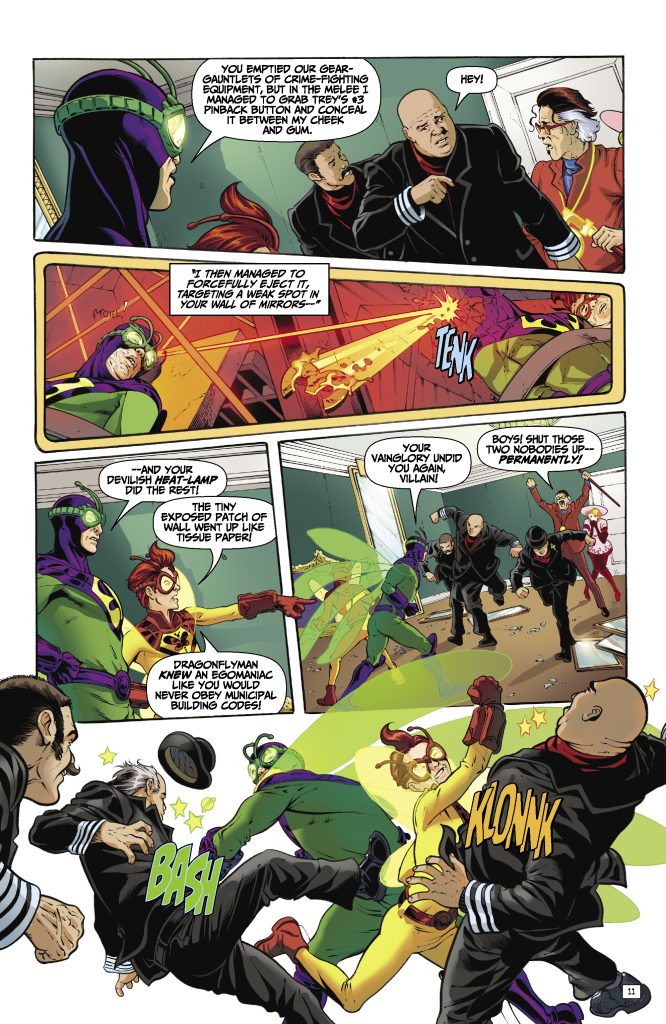 FS: You recently had a Free Comic Book Day issue of Dragonfly & Dragonflyman. What can you tell us about the story and how it relates to their story as a whole?

TP: It takes place in the fairly recent past, when both heroes are still operating at full strength on their own worlds. In particular, it contrasts their very different relationships with the police. Artist Russ Braun did a tremendous job of picking up what Jamal accomplished and running with it on his own.

JI: It’s more of a primer, you get a really good handle on who everyone is, including the original Stinger Omega. It was fun to see Russ Braun tackle my characters. One of the joys of this has been seeing different artists like Gray Erskine and Frank Cammuso handle the boys.

FS: Can you tease what we can expect in the next arc of The Wrong Earth?

JI: Earth Zeta, the shining city on the hill, where absolutely nothing is what it seems. It’s gonna be a ride.

TP: Wouldn’t it be wild if Dragonfly and Dragonflyman met face to face? I’m not saying it’ll happen necessarily, but wouldn’t it be something?

From the official paperback description: