Social media and the rapidity of technological innovation is something of a mixed bag. While we’re becoming more connected than ever before, the tradeoff is a certain lack of privacy that is ever increasing. Where is the tipping point for individuals and for society as a whole?

Writer Jacob Semahn and artist Jorge Corona address those questions in their upcoming Image Comics series No. 1 with a Bullet, debuting this November. In No. 1 with a Bullet, Nash Huang, personal assistant to a variety show host, finds her life jeopardizes directly because of social media and technological strides in sharing our lives.

Mr. Semahn and Mr. Corona recently about the ideas behind No. 1 with a Bullet, how technology can encroach on our personal lives, and what to expect moving forward. 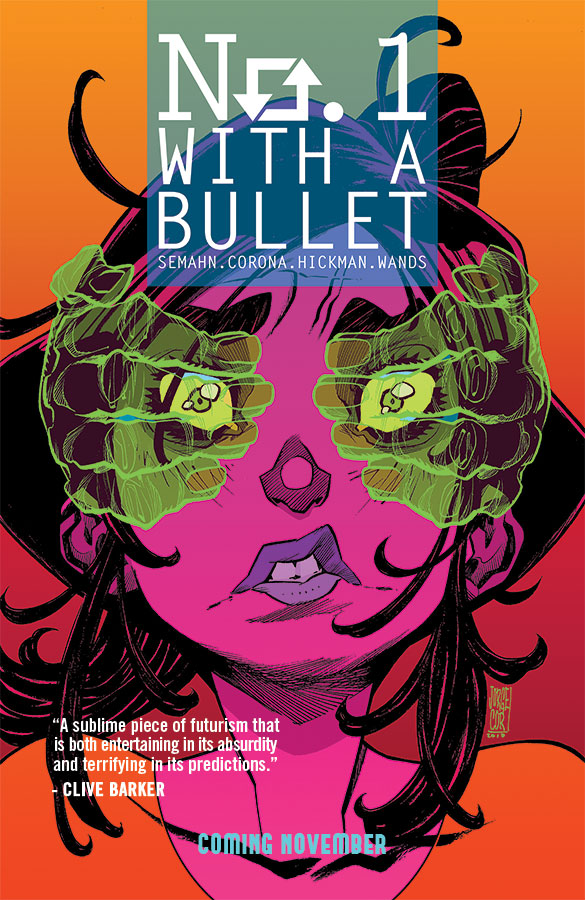 FreakSugar: For folks who are considering picking up the book, what can you tell us about the conceit of No. 1 with a Bullet?

Jacob Semahn: The world of No. 1 with a Bullet is not far from where we currently are. In this near future look, contacts can do many things… including record footage. Privacy slowly becomes a thing of the past with such innovations. The sad fact is that this is not so much a flight of fancy, but a matter of “when?”

FS: What can you tell us about Nash, the protagonist of the first issue?

JS: Nash Huang is a self-assured twenty-something with a healthy social media presence and solid private life. As the personal assistant of variety show host, Jad Davies, Nash is roped into doing the occasional on-air segment. Being celebrity-adjacent, she lives that lifestyle of the finer things while also being able to walk down the street relatively incognito. We’re catching Nash at that time in her life when everything clicks into place… the job, taking the next big step with her girlfriend, and confident that the future is bright. ‘Course, that all goes to shit in twenty-two pages. 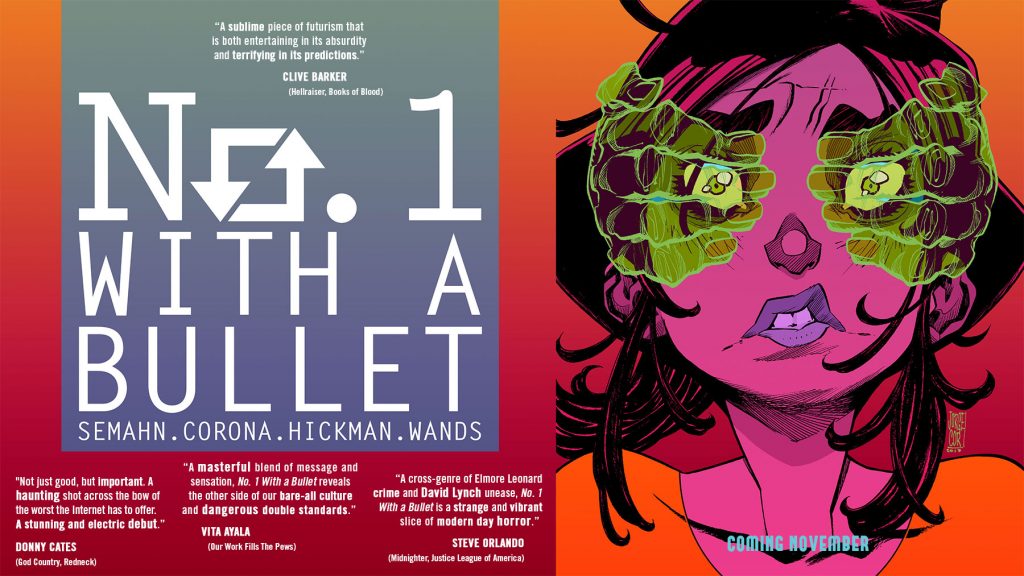 FS: The Iris Shutter firmware upgrade that we see in the first issue is alternately creepy and feels like it might not be a far-fetched possibility. What can you tell us about it?

JS: The Iris Shutter is a contact lens that was created to record and play video. In the first issue we see a test drive of the newest upgrade to its firmware… that of augmented reality. In reality, we are going through an age of virtual worlds and experiences, whether through Oculus Rifts or Pokemon, Go! People have been rabid for that next leap in video game technology. It seemed apt that a contact with the power to play video would make an excellent augmented reality device.

FS: Following up on that, technology plays a huge role in No. 1 with a Bullet. What kind of research went into crafting the tale?

JS: I wish none. Then I could sleep better at night. I had the bones of a stalker story in the back of my head for a few years now, but after reading about contacts that can record footage being patented and this year’s election—and the hand that social media played in all of it—then I knew that the research was over and the story was ready. 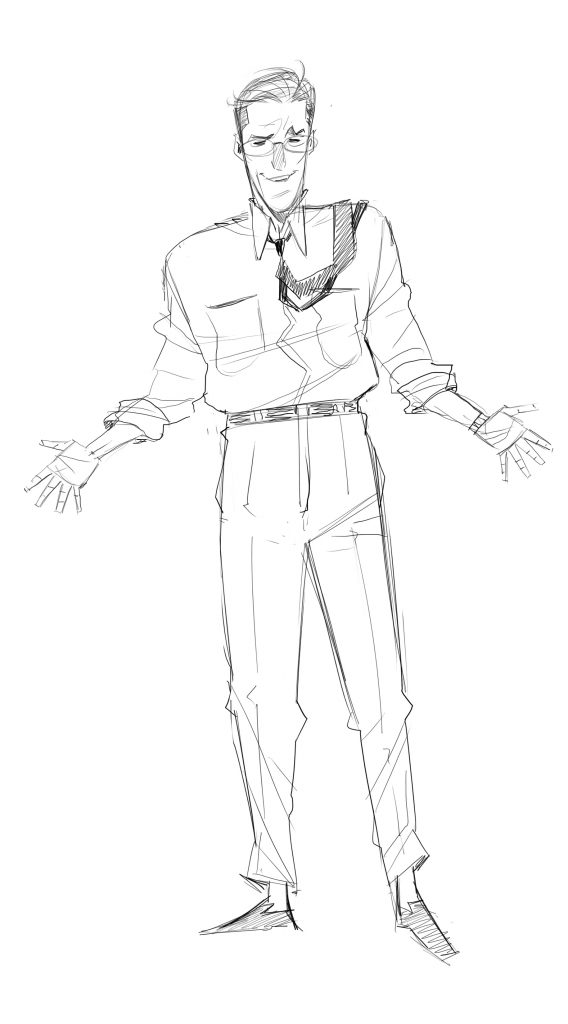 FS: Jorge, one of the things I loved about the first issue is that it’s so kinetic, which matches the high-speed at which information about ourselves is disseminated. Was that a deliberate choice? What is the collaboration process like between you and Jacob?

Jorge Corona: The pace in which Nash’s life crumbles after the introduction of her Number One Fan definitely was the main reason the art style feels like a sketch, full of rapid strokes and constant movement. Honestly my main concern was to bring every emotion the characters go through across. Technology is an important aspect of the story, but it does come down to what it is actually doing to society and the way we treat each other in this new world.

Since working on our last comic, Goners, Jake and I are now able to work more freely in how we each tackle our sides of the storytelling. Instead of a script with defined panel layouts, Jake gave me action descriptions of scenes and the characters so I could pace the page layout. This allowed us both to concentrate on how to tell Nash’s story in a more compelling way.

FS: Following up on that Jorge, how you depicted things like how we use social media and the Firmware were done very sharply, showing those things succinctly without getting bogged down in unnecessary details. It has a streamlined yet with a momentous feel. How did you decide how to show those things in the issue?

JC: Technology needed to be an involving aspect of the story, but I did not want for them to become the central focus point for the reader. Characters needed to be surrounded by it while not overpowering the emotional tones of the plot.

FS: The first issue deals with issues of privacy and how innovation can encroach on that. We see this all the time, and not just in how we use social media. So much of what we do is co-opted by companies such as Amazon and Google toward collating and quantifying our lives to sell us products. We know this, but still engage—and sometimes it’s a tradeoff. Convenience for privacy. What do you think about our real-world interaction with the technology?

JS: I think it’s a dangerous and slippery slope. We’ve willingly turned our lives into a commodity. History has proven that it never turns out well. If you can recall that scene from Minority Report where Tom Cruise walks through a mall and it scans his retina to sell him personalized ads… That’s our future. Personalized bubbles of information catered to you and only you. No outside influences or ideas… just the same belief—the same mantra—fed to you over and over. It will be great for sales, but will create a furthering rift in society. We’ve already started to see it with Facebook and Google ads.

FS: Something that you did in the first issue that was incredibly smart is to set it in the world of talk show journalism, which, in many ways, has DNA tied with what we do now with social media. It’s just another layer of how we share what we do and how we do it. Was that something you had in mind when creating the story?

JS: We got to that conclusion eventually, but it first started with not wanting to do another stalker story where it’s this famous celebrity being attacked. Jorge and I talked about it being a social media blogger, but it wasn’t good enough. It needed to be a tad bigger. That’s when we landed on the variety show of it all. It’s a stage everyone is familiar with, but few are die-hard fans of.

FS: Given Nash’s job and the world in which she works, how does she feel about the Internet and social media?

JS: She feels like I’m sure we all do about it. It’s woefully depressing and sad, but addictive and oddly self-aggrandizing seeing those numbers rise… seeing all the people that liked your words or photos. They’re called “Followers” for a reason, right?

FS: Following up on that, without giving anything away, it looks like her views might change a bit after some of the events of this issue. Is that a fair assessment?

JS: Oh… yes. That is a fair assessment.

FS: Is there anything you can tease about what we can expect moving forward?

JS: Thrills and chills. Questioning reality… and some people die. It’s rather disturbing.

No. 1 with a Bullet, written by Jacob Semahn with Jorge Corona on art, goes on sale November  1st from Image Comics.

Her social media, strong. Her variety show segments, a hit. Nash Huang is at the top of her game. But when the iRis Shutter contact lens hits the market, Nash’s life is personally invaded. The latest leap forward in “technological progress,” these contacts not only play video or augment reality…but also record footage. Fighting to keep her life together after a leaked sex tape goes viral, a clingy super-fan is the last thing on Nash’s mind…but that’s exactly when the bodies pile up and the terror begins. From the bestselling team that brought you GONERS, comes NO. 1 WITH A BULLET!

And check out the official trailer to the comic!