The first two Batman/Teenage Mutant Ninja Turtles miniseries from DC Comics and IDW Publishing were incredibly fun, engaging stories for anyone who grew up loving the Dark Knight and the Heroes in a Half-Shell. With each volume, writer James Tynion IV and artist Freddie Williams II topped themselves, bringing all the action and craziness readers would want to see when the heroes collided, while providing captivating yarns with a ton of heart that could fill Dimension X.

This week, Tynion IV and Williams II are back with a third installment with Batman/Teenage Mutant Ninja Turtles III #1, and the two waste no time dropping fans in on the action. But instead of the familiar heroes and villains of the respective universes of the Caped Crusader and the Turtles, we’re treated to amalgams of our favorite characters.

How did this happen? How will their worlds become unblended? Mr. Tynion IV and Mr. Williams II spoke with us recently about the conceit of the miniseries, how this miniseries relates to their previous miniseries, how their working relationship has evolved over the years, and what we can expect to see in the story moving forward. 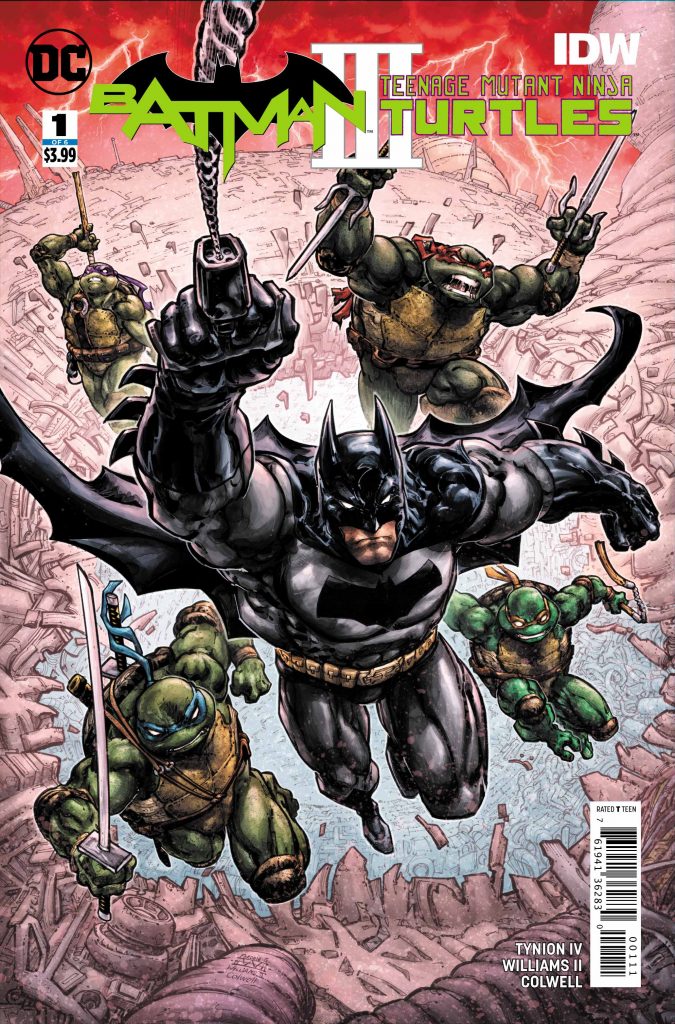 FreakSugar: For folks checking this out, what can you tell us about Batman/Teenage Mutant Ninja Turtles III #1?

James Tynion IV: It is legitimately one of the most lunatic things I have ever written, and coming from someone who still can’t believe they let us cross over Batman and the Teenage Mutant Ninja Turtles one time, let alone for three separate crossover events? That’s saying something! We start in the familiar streets of New Gotham City, where Batman, and his brothers Leonardo, Raphael, Donatello, and Michelangelo, and their faithful butler/mentor Splinter are about to foil the latest plot by the deadly Laughing Man and his SMILE CLAN! If you’re confused, that’s exactly the point. The mythologies of both Batman and the Teenage Mutant Ninja Turtles have been merged together into something truly bizarre, and now they’re going to need to set things right, with the help of a character NOBODY is expecting to show up in this crossover.

Freddie Williams II: James did a great job with the summary for issue 1, but I’d like to add that it’s such a fun thing to be involved in these combined universe designs, and in issue 1 you get to see them all, it’s like reveal after reveal, so it was a real blast to draw! 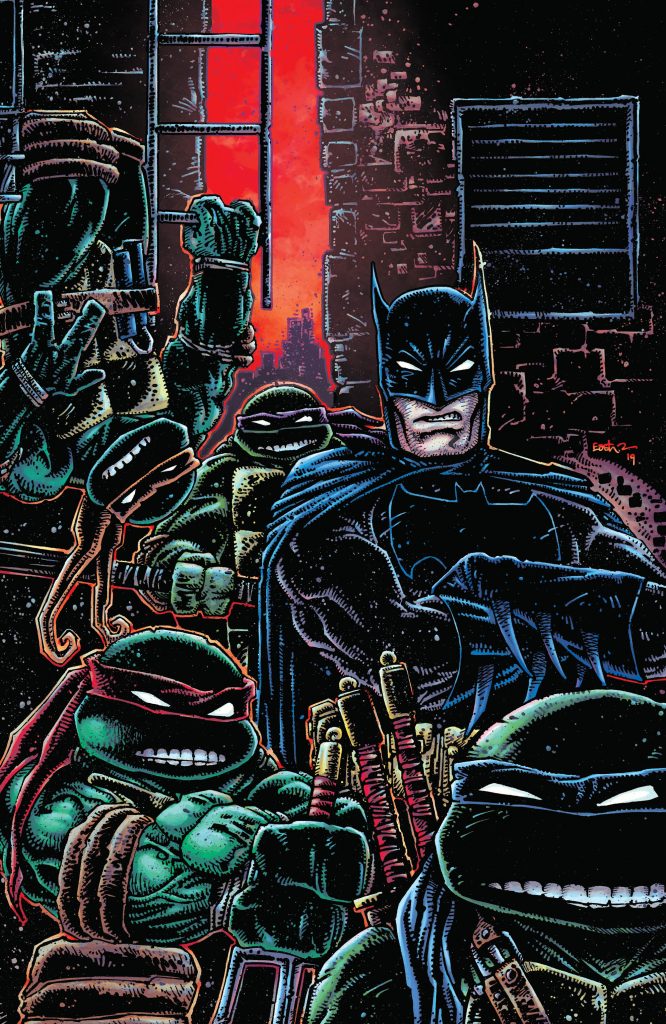 FS: How does this miniseries feed into the previous two?

JTIV: In a lot of ways this story stands on its own, aside from understanding that these characters and worlds have met before… But there’s actually a major connection between Volume Three and the first two… In the first crossover, we learned that Shredder, The Foot Clan, and the Turtles were in the midst of a major battle when the interdimensional threat, KRANG, beamed them to another universe. The DC Universe. How and why did Krang have the coordinates to the DC Universe? What has he been planning all this time, as we’ve seen these worlds go head to head over and over? We’re about to find that out as a part of the biggest craziest conclusion to this trilogy of Batman/Turtle crossovers that either of us could have ever cooked up.

FWII: A direct continuation- but one you have to unravel a bit, in a fun rollercoaster ride, but once you spiral out from it over the course of the first 2 issues, it makes clear how clearly connected all three volumes are! 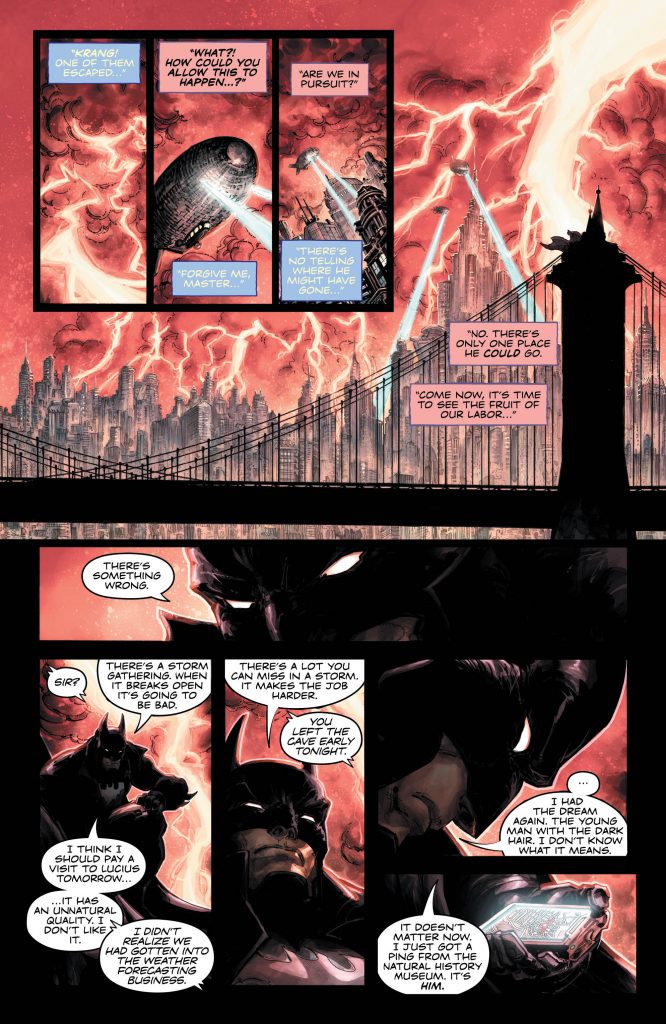 FS: How special does this book feel, landing on anniversary years for both Batman and the Turtles?

JTIV: It feels like serendipity, honestly. The core concept that started this whole thing isn’t new… It started with something really as simple as saying the sentence “The Anti-Monitor with Krang in his belly” for the first time, I think, in Summer 2016. But to do something of that scale, and also to bring in some of the top secret characters we’re bringing into this story… I think you need the power of the anniversary of at least ONE of the two franchises. Especially because this is a story that cuts down right to the heart of what makes both of these groups of characters the powerful forces of pop culture that they are.

FWII: Shockingly Serendipitous! 80 years of Batman and 35 years of the Ninja Turtles! WOW, I didn’t know it until James told me at San Diego Comicon of 2018, he mixed in that info, with all the cool and crazy story idea he had for volume III! 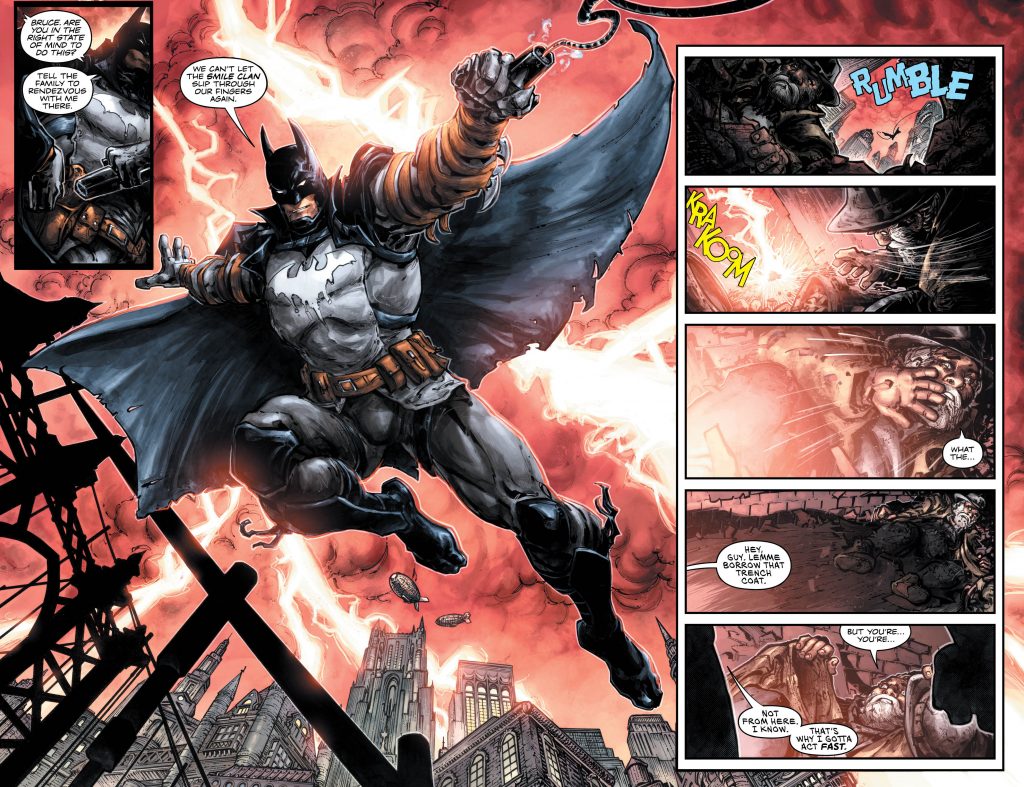 FS: You drop us right in the middle of the action, making readers get their bearings. Did you do that to add to the tension?

JTIV: Absolutely yes! Honestly, I have to give all the credit of that idea to the amazing Jim Chadwick, our editor extraordinaire on all three volumes of Batman/TMNT. I think the original outline of the series didn’t get us to the combined universe into the middle of the crossover, and I can’t believe I ever thought that was a good idea. Starting in media res, in the midst of this dynamic, strange new world is part of the power of this entire project. It starts us out in a really exciting point, and it only gets MORE exciting from there.

FWII: James is a genius writer, I think he did it for many reasons, tension being one of them. It’s just the best way his story could be told, and James is the best! 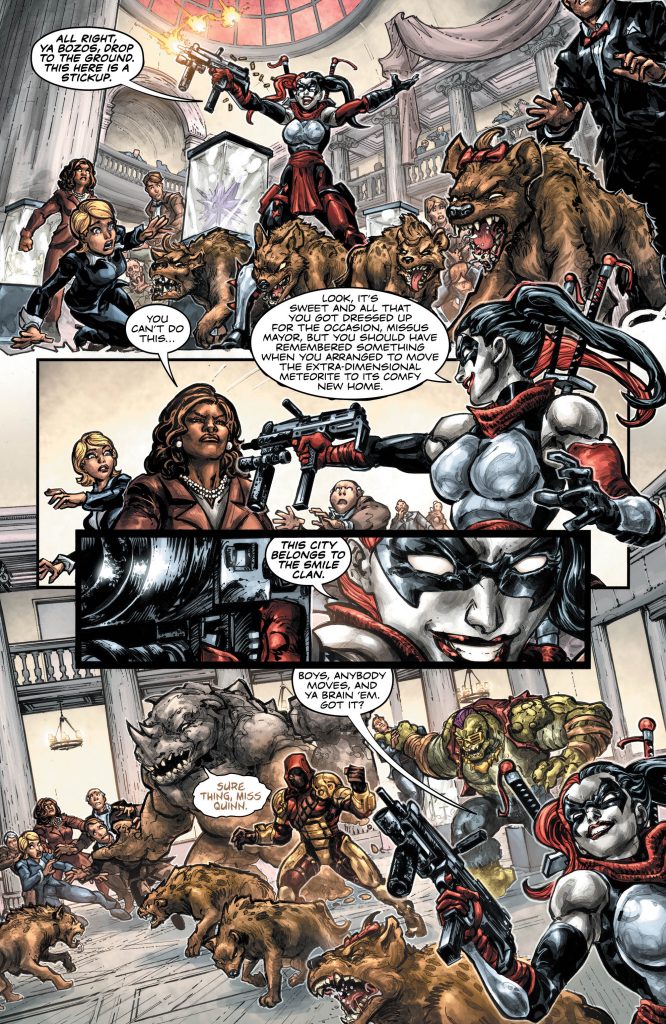 FS: There are so many interesting and cool amalgams of the respective universe’s character in the first issue. Do you have any favorites?

JTIV: I honestly LOVE The Laughing Man, this universe’s answer to both The Joker and Shredder, two of the most frightening villains in comic book history, and blended together, they are something truly deadly. Even more than the Laughing Man, I love the terrifying design Freddie gave The Smile Clan, which I legitimately wish I could just straight up lift and bring into the DC Universe because they look so freaking cool. And then there’s the Alfred/Splinter design. How can you NOT love a human-sized Rat in a tuxedo? Literally, how could you not love that?

FWII: The Leonardo/Nightwing is my favorite! Leo is my favorite Turtle, and his personality fits so well with Nightwing that it’s the perfect combination! OH, and my wife always gushes about how cute Krang as the Anti-Monitor is! She always does a cute little impression of Krang’s voice from the 80’s cartoon, and I love it, so he’s my favorite because of Kiki’s impression and fawning over his evil little grin! 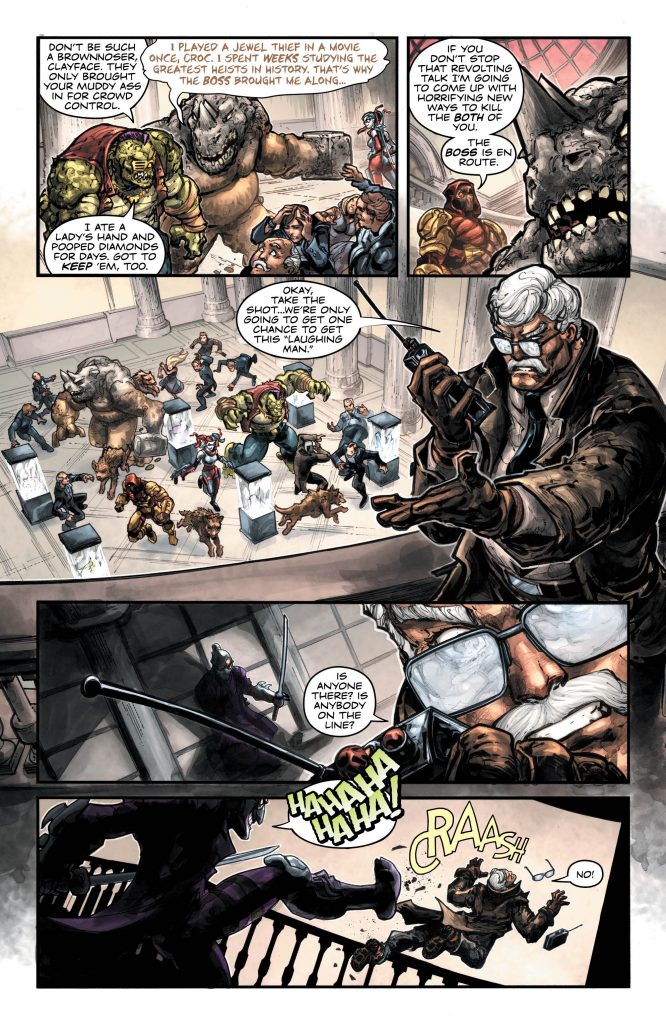 FS: You two have collaborated on so many phenomenal miniseries. Do you a shorthand with one another at this point?

JTIV: I’d like to think so! Every crossover has been a bit of a conversation between Freddie and I, and I’ve played with my scripting style in a bunch of different ways before landing where we are today. The entire second crossover was written plot style, which was a lot of fun, but honestly screwed me up on the backend when I was working on too many projects at once. Thankfully I was able to bring in the great Ryan Ferrier to help me land that plane… But we got started on this one with time enough to make sure every issue sings, and we’ve been thinking about this story, and talking to each other at conventions for months and years now, so really when it came time to sign on for this one it was a no-brainer.

FWII: James is a genius, and I look smarter by working with him – he makes all of this look so easy, and what I mean is in casual conversation he’ll pick up on little stuff I said or joked, and incorporate bits into the big master plan he has worked out, and he’s always open to me asking questions of suggestions- he just knows how to make it all work together! The biggest contribution I make in the storytelling is in the pacing or dynamics of the action scenes. James has a framework planned out, so as long as we’re sticking to that, he’s open to me doing all kinds of weird stuff with the action of visual pacing. Super collaborative and easy to work with! 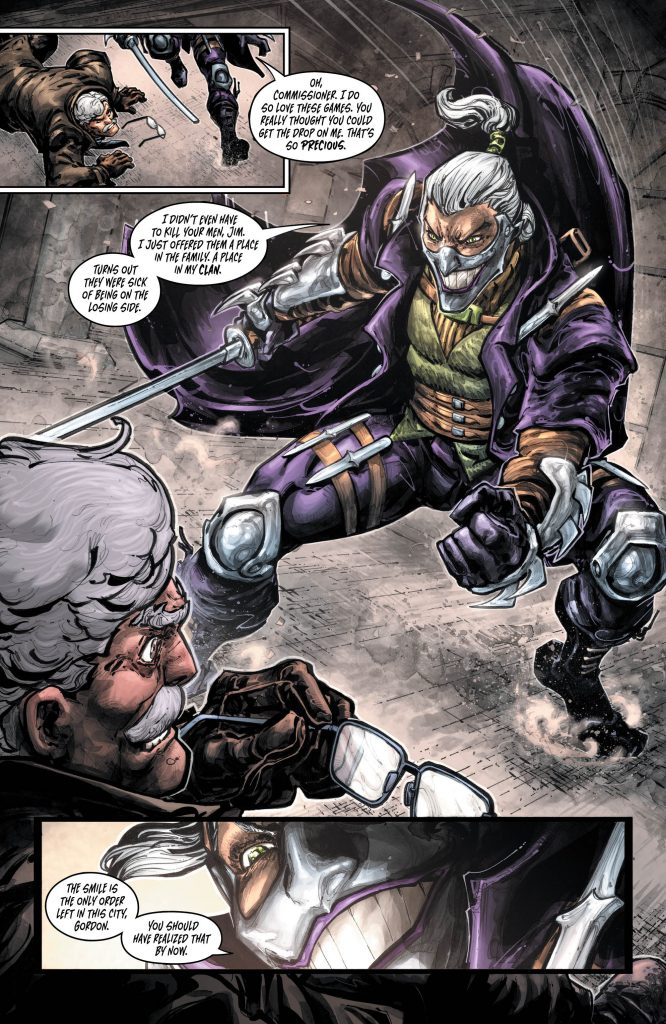 FS: Is there anything you can tease about what we can expect to see in the miniseries going forward

JTIV: Hoo boy… Well, there’s a twist coming in that first issue that we have NOT revealed to anyone who hasn’t read the issue. It has been solicited that Kevin Eastman is assisting on interior art in this crossover, but we have NOT revealed what he is drawing and how out of control insane this crossover is really going to get. There are pages Kevin drew in issue two that made me flat out cheer when I got them in my inbox. I still can’t believe we’re actually doing any of this. Somebody pinch me, seriously, because this HAS to be a dream.

FWII: Oh boy, there sure are! Character reveals and art reveals! James is right though, what a thrill to see Kevin Eastman’s contributions not his series, he’s an amazing artist and a fantastic person, working with him on the art is an honor, and I’m thankful to be apart of all of this!

The 80th anniversary of Batman collides with the 35th anniversary of the Teenage Mutant Ninja Turtles in this stunning concluding miniseries to the BATMAN/TEENAGE MUTANT NINJA TURTLES trilogy. Our heroes have battled the evil of the Foot Clan in Gotham City and Bane in New York, but now Krang has gotten his hands on the most dangerous technologies in the DC Universe—and no universe is safe from his wrath! Co-published with IDW.