What happened to pilot Amelia Earhart? The details after she vanished during her fabled flight remains a mystery and has been a source of speculation for years. Writer Jay Faerber and artist Sumeyye Kesgin use that mystery as a springboard for a beautifully rendered, gripping tale of fantasy and flight in their new Image Comics series Elsewhere. In Elsewhere, Amelia finds herself contending with a world of fantasy the likes of which she’s never seen and must reevaluate her role in the world and what she will do in the face of injustice.

Mr. Faerber and Ms. Kesgin spoke with us recently about the genesis of the series, where Amelia finds herself after she disappears, and why Ms. Earhart’s life and disappearance continue to keep us intrigued. 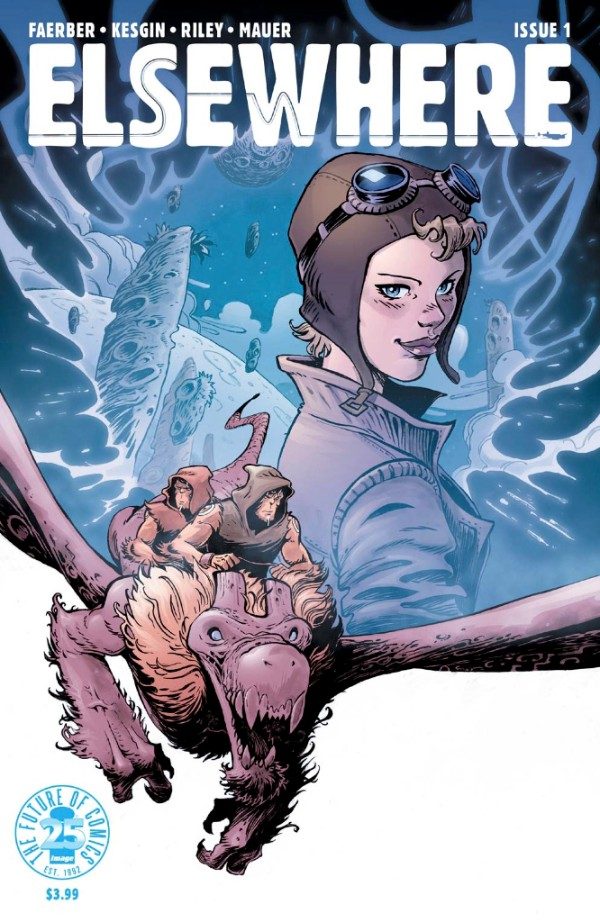 FreakSugar: First of all, thanks so much for agreeing to the interview!

Jay Faerber: We’re glad to do it — thanks!

Sumeyye Kesgin: We thank you.

FS: For folks who might be considering picking up the book, how would you describe the conceit of Elsewhere?

JF: Our book provides an answer to the question: “What really happened to Amelia Earhart?” And in our book, Amelia finds herself trapped in a strange fantasy realm filled with exotic beings and creatures.

SK: Also a fantasy story about being lost and trying to find a way back home, incorporating “real” missing people. 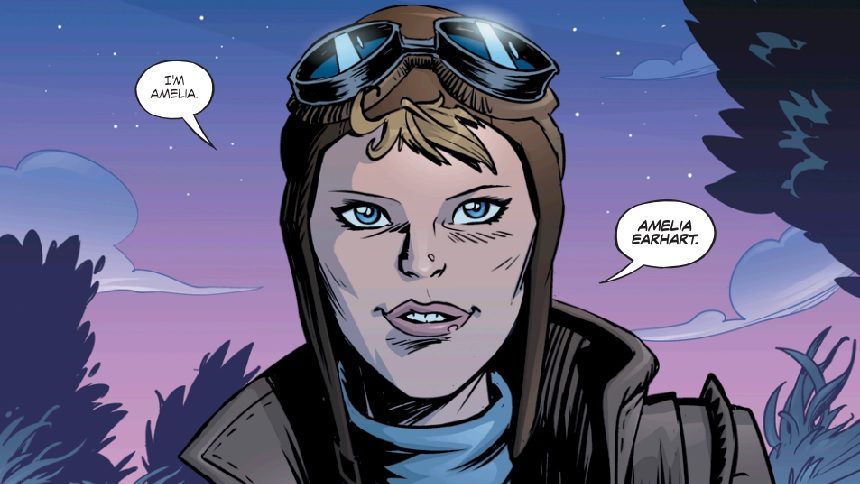 FS: How long has the idea of Elsewhere been gestating? How did it evolve from that initial concept to what we see now?

JF: It all came together pretty fast. Sumeyye and I were looking for a project to do together, and I wanted to tackle the fantasy genre. But I wanted to ground it with a relatable human protagonist. And then I hit on the idea of that protagonist being Amelia Earhart. And then we populated this world with Sumeyye’s amazing designs and visuals.

SK: I love fantasy genre and I have a huge respect to Jay as a writer. I was pretty excited when Jay offered to pitch a fantasy project to Image! And we started to work on it.

FS: Amelia is very much a fish out of water when we meet her in the new world of different fantasy-type people she meets. How would you describe her headspace when first we encounter her?

JF: She’s taking it in stride as best she can. The real Amelia Earhart was, by all accounts, a fearless, intrepid adventurer. There was no challenge she’d back down from. So while this strange new world is definitely jarring for her, she’s doing her best not to freak out. 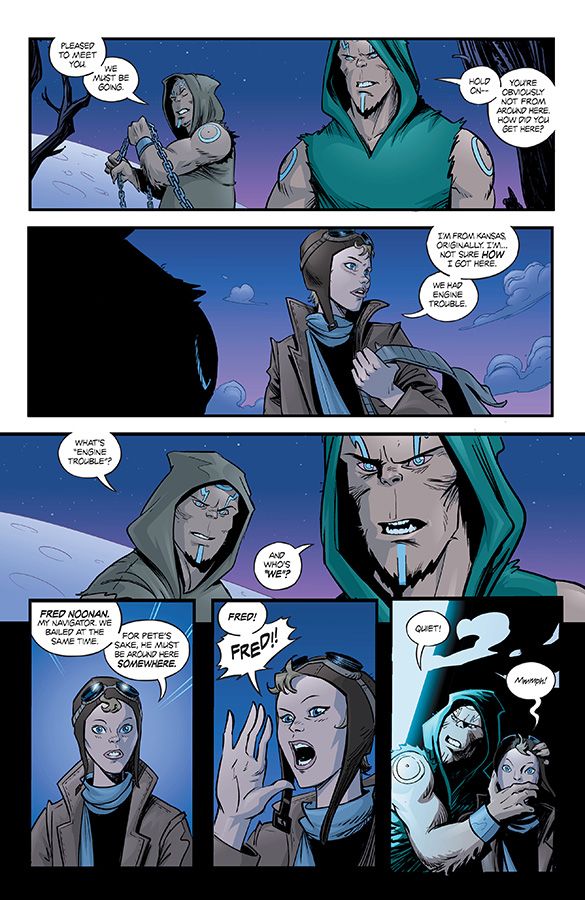 FS: Amelia Earhart has been in the news again recently, with photos that people are claiming to be her following her disappearance. What is it about Amelia that keeps drawing us in over and again?

JF: I think Amelia’s unique in that she’s both a real person and a larger-than-life figure. And to have this forward-looking, ahead-of-her-time adventurer disappear is tragic, but it’s also provocative — people can’t help but wonder what really happened.

FS: Following up on that, what kind of research went into creating the book, both in portraying the look and personality of Amelia?

JF: In terms of the writing, I did some research into Amelia’s past. But it wasn’t extensive, since we’re telling a fictional story. So I really only needed a snapshot of her personality to use as a jumping-off point.

SK: I only know her biography from web and I know how many amazing works she did. I have a huge respect for her and I always imagined her character as brave, naive, and a leader and tried to reflect my impressions to the pages. 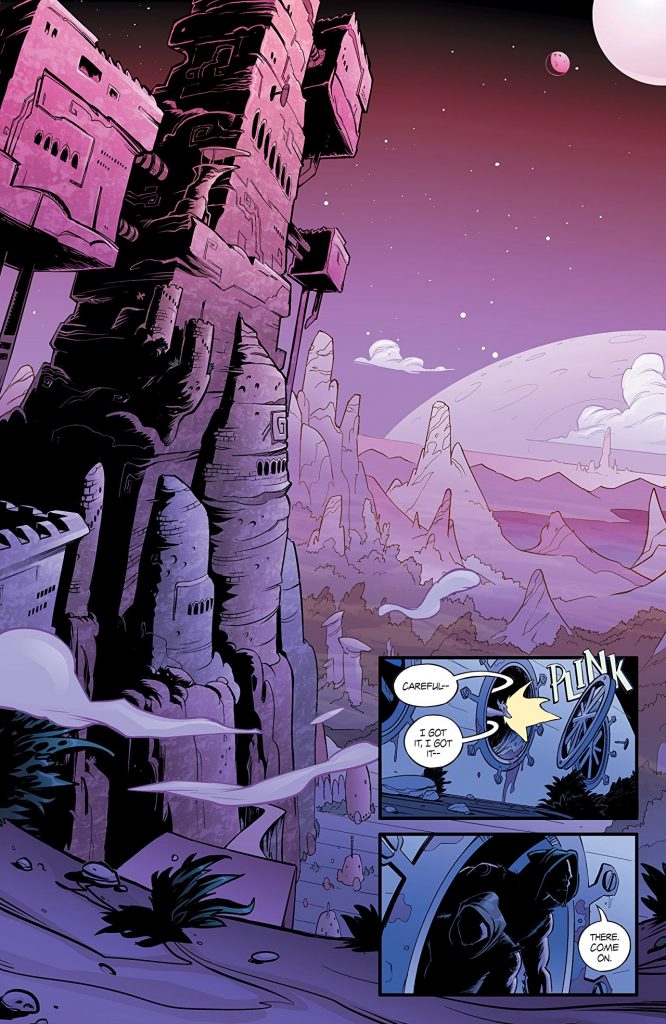 FS: The design of the book very much has an amalgam aesthetic of realism and fantasy. What was the process like of designing the world of Elsewhere? Are there any particular pieces of pop culture that influenced your approach to the book?

SK: I have favorite artists, movies, and books but for my first step I just thought: “where I might find myself if I got lost in a strange world.” My first designs of the characters and environments were too symbolic. I had to give the two alien races specific appearances that were in harmony with their personality and lifestyle (freedom and conservatism, ornaments and sharp cubic forms). My initial backgrounds were a little too strange, etc. I then tried to go in a more philosophic-looking direction, but then I changed them a little bit later, in the end we’re doing a book for readers’ entertainment and hope you guys like it.

FS: The book feels seamless in that there seems to be zero disconnect between how the writing interacts with the art and vice versa. What is your collaboration process like?

JF: It’s a pretty standard collaboration, in that I write a full script (with panel-by-panel descriptions and full dialog). This helps Sumeyye have a better grasp of the characters’ emotions in every panel. I think we’re fortunate in that we work very well together. Sumeyye brings his story to life wonderfully — the world wouldn’t be nearly as rich without her stunning visuals.

SK: Yes, I like to show characters’ moods in panels, so Jay’s writing helps me a lot. Jay has an illustrators’ eye, too. His panel descriptions are very skillful as a storyteller and he never makes things difficult for me. 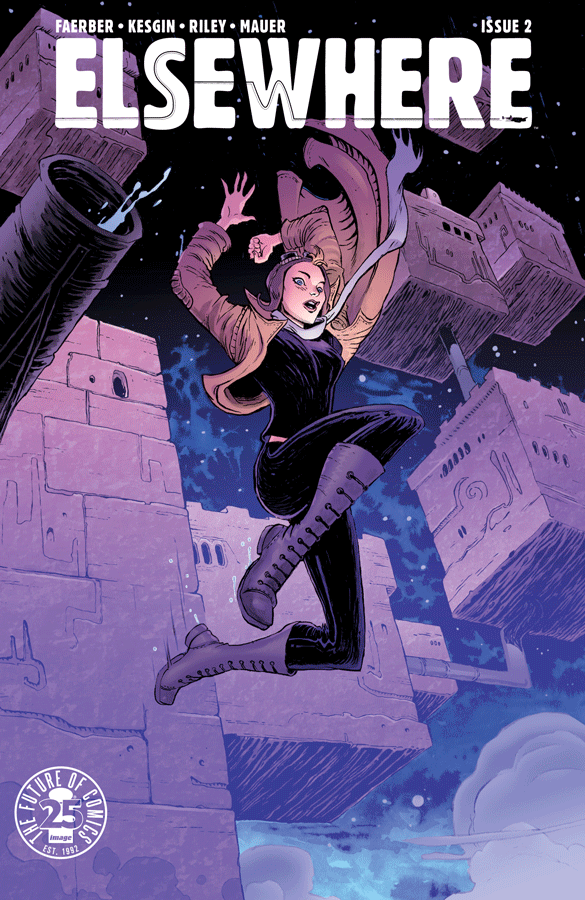 FS: Without revealing too much about the end of issue 1, Amelia meets another famous person who seemingly disappeared without a trace. Will we see more vanished folk in Elsewhere and does both Amelia and that person’s appearance give any clues as to where they are and why?

JF: I don’t want to say too much, but the surprise appearance at the end of issue #1 does seem to suggest Amelia’s not the “item” from Earth that found its way to the strange place called Korvath. But that’s all I can say about that.

FS: What can readers expect from the series moving forward?

JF: Readers can expect the unexpected!

Elsewhere #1, written by Jay Faerber with Sumeyye Kesgin on art, is on sale now from Image Comics. Issue #2 goes on sale next Wednesday, September 6th.