You gotta hand it to Jean Grey, the telekinetic and telepathic mutant member of the X-Men: Whenever she happens to be alive after one of her scores of deaths (or her future or past self is hanging around) and apocalytic happenings are abounding, she somehow manages to insert herself right in the middle of the madness. If the new poster for the “Civil War II” crossover that Marvel just released is any indication, it appears that Jean is going to possibly have a fiery hand in the superhero melee that will pit comrades against one another. 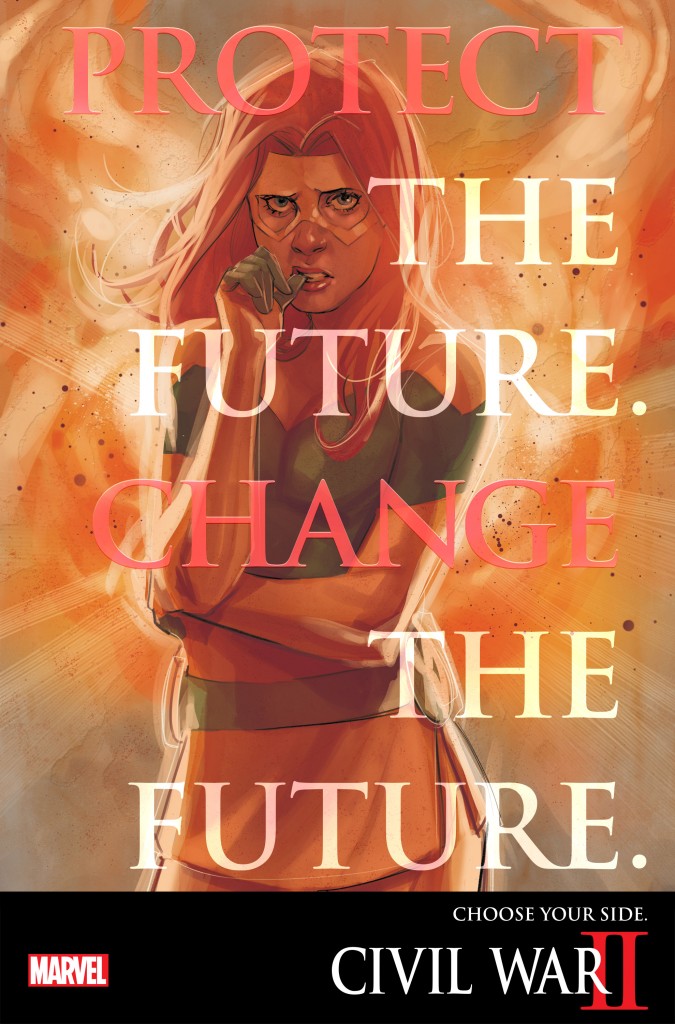 Which side will Jean Grey choose?

The most significant thing to note about the poster is the tell-tale Phoenix raptor behind Ms. Grey. While the Jean Grey shown is a younger Jean pulled from the past to the present by the X-Man Beast, her adult self has been a host to the sometimes-destructive cosmic Phoenix force on more than one occasion (until her most recent death, that is). Will young Jean be following in her future self’s footsteps?

Also, what is the status of the Phoenix, anyway? At the end of the Avengers vs. X-Men crossover, Hope Summers and the Scarlet Witch declared “No more Phoenix” and “wished away” the cosmic entity. Later, however, Cyclops is seen becoming the Phoenix in the recently completed Secret Wars event, but was destroyed by a powerful Doctor Doom. After reality was sorta-kinda rewritten at the series’ end, did the Phoenix make it back through somehow? The poster seems to indicate yes, but, as always, this could be a feint by Marvel. I guess we will have to wait until issue 0 of Civil War II hits in May.

From the official Marvel press release:

The Marvel Universe is at a crossroads. A new power has emerged, one that can predict the future—for good or ill— and the heroes of the Marvel Universe are faced with a choice: Wield the power of “predictive justice” to change the future as they see fit, or reject it and allow tomorrow to unfold unaltered.

With Jean’s existence wrapped so much up in time travel and changing the time stream already, on which side will she fall in the superhero civil war?