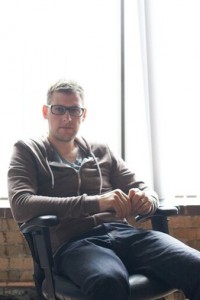 Robots and questions of efficacy, agency, and liberty have long been issues that science fiction writers have tackled, using those questions to reflect on ourselves and our need to define life and personhood. Writer Jeff Lemire carries on that tradition with his Image Comics book Descender, now entering its second story arc. Mr. Lemire was kind enough to take the time to speak with me about the genesis of the series, what we can expect from the upcoming storyline, and his influences on the feel of the book.

FreakSugar: It’s wonderful to get the chance to speak with you. Thank you so much. I spoke with series artist Dustin Nguyen in March, but for folks who aren’t familiar with the book, how would you describe Descender?

Jeff Lemire: Descender is a sprawling science fiction comic that follows TIM-21, a young robot on the run in a galaxy where all robots are hunted and destroyed. He may hold the key to the universe’s salvation, or its damnation in his unique machine DNA.

FS: Science fiction is a genre in comics that I feel hasn’t had the kind of hey-day it had decades earlier in a very long time and it seems to be having a new renaissance. That’s not necessarily a question, but just an appreciation for what you’re doing on the book.

JL: There is certainly a huge rush of sci-fi comics right now. I think the success of [writer Brian K. Vaughan and artist Fiona Staples’] Saga inspired many to venture to the stars.

FS: Now that Descender is transitioning into its second arc, what will the themes and thrust of that story be?

JL: Arc number two is called MACHINE MOON, and the title itself is a bit of a hint. We will see the hidden home world of the HARDWIRE, the robot resistance. More specifically, TIM-21, Telsa, Quon and the gang will be brought there.  But not all of TIM’s companions will make it that far.

And on top of that we will introduce a MAJOR new character. One I am very excited about. One with links to TIM-21’s past and one who will change the course of the series completely.

FS: When I was trying to describe Descender to some friends to pick it up, I told them that it shared a lot of the same DNA as Star Wars in that it felt like a tale of high adventure that was vast in its depth and breadth. The book feels like a marriage of old sci-fi with a 21st century sensibility. Is that a fair assessment? What were your thoughts as you were creating the worlds of Descender?

JL: I think that’s a fair comparison. It is certainly a big high-adventure space tale. Dustin and I tried to create a huge cosmic back-drop full of many different worlds and many different species and then tell very character driven, intimate stories within that canvas.

TIM-21 is the main character, but like in Star Wars with Luke Skywalker, it is really an ensemble cast. We have Bandit, Driller, Telsa, Quon. A pretty rich and colorful cast.

FS: Along those same lines, what would you say your biggest sci-fi influences are and how have they shaped how you approach Descender?

JL: My biggest influence on tone and fell was Stanley Kubrick and 2001. I was also deeply inspired by the world-building of Dan Simmons’ Hyperion series.

Beyond that influences on Descender are a bit scattered. I was really into Urasawa’s Manga, Pluto last year, which is a modern retelling of the classic Astro Boy story. So that was definitely on my mind. And I was also really into Jack Kirby’s 2001 comics from the 70’s, which featured the robotic character Machine Man. So these things were definitely floating around in my head.

FS: What’s the collaborative process like with Dustin? What kind of back-and-forth do you two have?

JL: I started writing Descender with Dustin in mind. I love his work and he and I, from our first conversations, were clearly on the same page in terms of design, aesthetics and visual storytelling. So I was pretty hands off after that. Though, I was writing to his specific style and his strengths.  Working with Dustin is effortless. We talk so little about the book. I write stuff, he loves it. He draws stuff, I love it. It’s not much more complicated than that. An ideal relationship built on mutual respect and two creators who have very similar storytelling priorities.

FS: When I spoke to Dustin back in March, I mentioned how I appreciated the very lived-in quality that the worlds of Descender have. Was that a conscious decision on your parts? Again, it reminds me very much in the vein of Star Wars, Heavy Metal, even Dune.

JL: I think the watercolor art that Dustin does gives the book a very organic look. It creates a really interesting tension on the page, drawing tech and sci-fi with this more organic style. And we are telling a story in a universe that has seen great devastation, so it all works very well together.

FS: You have a new book, Plutona, coming out next month. What can you say about that?

JL: Plutona is a five-issue series written by me and drawn by the talented Emi Lenox. It tells the story of five kids who find the body of the world’s greatest superhero, Plutona, in the woods after school one day.

The book isn’t so much about the superhero as it is the kids who find her. It’s about how this discovery, and the decision they make, starts to effect their lives and their friendship. It’s a very grounded story told from these kids’ point of view. Super heroes exist sin this world, but they usually only see them from a distance. They are as real to these kids as sports stars or movie actors are to us. Now, not only confronted with a super hero, but with a dead one, these kids lives will change forever.

FS: Back to Descender, one thing I appreciate about the book is how you show the ramifications of the characters’ choices and personalities, and how they both inform and color the story. That’s a good mirror for life, especially something we begin to realize as we get older. I think it’s interesting to see how Tim acts as a good portal for the reader to view how that’s happened.

JL: TIM is programmed to adapt to those around him. He has been very sheltered until now, so it will be interesting to see how these other characters, and their flaws, influence him.

FS: Also, big congratulations for Descender getting picked up by Sony! What was that like to get that sort of news before the book even hit stands?

JL: It’s exciting for sure, but Dustin and I remain very much focused on the comic. We want to make the best comic book we can, we’ll leave the movies for Hollywood.

FS: You’ve said you have a definitive ending for Descender already mapped out and that you have a rough issue count of 24 issues in mind for the length of the series. How much, if any, does the ending change as you beginning writing the meat of story? Even if the ending becomes what you set out to be, do you look at characters and are surprised how they evolved versus how you intended in the beginning?

JL: The ending is pretty much the same as it’s always been, it’s the middle that expands. The more I immerse myself in the world of Descender, the more different characters start to take on a life of their own and demand more time on the page. Characters that were only supposed to appear in one scene suddenly develop storylines all their own that work themselves back into the bigger narrative. This organic growth is what I love about the monthly comic format. It allows you time and space to grow and explore a story over many issues and many years.

The first story arc of Descender, TIN STARS, will hit stores in paperback on September 24th.