At the first of the year, DC Comics announced that it would be rolling out several new series based on classic Hanna-Barbera characters such as Scooby Doo and The Flintstones. One of those books, Future Quest, will take a different bent than the other books in that stable, focusing on a story that will unite several characters from various Hanna-Barbera cartoons. Jonny Quest, the Herculoids, the Impossibles, Frankenstein Jr., Space Ghost, Birdman, and a whole gaggle of characters are coming together to combat a threat no one person could stop alone.

I recently spoke with series writer Jeff Parker and artist Evan “Doc” Shaner about how they became involved with Future Quest, how they approached making all of the characters fit together, and handling the properties with the fun and respect they deserve.

FreakSugar: I’m a huge fan of Jonny Quest and Space Ghost and all of those Hanna-Barbera characters. Was Future Quest a project that you lobbied for or was it presented to you?

Jeff Parker: I think there’s a magic trick where we just radiate stuff we like and people come to us. At least that’s what I like to think.

What I think is that Dan DiDio approached [artist and writer] Darwyn Cooke when he realized he could bring back a lot of the Hanna-Barbera characters. I believe his first impulse was to go to Darwyn Cooke, which is the right impulse. Darwyn’s first impulse was to go to me and Doc about it, which is amazing. I’m so glad that he thought of us first.

So initially, I got to bounce story ideas off of Darwyn and then we had to sit around and wait for approvals for a bit. It’s a big company and there are a lot of channels to go through. And Darwyn had a lot of stuff to do so he had to move on, which was sad for us. However, he gave us the “touch,” which was a nice thing. 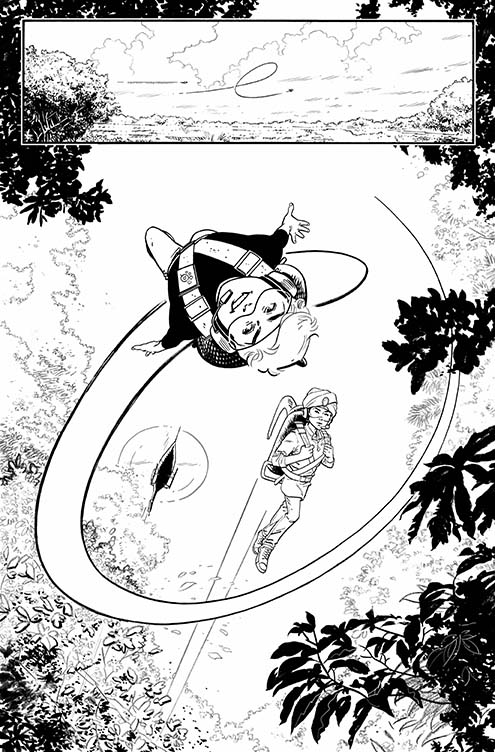 FS: Were there any characters you were itching to tackle?

JP: It was kind of perfect. Doc, I think you were very solidly a Space Ghost guy and I was solidly a Jonny Quest fan, so I think that sort of covers it. [laughs]

JP: And they’re the foundations of the whole thing. 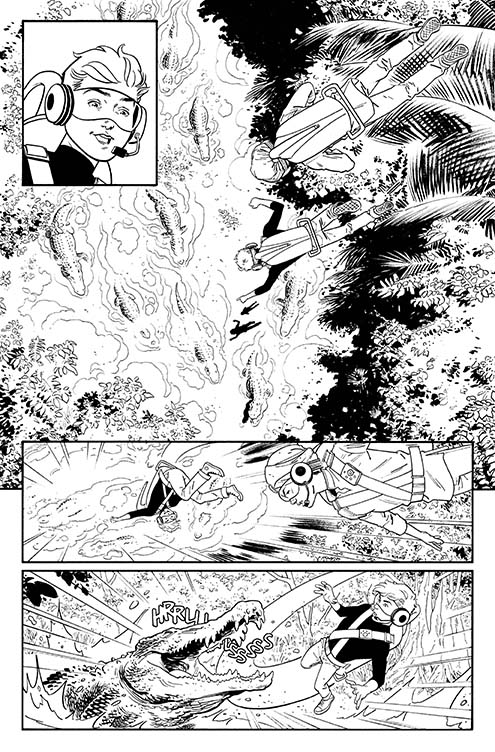 FS: In recent years, there have been a lot of pastiches and homages to characters like Space Ghost and Jonny Quest on Cartoon Network’s Adult Swim: Space Ghost Coast-to-Coast and The Venture Bros. spring immediately to mind. Are you two playing this story straight or straight mixed with humor like the older cartoons had?

EDS: I don’t think we’re playing it tongue-in-cheek. I hesitate to say we’re playing it completely straight, but we probably are. That’s the way we’re treating it. We’re treating with respect to the original incarnations. Not to speak against stuff from the 1990s—although I like it—but the tone of it doesn’t show up in our book.

JP: There’s certainly light bits and there’s humor, but none of it is at the expense of the characters. It’s just simply there in the sense in that we think an adventure story should have some laughs, too.

I never get that sort of thing where someone has some kind of classic character and spends their time making fun of it. What’s the point of doing it? One of the things I love—which we did with Captain Marvel and Flash Gordon—is taking something you don’t think you’re going to take seriously and make you get invested in it. That’s what I want to do with a project like this. I want you to think, “I don’t care about the Herculoids or Frankenstein Jr.” and go away thinking, “All I care about is Frankenstein Jr.” [laughs]

We keep bringing up Birdman. We both surprised ourselves by putting things on Birdman that we weren’t expecting and getting into his character. That one would have been the hardest one because [Adult Swim’s] Harvey Birdman: Attorney-at-Law looms in everyone’s mirror. But no, it’s all about Birdman and his bird sidekick and it all makes sense.

It’s about striking the right tone. If you get the right tone, you can tell any story. And the tone had to be just right for all these characters to come together, including characters who were on the wacky end, like the Impossibles. 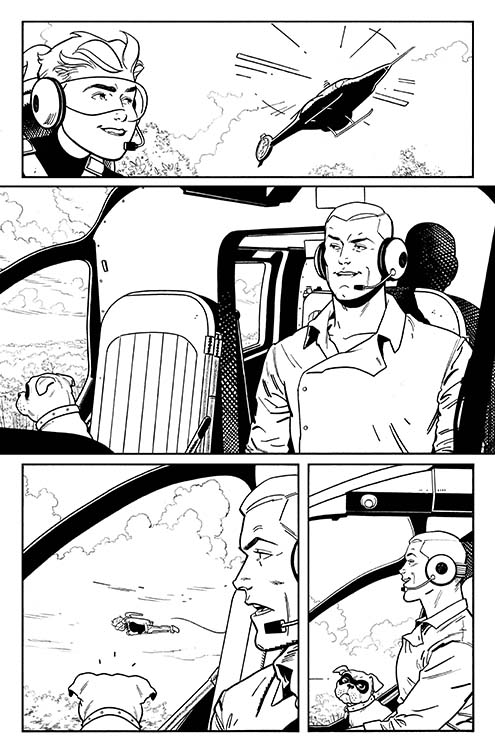 FS: To that end, was it difficult to fit all of these characters into a story that made sense? Birdman and Space Ghost seem to mesh together, but was it tough bringing in characters like the Herculoids or the Impossibles?

JP: The Herculoids fit right in. It was the Impossibles that were the trickiest. I felt bad for Shaner because he had to figure out their looks really fast to create an initial promo image. The ideal thing is to digest a project and then do the art, but he had to do it right away. They look more realistic, but they aren’t buff. They can’t take on Space Ghost. But they work in the universe and make sense when you see them. I still don’t know how you did that, Doc. 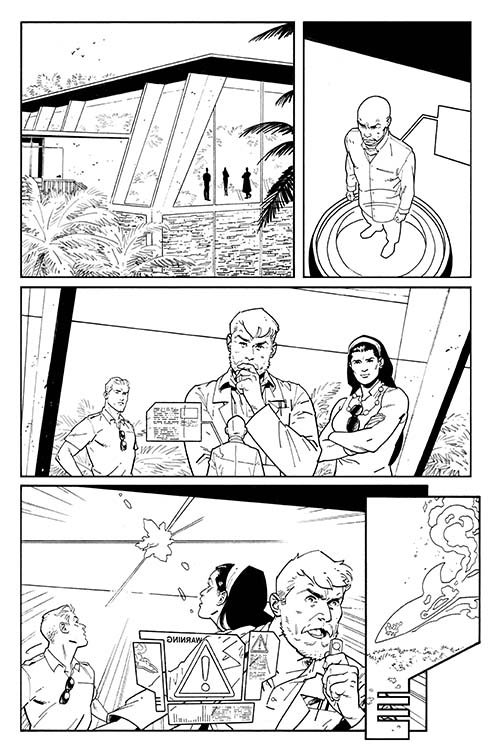 FS: Doc, how did you approach making those characters fit?

EDS: Like Jeff said, some characters were trickier than others, the Impossibles definitely been the toughest. Space Ghost and Jonny and Birdman were in my wheelhouse already. Some characters I had to swerve into my wheelhouse, like the Impossibles and Frankenstein Jr.; not just to fit my sensibility, but to serve the story, since the story is seen through the lens of Jonny Quest.

At the same time, some of the most fun I had was taking those characters and not making them too realistic so that when they show up, you recognized them. I knew that Coil-Man still had to be the shortest of the group and kind of round with a blocky nose. The question is how far you go with that. The same with Multi-Man: He can be tall, he can be lanky. It’s just a matter of finding a way to do that.

JP: My favorite is when you had to figure out Frankenstein Jr. One of the initial things with that promo image is showing how it could go. He’s kind of this big Gigantor/Iron Giant sort of character. And then the little button nose made the character! [laughs]

EDS: And that’s it, finding the detail that makes the character live and for Frankenstein Jr. it was that button nose. [laughs]

JP: He’s got to have a button nose. And he has to have a mask, even though he couldn’t possibly be concealing an identity—he’s the other 100 foot robot! This one has a mask, it’s definitely not him! [laughs] 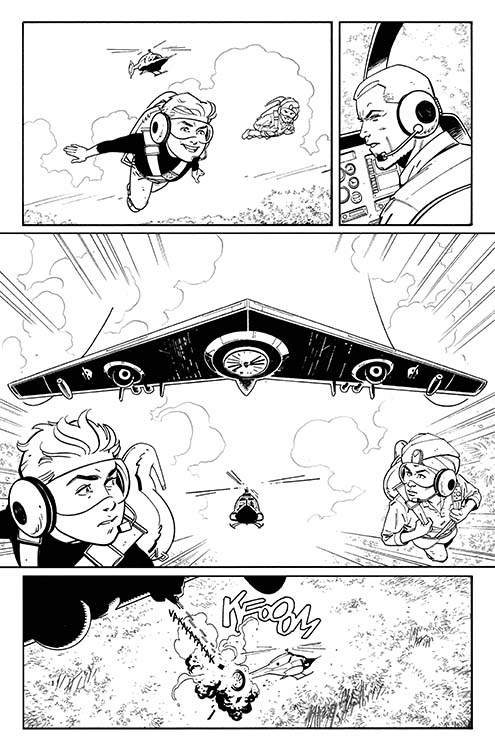 FS: What’s your elevator pitch for the book? I know part of it is, “Hell yeah, they’re all together!”

JP: Actually, I don’t think I can improve on that? Can I use that? “Hell yeah, they’re all together!” [laughs]

FS: Do you have other arcs planned beyond the initial arc?

JP: It’s all one big miniseries. It’s not quite a maxiseries. Recently, DC just did us a solid and let us put in what we call Vortex special issues that show the individual characters and takes place before the main story. It’s great because we get to tell some backstory of the characters and you get to read the ongoing story through the lens of what it is.

Jonny Quest is a kid who’s locked in the world of espionage and global adventure. He and his adopted brother Hadji are protected by a Secret Service agent. Their dad is the greatest scientist in the world and everyone wants a piece of him because he’s continually deciding the future of the planet. So they get mixed in with a lot of stuff.

Our story focuses on a threat that was stopped by Space Ghost on the other side of the galaxy. It’s come to Earth and will unite two solar systems with all kinds of colorful characters including giant robots, flying cavemen—everything you can possibly think of gets thrown at this. It’s got monsters and the Herculoids. It’s everything that got me into comics. It’s about big ideas and big adventure.

Future Quest #1, written by Jeff Parker with Evan “Doc” Shaner on art, is on sale Wednesday, May 18th, from DC Comics.

When the adventurous and inquisitive Jonny Quest and his adoptive brother Hadji make a startling discovery in the swamplands of Florida, they are pulled into an epic struggle between the Space Rangers and a dangerous villain who threatens the galaxy. Now it’s up to the combined forces of Team Quest, Inter-Nation Security, Space Ghost, and a host of Hanna-Barbera’s greatest action heroes to stop him and save their universe!

Don’t miss the start of this new, monthly series that features character designs by comics superstar Darwyn Cooke and kicks off with an extra-sized story and a wraparound cover!