While IDW’s Jem and the Holograms series may have ended this summer, the rockers and their musical rivals, the Misfits, are currently gallivanting around in another dimension in the in-progress “Infinite” storyline. However, the conclusion to the “Infinite” won’t be the end of the Jem universe of comics, as IDW just announced during the San Diego Comic-Con that a new anthology, Jem and the Holograms: Dimensions, will hit stores this fall. 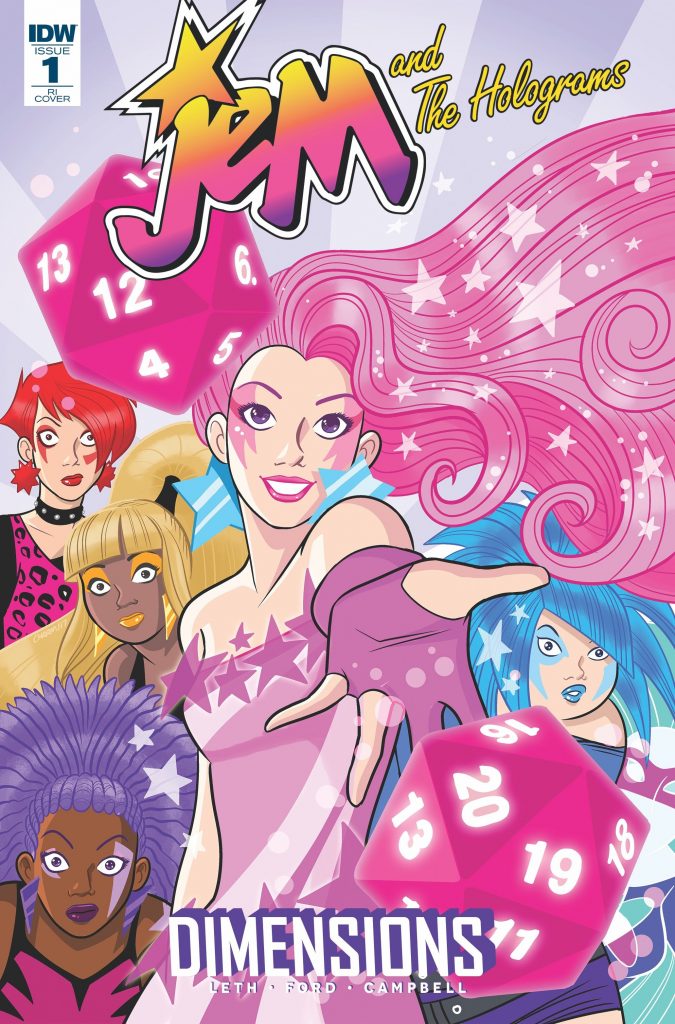 Dimensions will featuring a rotating team of creators to put their mark on Jem‘s world, with two stories appearing per issue. The November inaugural issue is particularly exciting, as it’ll feature a story written and drawn by original Jem artist Sophie Campbell, who’ll throw the spotlight on the Misfits! Artist Tana Ford and writer Kate Leth are also popping in issue 1 with a role-playing themed yarn that will let Synergy get in on the dice-rolling fun. And, according to editor Sarah Gaydos, longtime Jem writer Kelly Thompson will eventually show up with her own story for the anthology.

[Note: If you haven’t checked out Leth’s work on Spell on Wheels and Ford’s work on Silk, you’re missing out. They’re sure to bring that same energy and skill to Jem.]

As huge Jem fans here at FreakSugar, it’s gratifying to see that IDW hasn’t closed the book on our truly outrageous band members. It’s such an ebullient universe IDW has crafted, always brimming with positive messages, so, if you haven’t already, check out the trade paperbacks and get caught up on the fun.

Jem and the Holograms: Dimensions #1 hits newsstands in November from IDW.

Hasbro’s Jem and the Holograms may be currently out touring with the “Infinite” crossover mini-series, but they’re already plotting their next move with the just-announced Jemand the Holograms: Dimensions.

This new series, from IDW Publishing, will be an anthology comic set in Jem’s world, and will bring in a rotating roster of talent into the mix, as well as some Jem mainstays, to tell new adventures, with two self-contained stories per issue.

The debut issue sees writer Kate Leth (Patsy Walker, A.K.A. Hellcat!) and artist Tana Ford(Silk) jamming on a Dungeons and Dragonsgame night where Jerrica plays the role of Dungeon Master and even Synergy joins the fun! Just as exciting, Sophie Campbellreturns to the world of Jem, writing and illustrating a story about the Misfits on a ski trip gone south when Pizzazz’s cat is on the loose!

Sarah Gaydos, IDW Group Editor says, “Sophie, along with series regular writer Kelly Thompson, took the classic Jem and the Holograms concept, and reimagined it for a new generation of Jem fans. Now, with Dimensions, the floodgates have been opened for creators new to Jem to come play in Kelly and Sophie’s arena for an all-star jam session.”

Jem fans can rest assured that Thompson won’t be going far, though, and can anticipate her return to the series before you can say “Showtime, Synergy!”