You can’t read Jen and Tyler Bartel’s Crystal Fighters and not smile—it’s physically impossible. From mixing the gorgeous art that Jen always brings to the table to the story that the two have crafted, Crystal Fighters will pull new readers into the story and compel them to revisit the tale again and again.

That compulsion is much like what Stella, the comics’ protagonist, feels about the eponymous virtual reality game that’s at the center of the Bartels’ yarn. However, while most people are drawn to the pink and purple confections of the VR world of Crystal Fighters, Stella finds herself drawn to the hidden fight club within the game, a band of competitors she found by chance. However, accident or no, Stella finds herself ensorcelled with thoughts of the game and proving herself in the virtual arena.

Originally published on the digital platform Stela, Dark Horse Comics is collecting the individual issues of the series into one paperback and one complete tale. Jen and Tyler Bartel spoke with me about the conceit of Crystal Fighters, the influences that helped shape how they approach the story, deciding on the look of the book, and the space that the comic fills in manga, comics, and anime. 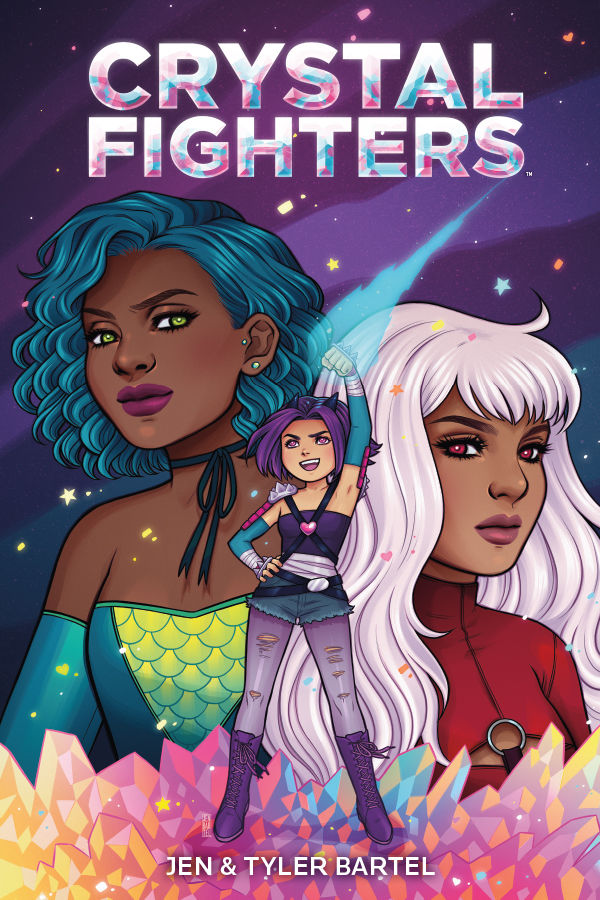 FreakSugar: For folks considering picking up the book, what is the concept of Crystal Fighters?

FS: The idea behind Crystal Fighters pulls from different comic traditions and genres. What was the genesis behind the book? How long had the idea been gestating?

JTB: Jim Gibbons, the original editor on the book, approached us with an opportunity to create a story formatted for a digital comics platform. Before that, neither one of us really had any significant amount of experience making comics, so we pulled a lot of inspiration from our own childhoods and what we grew up loving—namely properties like Sailor Moon, Dragon Ball, and early-2000’s MMORPGs. The idea evolved naturally out of these sources of inspiration.

FS: Following up on that, what I love about the comic is that it really seems to fill a space that needed filled in manga, comics, and anime. Was that part of the driving force behind the book?

JTB: We definitely set out to create a synthesis of our favorite elements of manga, anime, and western media—American audiences have been super familiar with big Nintendo properties like Zelda and Pokemon, that lean more into an anime aesthetic, and we wanted to bring some of that to a wider comic audience as well.

FS: Turning to the characters, what can you tell us about Stella, our through-character in Crystal Fighters?

JTB: Stella is an energetic and strong-willed 13 year old girl who’s struggling with the fact that her parents still view her as a kid. She doesn’t identify strongly with the games marketed at her, and is searching for something with the same maturity level that she has.

FS: You capture the teens’ voices incredibly well. Is there a process you go through to get those voices right—because you do an amazing job with it? I say that because not once did it feel stilted or like you were trying too hard. It felt quite natural to the ears.

JTB: Thank you! That’s all Tyler. He’s a natural when it comes to writing dialogue! We had a lot of discussions early on about making sure they didn’t sound too “try-hard” or like an adult was trying to write “youth language”, and I think such a big part of that is just thinking of teenagers as regular people rather than as some strange alien civilization. [laughs] So many teenagers are really active online and they’re extremely well spoken, insightful, and just, scary smart—we always wanted to show Stella and her friends in a really authentic way, and to us that just meant making them sound like real people. 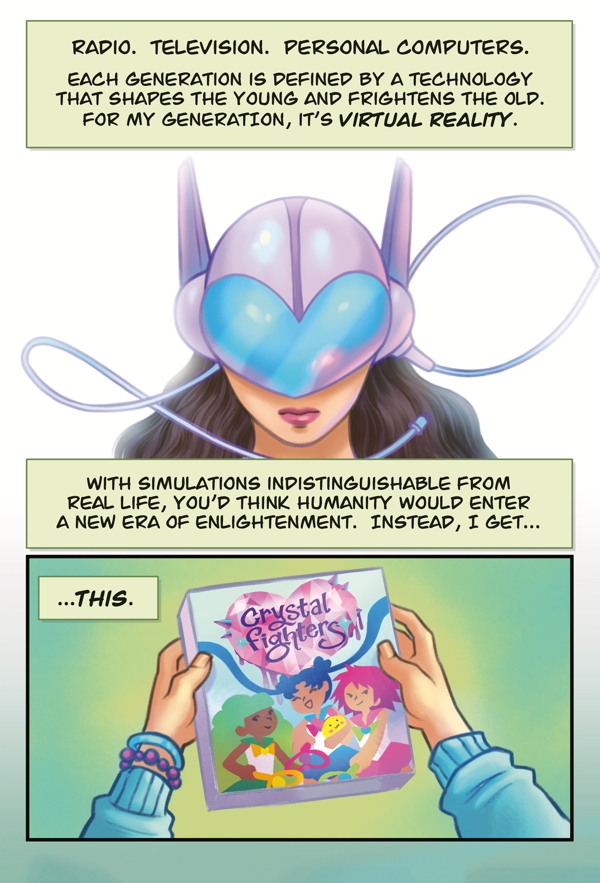 FS: The book is dynamic throughout, from the battles in the arena to Stella stewing in class. The reader can’t help but be pulled in. How did you decide what you wanted the look of the book to be?

JTB: We wanted it to be really cute and accessible, but finding a way to balance that cute style with some of the battle scenes was indeed pretty challenging! Referring back to anime properties like One Punch Man, DBZ, and Magic Knight Rayearth helped us solidify a look that could accomplish what we needed.

FS: The two of you created the story together. How did you decide on the division of labor on crafting the book? Or was it more of an organic process?

JTB: As a husband and wife team, we were a little worried that working together might actually be even more challenging than just being regular co-creators, but it worked out amazingly. We’ve known each other since we were both teenagers ourselves and we’ve been best friends for over a decade, so everything happened really organically. It also helped that we both have an art background (Jen ultimately drew and colored the book, but Tyler is a skilled artist and designer as well) so when words weren’t cutting it, we could draw out what we meant and write scripts that were more “visual”, with sketches.

FS: While the story felt wholly your own, I felt echoes of everything from Street Fighter to Sailor Moon to Pokemon. Are there any particular influences that help guide or at least impacted the book?

JTB: Definitely the two largest influences were Dragon Ball and Sailor Moon. I’ve seen a lot of people write off Sailor Moon as being “just for girls”, “sweet”, “cute”, etc—but in reality these girls are soldiers who battle enemies in every episode! They get hurt and even die pretty much every season. The “magical girl” genre is more than what it looks like on the surface, and we wanted to capture some of that in Crystal Fighters, as well.

FS: Without giving anything away, the book ends on a bit of a cliffhanger. Is there anything you can tease about what we can expect beyond this first volume?

JTB: We’d love to expand on Stella’s story and reveal more behind the veil of the Chaos Arena and those that created it—it’d be super fun to show a grand tournament of fighters from other games that Stella has to navigate though, but it’s ultimately going to depend on audience reception—if folks want to see more Crystal Fighters, pre-ordering the book will allow us to explore some of those ideas!

Stella’s a bored teen who’s part of the first generation to grow up immersed in a world of virtual reality games, in which she discovers a secret magical girl fight club. Now that she’s gotten her wish of finding something exciting in her life, she also discovers a dark side to magical girls, and finds herself having to prove her worth in a series of tournaments where, if she loses, she can never come back.