This past weekend, the Angoulême International Comics Festival, featuring creators from across the globe, took place in France. There’s no better place for such a gathering of artists to convene than in the country that has been a wellspring for the artists for centuries. For those of us who weren’t able to attend, however, creator Jen Vaughn–whose credits include Avery Fatbottom: Renaissance Fair Detective, Mermaid Hostel, and Negative Space–has provided readers with a travelogue of her time at the festival. Sponsored by comiXology, her adventures are now available to check out over at Mental Floss.

Just prior to the start of beginning her travelogue, Ms. Vaughn was kind enough to speak with me about her time at the festival, her influences, and how being around so many of her fellow creators has inspired her art.

FreakSugar: Thank you so much for taking the time to speak with us! Is this your first time attending the Angoulême International Comics Festival? How did you become into partnership with comiXology for this event?

Jen Vaughn: This is my second trip to Angoulême, back in 2014 I attended and did some reporting for Tom Spurgeon on Comics Reporter. ComiXology and I have been friends for years, first through attending conventions as a cartoonist, then as the marketing manager at Fantagraphics and now again as a cartoonist (everything is cyclical). Chip Mosher, Jon Roberts, David Steinberger, and the rest of the crew have always been supportive of my work and laugh at my jokes.

FS: For comiXology, you’ll be drawing a series of cartoons about your experiences. Will you be concentrating solely on your time at the Festival or as a traveler or a combination of the two?

JV: You cannot talk about the Festival International de la Bande Dessinee and not talk about French culture. The food is so rich yet healthy in moderate quantities. In addition so speaking very little of the language, you experience the wonderful immersion in anonymity and an observer.

FS: France is known for many things, its art chief among them. Does just being in the country ignite a different type of creative spark? Traveling in general must do that, I imagine, but France has that artistic energy about it.

JV: Absolutely, the air is different, the landscape is different. Any travel where you are outside your comfort zone pushes the buttons in the brain. Now I’m jazzed to hit the drawing table when I get home.

FS: As an American cartoonist, what’s the thing you’re most anticipating about attending the festival?

JV: Connecting to other cartoonists is what I’m most looking forward to. Thanks to the internet, it is so easy to see new work and speak to people virtually but the rhythm of conversation, a back and forth and connecting of minds you would otherwise never met is what I crave. Meeting up with old friend + cartoonist Cliodhna Lyons and writer Jeremy Melloul was a hoot. I’ve also had the most enjoyable conversations with Olivier Jalabert from Glenat (a long time Fbook friend) and some Spanish artists who came to the Comics 101 panel I was on, along with Jalabert, Chip Mosher, David Steinberger and Amelie Milet (of comiXology), sought me out afterwards and we have a lovely time! Rocio “Call me Rainy” Vidal and Antonio Guardiola shared their sketchbooks and com)ic proposals with me in such an earnest manner I was instantly enamored with them. Plus, they have some powerful skills under their belts. 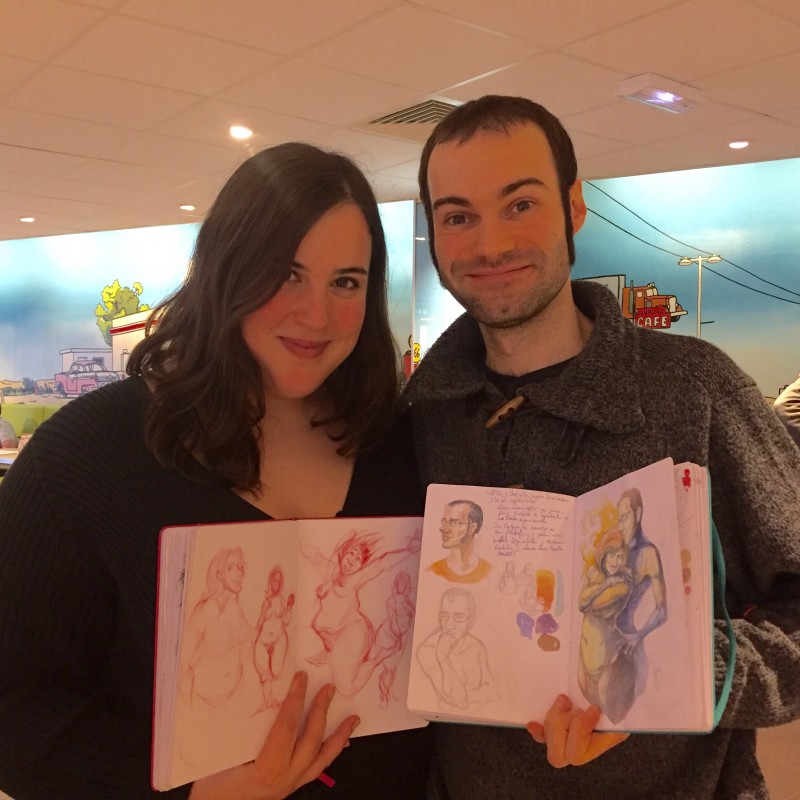 FS: Have you done much traveling in the past? How has that informed your cartooning and how do you hope your time this weekend will add to that body of work?

JV: The extent of my international travel is sad, the accessible parts of Canada, a lot of Mexico, Angouleme once before and England. After Angouleme, I’m heading to Bordeaux for a few days, although the wine-besotted comics are probably not for public eyes. In May, I’m traveling to Iceland and Ireland with my boyfriend and will create a travelogue of our adventures there, searching for elves, brownies and fairies. Usually I shy away from autobio work because writing fiction and non-fiction is more of a challenge, relying less on how charming your personality is, but travelogues work also a scrapbook for your adventures.

FS: With so many creators from other nations coming together for this festival, what do you hope to take away from your time talking with cartoonists and writers and artists from across the globe?

JV: There are so many cartoonist and mangaka I admire—I spent three years or so working in the Schulz library at the Center for Cartoon Studies in Vermont and read constantly. Mathieu Bablet with several books from Ankama (La Belle Mort, Adrastee), Amelie Flechais with her beautiful storytelling and design from the Soleil line. Junji Ito (Uzamaki), Rumiko Takahashi (Ranma 1/2, Maison Ikkoku) and Moyoco Anno (Sakuran; Sugar, Sugar Rune) suck you into their work like a tragic undertow. Emily Carroll, can I use her as an example? She’s Canadian now. Her and Charles Burns, if you ever wake up in one of their comics, DON’T TAKE YOUR PANTS OFF. Nothing good will happen.

FS: Do you have any international cartooning influences that inform your work today?

JV: In addition, the Americans—-I could list people into infinity like just the way pages by Charles Burns, Jaime Hernandez, and Becky Cloonan flow, they are dreamweavers who induce you into a hypnotic state. The work of my friends who have been working at the same time as me has also had a huge impact on me, Laura Terry (lauraterry.com), Nomi Kane (who now works at Peanuts), Lucy Bellwood (Baggywrinkles), Moritat (Jonah Hex, The Spirit), Noah Van Sciver (Fante Bukowski, The Hypo), Colleen Frakes (Tragic Relief).

FS: What work can we expect coming from you next down the pike?

JV: Aside from my travelogue on Mental Floss, I’m five pages from finishing Avery Fatbottom: Renaissance Fair Detective #2 (issue #1 is 99 cents on comiXology!), I’m also drawing a one-shot comic written by Australian Ryan K. Lindsay (Negative Space) with some nasty characters, it’s such a delight to draw reprehensible people! There are some larger/long-form comics currently under editorial process at a few publishers, mostly of the sci-fi and fantasy genre. The characters in those stories tap on the window of my mind like wraths who are quietly gaining strength. 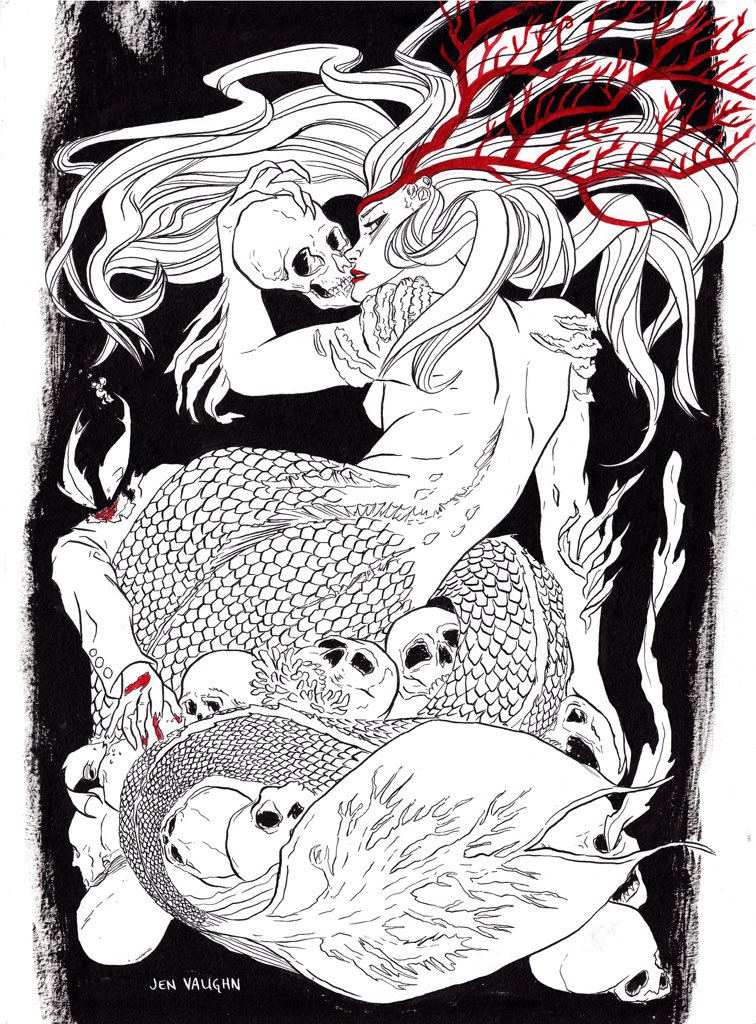 Be sure to check out the account of Jen’s adventures at the Angoulême International Comics Festival over at Mental Floss!