Harley Quinn, DC Comics’ First Lady of Mayhem, has had a slew of teammates over the years. The sometimes villain/sometimes anti-hero has partnered with everyone from The Joker to Wonder Woman to occasionally even the Dark Knight himself. However, in those partnerships, she’s rarely had the opportunity to be in the driver’s seat, directing the action and making decisions for a group under her leadership.

In Harley Quinn and Her Gang of Harleys #1, the first issue in Dr. Quinzel’s all new miniseries, the off-kilter tornado of chaos is calling the shots for her own team of Harley-themed sidekicks, spinning out of the events in her main series. I recently caught up with the book’s writers Jimmy Palmiotti (who also writes the Harley Quinn series) and Frank Tieri to discuss the conceit of the story, what Harley gets out of partnering with the team, and why the character appeals to fans and creators alike.

[Warning: Spoilers ahoy! Also, a gaggle of non-sequiturs and hilarity ahead!]

FreakSugar: Thank you both so much for speaking with us!

Jimmy Palmiotti: By the way, my pet name for Frank is FreakSugar. [laughs]

Frank Tieri: Take that as you will! [laughs]

FS: For folks who might be considering picking up the book, how would describe Harley and Her Gang of Harleys?

FT: How would I describe the book? Well, you have the gang of Harleys from the main title and this is an opportunity to see them as individuals. One of the main goals of the book is to give them their own voices. We start off with Harley orchestrating a fake kidnapping. She plans to have the gang step up and to get out of her shadow.

JP: Frank, just admit you forgot what the question was. Just admit it. [laughs] You want to repeat it?

FT: Oh, you want him to repeat it? So somebody else forgot what the question is! [laughs]

JP: I was trying to help you, Frank. You veered off a little bit. [laughs]

FS: I thought you were doing a great job describing the book, Frank.

JP: Jed’s obviously got manners beyond anything I’ve ever imagined.

FT: I was describing the book and you chimed in! [laughs]

JP: That’s why we have so much fun with this book! We do this all the time. [laughs] Like Frank said, the book is an opportunity to take the gang out of the main series, to follow their adventures, and to build up who they are and how they fit into Harley’s world.

FT: Isn’t that what I said?

FS: How about this? You’re both right. 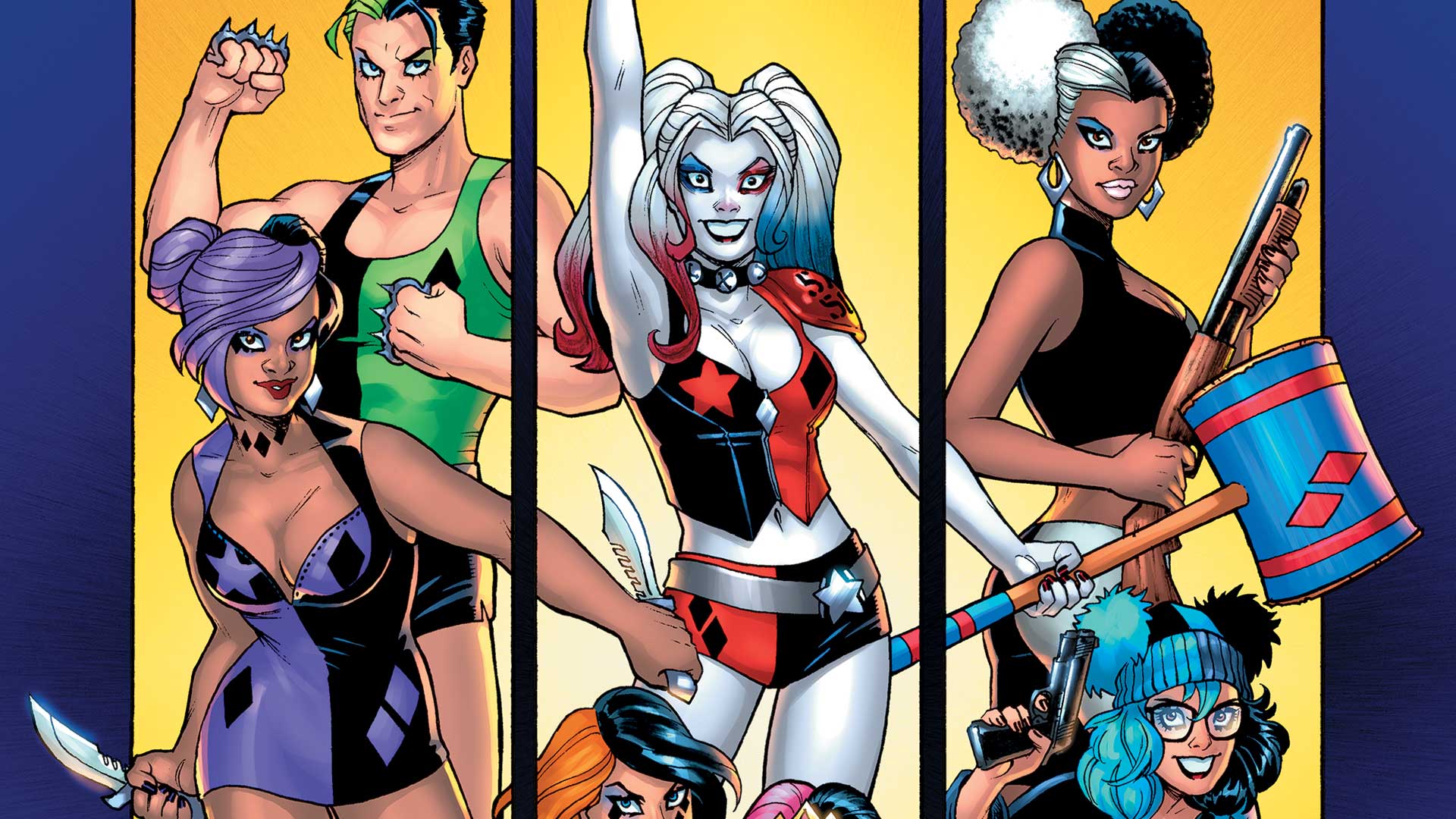 HARLEY QUINN AND HER TEAM OF HARLEYS #1

FS: The hipster shakedown, where Harley and her gang attack hipsters in Brooklyn, was a beauty to behold.

FT: I live in Brooklyn and Jimmy’s originally from Brooklyn. One of the things that’s happening here is that Brooklyn’s not Brooklyn anymore. There are parts of Brooklyn that are hipster central, especially Williamsburg. So it’s fun to take down Williamsburg a little bit and that hipsterati culture. I live in one of the last bastions of Brooklyn where the hipsterati hasn’t broken in yet. [laughs]

JP: If I knew the term you used, “hipster shakedown,” that would’ve been the title of the first issue. [laughs] Look, it’s kind of fun to poke at the way the world is. These characters are deeply rooted in the boroughs. And there are folks who just moved there like the hipsters.

JP: And the scene’s important because we get to see the gang for who they are and what they think. Even in sarcasm, you learn a lot about a person. The point of the story is to get new readers up to speed and to get folks who followed the main book right in there with the action. And hopefully, by the end, we can hook them for five more issues. 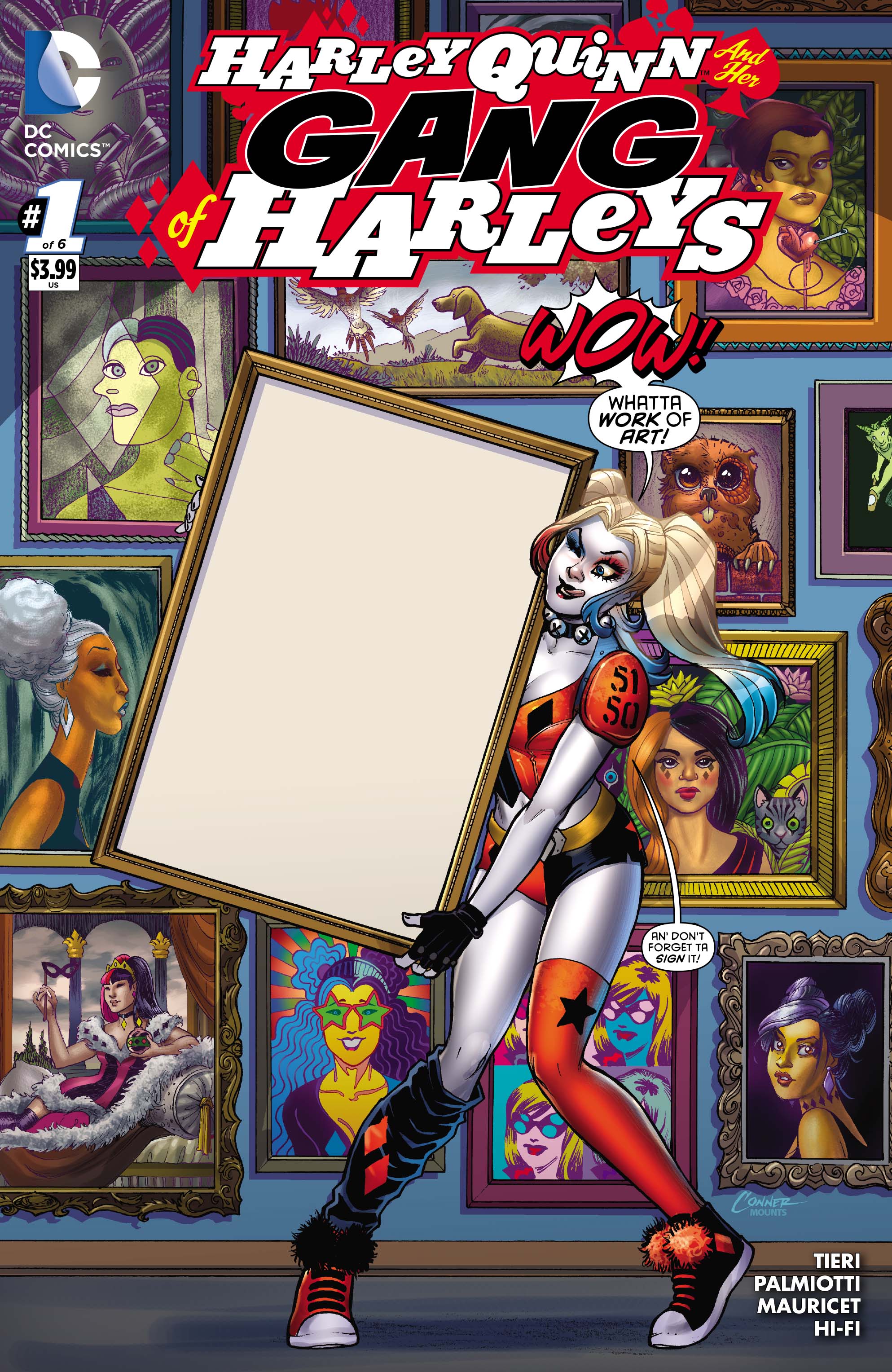 HARLEY QUINN AND HER GANG OF HARLEYS #1 alternate cover

FS: Harley has teamed up with other characters before, but, with the Harleys, she’s taken on this leader/mother type role. What do you think she gets out of associating with them?

FT: I think she looks out for them the way somebody should have looked out for her when she first came out. Now she wants them to step up and be their own people, not relying on her as much.

FS: That ties into the larger plot of Harley’s fake kidnapping.

FT: Which is what I was trying to talk about in the beginning and Jimmy wouldn’t let me finish! [laughs]

JP: Oh, should I FedEx some tissues over there for you? Are you okay? [laughs]

FS: What can you tease about how the fake kidnapping went awry and who has a grudge against Harley?

JP: Frank, can you talk through all those tears?

One of the purposes of Harley Sin is to contrast her with Harley Quinn. Harley isn’t a hero or villain, she’s in the middle. Harley Sin is clear-cut. She’s a villain. She’s a darker character. Hence the name Harley Sin. Which I came up with by the way. And the Sin-dicate!

JP: Yeah, you came up with the word the Sin-dicate. Congratulations.

FT: Jed, let me ask you a question. Sin-dicate. With the hyphen! That’s thinking there!

JP: Frank, that is brilliant. Oh my God! I’m calling the Nobel people to come over to your house. [laughs]

JP: Frank just wants to be loved. That’s what we learned today. [laughs]

FS: Overall, what do you think is the appeal of Harley Quinn for the creators who work on the character and for readers?

JP: I think Harley is a very wish fulfillment character. The fact that she can get pissed off and do something about it without repercussions has always been a fun part of the character. She’s also a character who’s been an underdog and has stepped out of that place to become her own person. There’s a lot about the character to like.

And then there’s the visuals of the character. She looks cool. She’s one of the few characters who can change costumes every issue in some way and still we say, “It’s Harley Quinn.” Very few characters can do that.

And then she’s taken the cosplay world by storm. Part of that is the association of people loving her attitude and she’s a little dangerous and sexy and fun. A lot of people think they have that in them and that’s great. We love the cosplayers. And the cosplaying has definitely been an inspiration for the gang of Harleys and the series and introducing them when Amanda [Conner] and I created them for the regular series.

FT: I break balls and everything, but Amanda and Jimmy have done wonderful things with the character and they certainly don’t need me to come in and tell them how to do Harley and the gang.

JP: Keep going. [laughs] I like where you’re going with this.

JP: Frank can be nice. I read that somewhere. [laughs]

FS: This has been one of the most entertaining interviews I’ve had the pleasure doing.

Harley Quinn and Her Gang of Harleys #1, written by Jimmy Palmiotti and Frank Tieri with Mauricet on art, is on sale now from DC Comics.