Jimmy Palmiotti and Justin Gray are comic industry professionals who are unquestionably some of the best storytellers in the business, their names becoming synonymous with tight, engaging tales that can’t help but pull the readers in with every page.

Much to our delight, the duo have paired up again to bring their narrative prowess to the new Cell Block Earth and Other Stories trade paperback, out this Wednesday from Dark Horse Comics. In the trade, reader will find Palmiotti and Gray’s unique spin on some of the genre fiction’s familiar tropes, leaving their indelible mark to make what’s old new again. And included in the compilation is a brand-new story by Gray and Palmiotti, “Cell Block Earth,” a science fiction yarn that’s particularly timely in our current geopolitical climate.

Mr, Palmiotti and Mr. Gray spoke with me recently about the conceit of Cell Block Earth and Other Stories, the inspirations behind the tales therein, and the narrative DNA that their stories share with other pieces of fiction.

FreakSugar: For folks considering picking up the trade, what can you tell us about Cell Block Earth and Other Stories?

Jimmy Palmiotti: This book has 96 pages of story and the first one featured is also the story that has never been seen before and that’s “Cell Block Earth”! The main story is about aliens dumping their criminals on earth and leaving them for us to deal with and the chaos that ensues, featuring the amazing art of Juan Santacruz, my artist on Painkiller Jane and The Resistance.

The second story, “The Deep Sea,” is about a well-known group of explorers lost at sea during a dive that goes wrong that is found 40 plus years later, and haven’t aged a day. That features the art of Tony Akins and Paul Mounts.

The last story is called “Wrestling with Demons” is about a father and daughter that get into a pickle where dad has to wrestle demons to get his daughter back. That features beautiful and graphic storytelling by Andy Kuhn and John Rauch.

Justin Gray: As Jimmy mentioned it is a great looking book, the art for all three stories is top notch, the coloring and design of the collection I think is something people will enjoy. From the storytelling side of things Jimmy and I did our best to provide entertaining and emotionally engaging stories in genre’s we love and that have become increasingly popular in recent years. 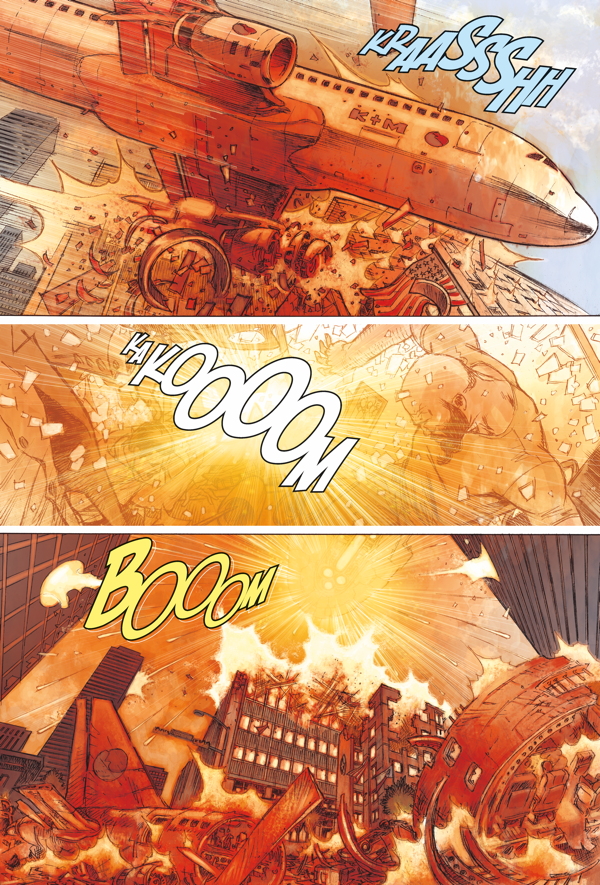 FS: Justin, you spoke a bit about the inspirations behind these stories in the trade’s forward. What can you tell us about those inspirations and how they moved how you crafted the tales therein?

JG: This explosion of genre fiction and material that was somewhat treated as trash or cheese kid’s stuff in the past is interestingly the dominant or most popular genre right now. The people who came of age watching the kinds of films I mentioned in the introduction, Kaiju, martial arts movies, monster movies and so on are now making films and telling stories influenced by those things. The Shape of Water is essentially a variation of Creature from the Black Lagoon and it won best picture this year. 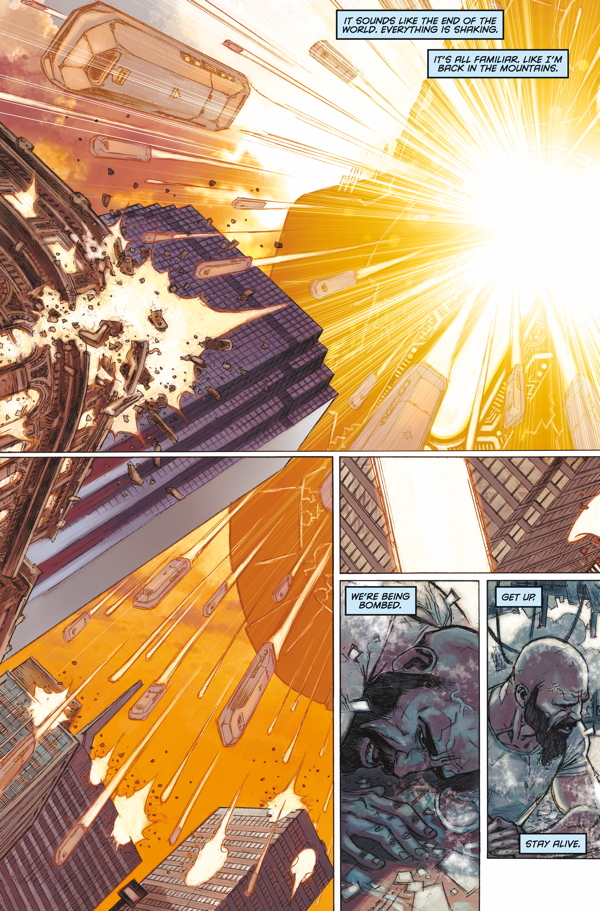 FS: “Wrestling with Demons” and “The Deep Sea” both originally appeared in Dark Horse Presents. If those stories and “Cell Block Earth” had a thread—either thematically, emotionally, or something else—what would it be?

JG: They’re all rooted in the pulp fiction genres of the past, but with modern twists or set pieces. “Demons” is rooted in monster movies with some Manga influences, “Deep Sea” is rooted somewhat in Jules Verne and Kaiju, and “CBE” is, at its core an alien invasion story. The twist is that the aliens are all convicts and criminals from alien civilizations being dumped on our planet.

JP: I think the thread is everything you think you know is something else and the world is a bizarre and wondrous place. 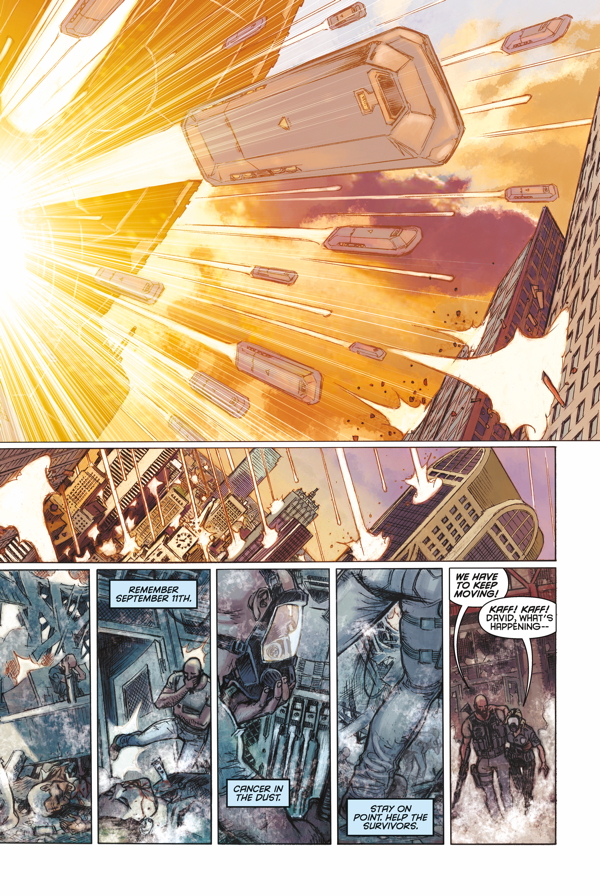 FS: “Wrestling with Demons” is about, in part, faith, love, and why we make the choices that we do for those we care for. What was the impetus behind the creation of this story?

JG: It grew organically from a simple premise about humans having prize fights with demons, but as the story took shape and the characters emerged I felt like “WWD” took on a heavier emotional context. Part of the idea is that just because you have faith in a higher power it doesn’t mean you have to be cast as a stereotype of that faith. That’s something I intend to explore further in a book I’m writing now. 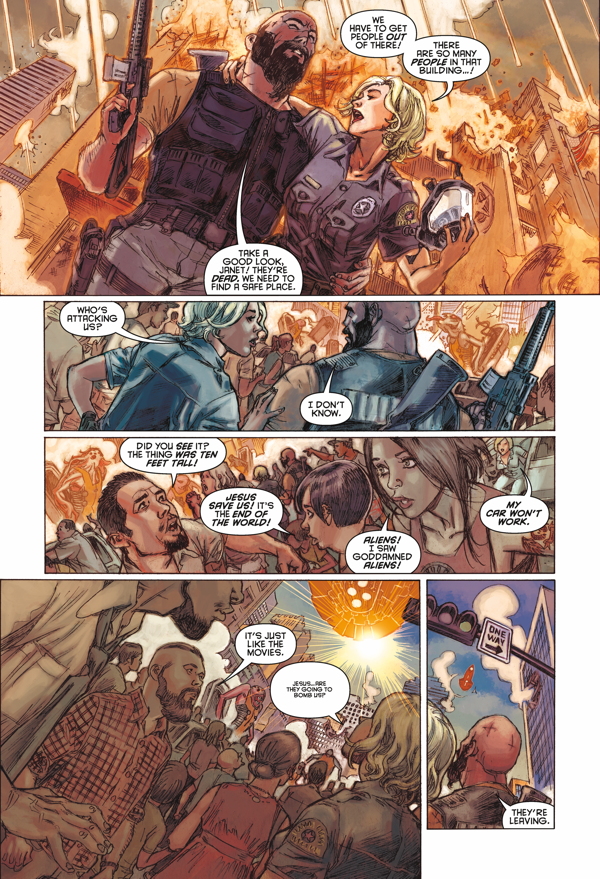 FS: Throughout “Cell Block Earth,” there are mentions of events such as 9/11 and wars in the Middle East. Where there any intentional efforts to allude to parallels of those events and those see in “Cell Block Earth”?

JP: The idea presented is that these events changed the world we live in and with “Cell Block Earth,” once again it is outside forces that bring about this change. All of these have stories about survival and retaliation in some sense.

JG: There’s more of an allegory of “the sky is falling”, and I think those are events and causes everyone normally looks to when they’re trying to comprehend a disaster of this magnitude. 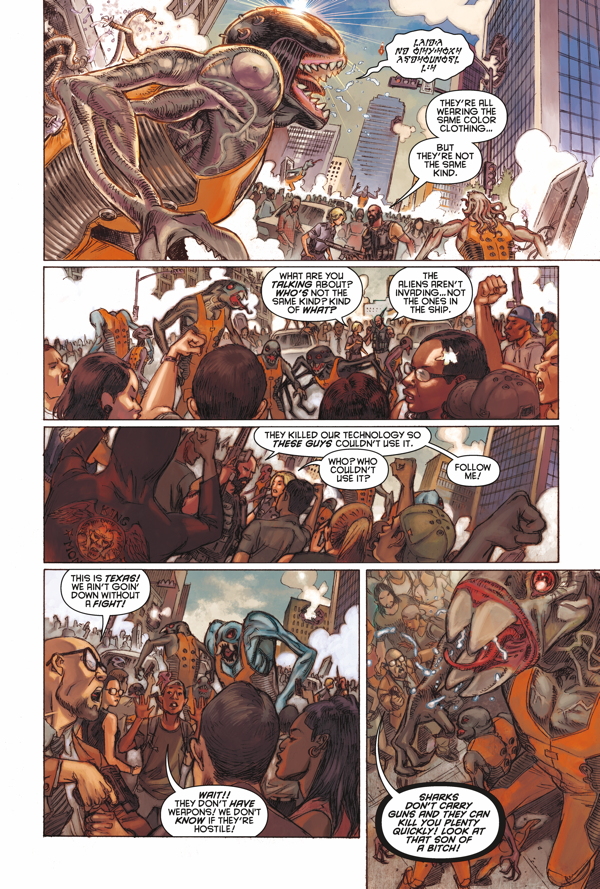 FS: “The Deep Sea” has a very Fantastic Four/Jules Verne vibe to the tale, which I adored. What is it about those types of stories that are particularly fun to delve into?

JP: These are the type of stories I grew up reading as a kid and your description of them is probably the most flattering thing ever said to me. I love the idea of a world where bigger than life adventures happen with themes of lost love and life are the key to the core of the story. I think we all crave unknown worlds in one way or another, but fear is the wall we have to knock down to get to it, and it’s not so easy, so having books that feature these adventures is the next best thing. 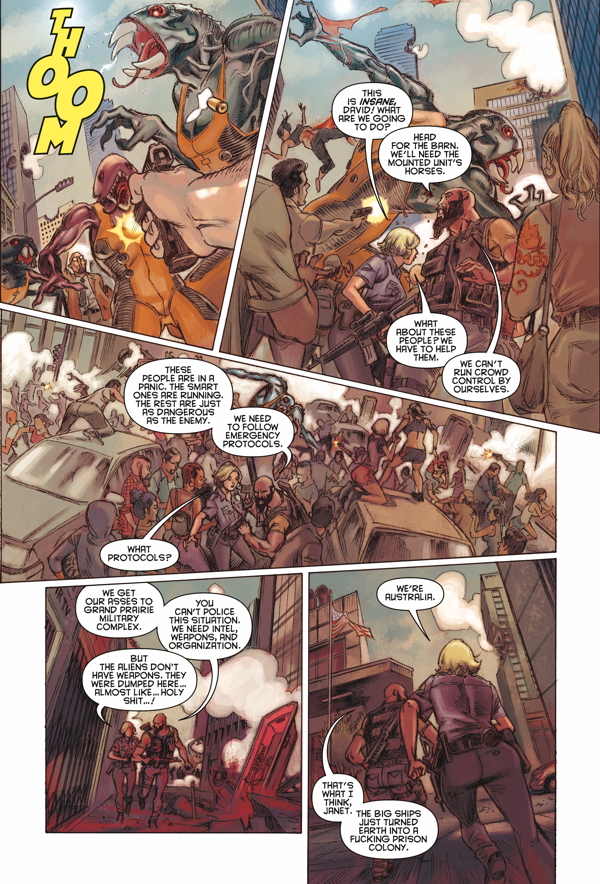 FS: “Cell Block Earth” ends on a cliffhanger. Are we getting the chance to see what happens next between the alliance of the people of Earth and the alien political dissidents?

JG: Obviously the premise is huge and there’s tons of room for expansion and delving into the aftermath of “CBE” and it is something we’re hoping to expand on in the future.

JP: Our hope is the book gets some attention and sales and we are asked for another chapter to finish the story out a bit more. We have our fingers crossed.

The Powerhouse writing team of Jonah Hex and Power Girl reunite for an invasion of alien criminals, a fighting ring of monsters, and giant sea creatures.