We live in a world populated, in part, by awful people who make awful choices every day. We can’t deny this, nor should we. In art, creators sort through the decay of everyday life to give us hope, to entertain, and to inspire.

Writers Jimmy Palmiotti and Craig Weeden and artist Justin Norman touch upon all of those notions in their new Kickstarter project Killing Time in America from PaperFilms. In Killing Time, Palmiotti, Weeden, and Norman throw the magnifying lens on a group of people with cancerous rot where their souls should be, who have come to America to settle what they see as an old score. It’s a story that is both timely and transcends era and geography.

Mr. Palmiotti spoke with us about the idea behind Killing Time in America, the influences that helped form his and the creative team’s tale, and the various themes they wanted to explore with the graphic novel.

We also have an exclusive colored preview of page 27 from the book to give you an idea of how beautifully rendered the book truly is.

FreakSugar: For folks who are considering contributing to the Kickstarter, what can you tell us about the conceit of Killing Time in America?

Jimmy Palmiotti: At its most basic it is a story about a bunch of bad, very bad, horrible people getting tracked down by someone that may have a history with them. It’s a story examining the horrors of what people are capable of, but it is not without a spark of hope. I would say it’s a wild ride that includes sex and violence throughout mixed with drama and the over the top madness that graphic storytelling can do like nothing else. At the core, we just want to entertain people with a solid story and beautiful art wrapped in a hardcover package that looks beautiful

FS: There’s quite a bit in the first volume to unpack. It seems like this idea has been gestating for a long while.

JP: It was an idea first, then a screenplay by Craig Weeden and I, and then it became a graphic novel. We wrote the original screenplay to one day produce and even direct ourselves, but I couldn’t wait and Craig and I decided to adapt it to a graphic novel… something I absolutely have more control over. We have been working on and off on this book for the past year. It’s been a wild ride for me mainly because I had to do this between writing Harley Quinn each week. I am finally of that train and it’s so wonderful to get back to my roots of creating brand new stories.

FS: The book follows a group of Germans dispatched by a group to kill Americans for a purpose we learn throughout the course of the graphic novel. What can you tell us about the crew who goes to the US and the group that sent them?

JP: It’s all about a screwed-up tradition that became a bit more out of control over the years. We have a group of killers that seem to want the same thing, and then, things get complicated between them, basically because we are dealing with some twisted individuals. It’s also a commentary about how useless revenge can be and how society can twist just about anything to serve their purpose. Sadly, we see this happening in the world every single day and feel powerless to stop it. With this story, we hope we are shining a light on just how far people can go to be entertained… at a distance. We have a lot to say about a lot of things in this story- it’s also why we needed so many pages to tell it. 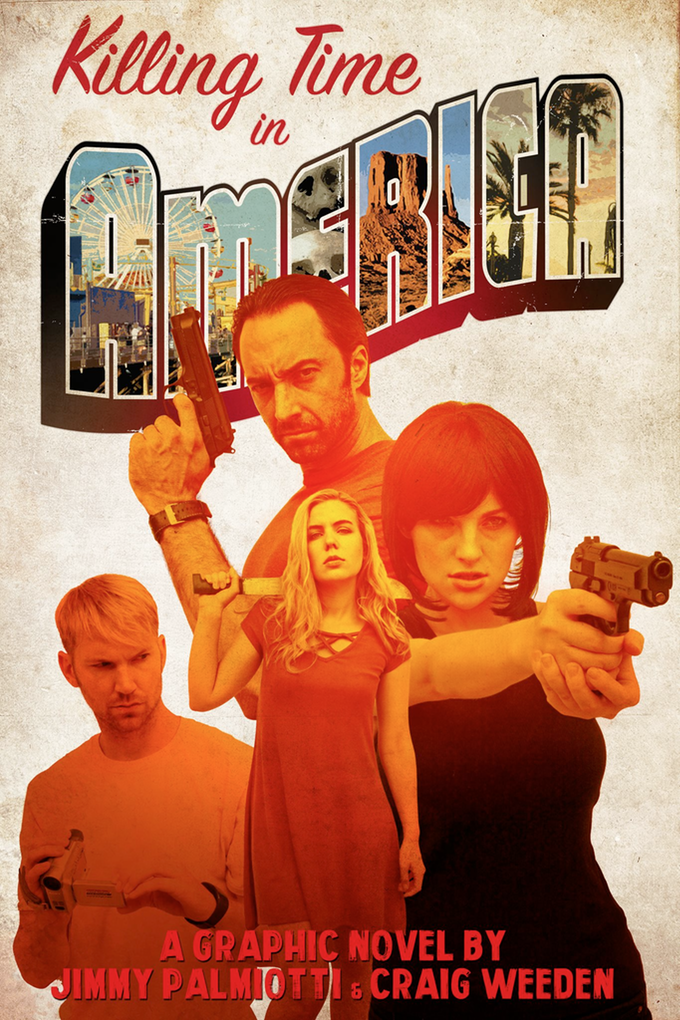 FS: Tell me if I’m off, but the title seems to have three different allusions: the actual killing that takes place; a reference to the revenge that the group is committing and how it’s a grudge that stretches decades; and how some of the crew who’ve gone to America treats the mission. Is any of that right?

JP: Yes, all of that and more. When I came up with the title I was thinking the story says quite a few things and the title should reflect that and mean something different to everyone. The story is a homage to films like Natural Born Killers and Hostel with a bit of Friday the 13th and Halloween thrown in. It’s an adult story with a lot of nudity and violence and it’s either for you, or it isn’t. Not everyone enjoys this genre. I feel this story differs from a lot of current horror mainly because as bleak as it can seem, again, there is some hope involved, even in the worst person. It strips away layers of the characters as the situation changes around them and I think Killing Time is  an entertaining study of people that we  know are out there in the world and how when it comes down to it, the classic themes of good vs. evil, the battle that is always present in our lives.

FS: The book, in part, taps into some of our voyeuristic proclivities we’ve gained as technology and entertainment have changed over the years. Are there any influences for the book that share DNA with the story you wanted to tell?

JP: We touch on a lot of different things, including a homage to Psycho with the voyeurism themes throughout. I think it’s gotten out of hand with people having less and less privacy and the funny thing about that is a lot of people choose to give this information willingly.  Facebook itself is a public display of just that, and social media is becoming more and more dangerous as well. In Killing Time in America, we deal with a force that is out of control and the innocent people that get in the way. What motivated this idea in the first place was how on the internet and in the world around us, there are groups of people that are into so many weird things, why not create something scary and grounded in reality and follow what we imagine they would do and deconstruct the motivations and get into the heads of these guys. The main characters except for Hobie the cop are horrible people from minute one, but some are carrying the weight of their parents and generations before them and haven’t figured how to deal with it. On the surface the story seems to follow a very linear direction.

FS: While the series takes place in the present, was there any research you did about Germany in World War II? Or, in terms of the killers themselves, did you do research in how law enforcement goes about investigating killing sprees like we see in the book?

JP: You mean besides the 100,000 hours of Law and Order I have watched? Well, Craig and I always do research on everything going into a story and with that information we only use what is needed to continue to keep the idea grounded. As far as serial killers working together- this is new territory since that doesn’t happen much, and we address how it becomes harder and harder for the killers to stay on the same page. Egos and fears come into play and a personal drama is what gets them in hot water at times. I will say we mapped out quite a lot of things that do exist, including the location of the story. 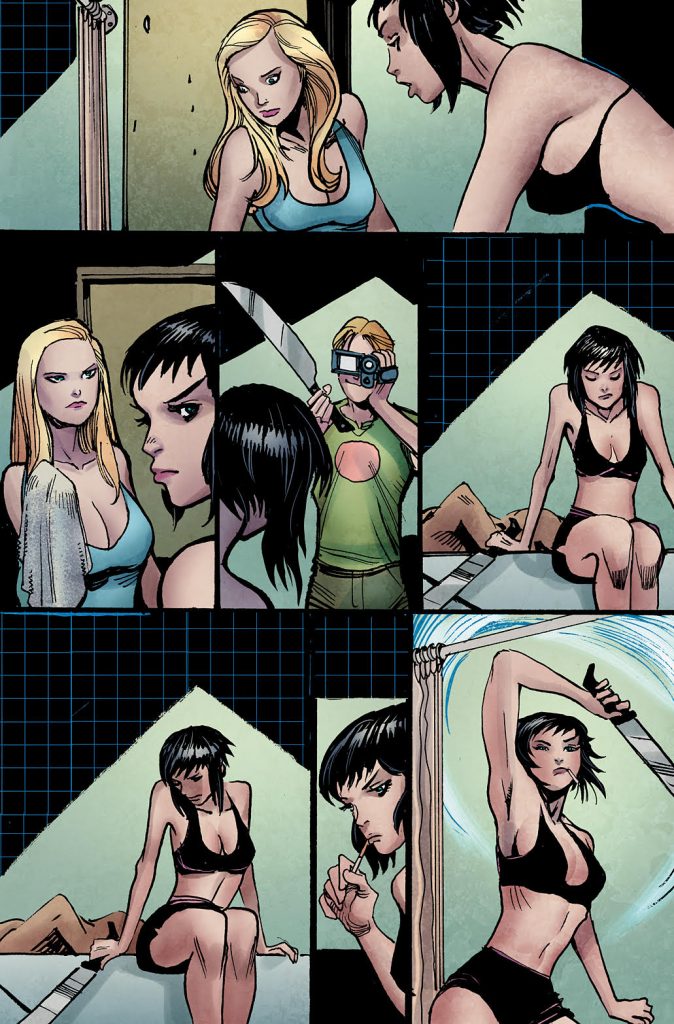 Exclusive colored preview of page 27 of KILLING TIME IN AMERICA

FS: What can you tell us about the Kickstarter campaign and the rewards for backers?

JP: The Kickstarter campaign went live last Monday and a couple of pledge levels sold out, but we have some other pretty cool ones available still. We have signed hardcovers by us, a special edition cover by Amanda Conner, Dave Johnson and Moritat prints and even pledge levels if you have a business and want to offer them to sell. We tried to give everyone something interesting and the focus is on the exclusive art we have created just for the campaign. My personal favorite levels are the cheapest ones since you can get a digital version of the book for only $8 bucks and for a few dollars more, we send you a digital version of the actual screenplay. I prefer digital levels mainly because we can send the work worldwide and not have to deal with all the shipping costs. It’s expensive to send things around the world these days.

FS: Without giving anything away to folks who haven’t yet read Killing Time, you seem to leave the door open to more stories. If this Kickstarter is successful, would you want to revisit the world you and the team have created?

JP: Yes. That has always been the plan. We set up a lot of backstory for that main reason and although as a standalone it delivers everything you need; the open-door nature is what we are really excited for. When we first wrote this, we were going to try to raise money to make a film, but to be honest, my audience is in comics and if I tried to raise money for a film on Kickstarter the amount would be a ton and it would never hit its goal. That is my reality. My dream is to do more books and get to adapt the screenplay ourselves with a backer. Look, I dream big and that’s always been a problem, but once in a while dreams do come true. My dream today is to see this Kickstarter backed and get the book into as many hands as possible.  What I really want is simple. I want to produce quality work for my audience. With Kickstarter, this is happening.

The Kickstarter for Killing Time in America is now live with just under $2,000 shy of its goal in just one week. As Mr. Palmiotti said, there are still many phenomenal rewards available for folks who pledge. And as someone who’s read the book, it’s well worth backing, as the whole team offer a compelling, action-packed story that looks at the underbelly of humanity and asks us to face our baser impulses. Give it a look!