Writer Joe Casey has a prolific body of comic book and animation work behind him, collaborating on everything from X-Men to Superman/Batman to Ben 10. However, for his new Image Comics graphic novel, Casey is looking both to stories of a familiar Nazarene and 1970s exploitation comics.

In Jesusfreak, Casey and illustrator Benjamin Marra reimagine the Jesus story as focusing on a man willing to use force if necessary to stand against the oppressors of Judea—be they political or supernatural. However, as much as there are instances of Jesus doing violence on soldiers or snake men, Jesusfreak also concerns itself with his existential journey.

Mr. Casey spoke with me recently about the idea behind Jesusfreak, the look and the feel of the book, and how telling his version of the story of Jesus was a challenge and exciting. 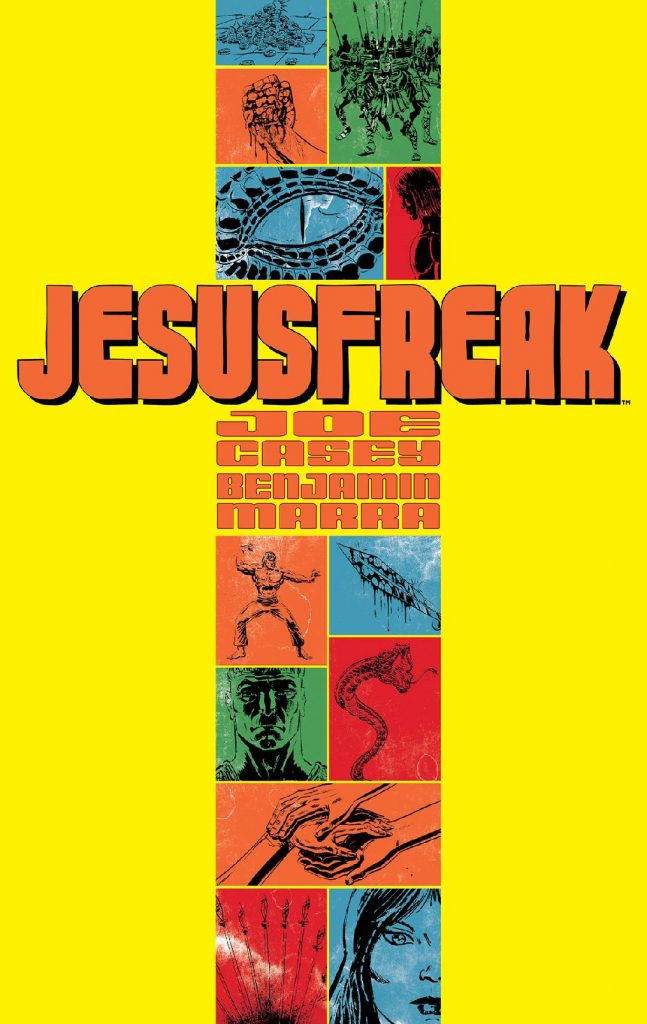 FreakSugar: For folks who are considering picking up the book, what is the conceit of Jesusfreak?

Joe Casey: Simply that there was a young carpenter who lived in early First Century Judea who finds himself confronted by strange internal forces that lead him on a surreal path to self-actualization in a world where that kind of individualistic thinking could get you killed by the political state that existed at that time.

FS: Your take on the Jesus story is a unique one and feels incredibly fleshed-out. What was the genesis for this slant on Jesus?

JC: I was interested in writing a work historical fiction, something that required heavy research. At the same time, the idea of collaborating with artist Benjamin Marra meant we could tell this story using specific storytelling aesthetics straight out of a bygone era of comics that hugely influenced both of us. 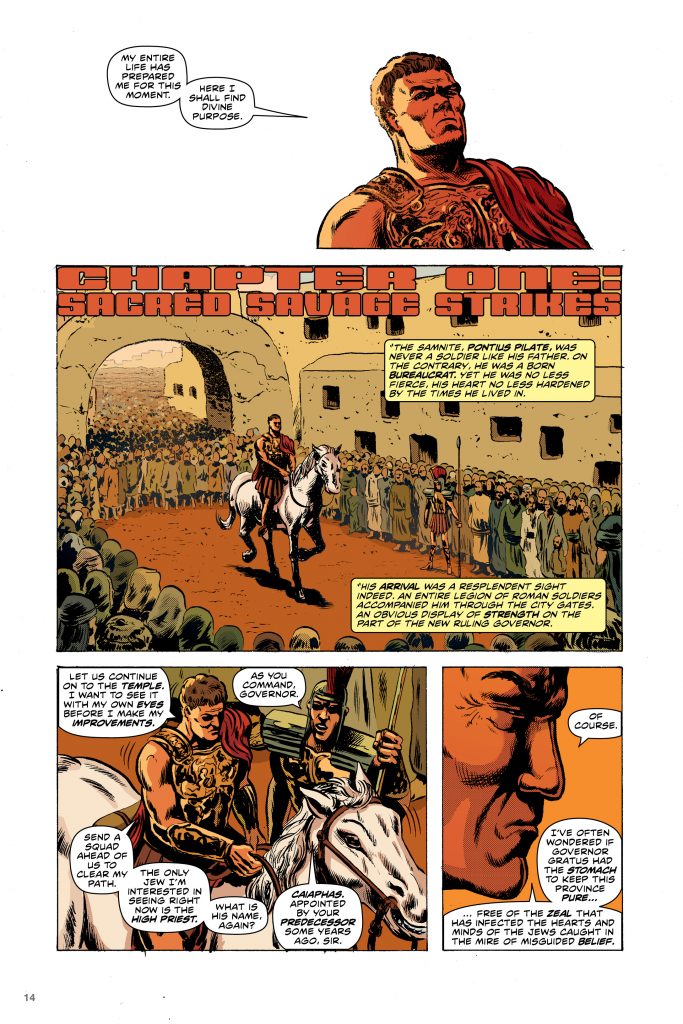 FS: Following up on that, as a religion major, I was heartened by some of the historical details you imbued into this first issue. What was the research process like for Jesusfreak?

JC: As you could probably surmise, the research involved was much more archeological than Biblical. I looked into the time period, the politics, etc. There have been quite a few books and articles over the years that explore the idea of the “historical Jesus” that were incredibly helpful. Visually, we made sure we were true to the architecture of the era. Everything beyond that was pure imagination.

FS: The graphic novel has already gotten a lot of attention, and not always favorable. Are you surprised by the reactions you’ve received so far?

JC: I never think too much about the attention something I’ve done is going to get, or ends up getting. I’ve been more preoccupied with making sure the book was up to a standard — from content to production to printing — that we would ultimately be proud of. So far, so good… so whatever comes after, either positive or negative, is always a bit of an afterthought. I knew the subject matter alone would cause some curiosity from sectors that normally wouldn’t care about my work, but that’s fine. Good Art isn’t meant to be passive, it’s meant to engage. 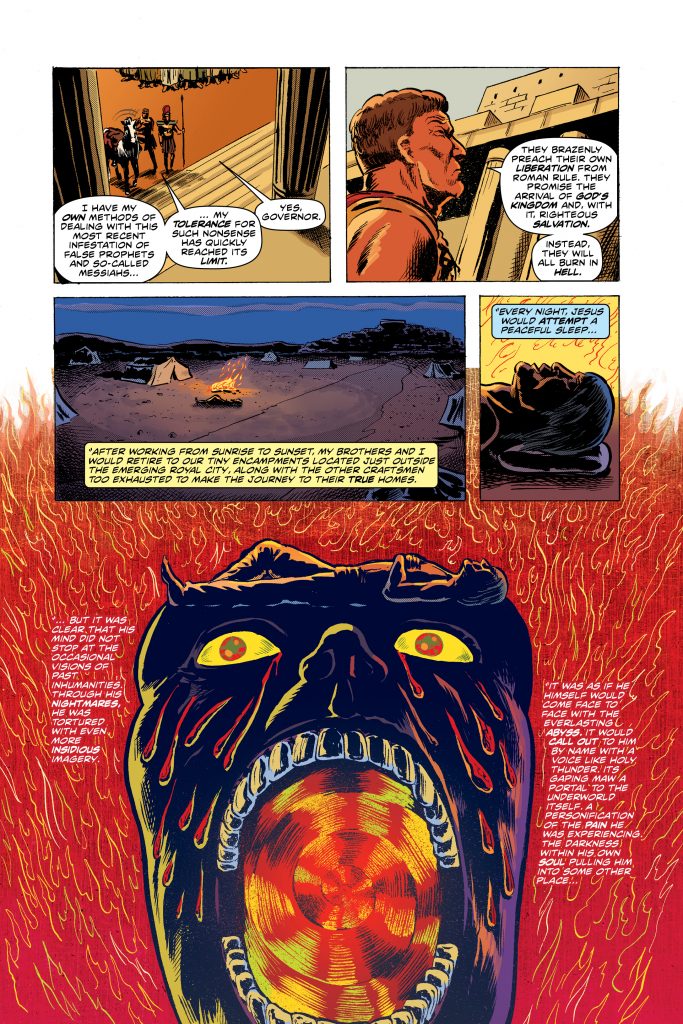 FS: The art has a grit and realism to it that reminds me of older Bible-themed picture books I read when I was younger. It works incredibly well. What was the collaboration process like with the rest of the creative team?

JC: On the art side, the collaboration between myself, Benjamin Marra and colorist Brad Simpson was very close. We all had certain goals we wanted to hit when it came to the visual look of things, and I think we achieved most of them. I worked especially close with Brad when it came to coloring the various characters, and making sure they were ethnically appropriate. In other words, no Caucasians in this book.

FS: I love the pulp feel of both the writing and the art. Were there any specific influences that impacted how you approached the book?

JC: The 1970’s exploitation comics were the main source of inspiration here. Marra and I wanted to employ the same kinds of storytelling techniques in our book that you might find, say, in any random issue of Marvel’s Master of Kung Fu. There was a density and a stylistic aesthetic to those comics that we deliberately brought to the forefront. We love those old comics and this book is, in part, our tribute to them. 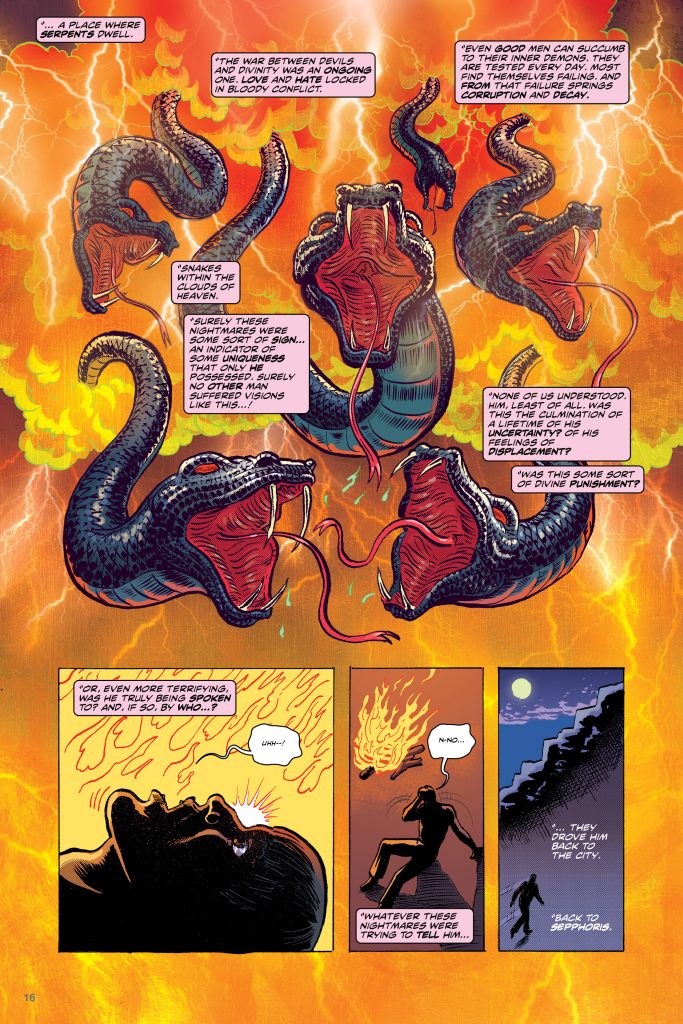 FS: You’ve said that you wanted to explore the tension that exists between the mythical depiction and the historical depiction of Jesus. What made you want to delve into that tension?

JC: I’ve written a lot of superheroes in my career. From Superman to the X-Men to the Avengers and more. Modern superheroes are often referred to as “modern mythology”, and I suppose I believe that to a certain extent. I’m also a big believer in Joseph Campbell’s notion of repeating mythical motifs throughout history. The fact that Jesus’ journey could be seen as the so-called “Hero’s Journey” was interesting to me. Our book is very much an origin story, which is a staple of superhero comics. But unlike Superman, there’s a real debate going as to whether or not Jesus actually existed. It’s not our intention to answer that question one way or another, but that fact that there are multiple viewpoints about who Jesus was made telling this story a certain type of challenge that, as a writer, I was pretty excited about.

FS: You inject so many details from biblical lore—the struggle with the serpent, the spear in Jesus’ side—that make the story feel rich. How did you decide which portions to use?

JC: Those images fall into the area of mythical motifs that apply to stories across all cultures. Which ones to employ were simply a natural outgrowth of the story we’re telling. 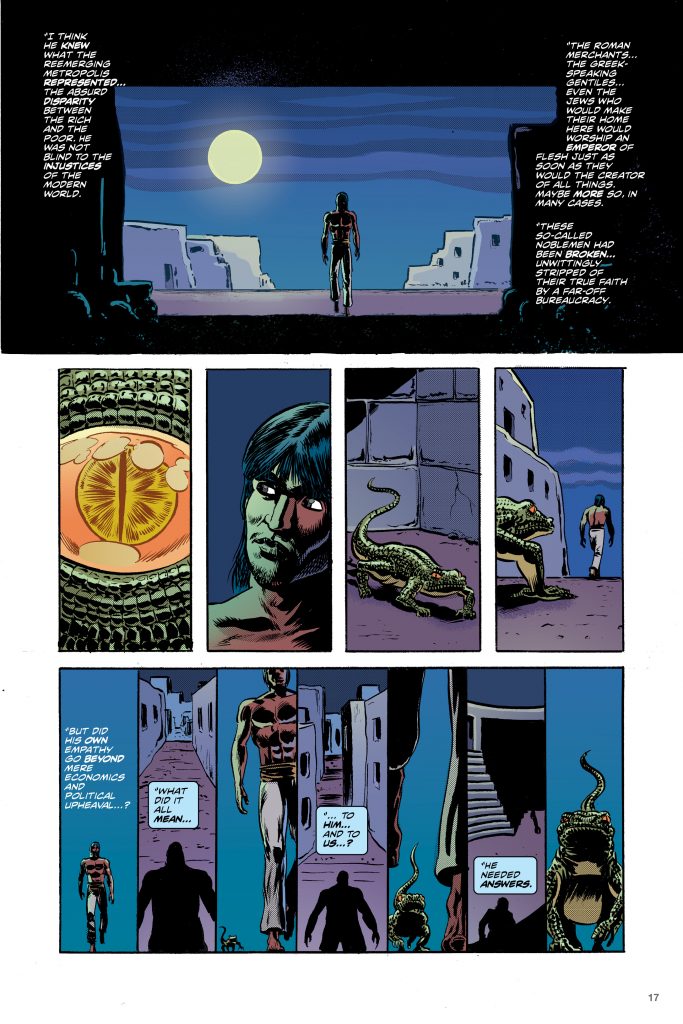 FS: Besides being entertained, is there anything you would like readers to take away from reading Jesusfreak?

JC: Entertaining the reader is first and foremost. There’s really nothing much after that. I guess we hope that real comic book history buffs will recognize and appreciate the arena that we’ve chosen to work in, that they’ll understand the influences we’re mining. Other than that, it’s just another example that comic books, graphic novels, whatever you want to call them… are, in fact, the greatest storytelling medium there is. Not to mention, you can tell any kind of story, not just capes and spandex-wearing superheroes. 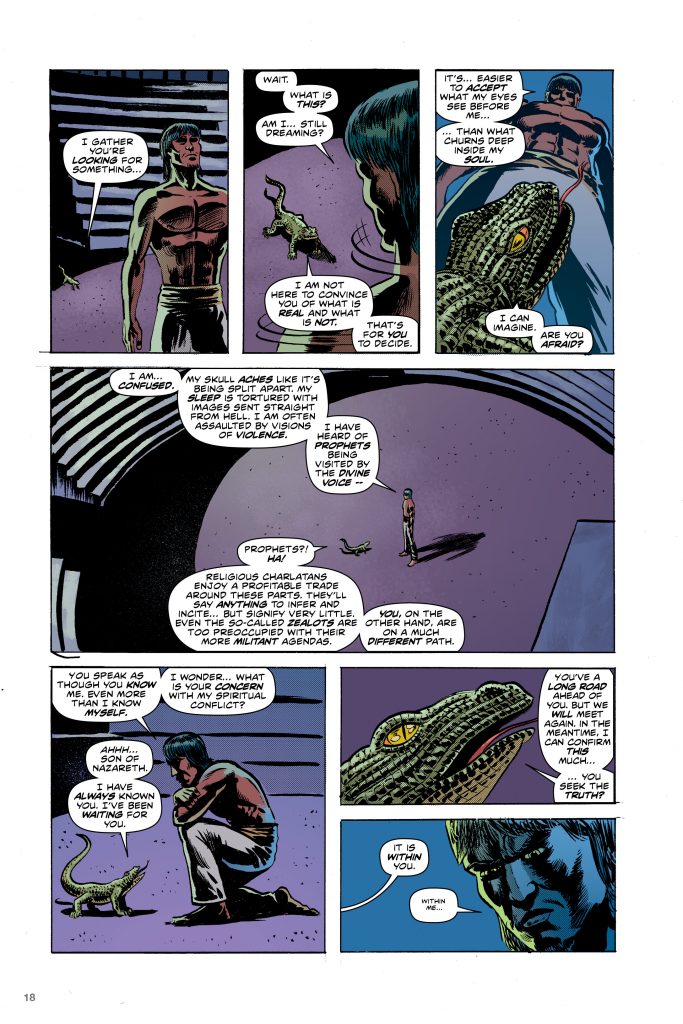 FS: Do you have plans for a follow-up?

JC: We’re still catching our breath from this one, but I never say never.

Jesusfreak is on sale now from Image Comics.

The year is 26 C.E. A young Nazarean carpenter is having some trouble adjusting to the violent world around him—and finding his place within it. He knows he’s different, but he doesn’t know why. Not yet, anyway. A bloody, two-fisted tale of historical heroic fiction brought to you by JOE CASEY (SEX, BUTCHER BAKER, THE RIGHTEOUS MAKER, MCMLXXV) and BENJAMIN MARRA (Night Business, Terror Assaulter: O.M.W.O.T.).