Last year, IDW’s Revolution story brought all of its Hasbro properties under one umbrella, with characters like Rom, the Transformers, and the Micronauts all living in the same universe. 2017 kicked off Revolutionaries, bringing individual characters from Transformers, G.I. Joe, and more together to investigate a secret that might unravel the universe itself.

Next week sees the fifth issue of the series hitting newsstands. Back in March, I spoke with series writer John Barber and artist Fico Ossio about the origin of Revolutionaries, how the various characters from the team interact with one another, and the collaboration process between the artist and writer. 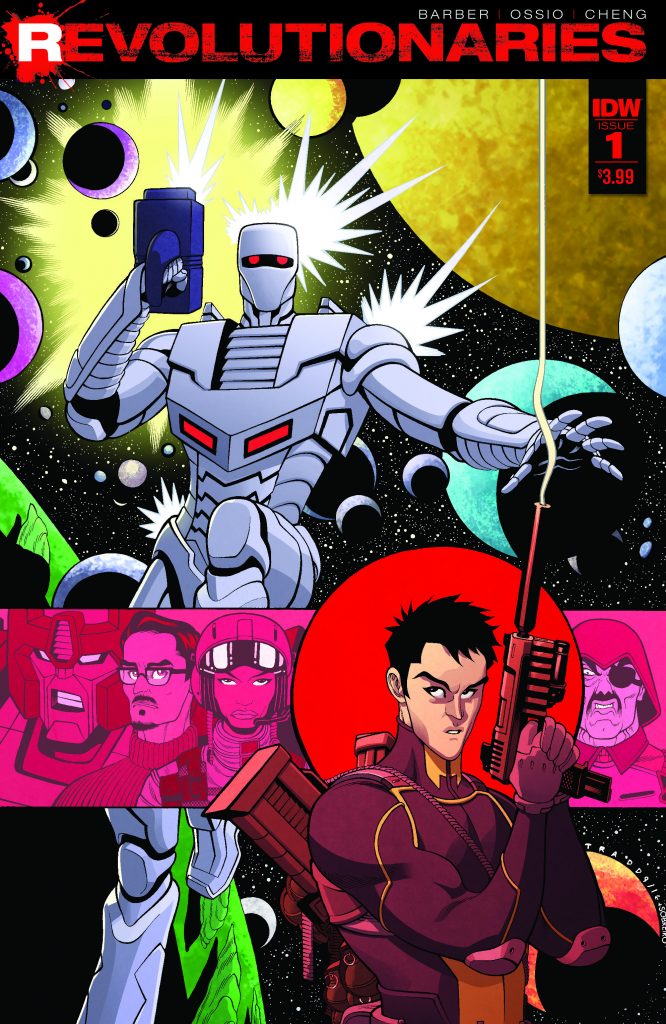 FreakSugar: For folks picking up the book, how would describe the conceit of Revolutionaries?

John Barber: Earth is home now to Transformers, Micronauts, Rom, and who knows what other creatures. So humanity, in the form of groups like G.I. Joe, M.A.S.K. – Mobile Armored Strike Kommand, and the Action Man Programme, is just coming to grips with this reality. The Revolutionaries are a group made up of humans and Cybertronians who come together to investigate a weird ancient device called the Talisman, which has ties to all of the various alien species that have come to Earth. And as the Revolutionaries start looking into things, they learn some really reality-shaking secrets about themselves and the universe. 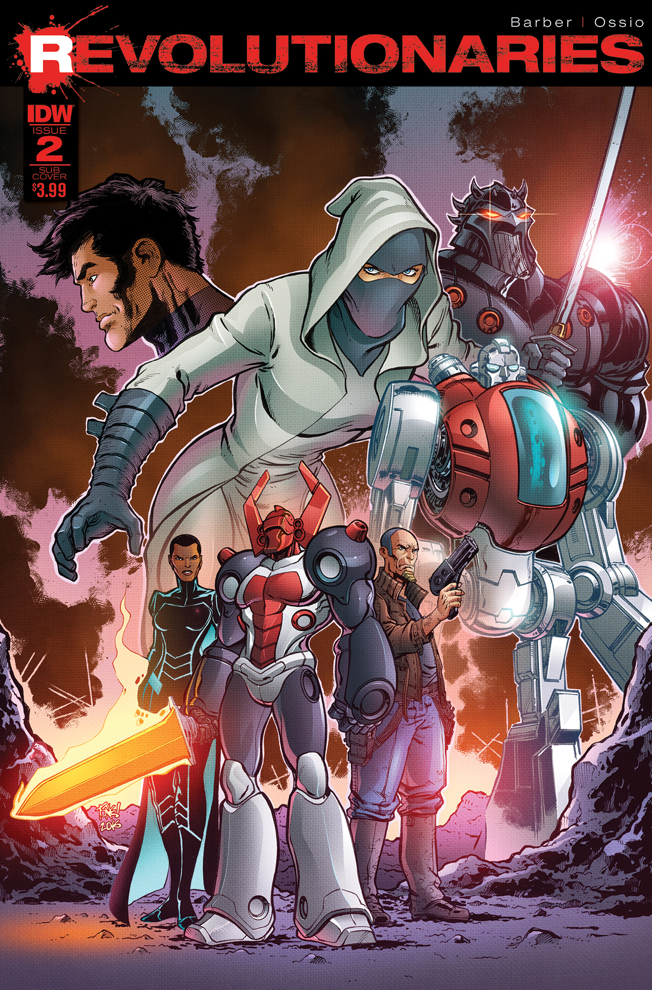 JB: There were a few things that came together at once. One was that the Action Man series I did with Paolo Villanelli and John-Paul Bove was really fun to write, and even though we always knew it was a limited series, I really didn’t want to stop doing it. So I was itching to keep Action Man going somewhere. A second thing was now-IDW Editor-In-Chief David Hedgecock wanted to have something additive coming out of Revolution, like a team book you couldn’t have done before. And one of us, I can’t really remember which, thought Revolutionaries was a good title. So there was, like, artistic interest on my part and general commercial interest from David.

When we did the writers’ retreat before Revolution, Cullen Bunn (who was co-writing Revolution) suggested it might be good to have Action Man looking over what everybody else was doing—monitoring everybody worldwide.

The other big piece was that I really wanted to keep working with Fico and Sebastian. I think the feeling is mutual—Fico and I hit it off pretty well, and I think the results are something really special.

Fico Ossio: For me it was quite simple. I just wanted to keep working with John and Seba. And that opportunity came very soon, beginning with midway through Revolution issue 2. Which was great because we got a chance to talk about it with John and David at SDCC. We had a great time there and all the while working on Revolution so, working with the team on something that came as a direct result of Revolution was a no brainer. Plus I was very excited after reading the pitch. 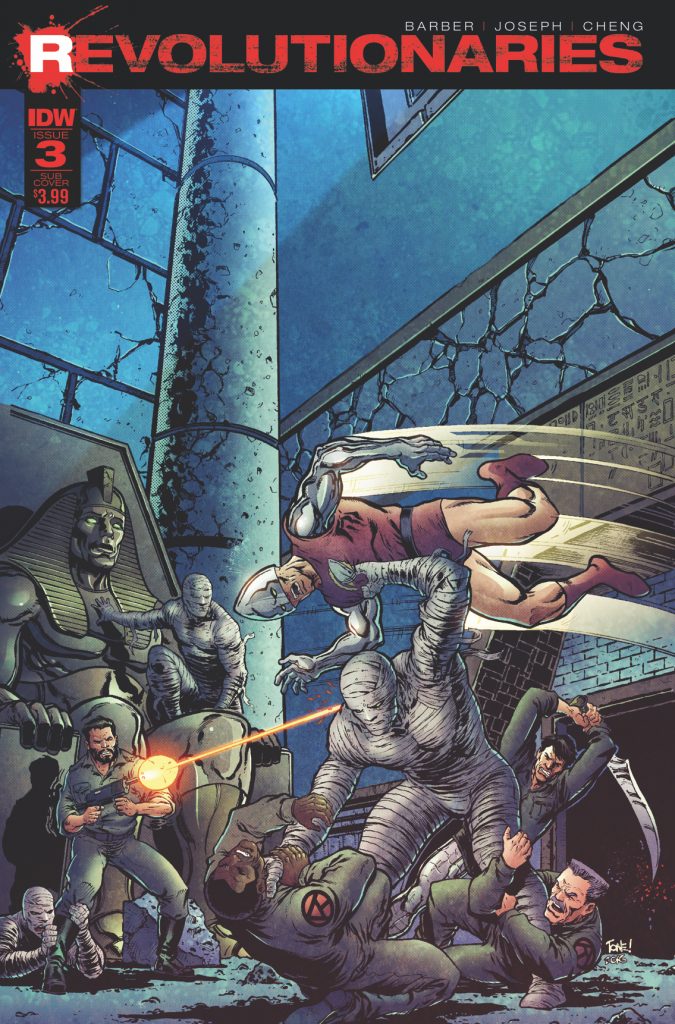 FS: Blackrock, Kup, Mayday, and Action Man are the stars of the show. What is it about this particular group of characters that make them the right fit and combination for a tale like this?

JB: Action Man was a given; that was kind of the origin, like I said. Blackrock came to mind right away—he’s a CEO of a tech company called Onyx who recently learned he was a Cybertronian sleeper agent. He was coming out of the Titans Return story in Transformers with an interesting set-up, and he conveniently happened to be a human-sized Cybertronian, which was nice to have. And the idea that he can switch from human to Cybertronian mode suggested a little more of a super-heroic take on the character, which gave us something unique.

We knew we wanted to have a G.I. Joe component, but we wanted to avoid getting in the way of  what Aubrey Sitterson and Giannis Milogiannis are doing in G.I. Joe, or the Joe team in Optimus Prime by Kei Zama and me. Agent Ayana Jones was going to move into G.I. Joe during Revolution—we had her in that series to show some continuity with the former Earth Defense Command from Transformers. When Andrew Griffith and I introduced her, she was just a background character, but she grew to be really important to both of us. I wanted to really be able to get into her character, and Revolution seemed like a good place. Blackrock, Action Man, and Kup all were long-existing characters, but being able to add to the tapestry was appealing.

Kup was actually the last addition—I thought he was going to wind up in a different book, but it came to be clear he didn’t really fit in with the series’ plans, at least for the time being. I realized having Kup around gave the Revolutionaries exactly what they needed to really gel—an old warrior surrounded by young heroes (well, Blackrock’s not young, but he’s only known what he was for a couple months).

FO: I think the characters that John picked are great. It’s an interesting group of lesser known characters so they all have a lot to build on. And the dynamics between them work perfectly. And I got the chance to update their original designs to make them look the part of main characters too. Well, except Action Man, who’s already had his own lead title. He’s the diva of the group obviously. 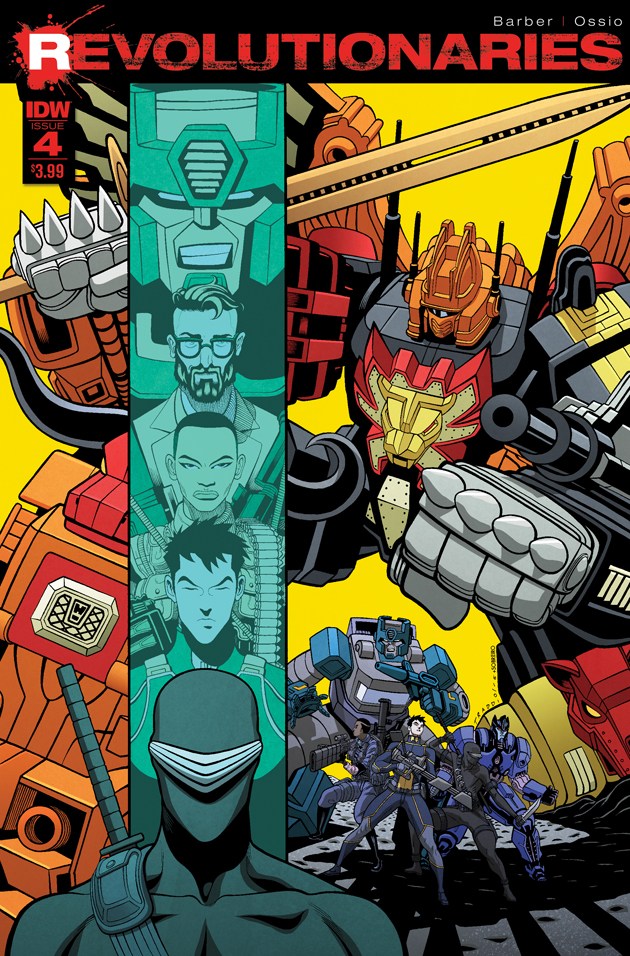 FS: How does what’s happening in Revolutionaries connect to the larger IDW/Hasbro world that came out of “Revolution”?

JB: There’s a really big thing—I can’t spoil it, but there’s a very direct connection between how this search for the Talisman plays out and how everything is going to work for Earth going forward in the next year. I’ve probably said too much already!

There’s also the whole idea of exploring the history of the world; there’s at least one big secret that’s happened in the past that’s big enough to impact everybody that goes near it… which sounds horribly vague. But it’s already there in the comics, if you want to make a big logical leap…

Plus there’s really concrete, instant stuff: we saw the Red Shadow Ninjas in G.I. Joe #1—what was their deal? What were they after? Why did they have those powers? See Revolutionaries #2. And the Talisman shows up in the Micronauts Annual, which informs what the Micronauts do in that same issue.

FS: Fico, there are a lot of moving parts in Revolutionaries, with different sized characters interacting with one another on a grand scale. What’s the process like for planning out action scenes for a book like this? (You’ve done it very well, by the way!)

FO: Thanks! Well… I’m starting to get comfortable with it now after surviving Revolution. Usually I try to focus on what’s the most important thing that happens on each page. And what’s the tone that the page should have. Then I figure out which panel works best to deliver that in the most interesting way. That would be the basis for the whole page. And from there you build the rest of it, the angles, motions… and never forget room for text! It does get crazy sometimes… more like 1 out of 2 pages. [laughs] But I love it, and I enjoy these challenges John throws at me with his scripts and I try my best to do them justice. 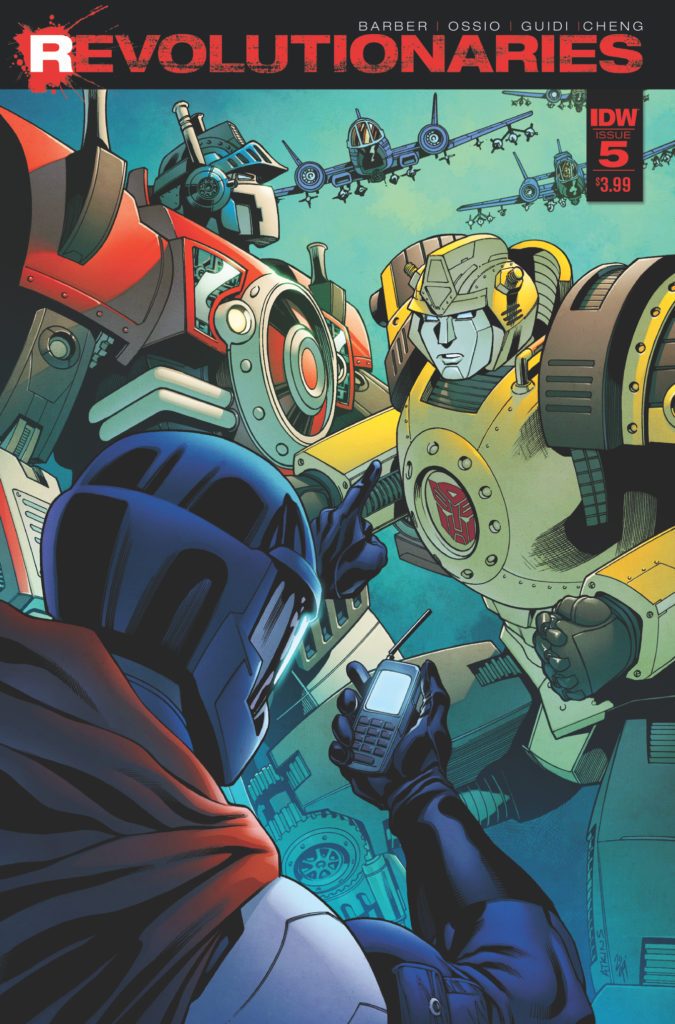 FS: Is there any particular pairing of characters in the debut arc that you especially enjoying having interact with one another?

JB: For me, it’s Kup and Action Man. They’re a team, after the Action Man: Revolution one-shot, and they’re both smart and funny, but really doofy and corny at the same time. They’re fun to bounce off each other. Action Man is happy to have a robot friend and Kup loves that somebody thinks he’s cool.

FO: HA! I was gonna go for a different pairing but now you make me second guess… OK, that’s a great one. Plus Action Man is always fun and has the best interactions with the rest of the group.

I also love Mayday and Blackrock paired up. They kind of get on each other´s nerves… and Blackrock sort of freaks her out. I find that very funny.

FS: John, these characters all come with broad, wide-ranging histories. How much of those histories do you plan to be drawing upon as you craft your stories for Revolutionaries?

JB: Not so much that you drown in it, but enough to be interesting. If you’ve been following the main characters through Transformers, Revolution, Titans Return, or Action Man, what they do here I think grows from who they are, and where they were in the past. Action Man’s relationship with Doctor X; Mayday getting a chance to be the leader; Kup’s history of being trapped alone for an incredibly long time; and Blackrock’s mysterious origin as a Cybertronian sleeper and a Titan Master—in every case, those are the things that drive them forward and make them dig in to the mystery.

For the guest stars, there’s a lot of stuff to play with—we’ll flash back and see what happened to G.I. Joe between the end of the last series and the beginning of Revolution; we’ll see previous Action Men; we’ll see Soundwave when he first landed on Earth; and we’ll see lots of Easter Eggs and bigger pieces built from the histories of the Micronauts and Rom and M.A.S.K. and everybody. Again, you don’t need to know this stuff to read the comic, but maybe you’ll be intrigued enough to check some of it out.

FS: With such a broad cast of characters in this new shared universe at your disposal now, will there be other team-ups and character combinations we can expect to pop up in Revolutionaries?

JB: Sure—issue 2 is the new female Storm Shadow versus the Micronauts; 3 is a flashback to Joe Colton—the original G.I. Joe—and his Adventure Team meeting the Decepticon, Soundwave; #4 is Snake Eyes versus the Predacons… and it gets wackier. There are some surprises nobody will see coming.

FO: Yeah, that’s one of the best parts of Revolutionaries.

FS: You two have collaborated together before. At this point, have you developed a shorthand when working with one another?

JB: JB: We kinda started out with that… when Cullen and I plotted Revolution #1, we were really bare-bones. Too bare-bones, because we realized Fico was having to do too much puzzling out who was where. Fico nailed it, of course; it was just a little unfair. But we kept things pretty open even later.

That carried over to Revolutionaries—we do this comic plot-first, so Fico draws off my written description of the events, maybe with little notes about the gist of who’s saying what. But I write the actual dialog afterward.

It’s not that I know what Fico will do—he always surprises me. But the surprises are always better than what I imagined, so I’ve gotten used to expecting that.

FO: It really all went super smooth from the get go. Working from plot really made it better for me to fit all the characters in the page and was used to working like that with Ron Marz and David with Skylanders. So I really like working that way. Revolution went great, I felt super comfortable working with John and Cullen that way. He´s open to ideas and we all work as a team which is fantastic. Plus I always send pencils first so if I mess up there´s always a chance to fix it! Which is unlikely cause I got this Micronaut spy lurking over John. But shhh…

Revolutionaries #5, written by John Barber with Fico Ossio on art, is on sale Wednesday, June 14th, from IDW.

From the official description of Revolutionaries #5:

The Revolutionaries are after Cobra Commander, but he has some help from the past—the Hearts of Steel Transformers?!?