Artist Jon Davis-Hunt knows quite a bit about taking Big Ideas and interpreting them on the page, while adding his own indelible mark on the stories he helps create. From his work on the delightfully creepy Clean Room with writer Gail Simone to his current work on the bigger-than-life The Wild Storm #7 with writer Warren Ellis, Davis-Hunt always brings clean, crisp linework to the table, both grounding and elevating the breakneck action and chaos.

The Wild Storm #7, the beginning of Chapter 2 of Ellis and Davis-Hunt’s reimagining of the WildStorm comics line of books, hits stores today, with more thought-provoking turns and revelations a’plenty. Mr. Davis-Hunt spoke to me recently about how he became involved with The Wild Storm, reinterpreting the iconic WildStorm characters for this new series, and working with Mr. Ellis to bring those characters to the “real” world.

FreakSugar: First of all, I was a huge fan of your work on Clean Room and I’m loving The Wild Storm. Thanks so much for speaking with me!

Jon Davis-Hunt: Thanks so much! Absolutely no problem.

FS: For folks who might not be familiar with the title, how would you describe The Wild Storm?

JDH: Well, it’s essentially a contemporary re-imagining of the original WildStorm – all the big, crazy and exciting ideas of the Wildstorm Universe, done in the “real” world of today. It basically takes all of the original high-level concepts and characters, blows them up and sticks them back together again using a big tube of spy thriller super-glue. 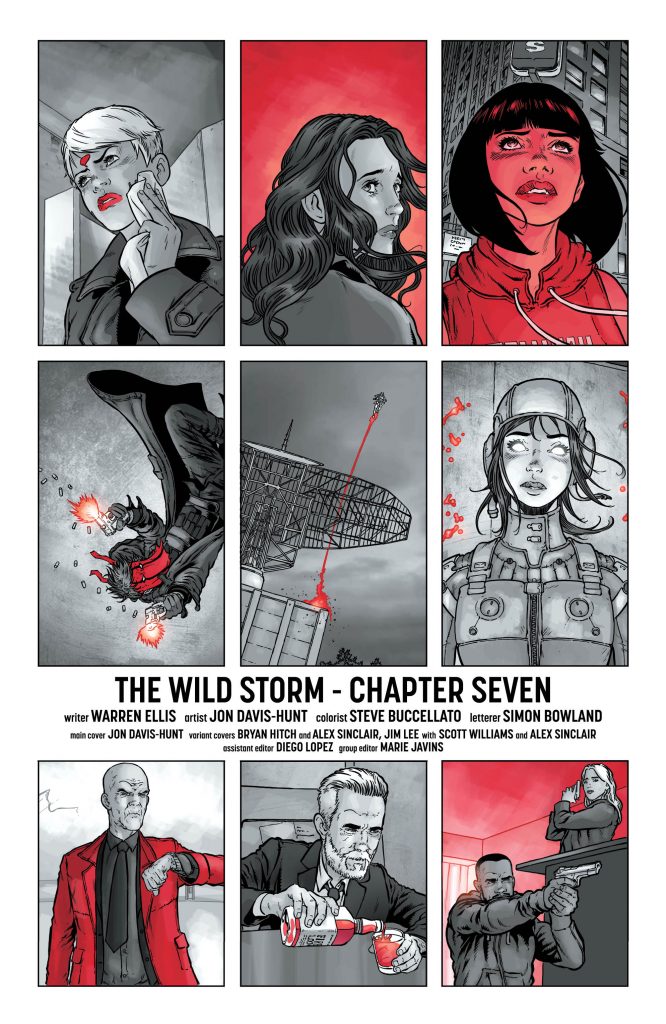 FS: How did the title come to life? What’s the genesis between your collaboration with Warren Ellis?

JDH: I was on holiday last year, when I got an email from (my now editor) Marie, basically asking if I would be interested in working on a re-imagining of the Wild Storm universe, with Warren writing. It was literally a dream offer and undoubtedly, the most surreal email I have ever had

Warren had apparently been looking for an artist that he thought would suit the format of the script and the tone of the book and Kieron Gillen (who I cannot thank enough and will someday thank personally) passed on my name as he’d seen my work on Clean Room. Anyway, I jumped at the chance and then worked on a number of character designs, based on descriptions Warren sent through. I did several revisions and once Warren was happy, I jumped on-board and we were off! 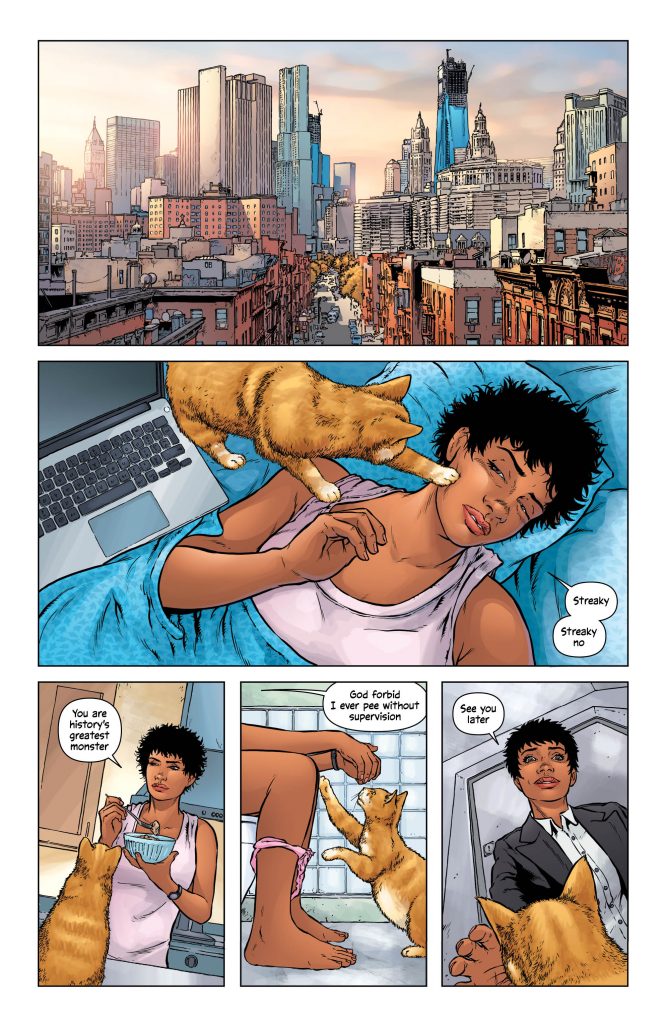 FS: Were you a reader of any of the WildStorm titles back in the 1990s onward? Given what you and Warren are doing on the series—moving away from costumes and relying more on functionality—how heavily do you draw on those early books in the design process?

JDH: Yeah, I absolutely loved Wildstorm. The Authority and Planetary are two of my favorite books of all time. I’d also been a big fan of WildC.A.T.s, right from Jim’s initial run, through to when Travis Charest took over.

Right from the start though, Warren made it clear that he wanted this book to be the exact polar opposite from the 90’s and 00’s books. As you mention, costumes were out – functional contemporary clothing was in, so I basically, took his initial descriptions and then ran with them. I’ve tried to kind of filter the characters through a contemporary lens, but still retain certain elements of their original costumes here and there. I work closely with my wife on the design side of things and often, we will talk through not only how a character looks, but why they look a certain way. Where would they get these clothes from? How would they wear them? It’s tricky as you want them to appear ‘real’ but also stand out, and then at the same time, you want to avoid an out and out costume. Warren always supplies a decent starting description and then I’ll work on designs and submit something, once I feel like I’ve nailed down his initial vision. Initially, I revisited characters several times, but as the book has developed and taken shape, I think we’re building up a broader ‘style’ which means I get closer to a character design first time (or at least, I recognize the designs that aren’t working and I don’t bother sending them in). 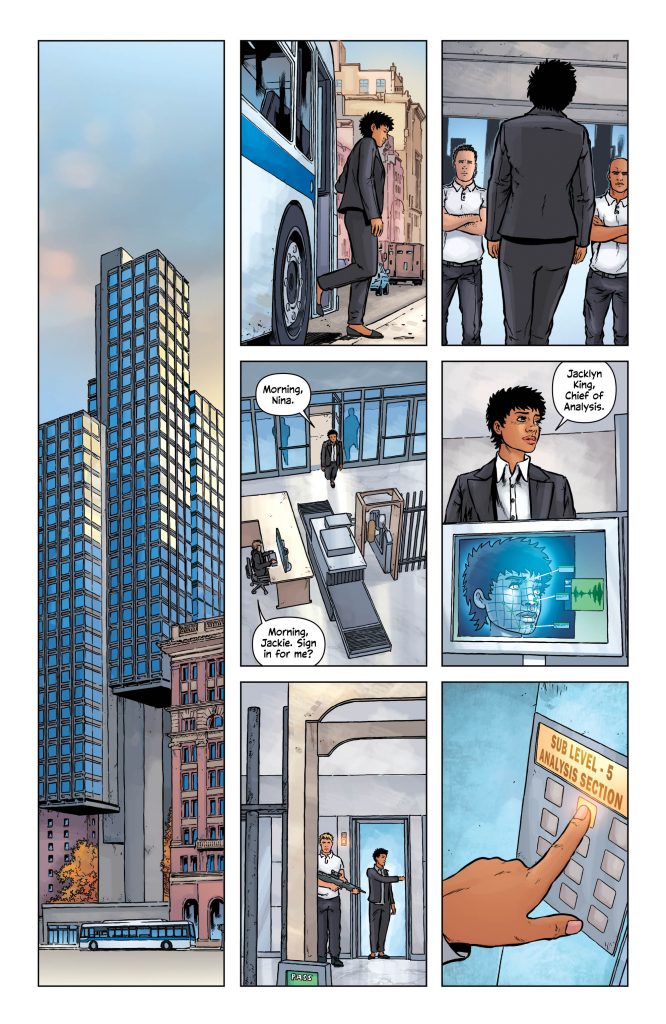 FS: Given your background at DC and Warren’s work on past WildStorm titles prior to this relaunch, what kind of sensibilities do you both bring to the table? What is your collaboration process like with Warren?

JDH: Warren provided a really clear outline for the series the moment I came on-board, so that helped us get on the same page. He has always had a really clear idea of what the book should be and I totally agreed with him. His basic intent was to do the opposite of what he had done before and I think, as a fan of the original universe, I immediately found hat idea really intriguing and exciting. Warren’s scripts are really detailed, and I get them well before I’m due to start drawing them. That gives me plenty of time to read through and design any new characters/elements/environments. If anything isn’t clear, I’ll double check with Warren, but that’s really rare, pretty much everything I need is there in the script. Warren is great to work with. He’s super busy, but he’s always available to run things past. He’ll sometimes check with me too, if I’m okay to draw certain things, but to be honest, it’s been so much fun drawing this book, I’m always like “Yeah sure – bring it on!” 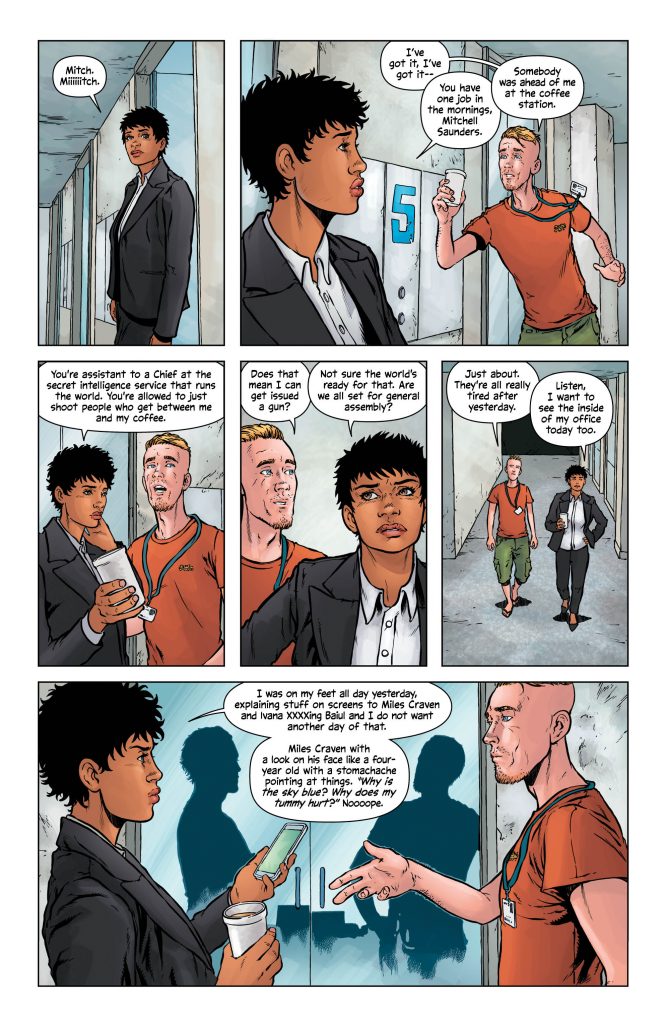 FS: To me, the page layouts that you and Warren are using—with six- and nine-grids—intensify the action and bring an urgency to the stories. Am I misreading that? What do you think that sensibility adds to the overall tale you two are telling?

JDH: Yeah I think you’re right. I think that urgency also comes down to the way we really squash time in our action sequences and in other areas of the book, so we can focus on specific moments. The grid structure has been really fun. I’ve not used it before, but it’s been a real challenge and a great experience. I think also, the way Warren has written certain moments, there is attention paid to the quiet moments before the action and I think that then heightens the tension so when things do kick off, the reader is in the right frame of mind. Its the calm before the storm and it helps give the book a cinematic quality. 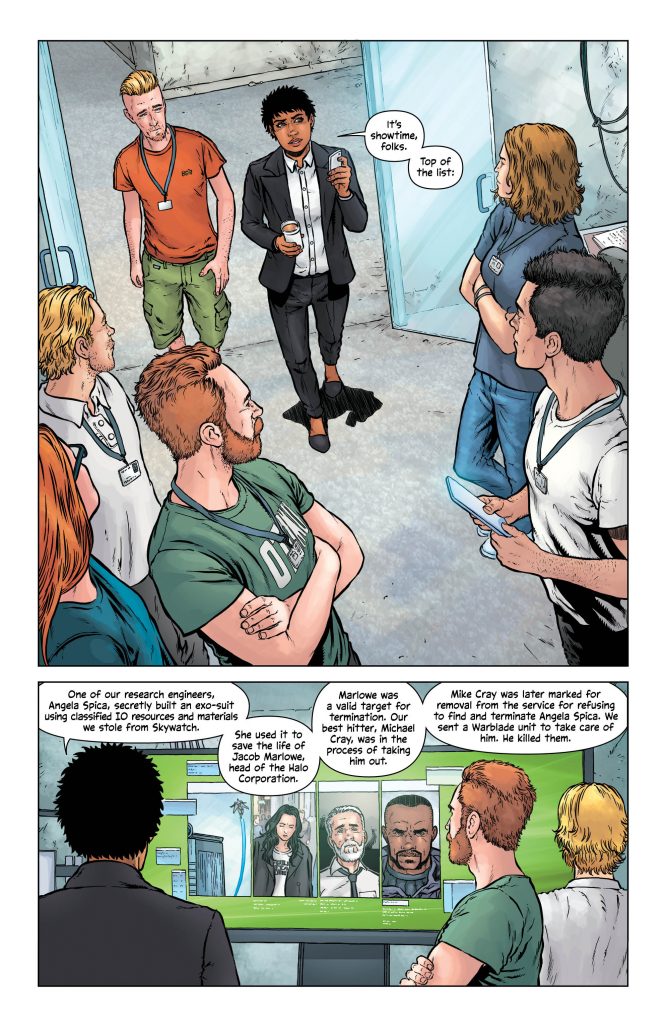 FS: Your work is always so easy on the eyes; your designs are so clean and crisp, from your work on Clean Room to The Wild Storm. Is there a particular approach you’re taking with the characters and locales in The Wild Storm that’s different than from other books you’ve worked on?

JDH: Thanks so much. I’m trying to keep the book very grounded, so I’ve tried to use angles that are often used in film and TV and also, do a lot of research when it comes to specific locations, so that everything feels very “real.” I’ve also spent a lot more time on this book planning out interior locations, so that when there is an action sequence, the fallout from that has an accurate effect on the surroundings. I did that especially for the big fights in issues 3 and 6.

I also need to give a HUGE shout out to the incredible Steve Buccellato who colors the book. His colours are incredible. Not only does he do an incredible job of making my inks look great, he’s a huge part of getting the feel of the book right, with his great use of lighting and mood. It really helps realize the look and tone of the book. And his skies!!!! I cannot get enough of his skies. 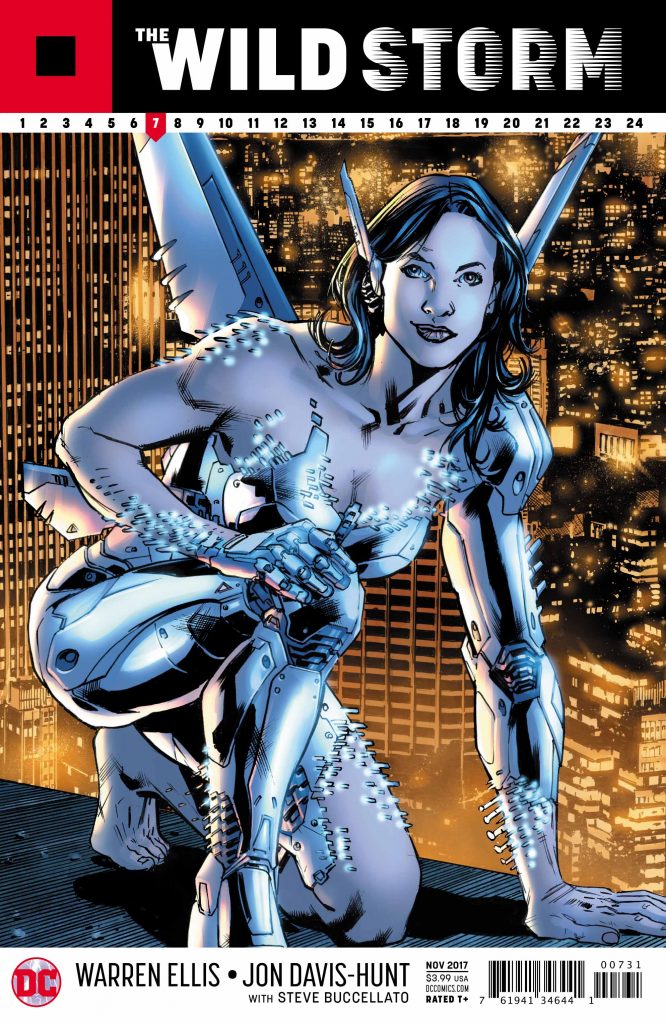 FS: Following up on that, are there any characters that you weren’t sure at first blush how tackle where you had an “A-ha!” moment and everything clicked into place?

JDH: Definitely Adri. My first attempt at her was just completely wrong – I basically had her in this big, bulky space suit and it just looked wrong. I did several designs until finally, I simply removed the outer suit, so she had a more streamlined form and suddenly she just clicked.

The Engineer’s flight suit also took a LOT of revision and work, but again, I finally got there with her too. It’s weird how some characters take ages, whereas others (like Grifter) just work first try.

JDH: The first arc was definitely about the idea that the world is “normal,” but there could be some strange, weird things going on underneath the surface. It’s like noticing tiny ripples on the surface of a still pond. In Book 2, we chuck a great big rock into the pond. The second arc is all about confirming that strangeness in a big way. At the start of Book 2, we get to see our main group of “good guys” coming together and then, it all starts to go crazy. 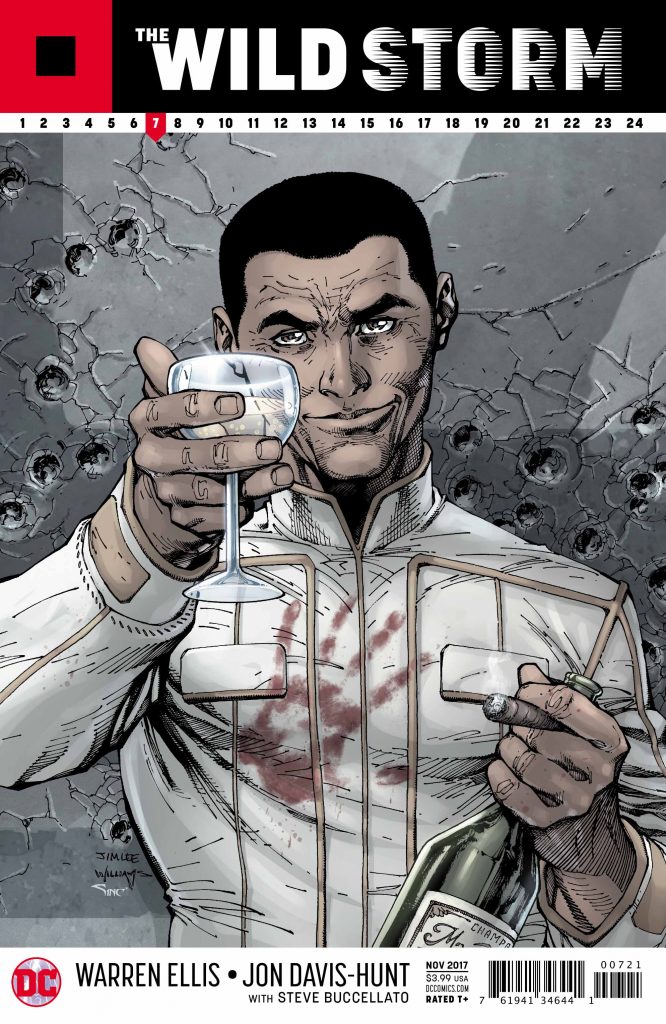 FS: You seem to be having a great time drawing the book. Are there any new designs in Book 2 that you’re particularly jazzed for us to see?

JDH: I am having an absolute blast drawing this book. It really is the most fun! I can’t give too much away, but an important character (from past WildStorm) makes a return in issue 8 and I’m really pleased with how their design has turned out.

FS: Is there anything you can tease about what we can expect moving forward?

JDH: I really can’t say anything. Other than I think Book 2 will surprise people even more than Book 1!

The Wild Storm #7, written by Warren Ellis with Jon Davis-Hunt on art, is on sale now from DC Comics.

Jackie King, chief analyst at I.O., tries to make sense of all the pieces scattered across the board since Angela Spica saved Jacob Marlowe’s life. Angela Spica wakes up at Jacob Marlowe’s safe house and starts to realize how far from real life she’s been thrown since then. But life is not slowing down, and Marlowe’s wild covert action team have to extract the last member of their number from an I.O. black site. Meet John Colt—moments before he’s either rescued or murdered or dissected to reveal a secret kept for thousands of years.