It’s hard to remember a time when Barbara Gordon, Huntress, and Black Canary weren’t flying high and kicking tail as DC Comics’ Birds of Prey. Whether as Oracle or Batgirl, Barbara has been guiding the team on a number of adventures, with the lineup expanding and contracting along the way. Writers Julie Benson and Shawna Benson are playing with the Birds’ ever-altering roster in Batgirl and the Birds of Prey‘s newest story arc “Manslaugter,” which kicked off this week. With the males of Gotham City succumbing to a mysterious ailment, the city’s female heroes and villains alike are uniting to deduce the source of the sickness.

Ms. Benson and Ms. Benson spoke with me recently about writing Batgirl and the Birds of Prey, creating a Birds of Prey superteam for “Manslaughter,” and what we can expect next in the arc. 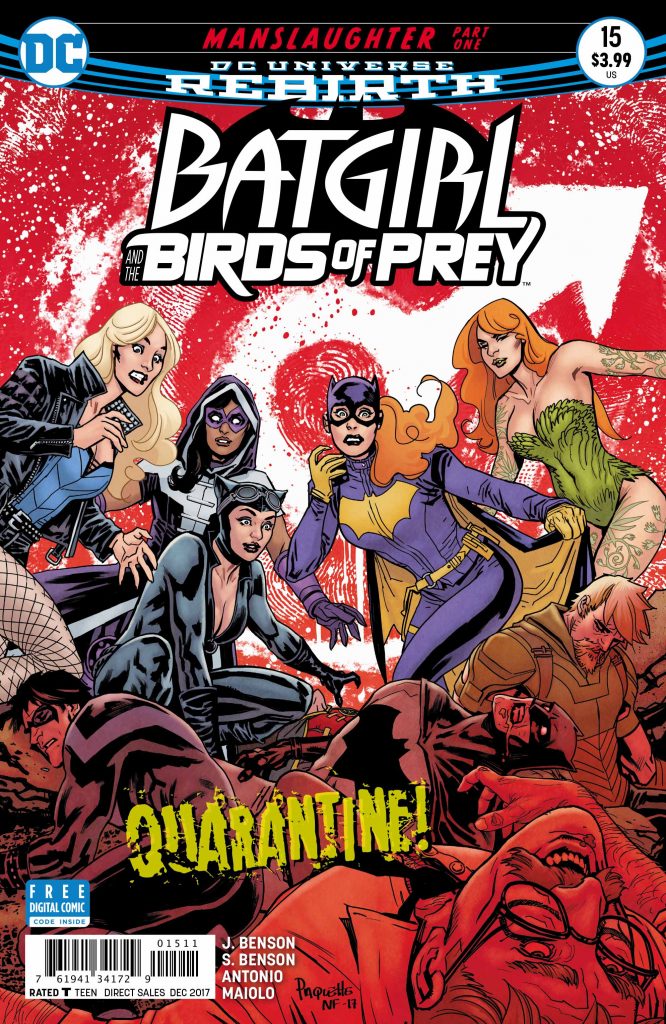 BATGIRL AND THE BIRDS OF PREY #15 cover

FreakSugar: First of all, thank you so much for agreeing to the interview. I’m really enjoying the book!

Julie Benson & Shawna Benson: So happy to hear that! Thank you for reading and sharing their adventures with us!

FS: For folks who might be picking up the book, where do we find the Birds of Prey at the beginning of this newest arc, “Manslaughter”?

JB & SB: The Birds of Prey are a pretty tight team now. They’ve developed a rhythm working together and even more importantly, they LIKE each other. They’re friends. Family. The question now remains how do they play with others? We’ve seen them able to work with Catwoman and Poison Ivy but now they will be challenged to work within a much larger team. A lot of strong women with strong opinions…

FS: In the first issue of the story, the men have been taken out of play by a mysterious disease. How did you land on that plot point for this tale? There seems to be so many avenues you can take—particularly the one we see at the issue’s end, which had me cheering.

JB & SB: It’s a story idea that we’ve had for a while. It’s a great way to bench the male characters and really put the spotlight on the women. So often the abilities and accomplishments of the women characters are either inadvertently or purposely downplayed for those of the male characters. With a story lacking any men to contribute, we eliminate that problem. And we wanted a story that would allow us to bring together a lot of women characters for an “ultimate team-up.” It’s unprecedented and well overdue to see this many female superheroes in one book fighting together. Of course, we jumped on that opportunity. 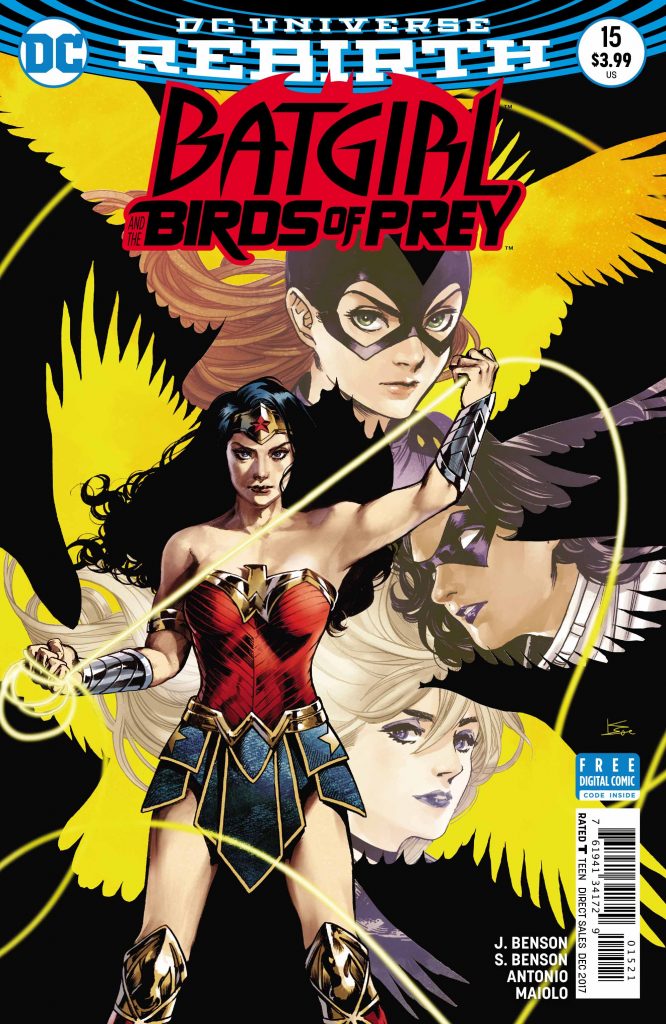 BATGIRL AND THE BIRDS OF PREY #15 variant cover

FS: I’m fascinated by stories that delve into science in some shape or form. Did you two do any research on disease and contamination prior to the start of the arc?

JB & SB: We love researching! We try to keep as close to the science as we possibly can, but when you are writing for a fictional world that doesn’t always adhere to our normal world rules, you have to allow for some creative license. It’s true that currently there’s no virus that can target a specific sex chromosome, but we wanted to explore the idea that if one would be created, how would that manifest.

FS: So many of the characters in BOP appear in their own books across the DCU. What’s the coordination process like, juggling where the heroes and villains in their own series while still advancing their character growth?

JB & SB: There are a lot of rules for some of these characters and some of them have, say, 75 years of history behind them. You have to find ways to bring forth what those characters are known for while maintaining the integrity of the story you’re telling. Fortunately for us, we didn’t have to sacrifice much, and usually a character’s traits work to our benefit. We appreciate that all of these characters have lives in other stories. It’s something we’ve been doing already for our main three ladies so applying that process to our guest stars was a natural extension. But it is challenging! 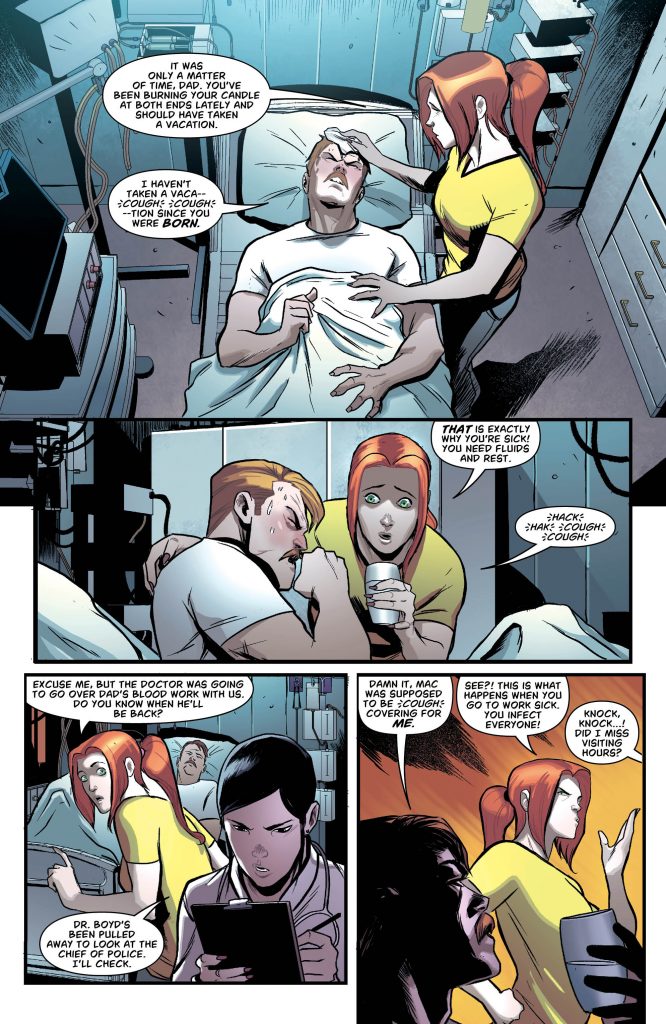 BATGIRL AND THE BIRDS OF PREY #14 page 1

FS: Reading the first issue of the arc and reflecting on your previous issues, this seems like a story that you’ve been building up to for quite some time. Have you always had your eyes on a Bird of Prey Superteam tale since you started on the series?

JB & SB: Yes! We’ve pitched other versions of a “Superteam” in the past, but we ran into challenges with where characters were in other books. We wanted Supergirl, Hawkgirl, Barda, Lady Blackhawk, you name it. We are greedy writers who wanted it all. But, we also felt that it was important to get our Birds of Prey team to a place where we’ve spent time with them and feel comfortable branching out beyond our core trio. The timing finally worked out and we managed to find a story that would allow us to build this team. It’s exciting to finally see it come to life. We asked a lot of Roge Antonio for these three issues. He has to carry a lot of work drawing all of these characters and he stepped up to the challenge. There are panels in these three issues that we think are his best work in Birds of Prey to date.

FS: Since starting the series, there seems to be a big focus on growth and change, respecting the past while looking toward the future. We see this quite a bit with Barbara: she has dabbled with taking the Oracle persona a bit in recent issues, but she is taking a strong leadership role as Batgirl in this arc. Is that fair assessment?

JB & SB: That feels right. Barbara will always be Oracle, but she’s also Batgirl. For us, it’s important to acknowledge all of her roles, and she has several. She’s an entrepreneur, a vigilante, a computer hacker, a librarian, a daughter… She is the one who brought the Birds together in Rebirth, so she is our team leader. To reinforce that, we had her affected first by the illness in Gotham by way of it infecting her father, Jim Gordon. That gives her personal stakes right from the start. Even Batwoman seems to follow Batgirl’s lead. She’s the boss. 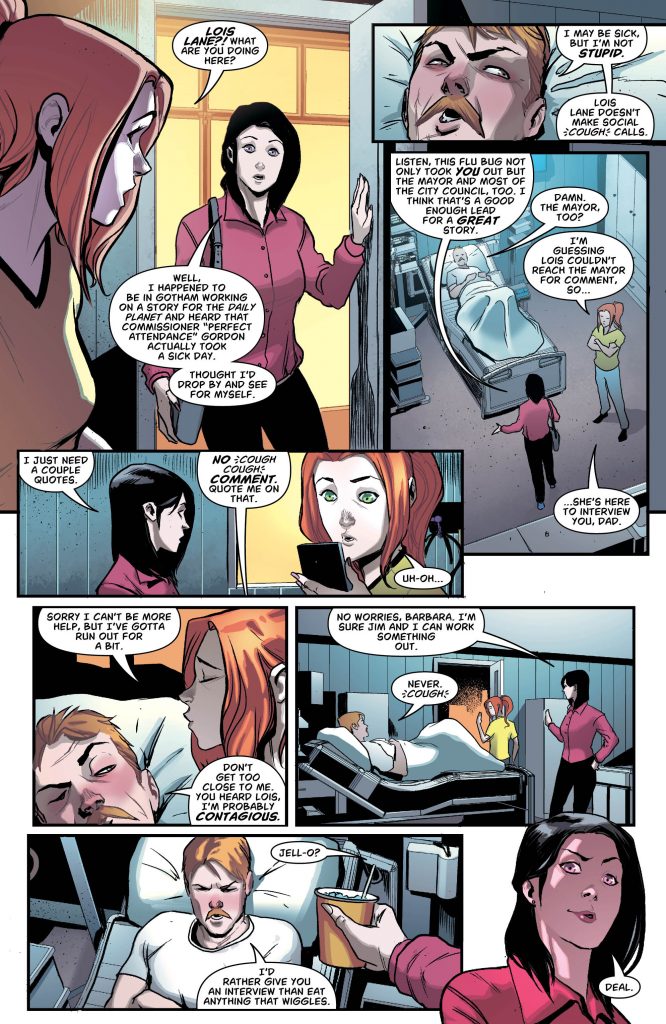 BATGIRL AND THE BIRDS OF PREY #15 page 2

FS: Following up on that, what kind of opportunities for growth are you looking toward for the Birds of Prey in “Manslaughter”?

JB & SB: For this arc, the Birds of Prey are challenged with working with a much larger group of heroes to solve the problem. It’s a lot of coordination and cooperation, sometimes with people they wouldn’t normally be working with. We hope that in telling this story, we’ve established that these characters can call on any of these guest stars at any time for anything they might face in the future.

FS: Is there anything about Manslaughter you can tease moving forward?

JB & SB: It’s going to take this entire team-up to solve this crisis in Gotham. And there are still a few guest stars we haven’t seen yet who play important roles in this story. Also, lots of badass women heroes being awesome. Also… a new female villain!

Batgirl and the Birds of Prey #15, part 1 of “Manslaughter,” written by Julie Benson and Shawna Benson with Roge Antonio on art, is on sale now from DC Comics.

“MANSLAUGHTER” part one! It’s flu season in Gotham City, but something odd is happening…only the men are getting sick, including those closest to the Birds of Prey! With Commissioner Gordon on his deathbed and Batman fighting a foe even he can’t beat, only the Birds of Prey have the strength to stand up to what’s happening and keep the city from spiraling into chaos!