With a Justice League film and a Mighty Morphin Power Rangers movie reboot both hitting theaters this year, it makes sense that DC, which publishes the Justice League comics, and BOOM! Studios, home to the Power Rangers series, would want build on the excitement of those movies, with the fans of both reaping the rewards.

To that end, this month, the first issue of the Justice League/Power Rangers miniseries hits newsstands, with DC’s mightiest heroes meeting the protectors of Angel Grove for the first time. I recently spoke with series writer Tom Taylor and artist Stephen Byrne about the genesis behind the story, what readers can expect to see in the coming issues, and how their priority is to give readers and bombast they expect from such a crossover. 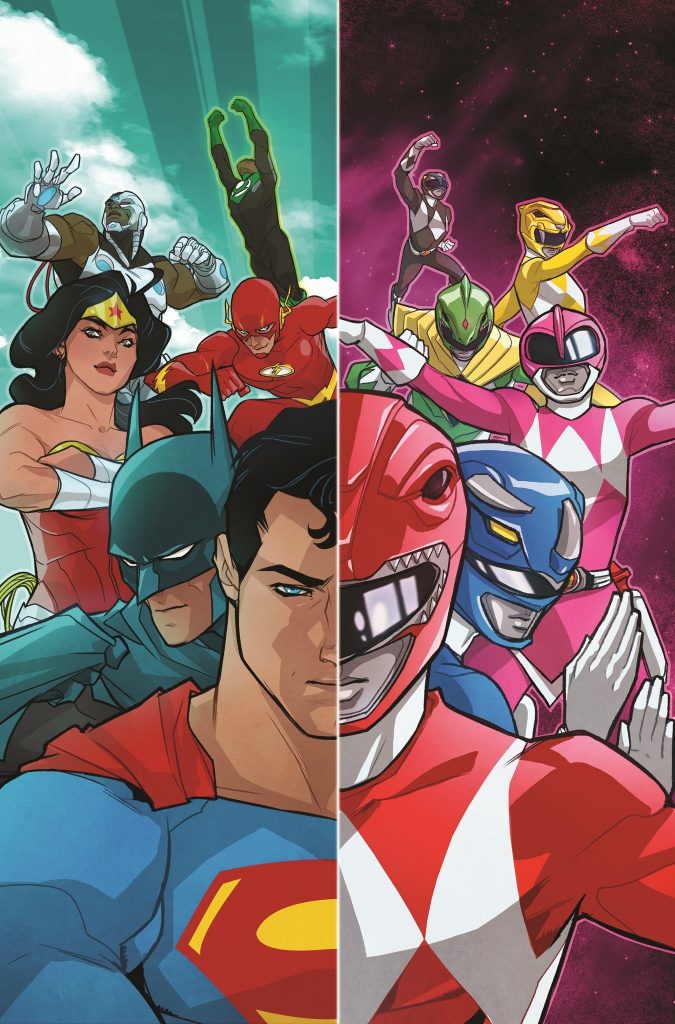 FreakSugar: The Justice League is a such powerhouse franchise and Power Rangers is experiencing a huge revival. Why was it time for these two franchises to finally come together?

So, I don’t think there’s been a time they’ve been in the social consciousness as they are right now. Superheroes and everything we grew up with are dominating the landscape. There’s never been a better time.

Stephen Byrne: And we’ve seen how exciting all those crossovers have been, like the Batman/Teenage Mutant Ninja Turtles crossover. So I think people are seeing the potential for things like this.

FS: What can you tell readers about the conceit of the crossover?

TT: I want you to come in expecting the Power Rangers take on the Justice League. They’re thrown in very, very quickly. Some big events happen which bring these unlikely heroes from two different worlds together in a way you wouldn’t expect. That dynamic and moment when Zack, the Black Power Ranger, meets Batman for the first time—I argue it’s worth the price of admission right there. 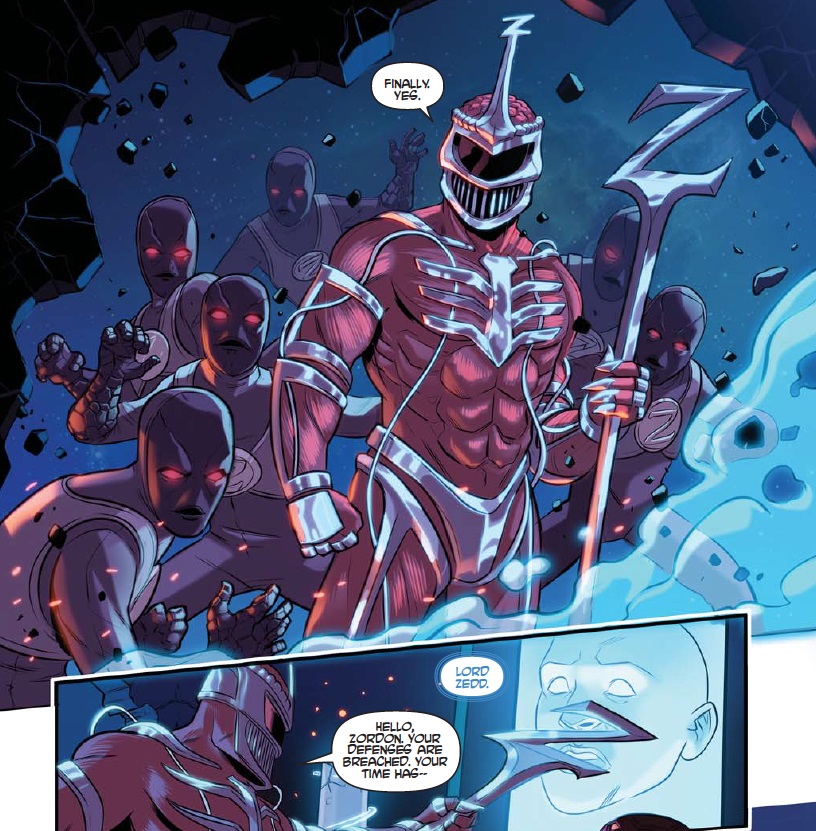 FS: What’s the collaboration process like between you two? The concept of the book is a lot of fun and it’s obvious you two are having a ball. Are there any moments that either of you definitely wanted to make certain were highlighted in the book, like, say, the Pink Ranger’s pterodactyl carrying off the Batmobile?

SB: I give all credit to Tom’s crazy, insane mind and all the things he comes up with. I’m just excited to get the scripts or the occasional message about some of the crazy things he’s thinking about. But it’s all him.

TT: I will say that I’m writing purely for Stephen. I was a fan of Stephen’s work well before we were teamed up on this. I was ridiculously excited when I found out he was the artist on the book. When I found out that they offered it to him and saw the first piece of art he turned in to get this gig, I just went, “Yes!”

This is one of those books where the Power Rangers are there for action. They’re there for entertainment. We’re trying to give both those things. It’s not about, “Let’s do a long, quiet moment that goes for six pages and it’s just talking heads.” Let’s give Stephen Byrne and the fans what they want and have a giant dinosaur robot fighting a monster or fighting the Flash. This is a time when we’ve never seen these two properties together. Let’s have as much fun with it as we possibly can.

FS: My brother was five when the original series debuted from Japan to Fox and I don’t know if I recall Lord Zedd ever infiltrating the Rangers’ HQ. It feels like you’re giving fans what they’re expecting, with those familiar touchstones, while still adding something new.

TT: Absolutely. There’s room for the big moments and those scenes that will make you smile. You wonder how they’re going to get out of this one and then you’re like, “Ah, yes, of course! There are 12 superheroes who’ll take care of that.” 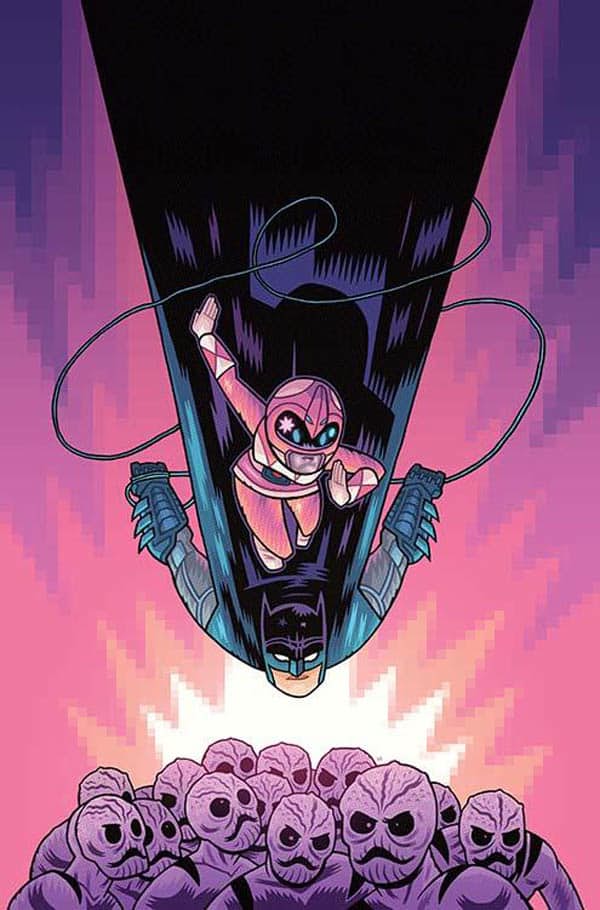 FS: You have experience with superhero action and design with your other work. How did you approach the Power Rangers’ world, keeping true to the designs while making them your own?

SB: It’s a little bit of a mix of things. I definitely love the Power Rangers’ universe. It’s bright and colorful, so I’m happy to lean into that side of my style. But I also reference the TV show a fair bit and I reference what’s going on in the other Power Rangers comics, Mighty Morphin Power Rangers and Power Rangers: Pink. I absorbed all those pieces and filtered them through my brain and then what comes out is what comes out. [laughs] Trying to keep the fun tone of the universe is my primary focus.

FS: What can you tease about what we can look forward to in the miniseries?

TT: Obviously, there’s something that happens in the first couple pages, so we’ll have to see how that resolves. I can tell you that Lord Zedd will team with a big, big DC supervillain. And it’s not Calendar Man. [laughs]

SB: There are lots of big moments coming. The scale of the story just keeps escalating as it goes on. If you think the end of the first issue is big and exciting, just wait until you get to issue 3.

Justice League/Power Rangers #1, written by Tom Taylor with Stephen Byrne on art, is on sale now from DC Comics and BOOM! Studios.

Two of comics greatest teams team up for the very first time! Something terrible has happened in Angel Grove! When the Command Center is breached and the teleporters are damaged, Zack is flung into another universe, where he’s mistaken for a villain by a mysterious masked vigilante. Can the other Power Rangers get to their friend in time to save him from Batman? Co-published with BOOM! Studios.