For folks clamoring for more Jem goodness after the finale of IDW’s recent Jem: Infinite story arc, the publishing company has heard your cries and has the perfect holiday gift for fans of All Things Outrageous. This week, IDW released the first issue of Jem and the Holograms: Dimensions, a new anthology series featuring stories revolving around Jem, the Holograms, and the Misfits.

One of those stories, “Roll with It,” features a tale of roleplaying and rambunctiousness, with writing by Kate Leth and art from Tana Ford. Leth’s words + Tana’s art + Jem + roleplaying? Seriously, it’s all the good things rolled into one. Ms. Leth and Ms. Ford spoke to us recently about the genesis of “Roll with It,” translating roleplaying hijinks to comic form, and what projects they have brewing down the pike. 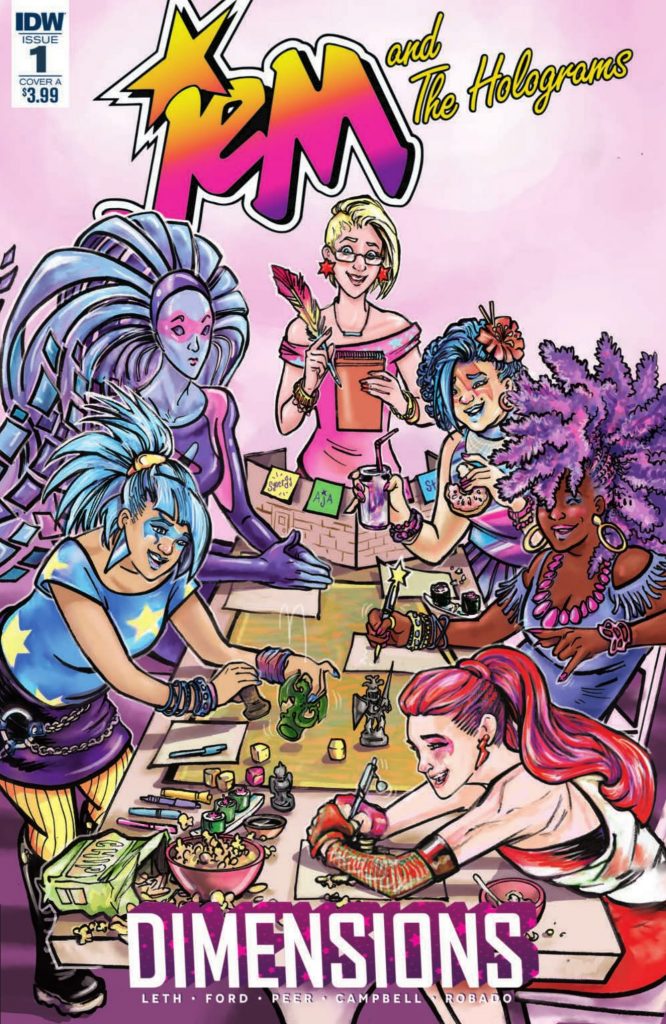 JEM AND THE HOLOGRAMS: DIMENSIONS #1 cover

FreakSugar: How did you become involved with Jem and the Holograms: Dimensions?

Kate Leth: I worked with the editor, Sarah Gaydos, on the Edward Scissorhands miniseries. I’d expressed interest in Jem a few times, so when there was a slot for me to try it out, I was all in!

Tana Ford: It was one of those moments where you seem to have perfect timing.  I had just wrapped on Silk over at Marvel and was looking for a new art challenge. Sarah Gaydos came along and offered me this dream project. I got to draw a variant cover and illustrate this zany story written by Kate Leth –what’s not to love? 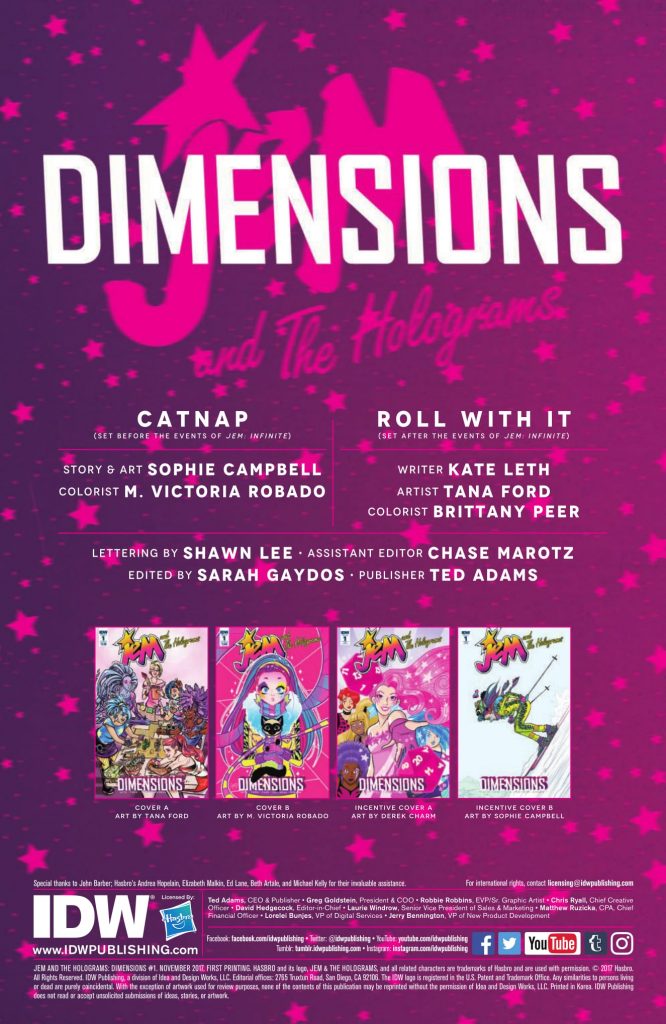 FS: Tana, the characters in Jem’s world, while different, lend themselves to a flexibility to have their looks tweaked and played with. Did you put your own spins you wanted to try out on Jerrica, Kimber, and the gang?

TF: This was my first foray into Jem’s world and that always makes me a little shy. I wanted to do justice to these excellent characters while also giving them life and showing that exuberant energy of theirs coming off the page. So that was my main focus.

When you read the story, you will see all of the girls are super tired at first, they’ve just gotten back from a long and exhausting tour, but Kimber wants everyone to stay up playing Dungeons and Dragons. It’s a brilliant story. And I tried my best to show the range of emotions throughout. 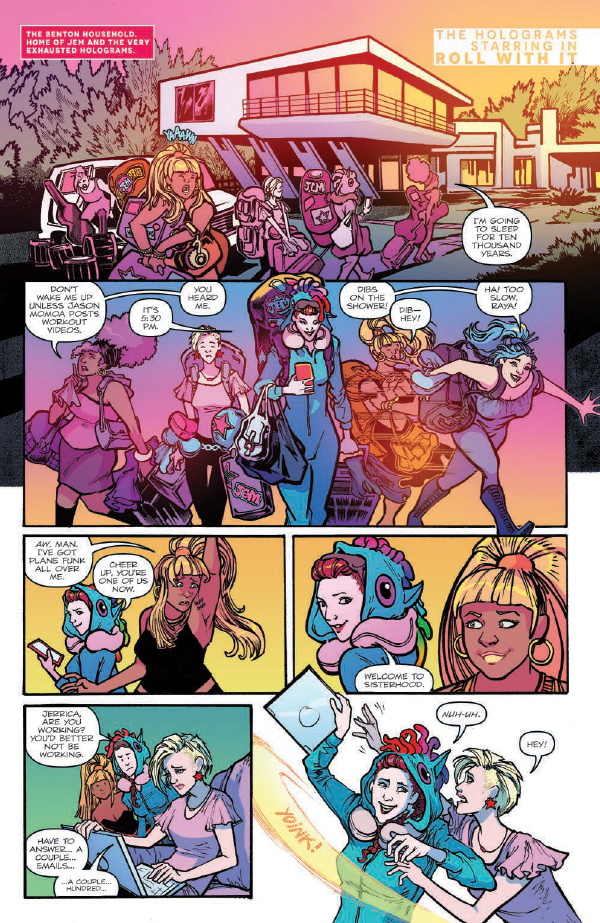 FS: Some of my favorite pieces of pop culture that feature characters roleplaying—Community does a very good job at this—is amplify what we already know about them, something you do extremely well here. Is that why you landed on using roleplaying as the staging concept?

KL: I got there for a number of reasons, really. Since the last time I worked with Sarah, I’ve actually ended up working for Hasbro in the animation department. My coworkers and I were talking and I hadn’t realized they owned Dungeons & Dragons, so naturally I wanted to find a way to get my hands on it. I’ve played a fair bit of D&D and am a big fan of the Adventure Zone podcast. This was a bizarre, fun, natural fit. As for how it played into the characters, I mainlined the Jem comics for a second time before writing this and really felt a kinship with how Jerrica takes on so many tasks. She has a hard time deliberating. A perfect, imperfect DM. 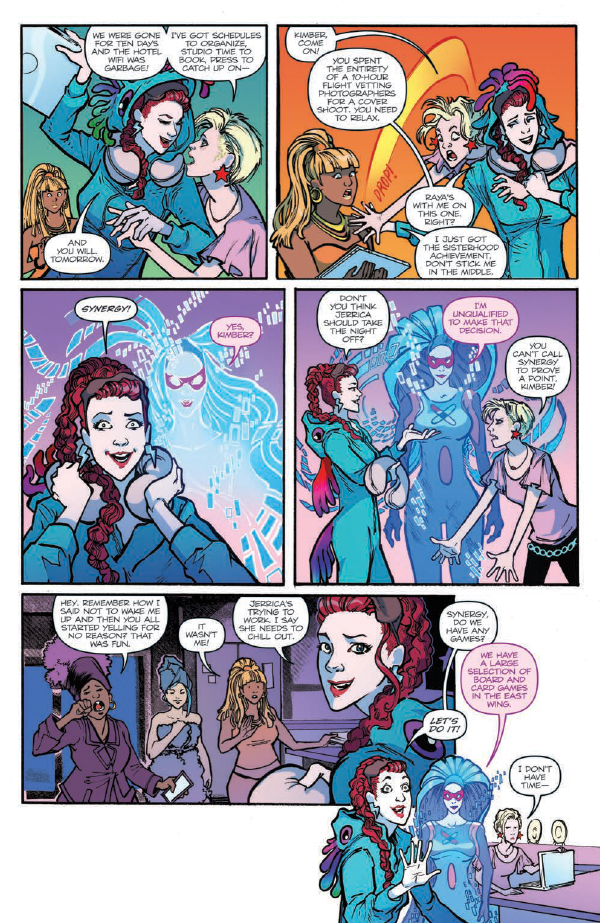 FS: Following up on that, one thing that you nailed for me and had me nodding me head about is how so many roleplaying sessions can devolve and get off track quickly—which I don’t always mind, admittedly. (I’ve been in Jerrica’s role as put-upon DM, though, too.) Did any of your personal experiences seep into the story?

KL: Oh, absolutely! I don’t know if I’ve ever been in a session that didn’t get sidelined by one thing or another. They’re chaotic, and you’re basically herding cats as a DM. 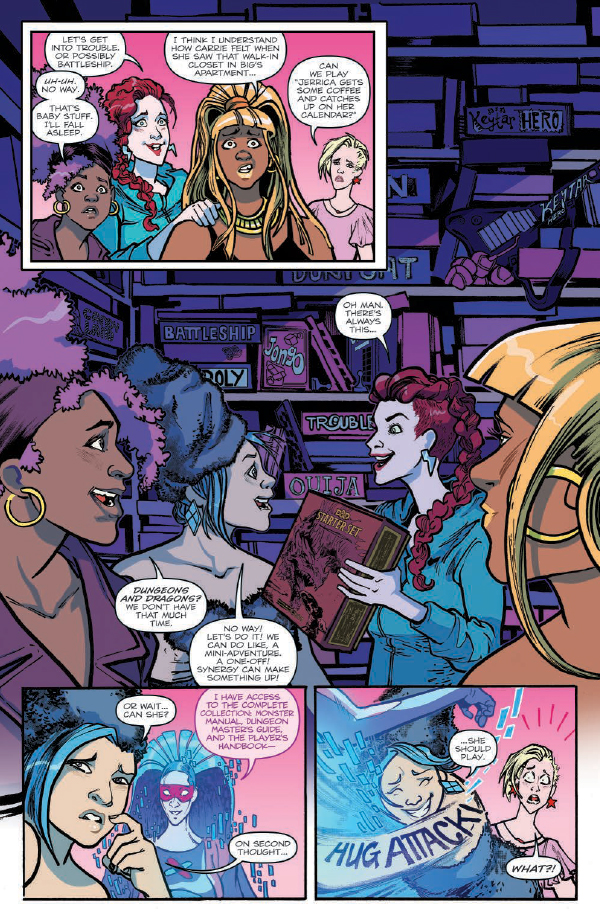 FS: Jem is a title steeped in music. Even in stories in which the characters aren’t performing, music is always there in the universe’s DNA. Is there any kind of music you listen to in order to get in a certain headspace when working on Jem?

TF: Well! I had been meaning to get into The Adventure Zone Podcast, which if you don’t know, is a Dungeons and Dragons podcast put on by three sons and their dad, and at least two of them have never played before. It’s totally charming and sweet and laugh out loud funny. So what better time to do a deep dive on that show than while I am literally drawing The Holograms becoming D&D characters? It was amazing. Very meta. 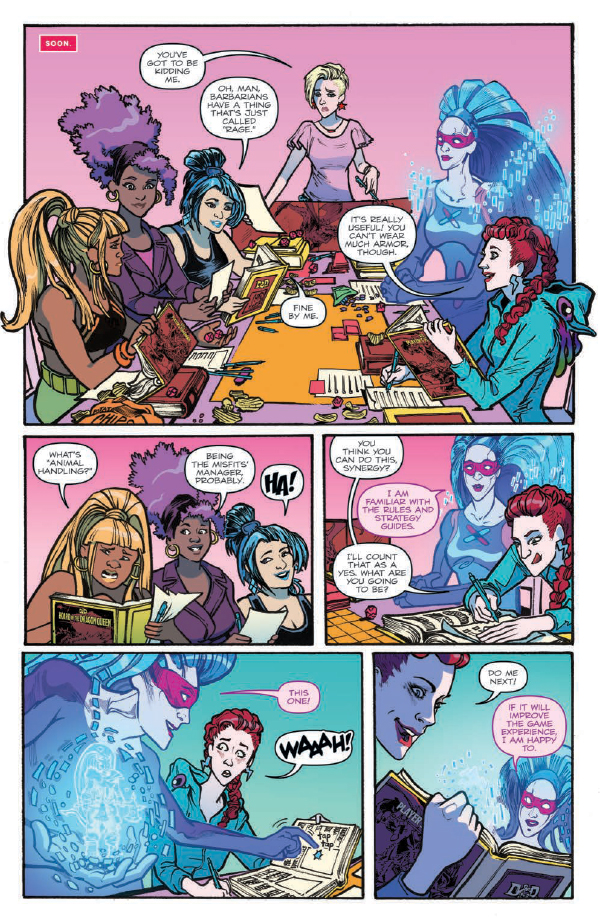 FS: Tana, roleplaying involves a lot of talking and not many visuals, but you and Kate tackled that in a novel way. What was the collaboration process like with Kate?

TF: Kate is a gemstone. I saw her at FlameCon sometime after she had handed in the script but before I had started on it and we got to talk shop a little bit face to face. Which is always the best. FlameCon, if you don’t know, is an amazing convention put on by Geeks Out in NYC that is the queerest, sweetest, most wonderful convention. I highly recommend that if you can go, you do go. Best crossplay. Best cosplay. Lots of Jem love.

But I love (love! love!) the Dungeons and Dragons aesthetic. Halberds and leather and shields and armor and magic, oh my! Getting to draw the Holograms (even Synergy!) as D&D players was a delight. 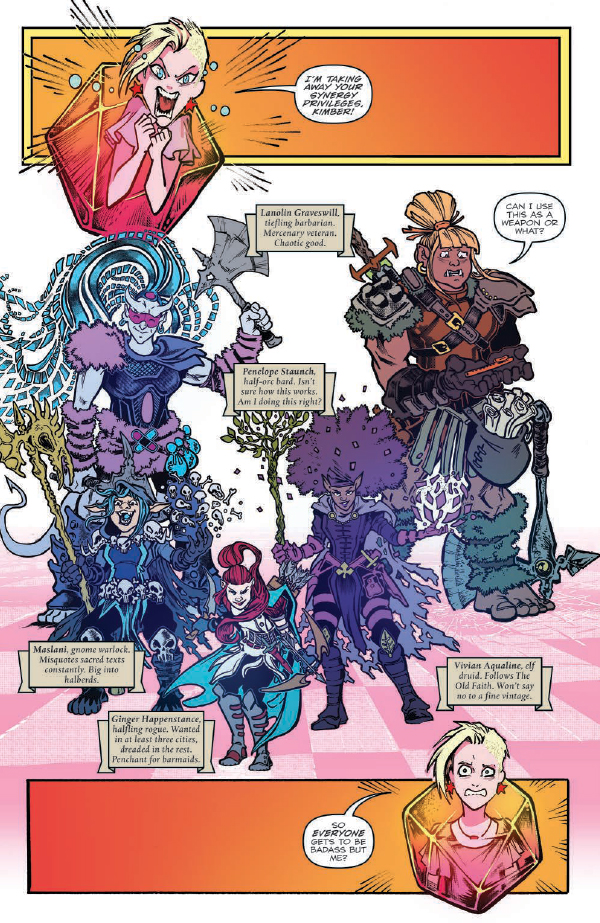 FS: It’s nice to see the Holograms including Synergy in their wind-down, as she’s practically family. What do you see Synergy’s role being as part of the Hologram/Benton clan?

KL: I think everyone interprets Synergy differently, and that’s part of what’s fun about the Jem universe. She’s more than Siri but less than a full-fledged personality, y’know? I’m really interested in her – in the ‘80s, the concept of a holographic butler, essentially, was so futuristic it was unthinkable. Now people have Alexas in their homes that order pizza and tell you the weather. For her to still be relatable, she needs to be quirky, sometimes surprising.

FS: Do you remember your first introduction to Jem?

KL: I remember being very into the looks and the songs (especially the Misfits’ hits) as a kid, but really coming back when the comics started up. Sophie and Kelly’s reinvention of the characters was more real and relatable: more queer, more modern, more diverse. I’m all about updating a classic to reach a new audience.

TF: 80’s cartoons. Before school. I was allowed to watch one episode of Jem and the Holograms then G.I. Joe before getting ready for school.

FS: If you had to pick any of the Holograms or the Misfits’ aesthetic, whose would it be? I always resolutely pick Stormer.

KL: Kimber and I both have pink mohawks, so I identify with her, but Aja’s moto-chic-punk style is pretty dreamy. I’m not thin either, so I’m very into Stormer’s punk/pin-up redesign. Then again, Pizazz has the best color scheme… Don’t make me choose!

TF: Ooh! I loved drawing Kimber in this. But she was extra fun because she was wearing her Rainbow Dash Onesie the whole time, which is hilarious. So, Kimber.

FS: Do you have any projects coming down the pike you’d like to tease?

TF: I just wrapped on Star Trek #15 for iDW! Which was *also* a dream come true. That Sarah Gaydos, man. She answers this girl’s prayers. So be on the lookout for that. It’s written by Mike Johnson, who really understands the characters in Trek, and knows how to have fun in that universe. We got to do some wild and awesome things. Check it out!

FS: Do you have any more Jem stories percolating that you’d like to tackle down the line?

KL: Oh, tons! I love these girls and how distinct their personalities have become. I guess we’ll have to see what happens.

Jem and the Holograms: Dimensions #1, featuring Kate Leth and Tana Ford’s story “Roll with It,” is on sale now from IDW.

Jem: Dimensions brings both new and beloved creators to the world of The Holograms! In a story by Kate Leth and Tana Ford, the Holograms throw a Dungeons and Dragons game night with Jerrica as the Dungeon Master, and even Synergy joins the fun! And in Sophie Campbell’s story, the Misfits (plus some NEW faces) take a break to go on a ski trip, when all hell breaks loose…and so does Pizzazz’s cat!