With Hawkeye, writer Kelly Thompson has taken superhero archer Kate Bishop back to Los Angeles to start up her own private eye firm Hawkeye Investigations. Drawing on the character’s rich history, Thompson delves into what makes Kate tick, both in her past and her present.

In Hawkeye #7, on sale now from Marvel Comics, Thompson and the rest of Team Hawkeye focus their gaze on one pivotal aspect of her past: her father, who was part of the impetus for her heading west in the first place. His disappearance has been disconcerting for her on a number, which Thompson begins to address in the latest issue.

I spoke with Ms. Thompson recently about how she became involved with this newest Hawkeye series, her collaboration of the book’s creative team, and how Kate’s past is informing her present in issue 7. 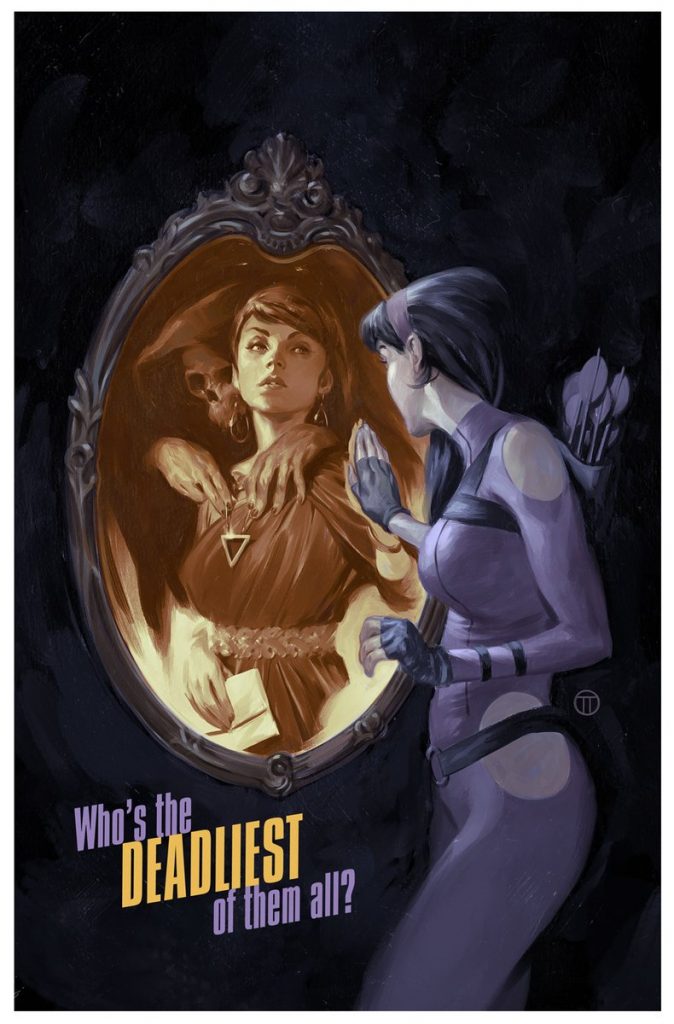 FreakSugar: Before we get into discussing issue 7, I wanted to talk about your involvement with Hawkeye and star Kate Bishop. How did you become involved with the book? Was this a title you lobbied to write?

Kelly Thompson: Yes, I had actually been trying to get my foot in the door with Marvel to let me pitch for a while. And my Kate Bishop Hawkeye book (then called Hawkeye Investigations) was the first pitch I really tried to get through. I don’t know for sure, but I believe the strength of the pitch (and the other work I was doing) helped get me the co-writing job on Captain Marvel & The Carol Corps with Kelly Sue DeConnick in 2015. Sana Amanat was my editor there and she liked my work and liked the Kate Bishop pitch and so we began the slow march toward making it happen. So…I think I first lobbied Jeanine Schaefer with it in mid-2014…and Hawkeye #1 came out in December 2016, so a little over two years to make it happen. Don’t give up, kids!

FS: For folks who might not be familiar with the comic or Kate Bishop, how would you describe the conceit of the series?

KT: One part superheroes and one part neo-noir P.I…and all parts sass.

FS: Kate’s a character that’s been around for over a decade now. What’s your view of Kate and her growth since her inception? How have her past experiences informed how you approach writing for her?

KT: I was hugely influenced by Kate in Matt Fraction, David Aja, Annie Wu, and Matt Hollingsworth’s Hawkeye. In that (totally brilliant) series I feel like there are two very different Kates presented – and my personal interpretation is that it’s because one version is sort of Clint’s view of Kate and one is more Kate’s view of herself. Obviously since our story is Kate’s own story we draw more form the “Kate’s view of herself” stories, which are the Fraction/Wu/Hollingsworth stuff that takes place in L.A. There’s no way not to be influenced by a work that definitive and excellent, but we’ve tried our best at Team Hawkeye to be inspired by it, but to also carve our own path. 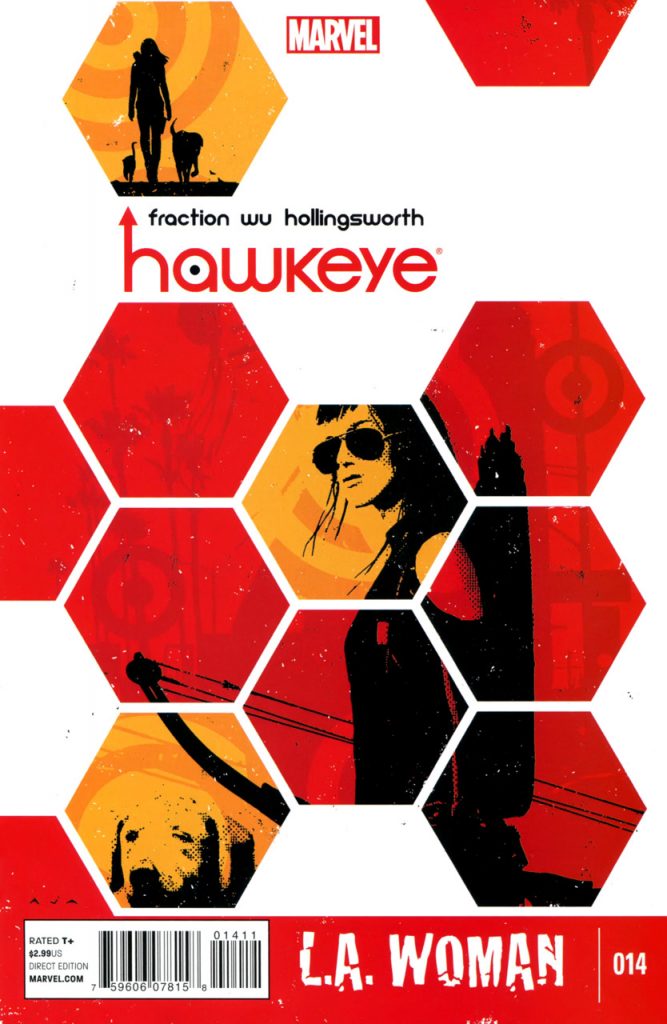 From the aforementioned “L.A. Woman”

FS: Kate has turned her eye back to private investigation in this new series. What was it about her character and her past that made this shift appealing to you as a writer and an angle you wanted to pursue?

KT: I think, as mentioned above, the groundwork had been well laid in the L.A Woman story in Hawkeye and it made a lot of sense to revisit that, especially since without her father in the picture Kate suddenly found herself a superhero that needed to bring in some actual income. Additionally, there had been some great set up in regard to Kate’s father, and it was a mystery that needed solving…making Kate a P.I. again just made sense.

FS: Issue 7 comes off the heels of an adventure with fellow private eye Jessica Jones. Where do we find Kate at the beginning of the issue?

KT: Kate has just been jumped by mysterious thugs and given a bit of a beating. She’s also been left a gift from Madame Masque. And the gift is her dead mother’s necklace with blood on it, naturally. Madame Masque is awful at gifts! So Kate sets off to bust some heads, but like most P.I. cases, little is what it seems. 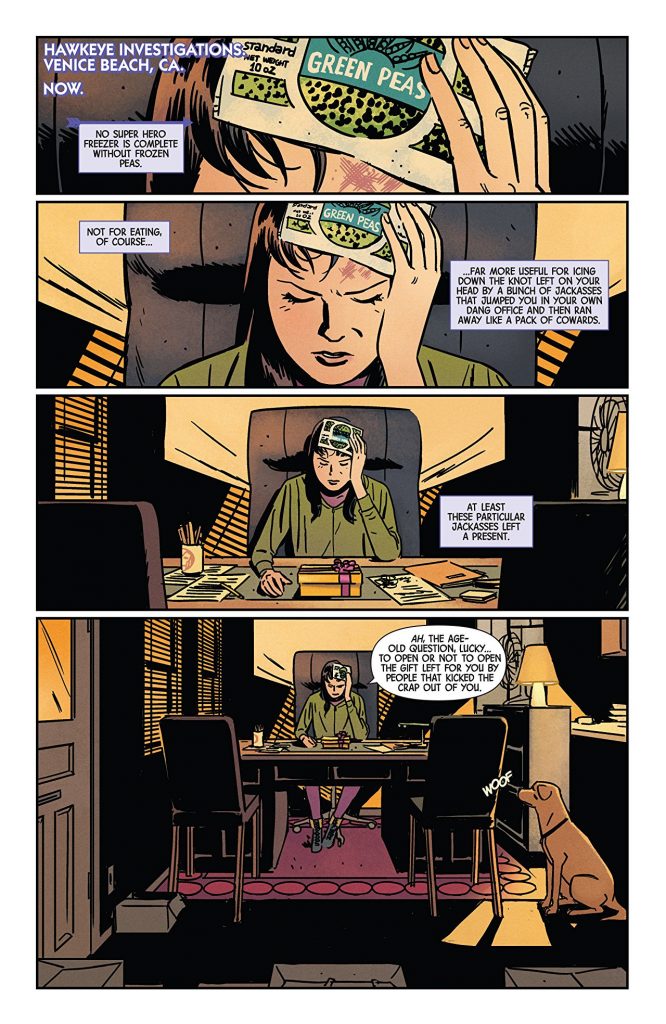 FS: One of the main drivers for Kate to head to Los Angeles was to look for her father. Issue 7 delves into Kate’s upbringing and her past with her parents. How has her childhood, as you’ve revealed in this chapter, informed who she is today?

KT: I think Kate is one of those great characters that is certainly informed by her past, but is much more than the sum of her parts. But SHE doesn’t always know that. She has plenty of fears about who she is and where she comes from and what that all means. But Kate is one of the most pure superhero characters out there – which is to say why and how she does it comes from a place of true good.

FS: Following up on that, we see that Kate has some trust issues with her father, and for good reason. They have had something of a volatile relationship over the years, and it appears that he’s given Kate’s mother reason to be fearful of him. What does Kate hope to do or say when she finally meets him again?

KT: The memories that we see in Hawkeye #7 are very much about Kate taking a second (and harder) look at some of her memories. Trying to examine them to see what she might have missed, what she might have misunderstood now that she knows more. I think Kate would like nothing more than to grill her father, but increasingly I think she’s realizing that might not work as she can’t trust what he might say. 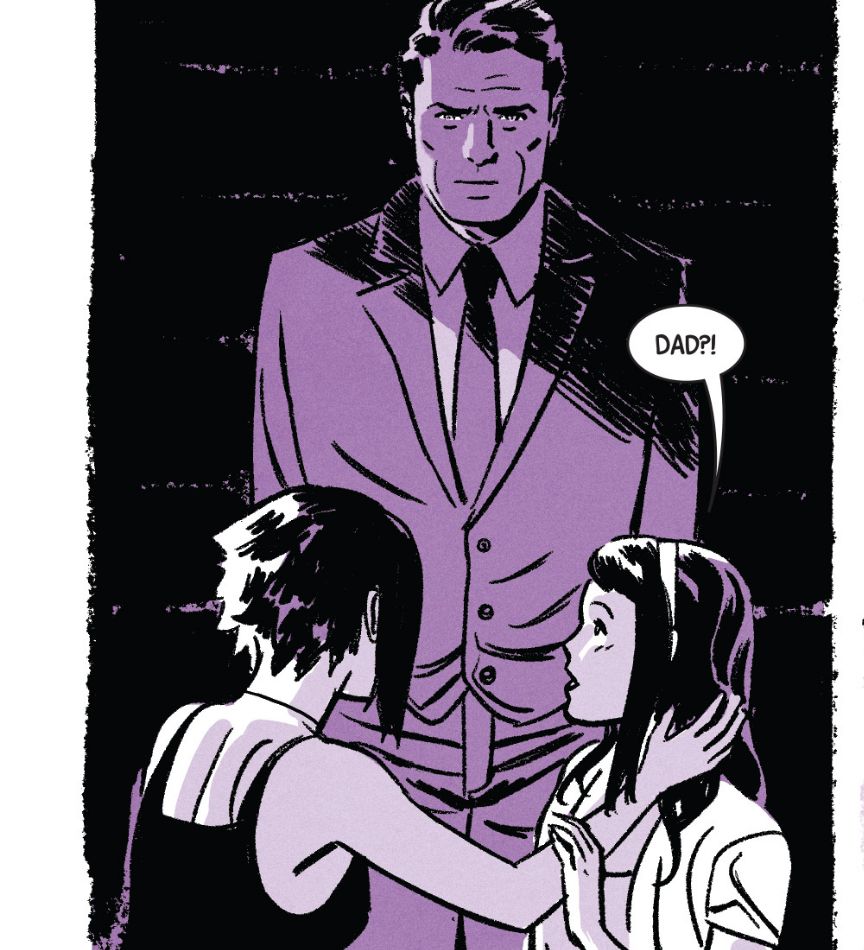 FS: Years ago, Kate’s mother disappeared, along with the necklace her mother had crafted to represent her, Kate, and Kate’s sister. When she received it from her attackers at the beginning of this issue, seemingly from Madame Masque, it seemed to move her in a way we have rarely seen her, and understandably so. How would you describe the range of emotions she’s experiencing upon seeing it again after all those years?

KT: I think there’s probably little more sacred to most folks than their dead loved ones being respected. So if you want to use that as a weapon in some game you’re playing…you better be able to cover your bets. Kate is not someone that holds onto trauma, she’s gotten very good at surviving, both through her nature and through her experiences, but this one cut her deep and we’re going to be seeing some different sides to her as she goes through this arc.

FS: One of the joys of reading your issues of Hawkeye is the page compositions and showing how Kate checks a room before throwing herself into the action. This issue’s big melee with the suited muscle was a delight! What’s the collaboration process like with the book’s artists to convey how Kate sees her surroundings?

KT: Thank you! Working with artist Leonardo Romero and colorist Jordie Bellaire is an absolute delight. I get a lot of credit for Hawkeye, but we all know a comic succeeds or fails based on the strength of the whole team. Your book is only as good as your weakest link, and we have no weak links! I write pretty tight scripts and we collaborate as a team on a lot of stuff (like Kate’s “Hawkeye Vision”) but Leo is an exceptional storyteller, and he has this clean simple style that feels at once both modern and retro, a perfect fit for a book like ours. He’s also the rare artist that can handle hi-stakes superhero action and more street level stuff with seeming ease. All of that and the range of emotion he gets for our characters, using such a pared down style, it’s simply incredible. But the wrong colorist on Leo’s art could ruin everything and so we are insanely lucky to have Jordie, who is an absolute master of color. 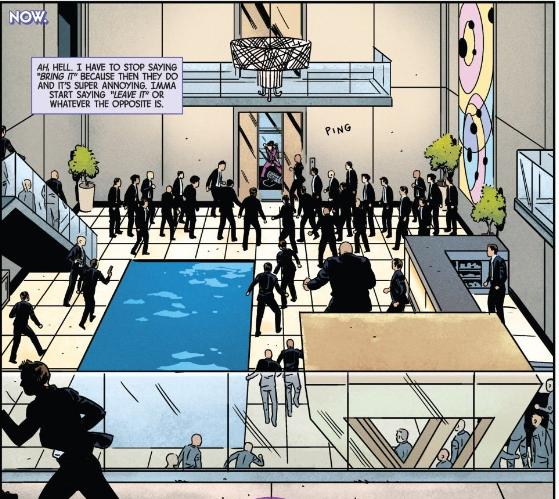 FS: How would you describe Kate’s initial mental state upon seeing her father after all this time?

KT: I think she has this moment of total surprise, she was absolutely convinced when she opened those doors she was going to be facing Masque. But then a split second later her internal thoughts are “Of course. Of course it’s so much worse than I thought. Because this is my life, I should have known!”

FS: Without giving too much away and showing all of your cards, what is it that Kate’s dad wants? What can you hint at about his endgame? Because, at this point, he doesn’t seem to be the best of fathers—to put it mildly.

KT: I don’t think I can tell you much without risking giving too much away – this is a detective story after all – we need our surprises! But I think it’s safe to say that Kate and her father are not going to be reconciling any time soon!

FS: What can you tease about what we can see next issue?

KT: Well, this arc that we began in issue 7 continues through to Hawkeye 11, so we’re going to be plumbing some real emotional depths for Kate here as she tries to get to the bottom of things. She’s going to take on a dangerous case – and maybe she shouldn’t have – that has some uncomfortable parallels to what’s going on with her and her father. And she’s going to have to fight a WHOLE LOTTA BAD GUYS.

Hawkeye #7, written by Kelly Thompson with Leonardo Romero and Jordie Bellaire on art, is on sale now from Marvel Comics.

Hawkeye finally gets a lead on the top-secret case that brought her out to Los Angeles in the first place — and it might be more than she bargained for…In order to solve this mystery, Kate will have to take a good hard look and who she is and where she came from. But is she really ready to face the ghosts of her past?