From as early as the property’s 1980s cartoon roots, Jem has always had a sci-fi sensibility behind the glamour and glitter, fashion and fame. The lead character uses hologram technology to transform her appearance and interacts with A.I. on a regular basis, after all. That trend carried over to IDW’s Jem and the Holograms comic book, amped to 11 especially in the series’ “Dark Jem” arc.

However, this summer, IDW and Jem writer Kelly Thompson are pushing the science fiction further than they have before in the current “Infinite” event, a six-part tale crisscrossing the Jem and the Holograms: Infinite and Jem and the Holograms: The Misfit: Infinite miniseries. “Infinite” is a reality-hopping tale in which Jem, the Holograms, and the Misfits find themselves on an alternate Earth on which that world’s Jem and her cohorts rule using the very Synergy hologram tech that allows Jerrica Benton to become the pink-haired rocker Jem. Our Jem and company are co-opted to liberate the alternate world, with the Misfits pulled into the mix as well.

Ms. Thompson spoke with me recently about the conceit of “Infinite,” revving up Jem‘s sci-fi aspects, and how the story will change the relationship between the Holograms and the Misfits. 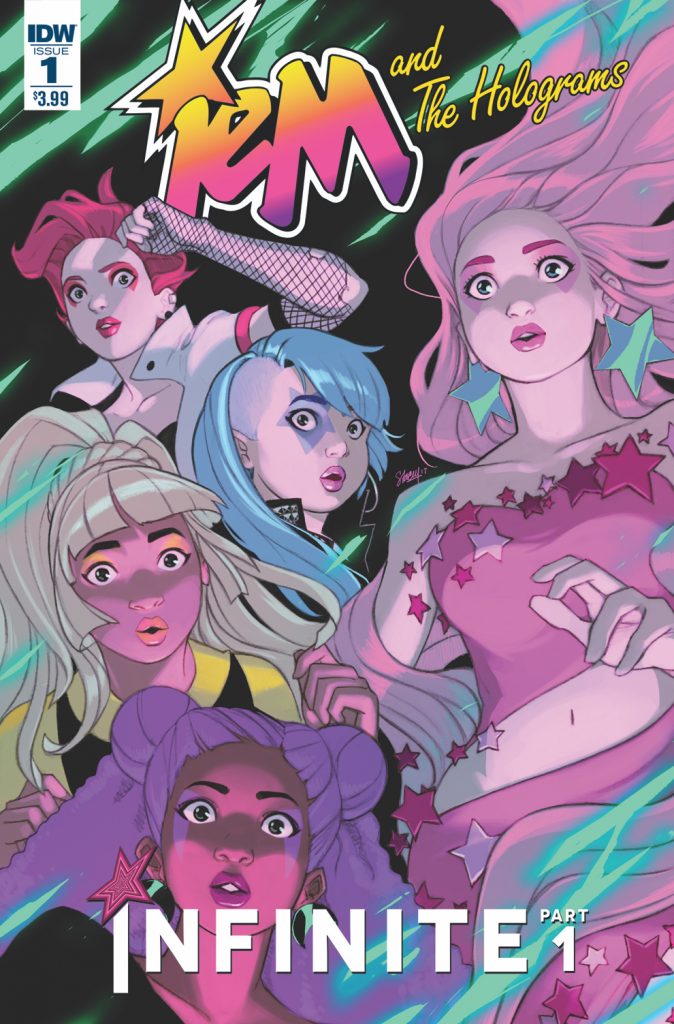 FreakSugar: For folks who might be playing catch up, where do we find Jem and company at the beginning of Jem and the Holograms: Infinite #1?

Kelly Thompson: We’re pretty much picking up where the other series left off – The Misfits are upset about what they feel are slights against them from Jem and The Holograms – slights that damaged their brand; and Jem and The Holograms are busy weighing whether they should come out to the world with the truth about Jerrica being Jem and the Synergy Technology that makes that possible.

FS: You’ve never shied away from embracing the sci-fi elements that accompany Jem and her story, which has given way to a bevy of compelling stories in Jem’s first run. What’s the genesis behind “Infinite”?

KT: “Infinite” is really a chance to lean dramatically into the sci-fi aspects of Jem. A chance to explore what the Synergy Technology being out in the world would really mean – for good and ill. I don’t want to say too much, but Infinite is definitely our characters peek into what happens if they make very different choices in their lives. 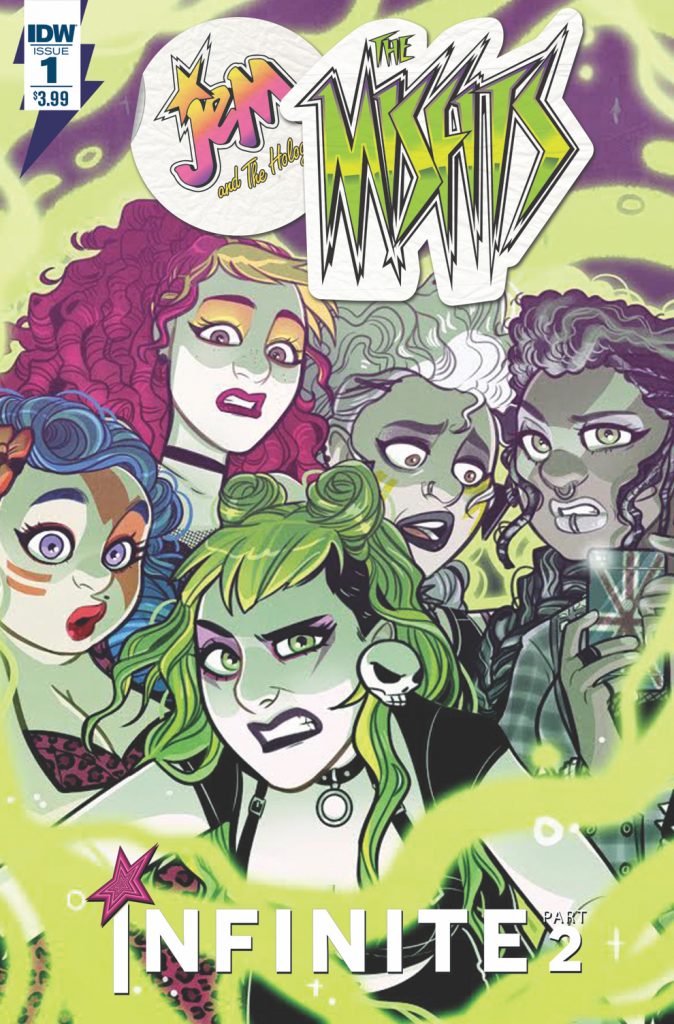 FS: At the beginning of issue 1, we find the Holograms and the Misfits on the outs and back to square one in terms of their rivalry. With the Misfits’ involvement in the “Infinite” storyline and their own miniseries, will we get the opportunity to see versions of the bands who aren’t each other’s throats? Will the reality-traveling give either band some perspective on their relationship?

KT: “Infinite” is going to drastically change things for the relationship between Jem and The Holograms and The Misfits. There’s no turning back after some of the events in Infinite. In some ways it’s going to be good for them both – the bands coming together in dramatic circumstances for a common good — but in other ways it’s only going to deepen the rifts and resentments between them.

FS: Following up on that and in that same vein, Jerrica and Rio aren’t arguing following Rio learning Jerrica is secretly Jem, but they’re no longer a couple as a result of the revelation. Will the Holograms’ adventure have any impact on their relationship?

KT: Jerrica and Rio are still very much in love, and “Infinite” is probably not going to help matters for them, except perhaps to reinforce for Jerrica how important it is to her to win Rio back.

FS: At the end of the first issue, an alternate reality version of Techrat has come to ask for aid against those who are using the Holograms’ father’s technology for evil purposes. How much can we trust Techrat? Is he on the up-and-up, or is he using the Holograms’ kindness and desire to see Emmett Benton to draw them in for dubious ends?

KT: This Techrat isn’t 100% trustworthy but he’s a great deal more trustworthy than the Techrat our characters’ already know – and that’s mostly due to his relationship with Emmett Benton. Maybe all Techrat needed to be a “good guy” was a strong father figure, a best friend and role model? 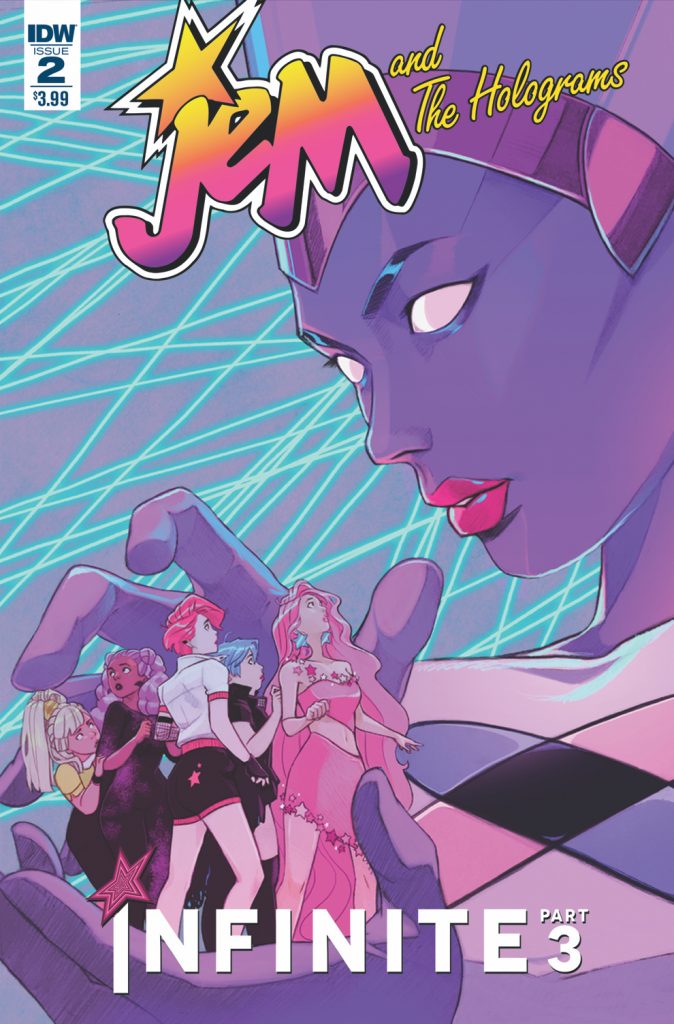 FS: I adore reality-hopping stories. On the macro, I enjoy reading about “the road not taken,” Sliding Doors types of tales and seeing how histories and characters change. On the micro, though, it’s pretty nifty to see how writers and artists run wild with character designs, personality changes, hair styles, and so on. Were/are you a big fan of What If/Elseworlds stories?

KT: I also love alternate reality stories. Some of my favorite episodes of television (and comics!) are the trips into alternate version of beloved characters – the road not taken – as you said. But you can’t have those episodes and have them really work until you’ve clearly established the baseline before you change everything, so this is our first opportunity to try that. In Infinite we get to do some crazy world building and tons of character re-designs, that thanks to artists Jenn St-Onge and Jen Hickman is all really gorgeous and fun.

FS: Jem always nails the landing because, for me, the series is this mix of fun, drama, and grand, bold strokes. With the sci-fi element at the fore to a greater extent than it has before, how big are you going with “Infinite”?

KT: Thanks! As always with Jem we sort of have a problem of an embarrassment of riches when it comes to characters, so we aren’t able to do everything I’d like to do, but I think we’ve got some great character moments, some good twists and turns, some excellent evolution of characters and most importantly a wonderful “what if” chance for these characters – for them to see what happens if they made different choices, and more importantly perhaps, if they make different choices in the future.

FS: Is there anything you can tease about what we can expect to see going forward in the “Infinite” storyline?

KT: Ah, I never know how much to say and how much not to say, but I can say that what happens in Infinite is going to have far reaching consequences for our characters and the “Jem World.” What happens in “Infinite” definitely does NOT stay in “Infinite.”

Related: Artist Jen Hickman on Diving into Jem and the Holograms: Infinite