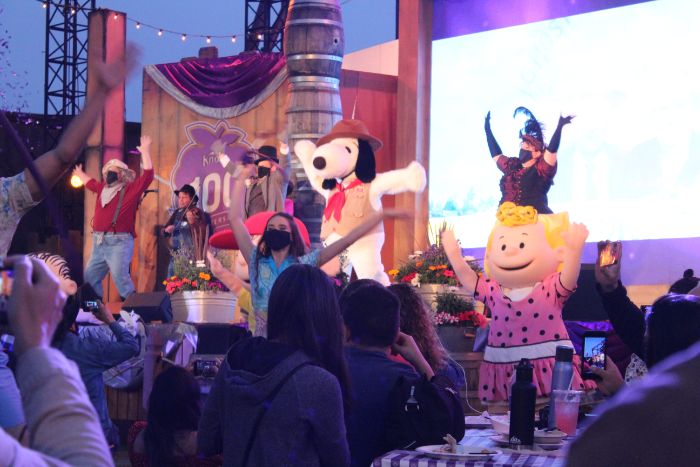 America’s oldest theme park actually turned 100 years old last year, but with every theme park forcibly closed, the planned big birthday party couldn’t happen as intended. This week, however, it reopened to the public with a belated 100th birthday bash, 101 years after its actual founding. My wife Julia and I attended the preview night, and are here to speak about the sumer food offerings, as well as the new anniversary ride that essentially reskins an existing ride to be more of a tribute to a much older one. (Most photos taken by Julia Thompson. Photos of Julia taken by me, unless otherwise noted.)

For a brief period in the ’90s and aughts, after being acquired by Cedar Point, Knott’s went through a phase of becoming the generic kind of thrill-ride rollercoaster park that tends to appeal to teens. While they still have plenty such rides, the focus since the early 20-teens has been on reclaiming Knott’s unique identity as the first American theme park. More family rides have been installed, and the existing ones severely upgraded and improved with animatronics equivalent to those of Disney and Universal rides. Bear-y Tales 4D: Return to the Fair encompasses all of that. 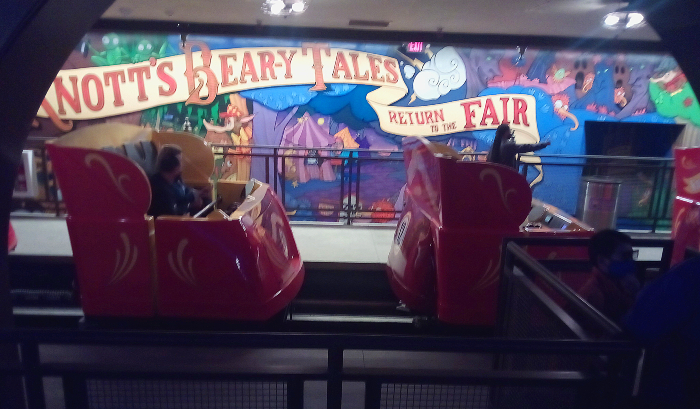 The original Bear-y Tales ride was a dark ride designed by Disney Imagineer Rolly Crump, at a slight budget cut relative to Disneyland. Opening in 1975, the ride followed Boysen Bear and Girlsen Bear from their family’s boysenberry pie factory to the local fair. Though it would never be mistaken for Pirates of the Caribbean, the ride had a lot of character, with its jumping, bug-eyed frogs, mop-like birds, and probably overly stereotypical Gypsy fortune tellers. In 1986, the ride changed to Kingdom of the Dinosaurs, and then in 2015, changed completely to a 3D interactive shooting ride, the steampunk-themed Voyage to the Iron Reef. That was always my personal favorite Knott’s ride, but realistically, its theming didn’t match anything else in the park. The new Bear-y tales maintains Iron Reef’s 4-D interactive shooting format, but restores the theme and characters of the original dark ride.

Aside from a few blacklight-sensitive displays and props, the ride is primarily screen-based, although it does preserve the practical “Thunder Tunnel” section of the original, designed by Crump to adjust the riders’ eyesight in the darkness so he could change the lighting scheme completely for the scenes before and after. With everything on a 3D screen now, the tunnel is more a novelty than anything. 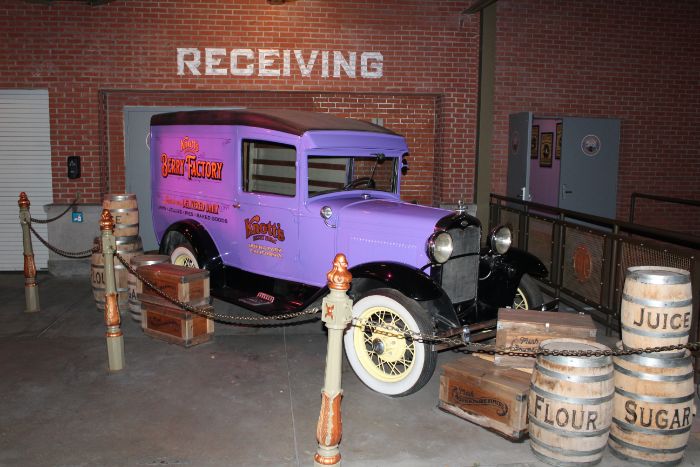 And those screens threaten to overload the eyes at times. The effect is one of being in the middle of a massive multiplayer game in the style of something like Crash Bandicoot or Banjo-Kazooie. The goal is to use your jam jar-shaped gun to fire berries at the Coyote Kids who run through each scene with stolen pies on their heads. Hit the pie, and they drop it, and you score. (Four of the coyote kids are already available as plushes.) But most everything in the scene is interactive — hit other items and they will react. The downside is it’s impossible to follow the “story” or even take in the scene if you’re busy aiming at the coyotes. A repeat ride is called for; next time, I plan to ride it one time without shooting just to take it all in. Except maybe for the final boss battle. Sweetened berry smells are piped in throughout, as well as heat effects for scenes close to the oven. And yes, the Gypsy fortune tellers are still there.

I may miss the Iron Reef, but this is a worthy — and much more merchandisable/in-theme — replacement, with a lot of repeat riding value. I will note that unlike Disney shooting rides like Buzz Lightyear or Toy Story, you don’t just get your score ranked alongside fellow riders in your car, but with those in the next car too. So the final scoreboard shown at ride’s end is a top 8, not top 2. (Each ride vehicle holds four riders.)

The evening’s ceremonies kicked off with a video message from the real president of the United States. Namely, President Camacho, a.k.a. Terry Crews, talking about his grandchildren. 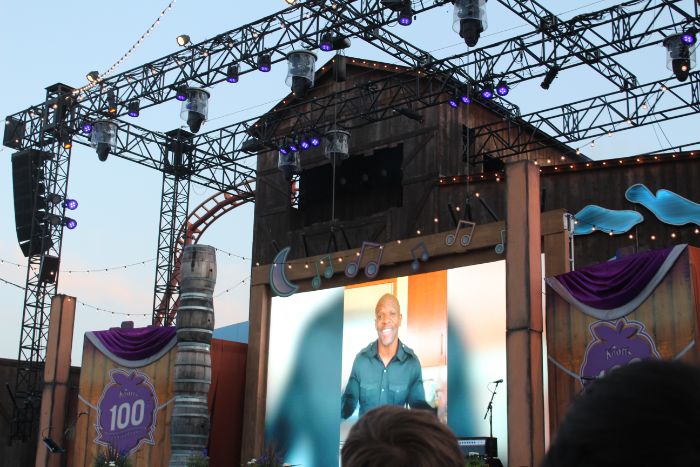 Seeing Crews and other celebs like Tony Hawk talking about their past with Knott’s, my initial reaction was, “When did they get so old?” followed by “Crap, when did I get to be so old?” But next to Knott’s at 100, we’re all young. These were followed by a country band I could easily imagine Sacha Baron Cohen infiltrating.

Whittles the prospector is returning as a new mascot character for photo ops. Which are still somewhat restrained by social distancing, for now. 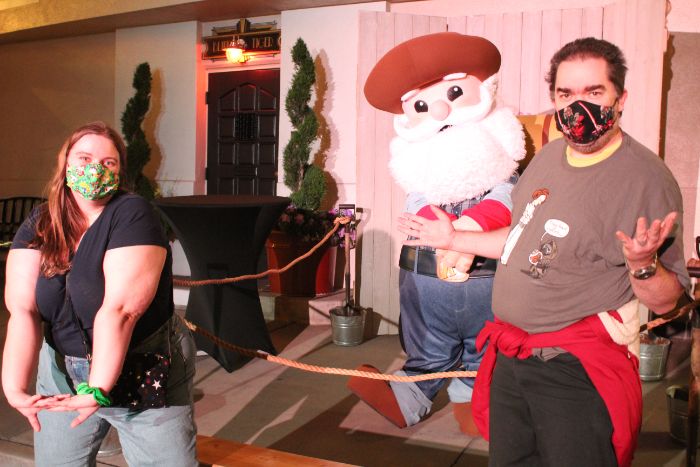 Knott’s will also be working with the Boys and Girls club to do 100 acts of local charity, with further details TBD. But the main event of the preview evening was the food. As usual, entrants were provided with a tasting card, that can be exchanged for promotional food and drink items (including beer and wine, for those over 21).

We did our best to try as many as possible, for your and our pleasure, and our occasional pain. Here’s a breakdown: 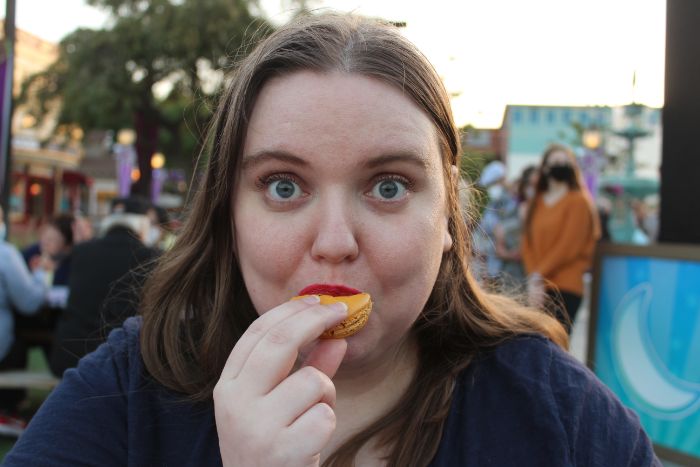 Julia’s face after tasting one says it all, really. While most commercially available macarons feature basic buttercream in the middle, these, like similar Disney options, have a tart fruit curd in the middle that just explodes with flavor. Small but mighty. You get two per order. 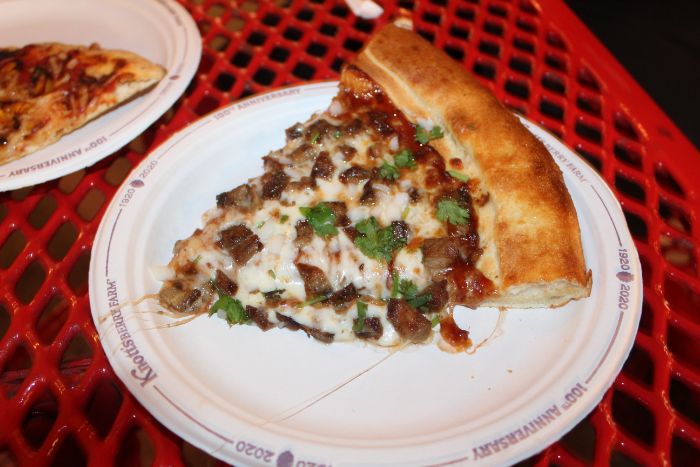 Exactly what it sounds like, overflowing with meat and cheese. I wish I could call up a local place and order a whole one. Sweet barbecue sauce, marinated meat, taco al carbon toppings and lots of cheese make this a fusion for the ages. 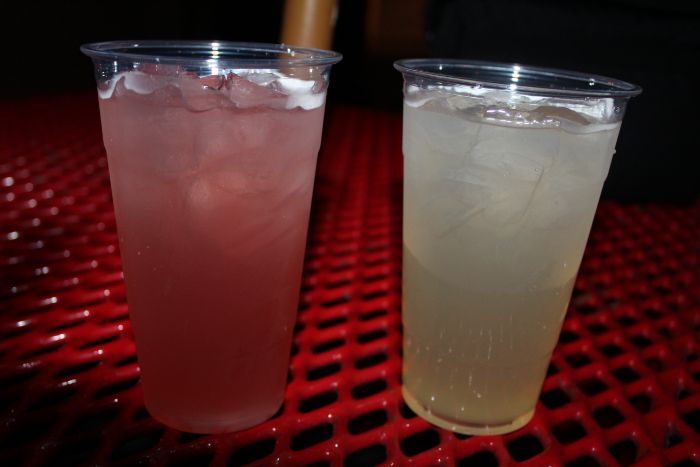 If you’re having trouble believing that anything with the word “cucumber” in it could fit this category, believe me, so am I. But it’s real. And it’s the one on the right. Somehow cucumber water really brings out the flavor of the cantaloupe, which proceeds to dominate. Compared to its companion, Watermelon and Kiwi Lemonade, also available at Hollywood Hits Pizza, it tastes of real fruit, while the watermelon tastes like flavored syrup. Both hit the spot, but the lighter melon wins any head-to-head taste test.

Most WTF: Acai Bowl With Granola, Fresh Fruit and Coconut 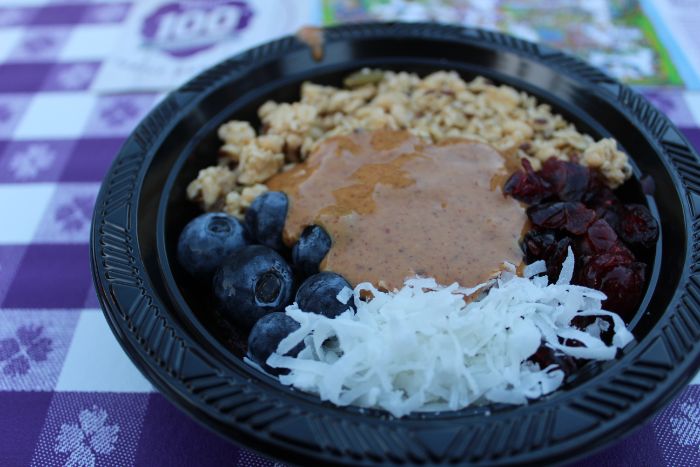 “Fresh fruit” in this case means blueberries and craisins (dried cranberries, sooo not fresh). Plus a big dollop of almond butter. Julia tried this first and said it tasted “like pickles.” I tried a bite and thought it resembled mostly flavorless ice mush. 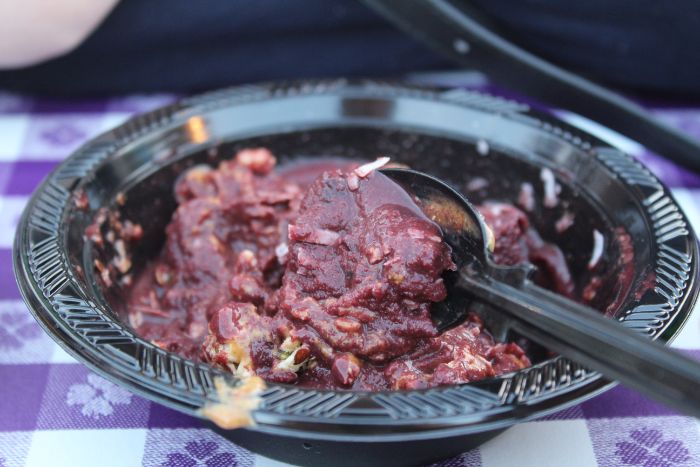 Like something from a smoothie place that neglects awesome ingredients like “frozen yogurt” or “fruit that tastes good.” Still, it ensures vegans have at least one option. In fact, they have two, but the other is better… 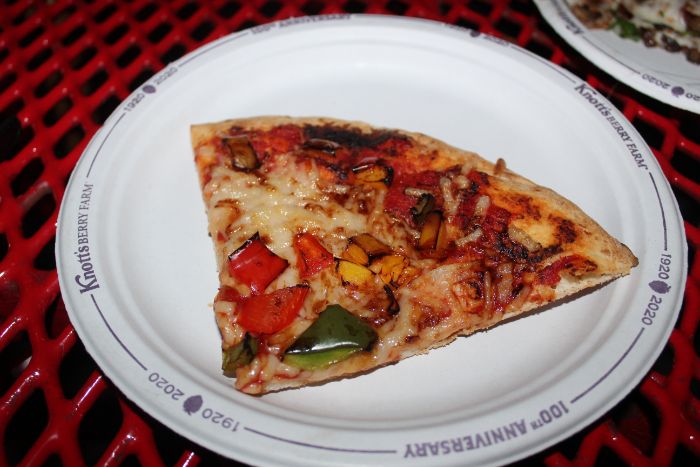 The description could maybe stand to be a little clearer here. The cauliflower is not a topping, but the crust. The topping is bell peppers and vegan cheese. Now, to someone expecting real cheese, it tastes a bit processed, like government cheese. But to someone who has had vegan cheese before — it is so much more like cheese than most. That I could even mistake it for processed cheese is a big step forward from the vinegared nut paste that usually passes at vegan joints. (A Knott’s spokesperson confirmed for me that it is vegan.)

Worst in Show: Veggie Sliders on a Pretzel Bun with Spinach and Boysenberry Aioli 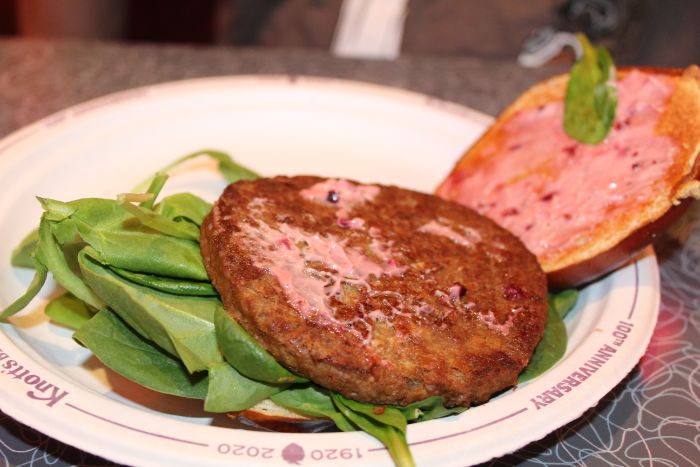 Whatever we expected from the description, it wasn’t a hockey puck of fake meat, thin spread of incongruously sweet garlic mayo, and leaves from a bagged spinach salad on a a dry bun. But that’s what it was. I don’t know if the aioli was vegan or not, but veggies should stick with the cauliflower pizza.

Most Divisive: Breaded Chicken Burger on a Glazed Donut with Cheese and Bacon 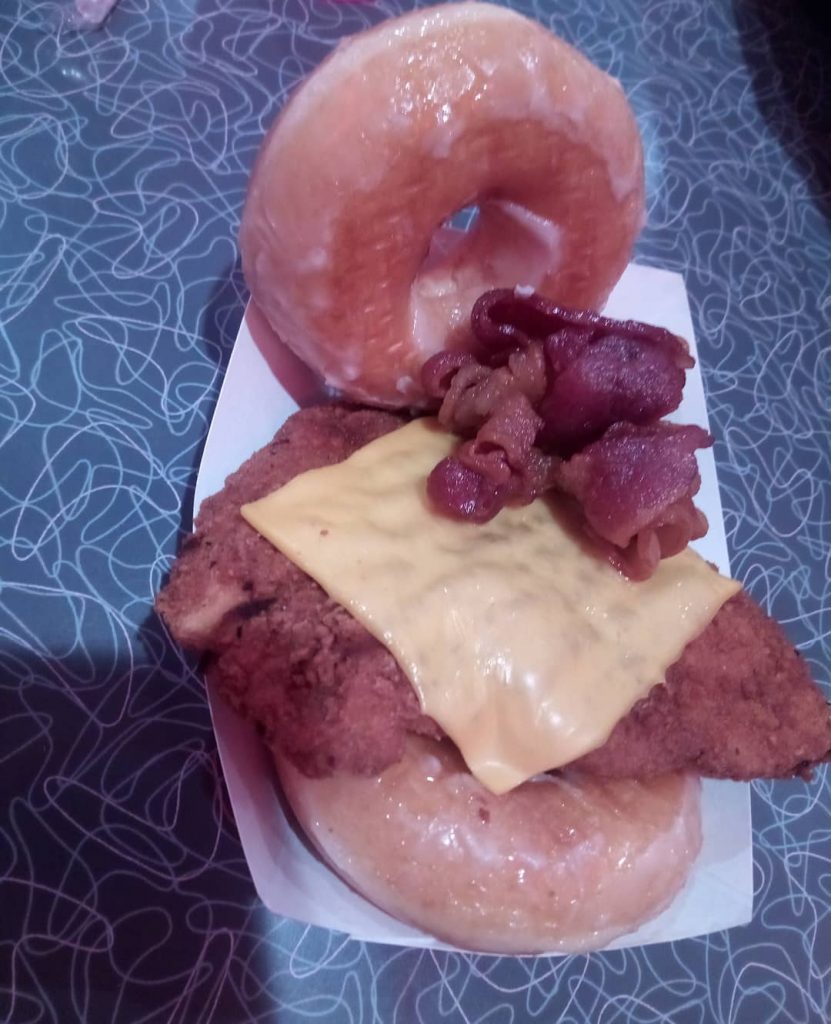 Formerly the kind of item strictly confined to county fairs, the donut chicken sandwich was briefly mainstreamed by KFC, and now Knott’s has its own version. Julia’s gag reflex was triggered almost immediately. I dislike bacon, but decided to give it a shot.

Here’s the thing: the donuts dominate, utterly. Take a big bite, and you taste pure donut glaze. The crisp-coated moistness of the chicken breast and slight toughness of the bacon register as textures, but they all taste like donut. Until you swallow it. Then there’s an aftertaste of bacon. The cheese does not register at all.

Minus the bacon, which I dislike, I would eat this item as a fun one-off. But be advised it is sticky as hell. And while Julia’s assessment is substantially lower, we both agree the chicken breast part was decent. Still, these were free and we were trying to taste as much as possible. So we did not finish this one.

Others, in brief: we both enjoyed boysenberry flavor Dippin’ Dots, were divided on the cakey (rather than donut-y) churro with boysenberry filling (great filling, churro itself divided), and enjoyed the peach and prickly pear aqua fresca, though we both thought it tasted more like regular ol’ pear than anything else. The big scoop of cookie dough in an ice cream cone looked like way too much, even next to the donut sandwich.

One more highlight of the anniversary celebration: several pop-up photo-spots that pay tribute to defunct rides, including the aforementioned dinosaur ride… 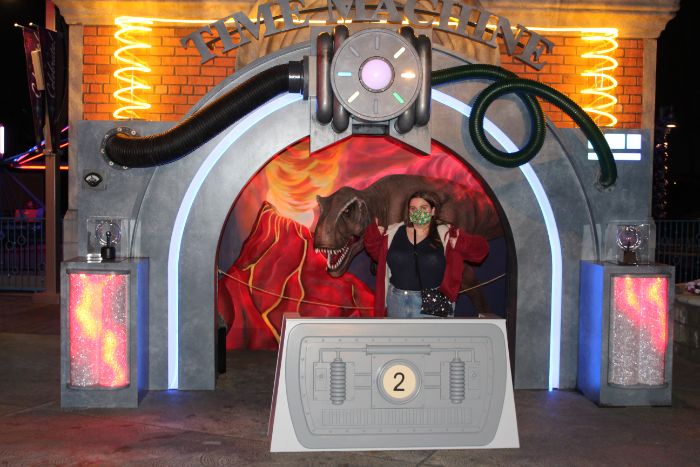 …and the trick-perspective Haunted Shack. 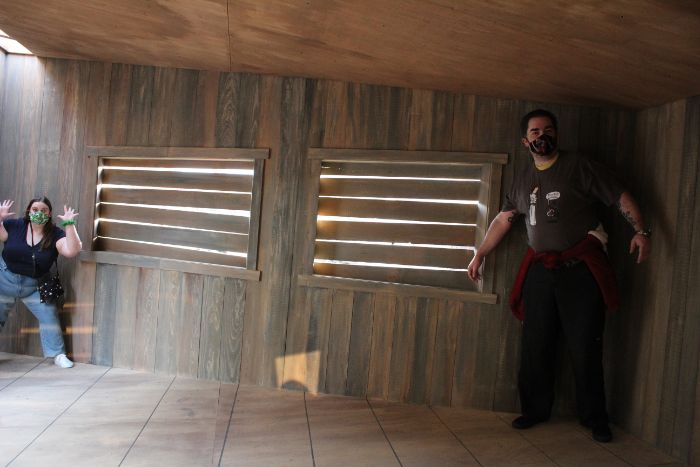 With collector pins also available now in the gift shops in limited quantities, Knott’s is clearly starting to play to the notion that they have longtime fans who care about the lore and history of the park. It’s a smart move. Generic rides may be fun a time or two, but it’s the theming and tradition that makes families want to go on the same ones year after year.

Good food doesn’t hurt, either. And the portions are better than a Disney’s California Adventure patron might expect.