Producing good science fiction, especially novel science fiction, is a hefty feat to attempt. Tackling noir and all of its trappings to make an engaging tale is, similarly, no small task. However, writers Kyle Higgins and Alec Siegel and artist Rod Reis—the creative team behind the acclaimed comic book series C.O.W.L.—don’t shy away from a challenge. In their new series Hadrian’s Wall, debuting next month from Image Comics, the trio weave a tale of a conflicted P.I. looking into a death in the far reaches of space.

I spoke with Kyle Higgins recently about the genesis of Hadrian’s Wall, how the series is a love letter to 1970s and 1980s sci-fi films, and how, at its core, the book is about relationships. 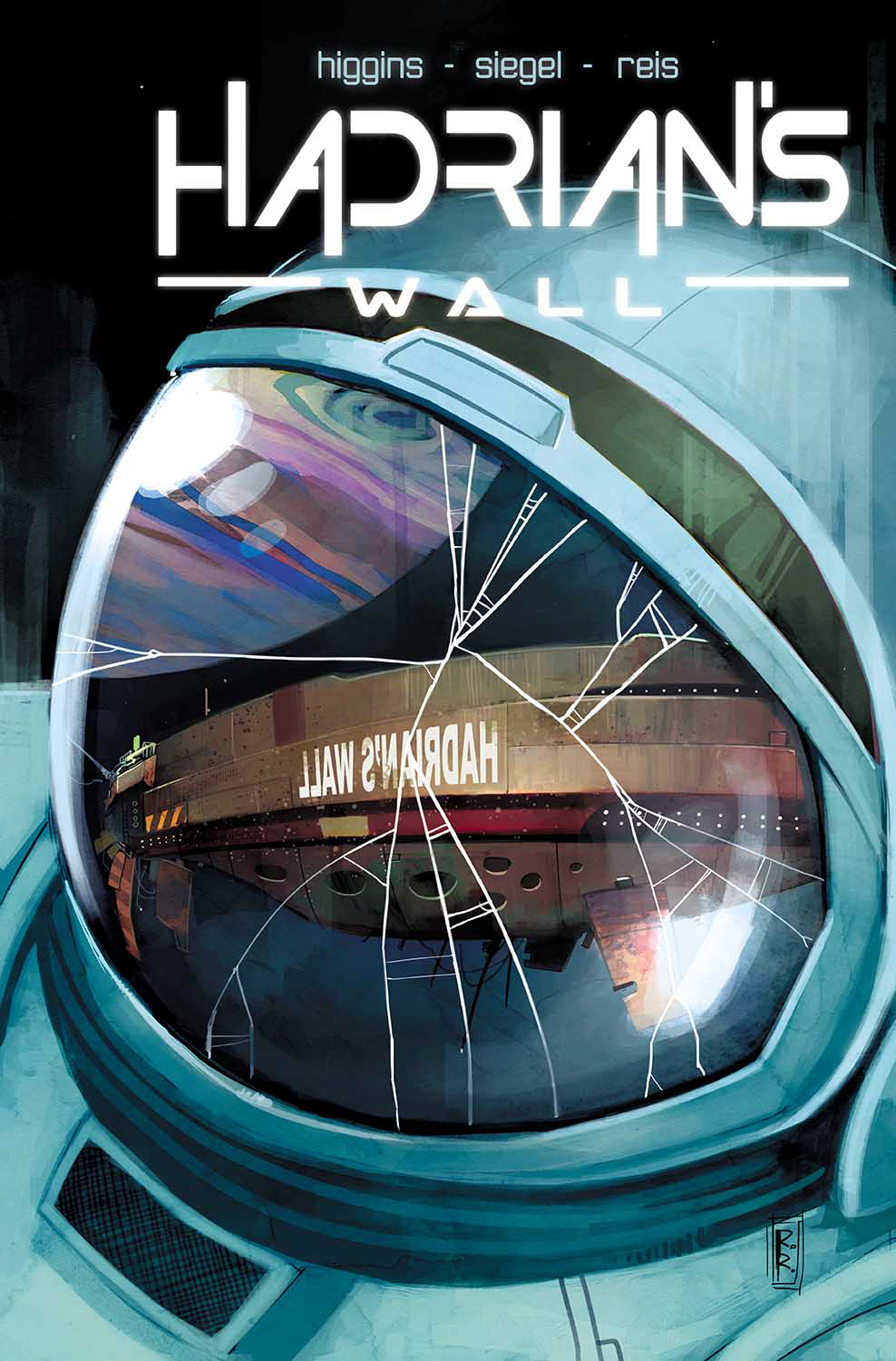 FreakSugar: What is the conceit behind the idea of Hadrian’s Wall?

Kyle Higgins: I would it’s an interstellar noir. It’s a locked-room murder mystery on a spaceship. It has drugs, murder, corruption, people with sordid pasts, an investigator who can’t trust himself. We’re following Simon Moore, who’s gone to survey a ship on the outreaches of space where an astronaut has died. He’s originally gone out under the pretense of rubber-stamping this death for the corporation who owns this ship. But we learn very quickly that Simon didn’t like this guy, and he didn’t like him because he married Simon’s ex-wife. Once Simon gets out there and realizes what’s going on, he not only has to find out who the killer is, but also navigate his failed marriage.

The backdrop to all this is a cold war between Earth and their biggest colony on Theta. At its core, the book is about failed relationships: what brings people together, what pushes them apart, and it’s all realized through the incredible lens that is [series artist] Rod Reis. He’s illustrating and digitally painting the entire book himself. For anyone who liked his work on [Reis, Higgins, and Hadrian’s Wall co-writer Alec Siegel] C.O.W.L., we think he’s a superstar in the making. We’re excited for people to see what happens when he cuts loose. 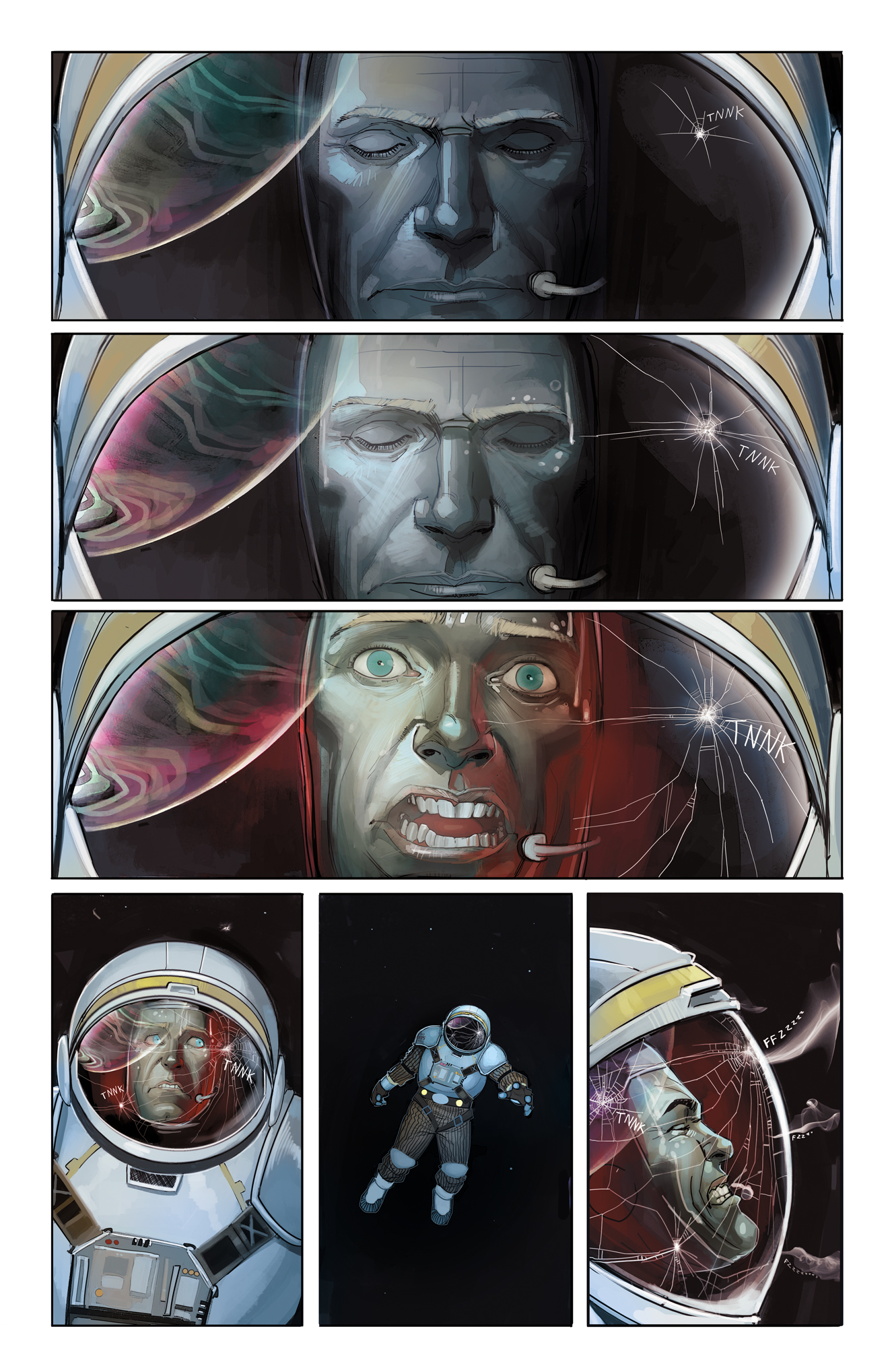 FS: One of the things that really stood out to me, which goes back to you saying Simon is sent to rubber-stamp the death, is the similarity between that and the Company in Aliens. I thought that was a nice nod to those 1980s sci-fi movies.

KH: You nailed it. Hadrian’s Wall is our love letter to 1970s and 1980s sci-fi films: Blade Runner, Outland, Alien, Aliens. We were very interested in telling a story in that vein, both tonally and aesthetically. In a crowded marketplace where there are a really good sci-fi books, we were looking for a way to separate ours and do something different. This idea of a retro-future as envisioned in 1985 was something that really intrigued us, especially when it meant that we could build it with Rod.

My background is in filmmaking as a writer and a director and those movies were really big for me growing up in a lot of ways that I wasn’t able to articulate until recently. They shaped how I see stories. Being able to go back and do something now in that vein has been a lot of fun. 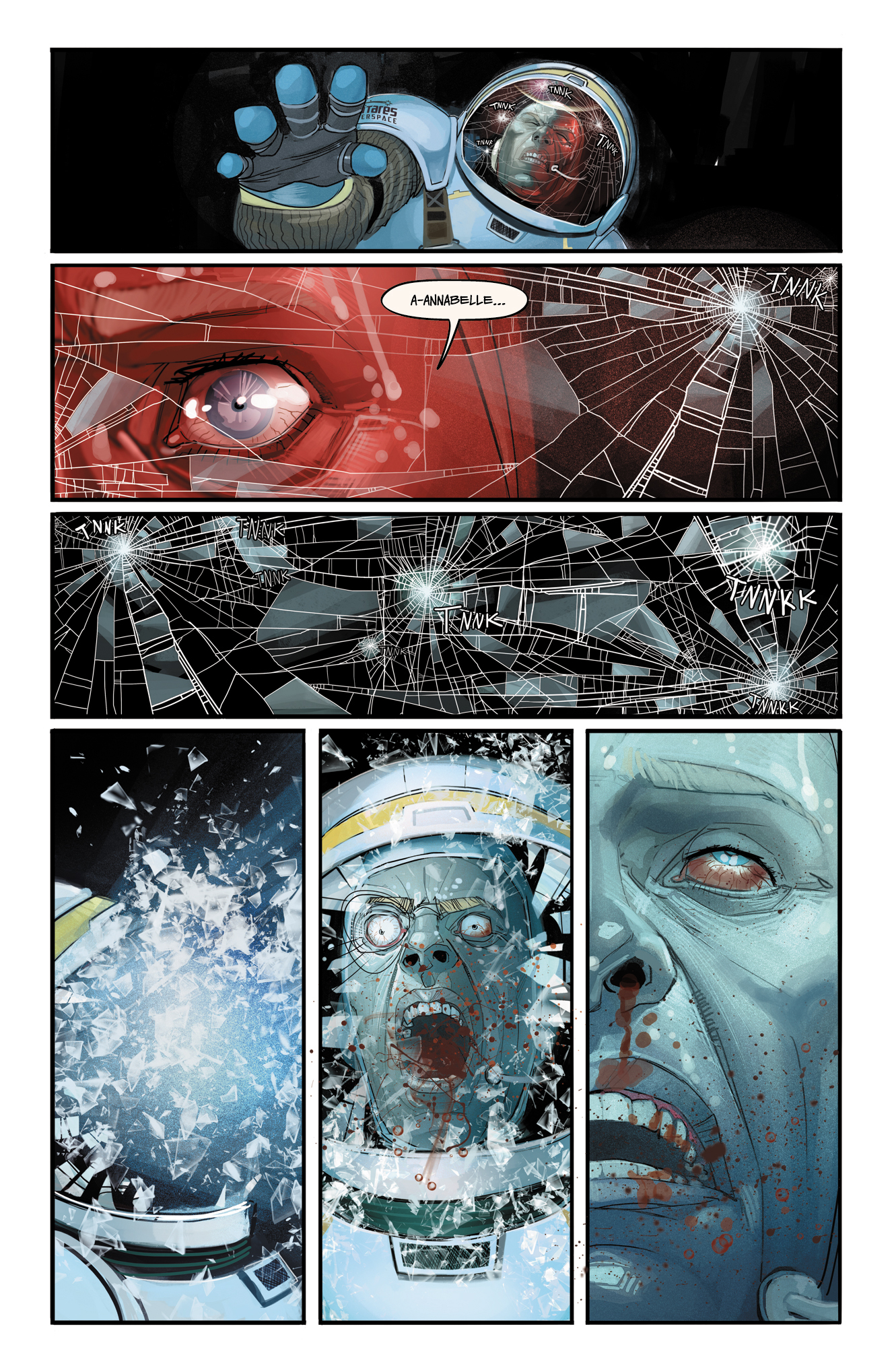 FS: The series seems to share DNA, in part, with other locked-room mysteries, especially some of Doyle’s stories and all the way up to a recent episode of Community. [laughs] Were there any of those types of tales in the back of your mind as your approached Hadrian’s Wall?

KH: None jump out to me, but movies like The Big Sleep and The Long Goodbye, Casablanca, The Maltese Falcon—classic noir stuff—has always been very interesting to me. We’re kind of mixing genres here.

FS: You touched on how the three of you decided to make the book, aesthetically, look like a vision of 2085 as envisioned in 1985. I was wondering if you could speak more about the conversation of how you wanted Hadrian’s Wall to look.

KH: Alec is a big sci-fi guy as well. He’s also a big NASA and space exploration fan. He put together a lot of reference material for Rod: concept art pieces and film stills, but also space drawings and architectural pictures. That was just to get the ball rolling.

That started things and then, from there, Rod took over and did different character studies and location studies. He rendered several different versions of the ship until we settled on one we really liked. It was a very much a collaborative process through and through. 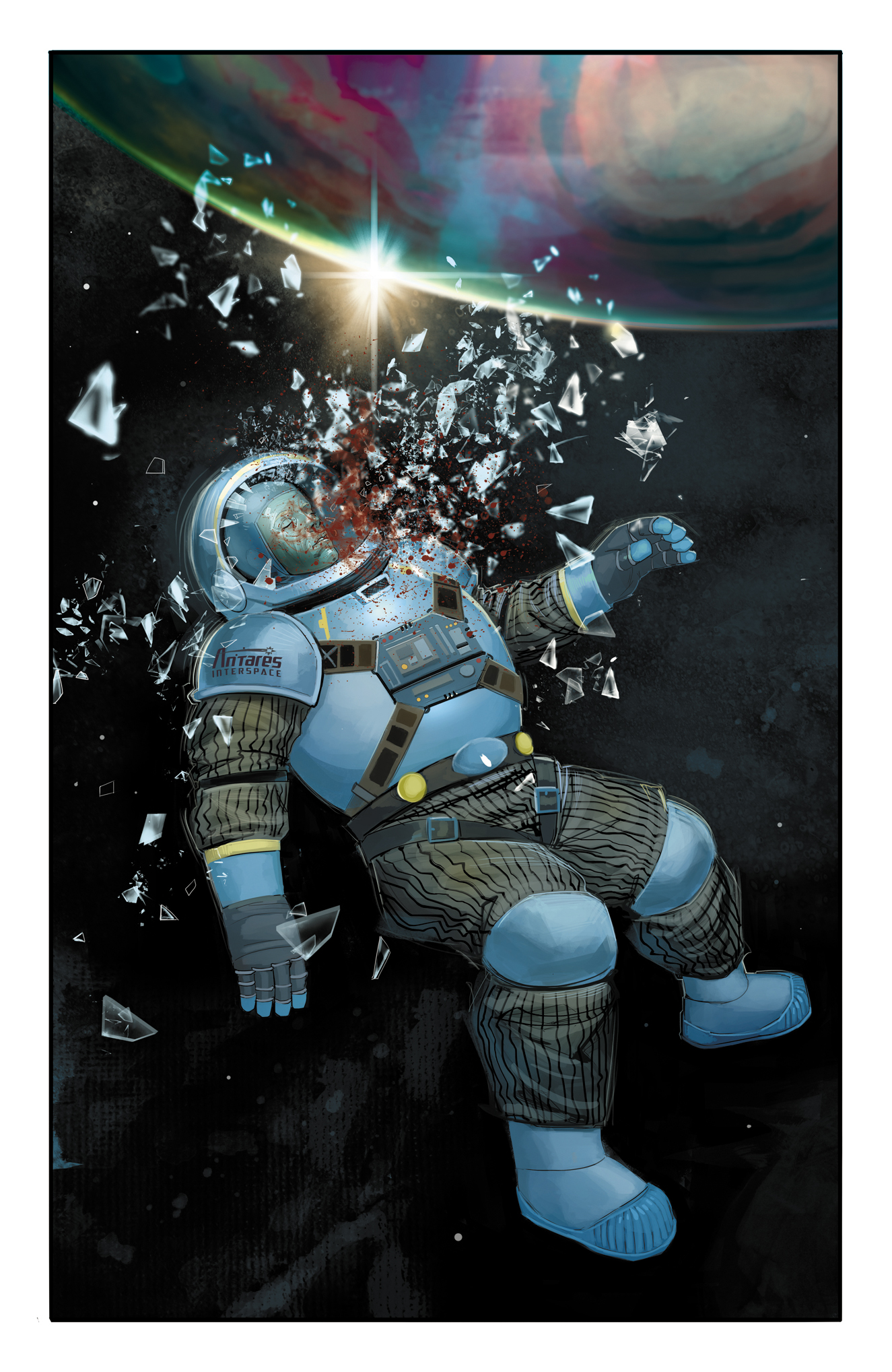 KH: That’s a really good question. It’s a retro-future. It’s a cross between retro-futuristic and dystopian. There are flying cars and corporatized space travel. I think in many ways that the fantastic has become mundane. There are fewer tensions between countries on Earth because they’re united in their tensions against Theta. It’s the classic idea of a new enemy bringing enemies together.

FS: Kind of like a refocused Other with a capital O.

KH: Exactly. I’d also say that, although we don’t see it in the story up to this point, what brought Earth together was colonizing space. The preamble at the start of issue 1 is the idea that in 1985, nuclear bombs dropped in Moscow and New York. Afterwards, the United States and the Soviet Union came to peace through a joint effort to colonize space. It’s kind of like having a baby to save the marriage, right? [laughs] 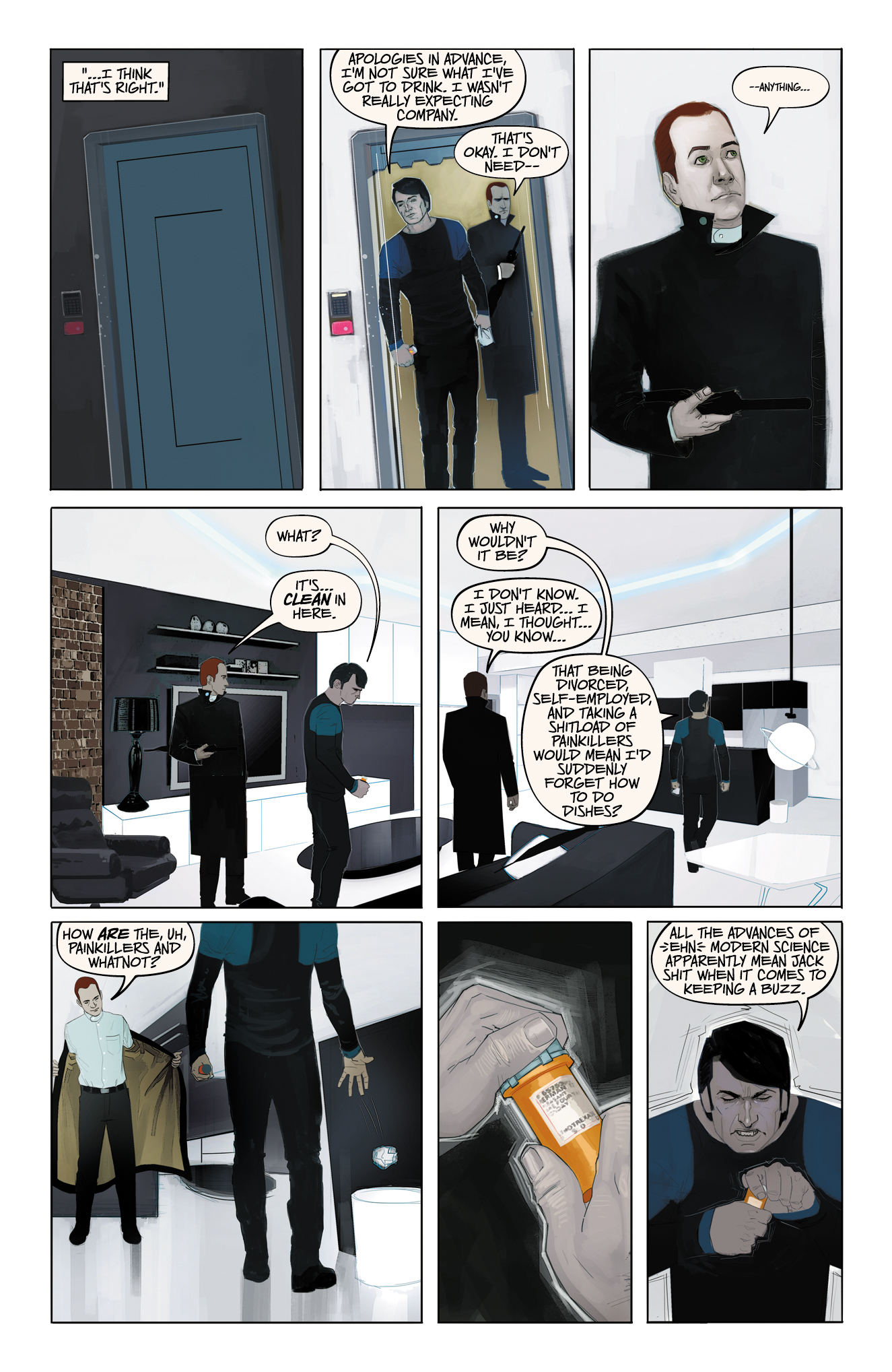 FS: I noticed on your Facebook page that you’ve spoken a lot about the movie The Shadow Hours premiering. I was wondering if you would like to talk about that.

KH: For those who don’t know, The Shadow Hours is a new film that I just wrote and directed. It stars Tom Riley from Da Vinci’s Demons and Britt Lower from Man Seeking Woman, Loren Lester—who, to me, will always be Robin/Dick Grayson from Batman: The Animated Series—and Elisabeth Hower, who was in my favorite episode of the first season of Louie.

It’s about these identical twins with a very rare condition where only one can be awake at a time. They pose as one person and each stay awake half of each day. They leave recordings for one another to assist in their work as private investigators. The one brother has a secret relationship on the side and she’s putting to the screws to him that he needs to make a choice between her or his brother. It becomes a moral quandary, as the only way to get out of this dynamic is for one of the brothers to die.

It was my return to big short-film making. I hadn’t made anything in about seven years. I woke up one day and realized that it had been that long. A) I wanted to see if I could still do it the way I thought I could and b) I wanted to rededicate myself to that craft. Filmmaking is my first love. So I put together this project. Omar Spahi, who’s a friend of mine, executive produced it. Omar is also producing Hadrian’s Wall through his OSSM Comics line.

We went out and shot it last year. Cut it. Bear McCreary did an incredible score for us. We just had the had the premiere at the HollyShorts Film Festival. You can check out the website www.theshadowhours.com. There are stills and information about the film. We’ll be updating as new screening dates pop up. 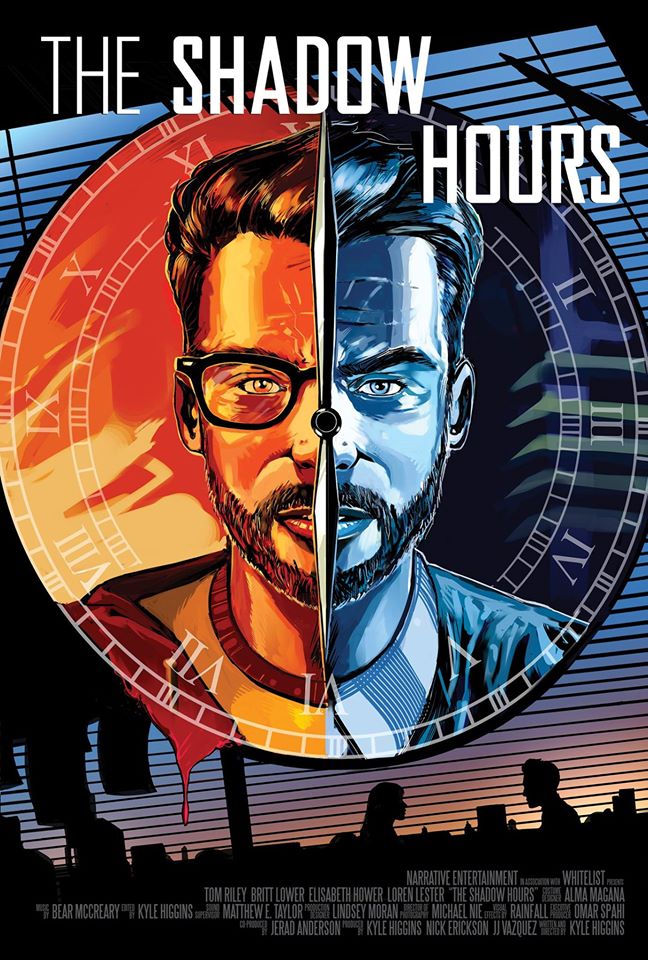 FS: Is there anything you want to tease about the overall story going forward beyond issue one of Hadrian’s Wall?

KH: Like any great murder mystery, the twists will keep on coming. I feel pretty confident in saying that just when you think you’ve got it figured out, we’ll be pulling out the rug from under you.

Hadrian’s Wall #1, written by Kyle Higgins and Alec Siegel with Rod Reis on art, is on sale September 14th from Image Comics.

A note to comic book retailers: The final order cutoff deadline is this Monday, August 22nd.

From the official issue description of Hadrian’s Wall #1:

When an astronaut on HADRIAN’S WALL is murdered, pill-popping detective Simon Moore is dispatched to investigate the ship’s crew… including his own ex-wife. But if Simon’s not careful, what he finds could make the interstellar Cold War go red hot. From the creative team behind the critically-acclaimed series C.O.W.L. comes a gripping, locked room murder mystery where the secrets of everyone involved are as dark as the space that surrounds them.