What are the pitfalls and traps that hamper our lives and hold us back? How do our personal experiences impact whether we excel or fall? These questions are explicitly and implicitly addressed in The Trap, a 120-page sci-fi graphic novel written by co-creators former Chicago Bears linebacker Lance Briggs and comic veteran Kyle Higgins, with art by co-creator Danilo Beyruth, colored by Tamra Bonvillain, lettered by Hassan Otsmane-Elhaou, with Sasha Head contributing to the design of the book.

The Kickstarter to make this comic book a reality launched a few days ago, with the campaign well on its way to being funded. In The Trap, Jaylen, a Chicago teen who is rising in the futuristic sport of surfriding, falls prey to a mistake that might cost him his dreams of being a sports star.

Mr. Briggs and Mr. Higgins were kind enough to speak with me recently about the conceit of The Trap, the characters that populate the world they’ve created, the Kickstarter itself, and how their personal experiences have impacted their tale. 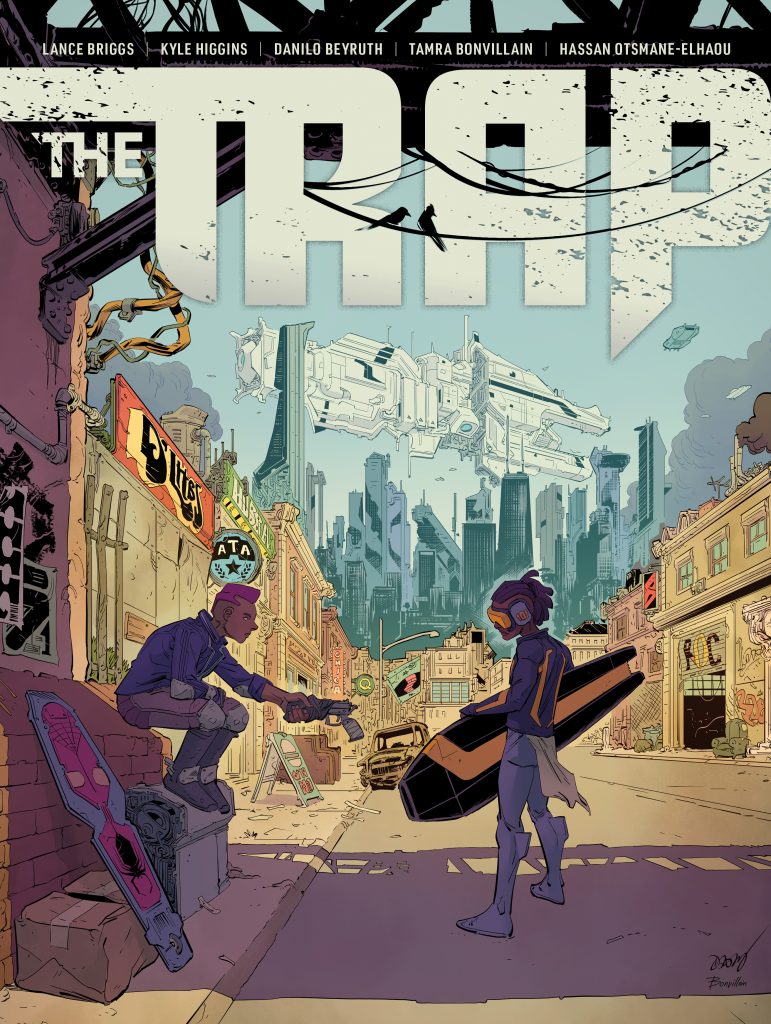 FreakSugar: For folks who might be considering checking out the Kickstarter, what is the conceit of The Trap?

Kyle Higgins: The Trap is a science fiction graphic novel about a version of the future where Earth has been annexed into an interstellar coalition of planets. However, generations later, we’ve become both the red headed step child of the coalition as well as a valuable resource in the interstellar drug trade. The book is an opportunity for Lance and me to explore issues that are close to our hearts, through the fantastic.

Lance Briggs: Our main character is a sixteen-year-old rising star named Jaylen in the futuristic sport of surfriding. He lives in Chicago, and while surfriding looks to be his way to a better life, the challenges and traps of his current life may have something to say about that.

KH: Right. Days before a huge race, Jaylen — needing to make repairs to his surfriding board, but having no money or options — agrees to an “easy job,” boosting the floater car of an Alliance Senator who has come back through Chicago. The job goes horribly wrong, though, and Jaylen accidentally shoots the Senator.

LB: So then the question is, will the community rally around Jaylen? Or will his career — and his life — fall victim to The Trap? 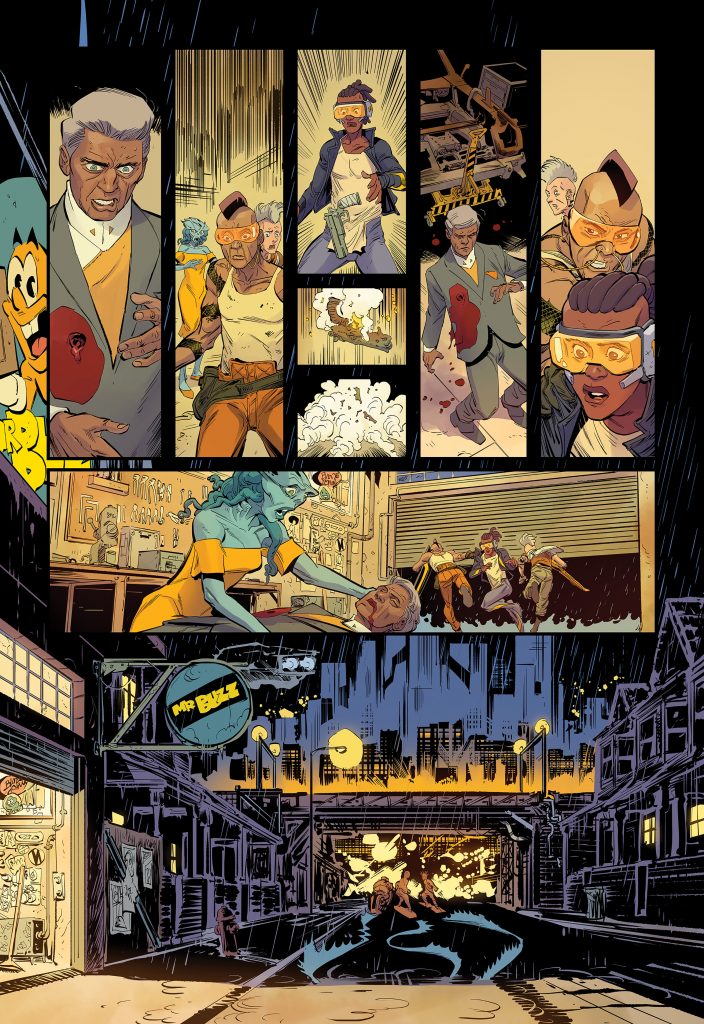 FS: The idea behind The Trap seems to pull from a variety of storytelling traditions. What can you tell us about the inspiration behind the tale?

KH: Honestly, so much of this comes from shared interests as different life experiences. When Lance walked me through what his childhood and formative years were like, I was really taken by it. The best science fiction — which is a genre that we both love — is allegory. And so, the setup we’ve built here and the story we’re telling within the world, are a direct result of that.

Also, from a visual standpoint, [artist] Danilo [Beyruth] and [colorist] Tamra [Bonvillain] have brought an almost European sci-fi look to this series, which has also helped to influence certain story choices. Comics are such a fantastically collaborative medium, I love the way a book becomes a direct result of all the creators’ specific loves and influences.

FS: You’re creating a robust world with The Trap. Who are Jaylen and the people in his world?

LB: Jaylen is a sixteen year old boy who’s a product of the streets formerly known as Chicago. But, Jaylen is a sensitive soul — and he’s also immensely talented in the sport of surfriding, despite being born deaf and blind. He relies on a visor that helps him to see in VR and hear over long distances. He hopes to make it big in the sport one day, hoping to be cheered for something he does well rather than pitied for his deficiencies. With rare ability on the board, Jaylen is determined to become a star. After all, becoming the top surfrider on the planet would immediately be followed by fame, fortune and a one way ticket off the planet.

On the home front, Jaylen is predominantly raised by his best friend’s mother. This friend is named Kazimier, and he’s also a surfrider, though not nearly as talented.

Unfortunately, it’s Kazimier’s older brother — Saigee — who gets Jaylen mixed up with the floater job.

The main gang leader in with Midwest is a being named Zanzibar, who is an alien that identifies as both male and female, cross dresses, and walks softly… but carries a big stick.

KH: So, Saigee isn’t a part of Zanzibar’s gang, but he is mixed up in other types of illegal activities. Like boosting floater cars to strip them for parts.

LB: Right. But when Zanzibar — who knows of Jaylen and likes him, and wants better for him than this kind of life — finds out what Jaylen has gotten mixed up in…

KH: Things really come to a boil. Especially with an Alliance Investigator — who also used to be a surfrider — named August Raines, who has come to Chicago to get to the bottom of what happened with the Senator. On top of the rival gang leader, Chalk, who has his own reasons to suss out what has happened, too… 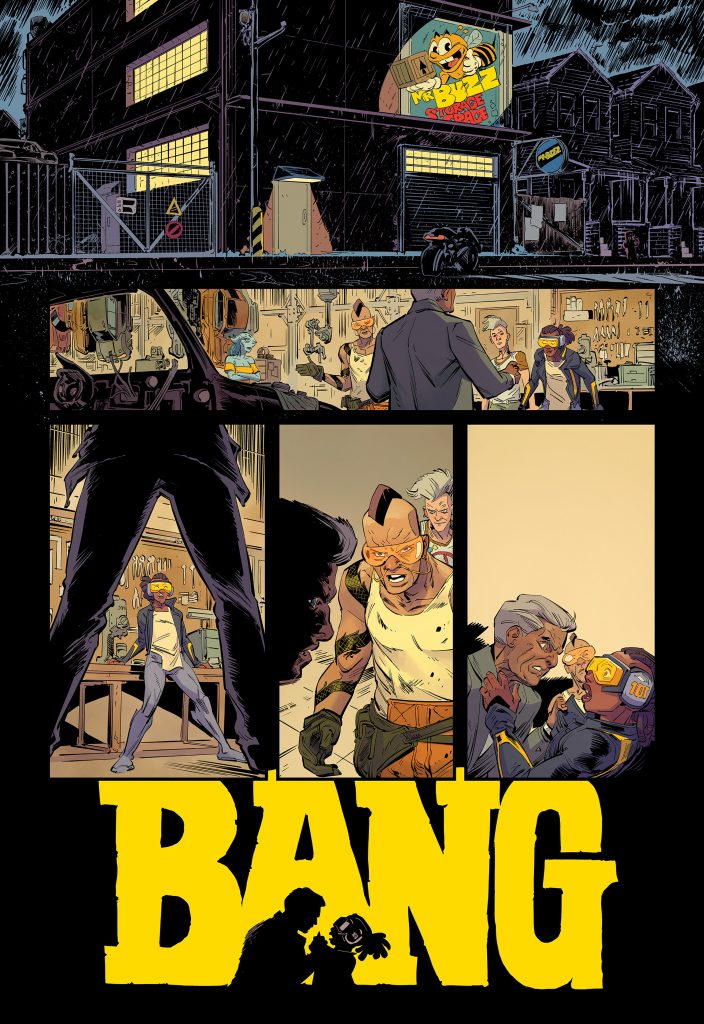 FS: The Trap is a work of fiction, but it also seems to pull from personal experiences. What do you all bring to The Trap from your own worlds?

LB: I grew up in environments like this, without the science fiction. So, a lot of the personal and emotional center of this story. I won’t say it’s my life exactly or anything like that, but my background definitely is an influence.

FS: How did all of you come together to work on this project?

KH: Lance and I have known each other for years — through a shared love of comics, football and the Chicago Bears. We stayed in touch and about a year and a half ago, started meeting to see if there might be a creative partnership in our future. Spoiler alert — there was. [laughs]

Danilo Beyruth is represented by one of my favorite people in comics, Joe Prado, who works with a lot of Brazilian artists… including a number of artists I’ve worked with over the years. I reached out to Joe when we were looking for an artistic partner. I really loved Danilo’s work over the years, and the fact that he was both interested and available… along with Tamra Bonvillain, who’s one of the top colorists in our industry, was super exciting. 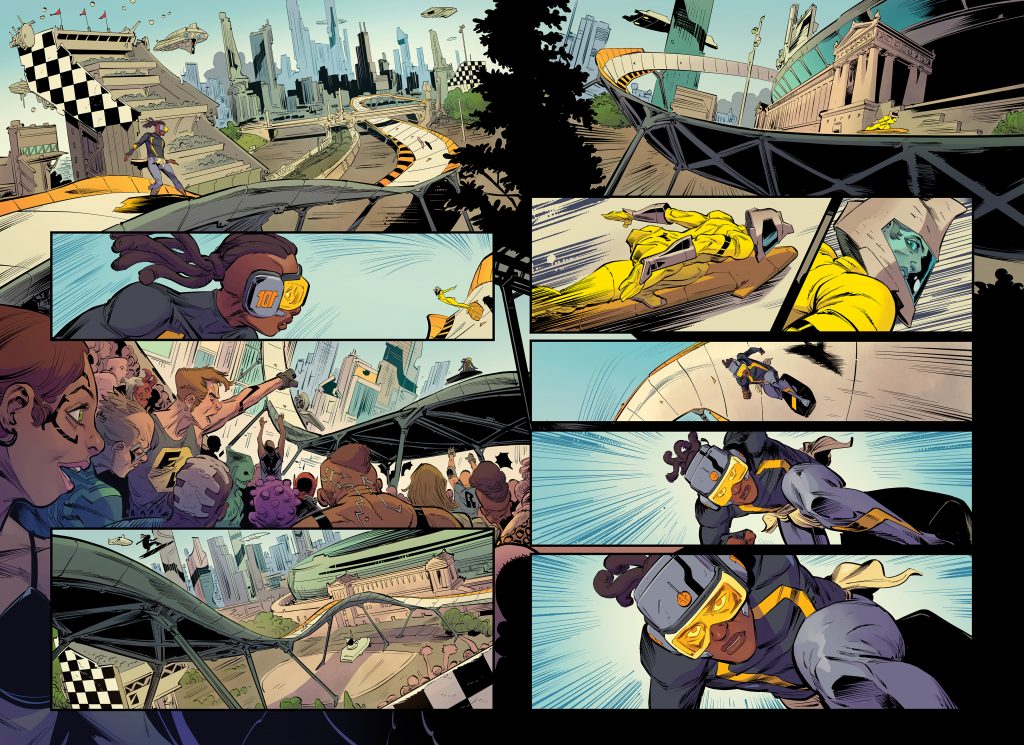 FS: On to the Kickstarter, what can you tell us about The Trap campaign?

LB: Well, first and foremost, this book doesn’t come to be unless this Kickstarter succeeds.

KH: Right. The book is not done.

LB: But beyond that, we wanted to make sure that we had a wide range of tiers. The entry point is really accessible — $10 for a digital copy of the book. Above that, we’ve got different hardcover, prints, book plates, commissions and even some memorabilia tiers.

FS: Do you see more stories from the world of The Trap beyond this initial Kickstarter?

LB: One hundred percent. This is the tip of the iceberg, in our minds. But none of that is possible if we’re not able to make this book first.

FS: If any of our readers are thinking about backing the Kickstarter, what would be your pitch?

KH: This is an incredibly personal passion project for all of us. We’d be honored for readers to give it a look and consider helping us bring it to life.

The Trap Kickstarter campaign is live now, with 22 days left and the campaign about two-thirds already. Click here to learn all about it, how to contribute to the campaign, and all the fantabulous rewards available to backers!

In THE TRAP, Jaylen Robinson is a rising sports star from a not-so-great part of the galaxy: Earth. He’s worked hard his whole life. Everyone’s saying that Jaylen is the Next Big Thing for the interstellar sport of the future: surfriding. The future is his. This is his chance. Until it’s not.

Days before a big race, everything changes. Jaylen’s surfrider board needs to be repaired but he doesn’t have the money and he doesn’t have very many options. He’s desperate —  desperate enough to agree to boost the ship belonging to one of Earth’s Interstellar Senators. But when the job goes wrong and Jaylen Robinson accidentally shoots the Senator, his once-promising sports career threatens to succumb to The Trap.

For former NFL star Lance Briggs, THE TRAP is a passion project, inspired by his life before becoming a seven-time Pro Bowl linebacker. “Before I played professional football, my life was very different,” says Briggs. “I grew up in Sacramento, CA during the 1980s and 1990s, with my mother and two older sisters. But while many people hear “Sacramento” and associate it with a place of power and decision making in the state of California, the reality— for many of its residents— is anything but. Our family struggled no differently than most in the south area. There were times when the pantry was bare and the fridge was empty. Days or weeks without power. Waking up to cold showers before school. For those of us who came of age in an environment like this, we have a simple name for it: The Trap. Put simply, the name translates to a community that has been failed by its governing bodies. The Trap is both a neighborhood and a resulting way of life— a system designed to keep you from succeeding.”

“The best science fiction is allegory,” said # 1 New York Times bestselling writer Kyle Higgins. “And while the world of THE TRAP has many extraordinary elements— technology, sports, species and interstellar status quo— at its core it is very much an opportunity to explore the different challenges that we face, as we try to save those who come after us from repeating our mistakes.”

Briggs and Higgins have been working on the story of THE TRAP for the last year and a half and have assembled an amazing creative team, co-creator and artist Danilo Beyruth, superstar colorist Tamra Bonvillain, letterer Hassan Otsmane-Elhaou and designer Sasha E. Head. THE TRAP will be presented in an oversized, deluxe format hardcover  (8 ¾ x 11 ⅝ ).

THE TRAP is a fast paced epic about making mistakes and the need for second chances, set in a world where hard work and talent is anything but a guarantee for success.