Now more than ever, our culture seems to have an obsession with reinvention and transforming ourselves to be something different or something more. Not only do we see the pervasiveness of this idea in reality television, but humans have been starting over in new cities and new locales in order to make a fresh beginning and becoming who they want to be.

In Lee Bermejo’s new book Suiciders for DC Comics/Vertigo, the writer and artist of the series examines how Los Angeles and its people recreate themselves following a devastating earthquake and a secession from the United States, walling the city off from the rest of the nation. The story is told against the backdrop of this futuristic city and gladiator games between body modified fighters known as Suiciders. Mr. Bermejo spoke to FreakSugar about the world he’s created, immigration, and the nature and desire for reinvention found everywhere across the globe.

FreakSugar: How did you come up with the idea of Suiciders? When reading it, it’s apparent that you’re really passionate about issues of social justice, immigration, and pride in one’s community.

Lee Bermejo: Oh, man, there’s a couple of different things. The first is that the issue of immigration in general is something I’m really interested in. I’m an immigrant myself; I moved from the United States to Italy 11 years ago. So that experience in and of itself, moving to a different country and dealing with a certain amount of bureaucracy to make that work, and then seeing that reflected in the headlines so much. I grew up in southern California, so of course that issue is big for us: immigration and illegal immigration, specifically. Here, there are boatloads of North Africans that are making their way into Europe practically daily.

And it’s just something that’s dominated the news. I think it’s that the world we live in is not only smaller because of social media and how quickly information is disseminated, but also the world is becoming smaller because people are moving. It’s a sociologically interesting phenomenon, I think, that’s not necessarily new, but it goes in waves. I think we’re passing through a moment right now where a lot of people are leaving their home countries and searching something new in other places. So that’s something I want to look based on my own personal experience and interests I have.

But when you set out to do a book, something that excites you from an artistic point of view and a creative point of view, you want to do something that features visual stuff that’s fun for you. I’m an artist first and foremost, so I want to draw something that has something visually interesting and dramatic and thematic possibilities. This concept of this game, this Suiciders game, it felt interesting to me because it was also a way for me to visually, literally capture some of the violence that some characters might be feeling internally in other ways. 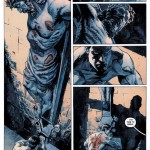 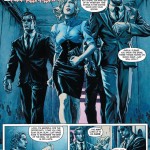 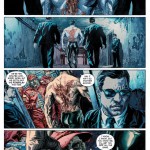 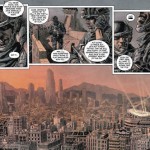 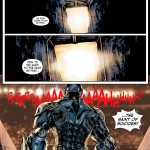 FS: It’s interesting how you talk about the world getting smaller. In the news, you see a lot of jingoism. Do you think the characters living in New Angeles in Suiciders have that sort of love for the city after the secession of Los Angeles or that they use it as a coping mechanism?

LB: I think that first of all it’s something that you see in a lot of cities. People are proud of where they come from. Growing up in LA, you have people who are specifically proud of their neighborhoods. You have people who are specifically proud of coming from a certain place that gives them a sense of belonging. So I think that there’s that to it, but I really wanted to dramatize and make it a little bit more fantastical. You have this city that survives after a huge earthquake and it’s rebuilt itself in the image it wants to have.

So, part of the second story arc deals with a social purge. At a certain point in time, they start construction of this wall, which is there in the first story arc. You have guards who are patrolling it. As the story progresses, you’re going to see how this wall was constructed and why. And you’re going to see that there’s very much this idea of being able to create yourself in the image you want to, which I think is something particular to LA. I think people move to LA to reinvent themselves. I think the same can be said for most big cities in general, but LA has that entertainment side of it too, where people go there to recreate themselves. That’s what I feel like the people of New Angeles did. They were like, look, we’re going to recreate ourselves as the best possible thing we can in our minds. And while on the outside, a lot of that stuff might seem perverse and disturbing, to them it’s a source of pride.

FS: You were mentioning reinvention and there’s a lot of talk in the book about body modification. Some characters have two or three body mods. Was that your intent to speak to the culture that we live in now, not just in LA, but some of the reality shows that are about reinvention?

LB: Yeah, and I don’t think it’s specific to Americans. You see it here [in Italy]. It’s something people all over are interested in. At a certain point, I can see us arriving at a place in time that’s more pervasive. If there’s such a thing as abdominal implants, how long before we get to a point in science where we can give people stronger legs, you just have to pay for it. It’s something that I think it’s thinking something useful to look at in this world of futuristic gladiators. I think that would be something they would very much utilize. You essentially have these supermen, for all intents and purposes.

So there’s definitely an aspect of that, where I’m drawing on stuff around me. But by the same token, I don’t want it to make it seem like that in every scene in the book I’m trying to make some kind of social point. It’s also me trying to have fun with a concept, that’s slightly sci-fi in nature, to get to play with characters who, aesthetically, you get to make in cool body armor and make physically perfect specimens, quote-unquote.

FS: That’s another thing I appreciated about Suiciders, that you didn’t have characters with just one body type. It was visually kinetic and varied. The art and world felt very lived-in and real.

LB: Thank you. That’s one of those things that you hope that comes through, but you never really know if it will. That’s the trick about this book in general for me. More so than it being about these super-cool, futuristic gladiators, it’s about a world, this post-earthquake city I’ve created. It’s inhabited by a lot of people. I prefer to think of it like Sin City. Sin City’s a place with all these different types of characters and [Sin City creator Frank] Miller was able to play with a lot of these different ideas within the rules of that world. That’s what I’m really hoping to do here as well.

FS: Throughout the book, there’s boasts about secession and there’s a lot of city pride. There are a tons of people who want to reinvent themselves after the devastation of the earthquake. How does the rest of the United States view the secession? Do the people see Los Angeles as having seceded? Do they see the city as being cut off? Will we get to see their take on New Angeles?

LB: Oh yeah. Without really getting too ahead of myself, the second story arc deals with that, in the sense that you get to see outside of New Angeles. And I have to say there’s a healthy amount of satire in this, I hope. Maybe not wearing it on my sleeve, but my editor at a certain point said, “This reminds me kind of the first RoboCop, where it’s satirical, but they’re playing it super straight. And that’s what I’m trying to do. And the way the U.S. views New Angeles and vice versa should have a healthy dose of satire to it. But you will definitely see that. And if I’m lucky enough to get there in future arcs, I’m definitely going to be dealing with the earthquake itself, which I think is hugely important. You know, you’re starting with a story here that takes place after this earthquake, so there’s a lot of questions about, and purposely so, how this city got the way it is.