Writer and artist Lee Bermejo is one of the hardest working creators in comics. I suspect he must suffer from insomnia like Fight Club’s put-upon narrator, because otherwise I don’t know how he manages to do the sheer amount of work he produces. In addition to his work as writer and artist of his DC Comics/Vertigo series Suiciders, he creates beautiful covers, such as the rare alternate cover he produced for the first issue of Dark Horse Comics’ Fight Club 2 #1 by original writer Chuck Palahniuk. Mr. Bermejo took the time to speak with us about his involvement with the project and how Mr. Palahniuk and director David Fincher have influenced him as an artist. 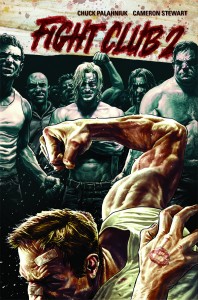 FreakSugar: How did you become involved with Fight Club 2?

Lee Bermejo: Through [Dark Horse editor-in-chief] Scott Allie. He contacted me about doing a cover and, of course, I jumped at the opportunity. The [first] movie and the book had such an effect as an artist just starting out. I was with Wildstorm at the time and it had such a huge impact. And it introduced me to Chuck’s other novels as well. That really got the ball rolling for me in that regard.

FS: How do you think the book and the movie affected your artist’s sensibilities?

LB: You know, I have to give credit where it’s due to [Fight Club movie director David] Fincher. I’m such a huge Fincher fan. The way the movie was shot, it’s a ballsy movie. It still is to this day. Visually, it hit me pretty hard. There were some movies that were coming out around that time, not necessarily in the same moment, that had this wicked sense of humor: American Psycho with Christian Bale, Fight Club. They had this pitch black sense of humor that I responded to and incorporated into my own work as well.

FS: And it’s interesting that you mention the color and look of David Fincher’s films because even if you didn’t know he did a film, you can totally label it as his because of his use of muted colors contrasted with darks and brights.

LB: And he shoots in such a particular way, too. He doesn’t like to see the actor’s eyes. He’s one of those few directors that still has that 1970s sensibility. He really lets the actor’s performance tells the story. He doesn’t do a lot of close-ups and get in there to see the actor emoting like a lot of other directors do. I really respond to that and, like you said, you don’t need to know he did the film because it’s so visually recognizable.

FS: One of the reasons I bring that up is because you have a very distinctive style. When I was still getting familiarized with your work several years ago, you can look at your work and know it’s yours.

LB: That’s cool. Thank you. That’s the ultimate compliment. I think every artist aspires to have their work recognizable. That’s awesome to hear and I appreciate that. You know, it’s something I try hard at, too. I want my work to have a distinctive feel to it. It’s not for this reason, but I don’t sign covers or art that I do. Part of it is for plausible deniability. [laughs] Nope, that wasn’t me! [laughs]

FS: What inspired how you approached the composition of the alternate cover?

LB: I just really wanted to do something that was brutal without showing the real brutality. I wanted to try to do something that had this feeling of intensity. I didn’t want to show blood. I wanted it to be sweaty and intense. And so, for the composition, in my initial sketch, I didn’t even have Tyler Durden in it. That was something that Scott asked me to add in later. I was going for something, not necessarily vague, but I didn’t know how much they wanted to reveal about the involvement of Tyler. I had seen a couple of sketches and worked with them. I knew I wanted to have an audience of characters watching him and that’s where the composition came from.

FS: Another thing I responded to about the cover was the contrast between the colors and the greys. It’s very stunning. Was that a deliberate in order to show the shift in perception of reality that we see in the Fight Club universe?

LB: That wasn’t actually the reason behind it. The reason was color theory. It’s just trying to push background characters into the background using cooler colors and making the foreground figures pop. So, I wish I could have a more philosophical response, but it was more about doing that contrast. [laughs] I really like color contrast quite a bit, the contrast between warm and cool elements.

FS: The cover made me think how Fight Club and Fight Club 2 explores themes of reinvention through violence and taking philosophical ideas and exploring them through that lens. I appreciate how there are parallels between Fight Club and your DC Comics/Vertigo book Suiciders.

LB: That’s very cool. I really have to say that the ideas that are present in Fight Club are certainly things that have influenced me. It’s no big surprise that they’ve influenced Suiciders. The book and movie had such an impact on me. Reading the book, you know how you see a movie before you read a book, you take those actors and characters with you? And vice versa. And it’s like with Cormac McCarthy’s The Road. I read the book long before I saw the movie. I love the movie, but I never saw the main character as Viggo Mortensen. But in Fight Club, I saw the movie first and then read the book and it was the first time that I saw the book’s characters completely differently than how they were portrayed in the film. It’s a testament to Chuck’s writing that he had me so immersed in his world, separate from the film world.

FS: Do you have any other alternate covers you’re doing for the miniseries?

LB: Not at the moment. If they called me, I’d be more than happy to do more covers. Obviously, I had a blast doing this one. Mainly just focusing on wrapping on the first arc of Suiciders.

LB: [laughs] I appreciate that. Scott is a fantastic editor and one of those editors in comics that people should point to and say, “Look at what this guy is doing. Look how he approaches the job.” He’s one of the best, I think.