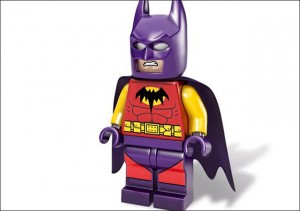 Happy Post-Batman Day! At participating comic book shops across the country, retailers were giving away free Bat-swag in commemoration of the Dark Knight Detective’s 75th anniversary. The San Diego Comic Con (SDCC), naturally, also got in on the celebration of All Things Batman by giving away an exclusive LEGO mini-figure of one of the most crazy-cakes versions of the Caped Crusader: The Batman of Zur-En-Arrh.

The look of the mini-figure hails from a story by writer Grant Morrison, “Batman: R.I.P.,” in which the Batman has been driven mad by an organization known as the Black Glove. Luckily, as anyone who has even the slightest familiarity with the Dark Knight knows, our hero plans for everything. (To wit, one of Batman’s colleagues once noted: “Does Batman ever not have a plan?”) Hence, the Batman of Zur-En-Arrh. Years prior, Bruce Wayne created a sort of back-up personality in the event that he was driven mad by his enemies. However, that personality isn’t exactly the most well-hinged; which, for Batman, is saying plenty. Hence the yellow, red, and purple hobo-chic Batsuit Bruce is sporting. Oh, did I mention he also talked to an imaginary talking imp during this period? Let that stew for a bit. 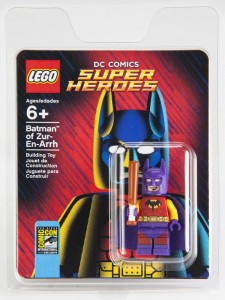 This version of the Caped Crusader also appeared in a story from the 1950s in which Batman encountered a super-powered Batman from Planet X who dressed in a costume similar to the one featured in Grant Morrison’s story. (Which begs the question, which version has a one-up on the crazy?)

I think my favorite aspect of the figure is the baseball bat accessory that comes packaged with the off-kilter Caped Crusader. Batman with a baseball bat. In a purple, red, and yellow costume. Um, I think I would probably wet my pants if I encountered him in an alley. Not even kidding. Patchwork Batman > Regular Batman in terms of terrifying.

This year’s SDCC will run through Sunday.